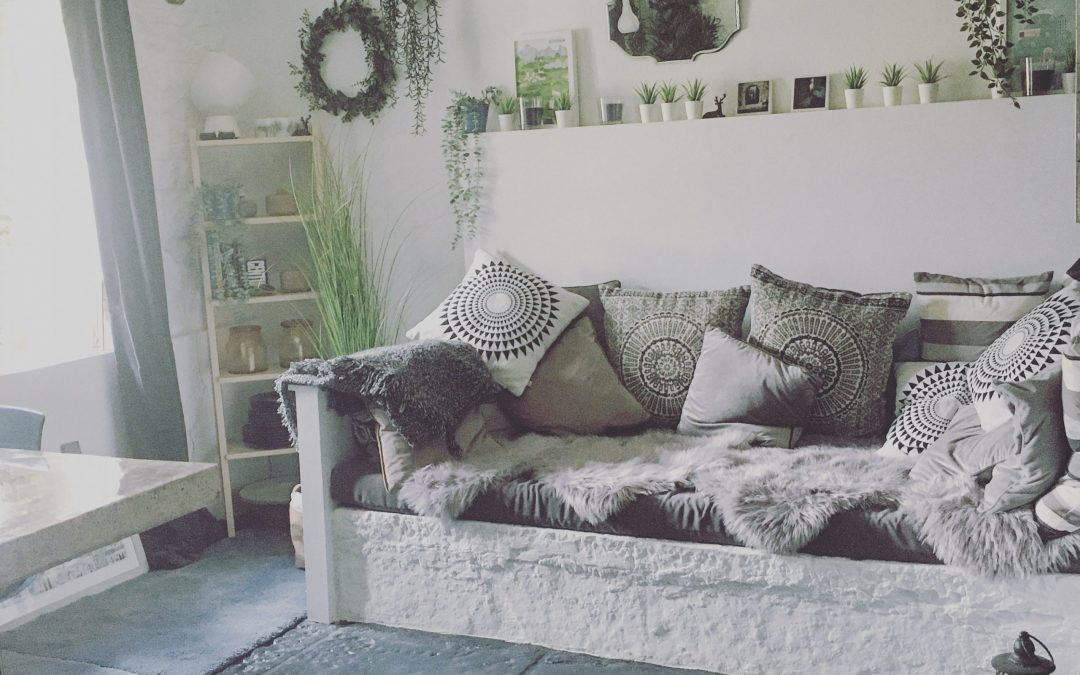 Recently, we’ve had our latest Workaway couple staying with us, Kaiti and David, a couple from Oklahoma. Like the other couples who’ve come to stay with us, they are on a sabbatical, travelling and working and embracing the cultural highlights of other countries. They came to us via Ireland, Portugal, Spain, Italy and southern Croatia and brought with them a healthy dose of mid-western American humour, friendship and many an interesting tale, hugely changing our recent perceptions of our neighbours across the pond.

If you’ve seen any of our other posts about WorkAway, you’ll have a fair idea of what it’s about. Basically, people travelling and would-be hosts join an online scheme. The “workers” showcase their skills and the “hosts” describe their project and if it all works out – as it has done so far for us – compatible workers and hosts communicate. The deal is that the people travelling agree to do tasks – we always clarify these in detail, in advance – in exchange for food and accommodation. Between us, we decided to focus on The Well Room, specifically the floor, as David has had experience of floor laying.

However, our floor is not a normal floor. Our builder has always put this job to the back of the queue – and we now absolutely understand why. There are a number of issues with it :

We looked at the potential cost of laying a new wooden floor and it started to become a bit more prohibitive than we had originally anticipated. There was also the issue of fixing the batons to level the floor. Because of the uneveness of the flags, the batons would have had to be cut to various sizes to ensure that the boarding, onto which the flooring would be fixed, would be level. A bit of a nightmare in itself, which would have required mathematical precision. And, time. Time which we didn’t really have as Kaiti and David weren’t with us for that long. Then we considered laying self-levelling concrete – sounded like a solution until we quickly realised that this should probably have been done way back, when the house was still a building site. Not when it was 95% complete. And definitely not when we had people staying as the room would effectively been out of action meaning no access to the kitchen or downstairs bathroom. Next solution we considered was coir carpet. This would have worked well in this room, but the same problems were still there, specifically the uneven base. And, where on earth would we have sourced coir here? Doable, but not in this WorkAway timeframe.

Suddenly, we realised that we were overthinking the floor situation, and we had the lightbulb moment. Back to the start… *PAINT* Yes, masonry paint. How much easier could the solution actually be? 5 litres of navy blue mixed and the floor covering was solved 🙂 However, before the floor was painted, another job was tackled – the concrete table. We’ve never found a suitable finish for this table and so it’s never been quite there.  The plinth has also been left unfinished as we were waiting to make the decision on the floor. 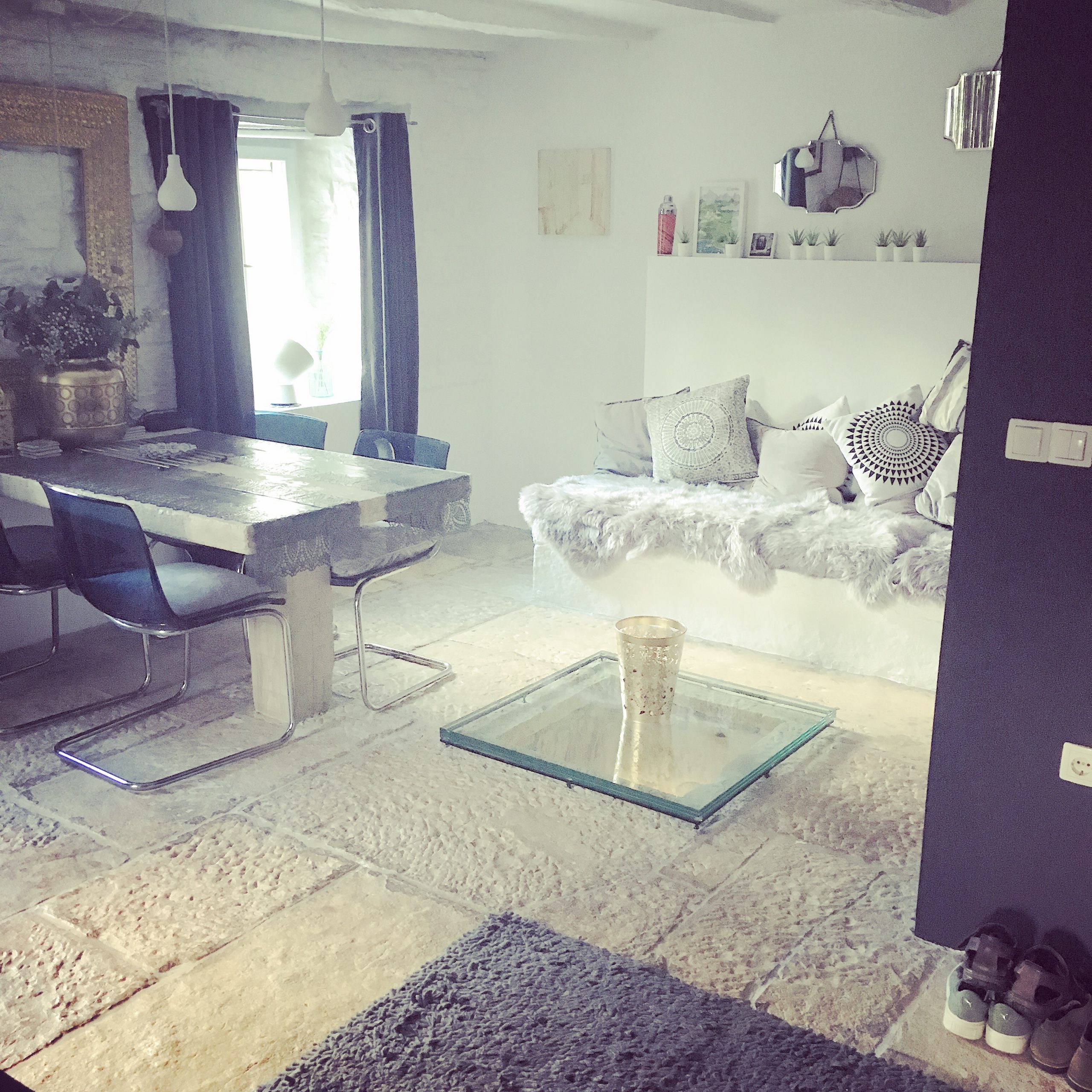 The dual issues with the concrete table and the floor can easily be seen in the photo above. The table plinth is still rough and unfinished and the top of the table is still too powdery, not having ever been treated properly. The floor is effectively like an outdoor patio – uneven and cold. And, you can see the height of the glass cover, which we now also need to take into consideration with any floor we lay. However, once the paint option was decided upon, we figured we could now finish the table – and this was when David revealed another string to his bow. He works with RESIN! So, without further ado, a trip to Koper was done and the resin tracked down – it’s much harder to source here, than you might imagine. 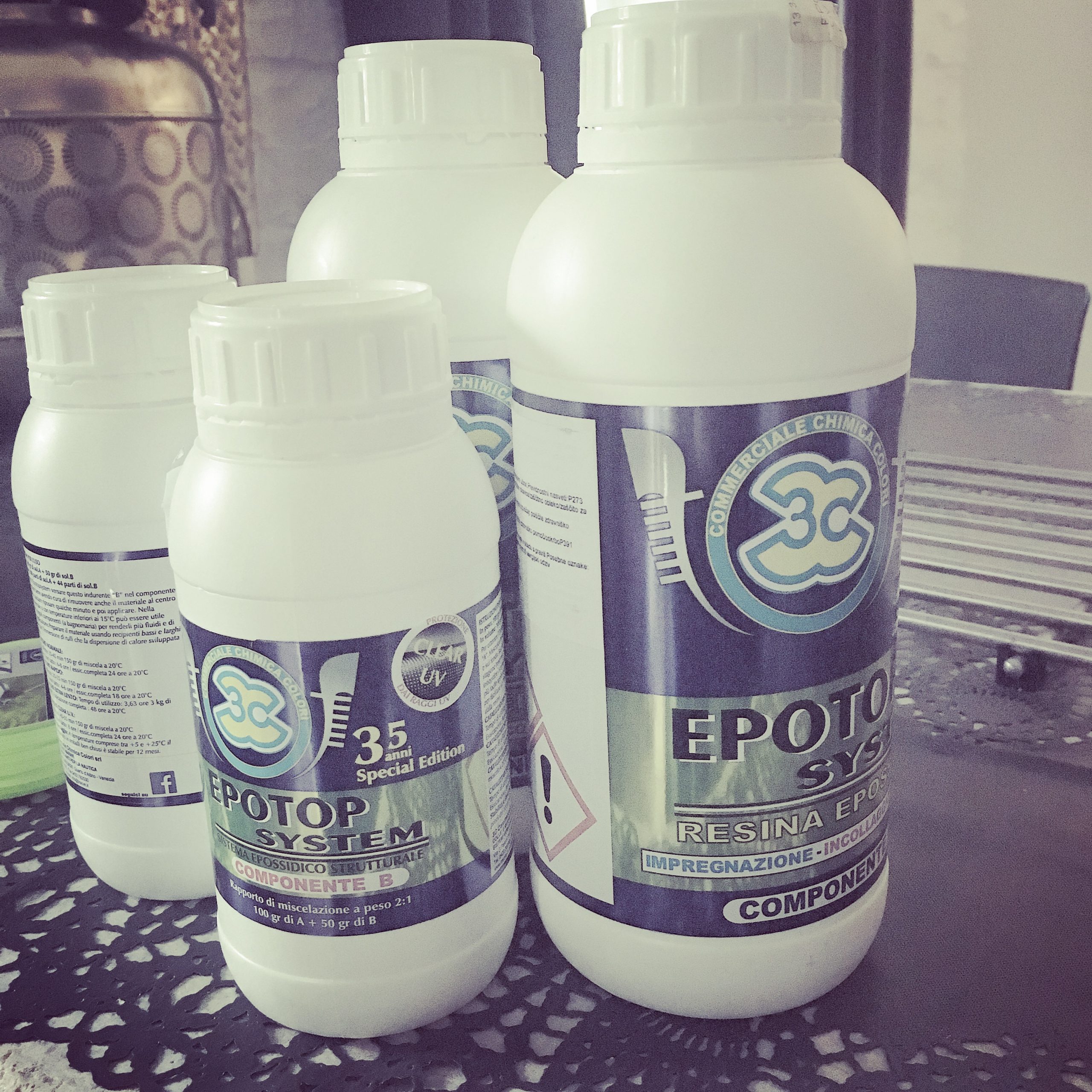 Armed with a blow torch, rubber gloves and the resin, David set about transforming the concrete table top – our timelapse video shows he set about it. We also bought wood, cut to size for the plinth – this was painted the same navy blue as the floor and silver profiles were sprayed gold, to finish off the edging. 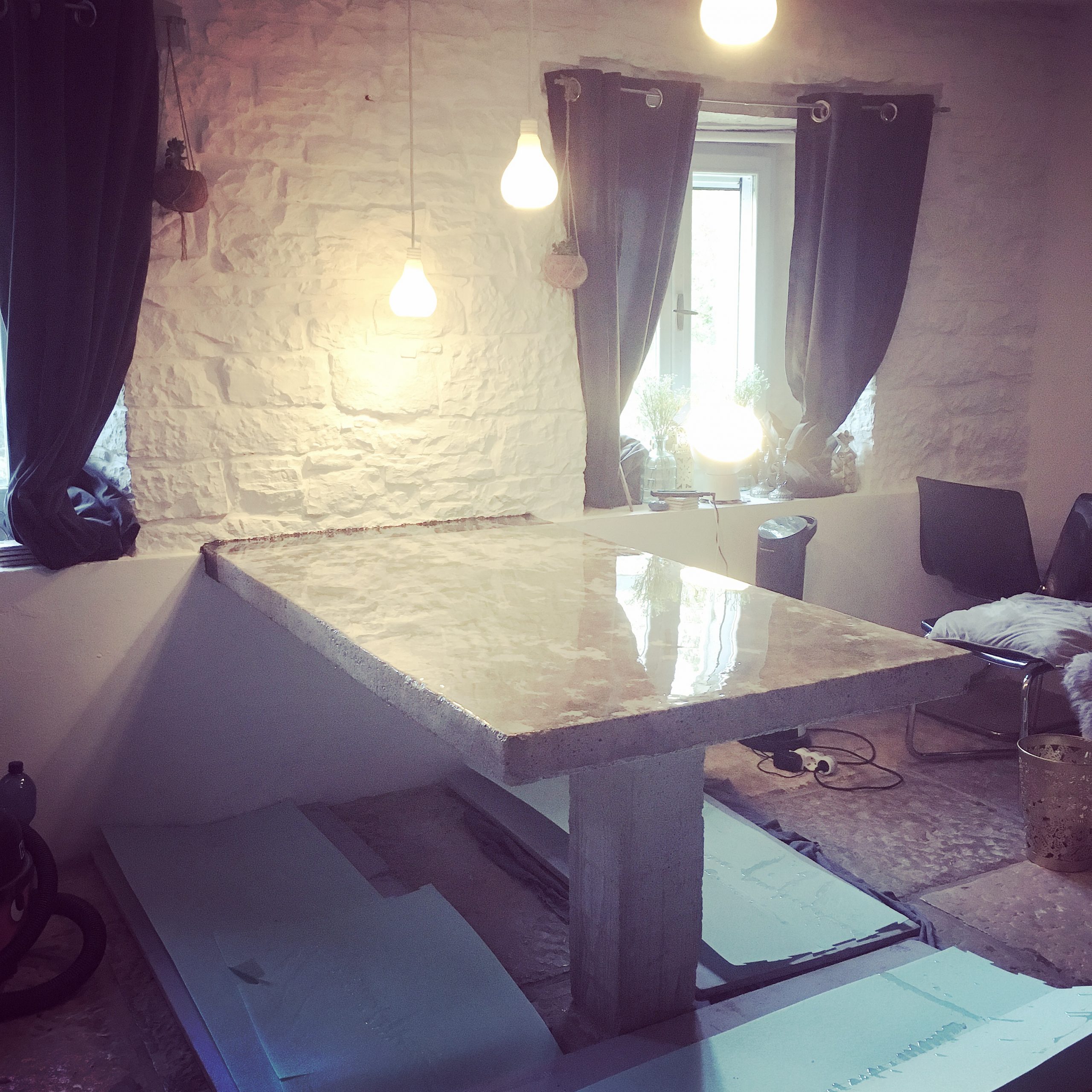 The resin top was left for two days to ensure that it was completely hardened – and wow, what a difference! Because we’d used other varnishes and finishes on the table, and had sanded it a few times, the overall effect is quite marbley, rather than grey polished concrete. Definitely not what we expected, but the resin has highlighted the colours in the concrete and it is just so beautiful. In places, it looks as if specks of gold have been scattered. Just stunning… 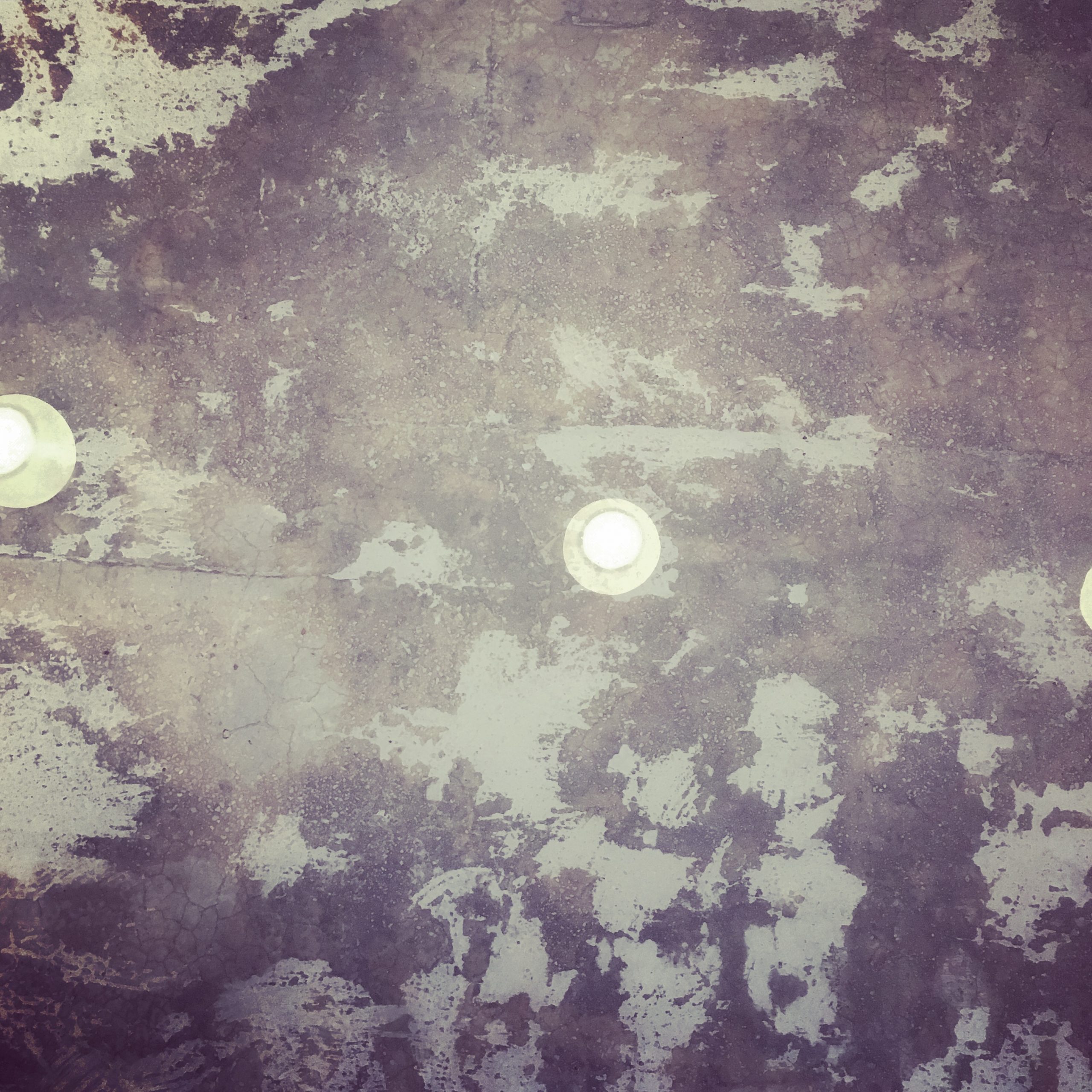 Once the resin had been applied, and dried, the floor was painted. Why we haven’t done this previously, is beyond me! The results are amazing and now the Well Room feels like a room. A proper, finished room. 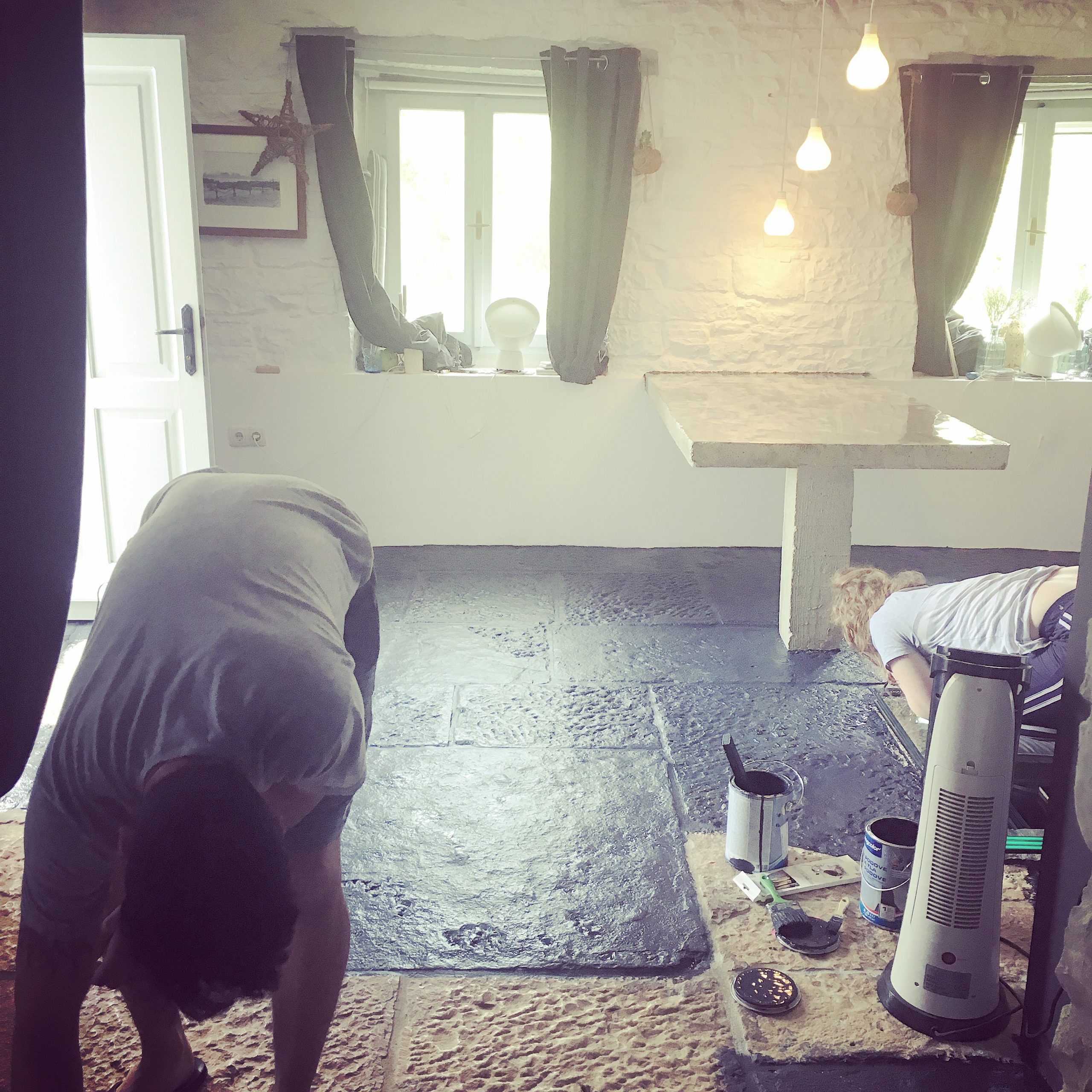 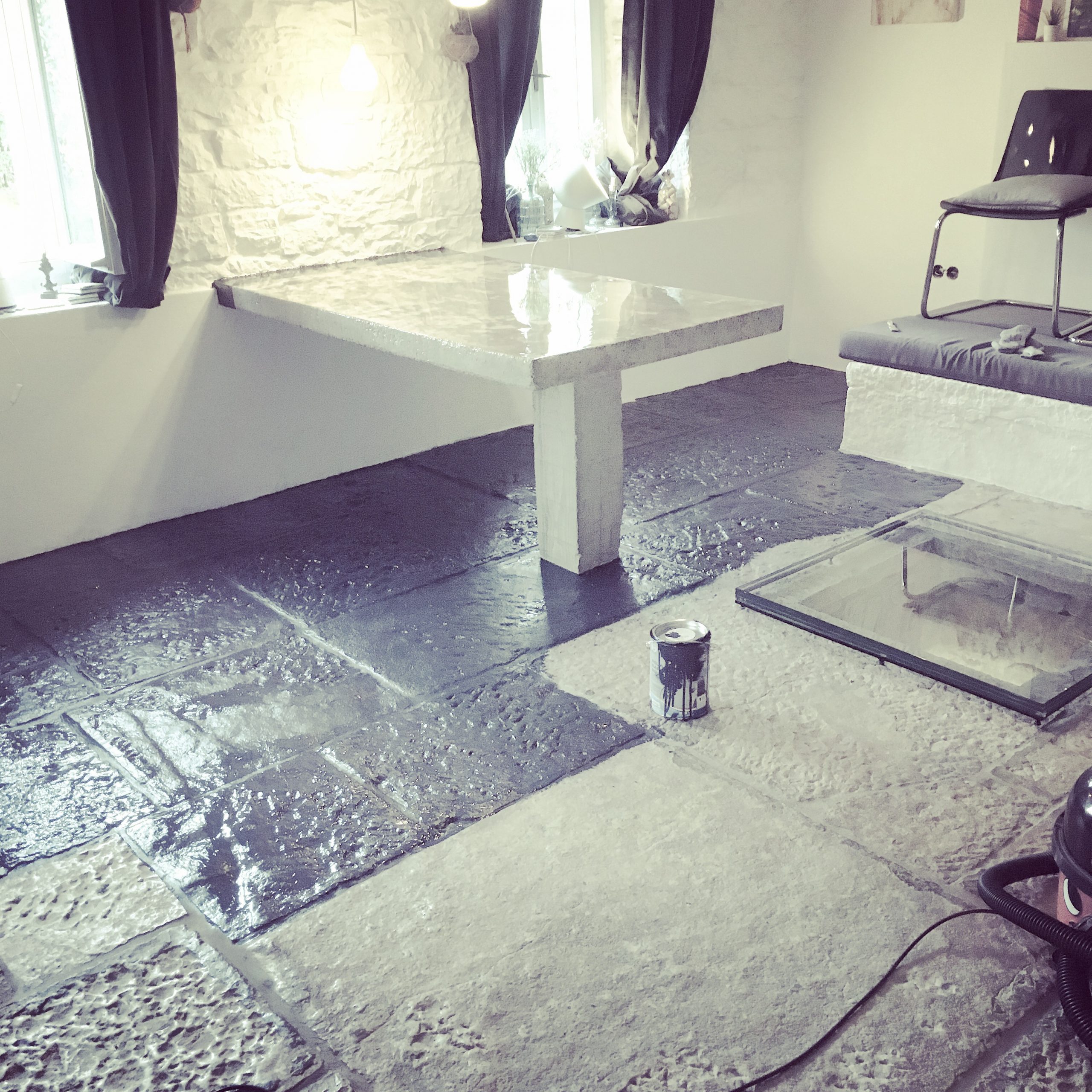 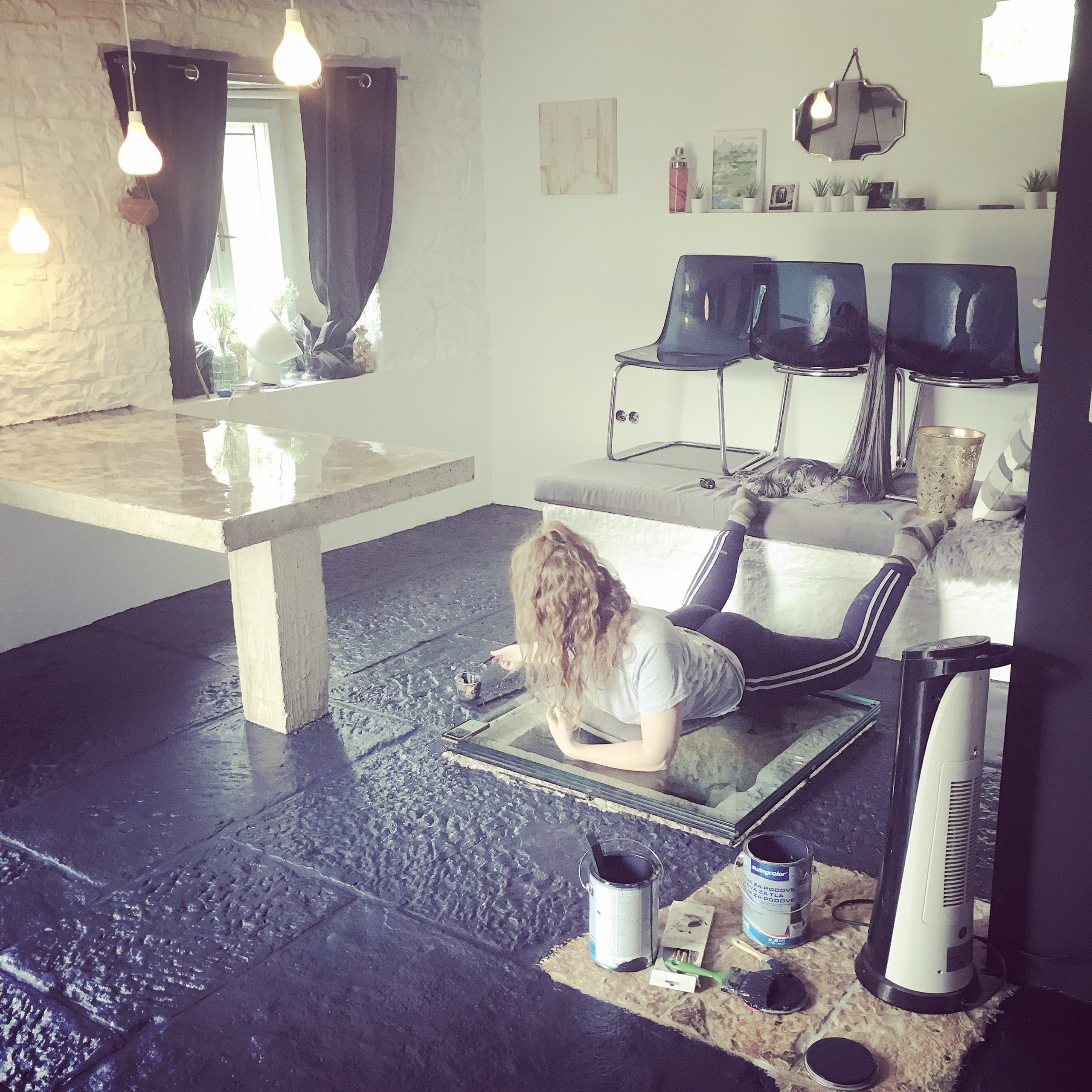 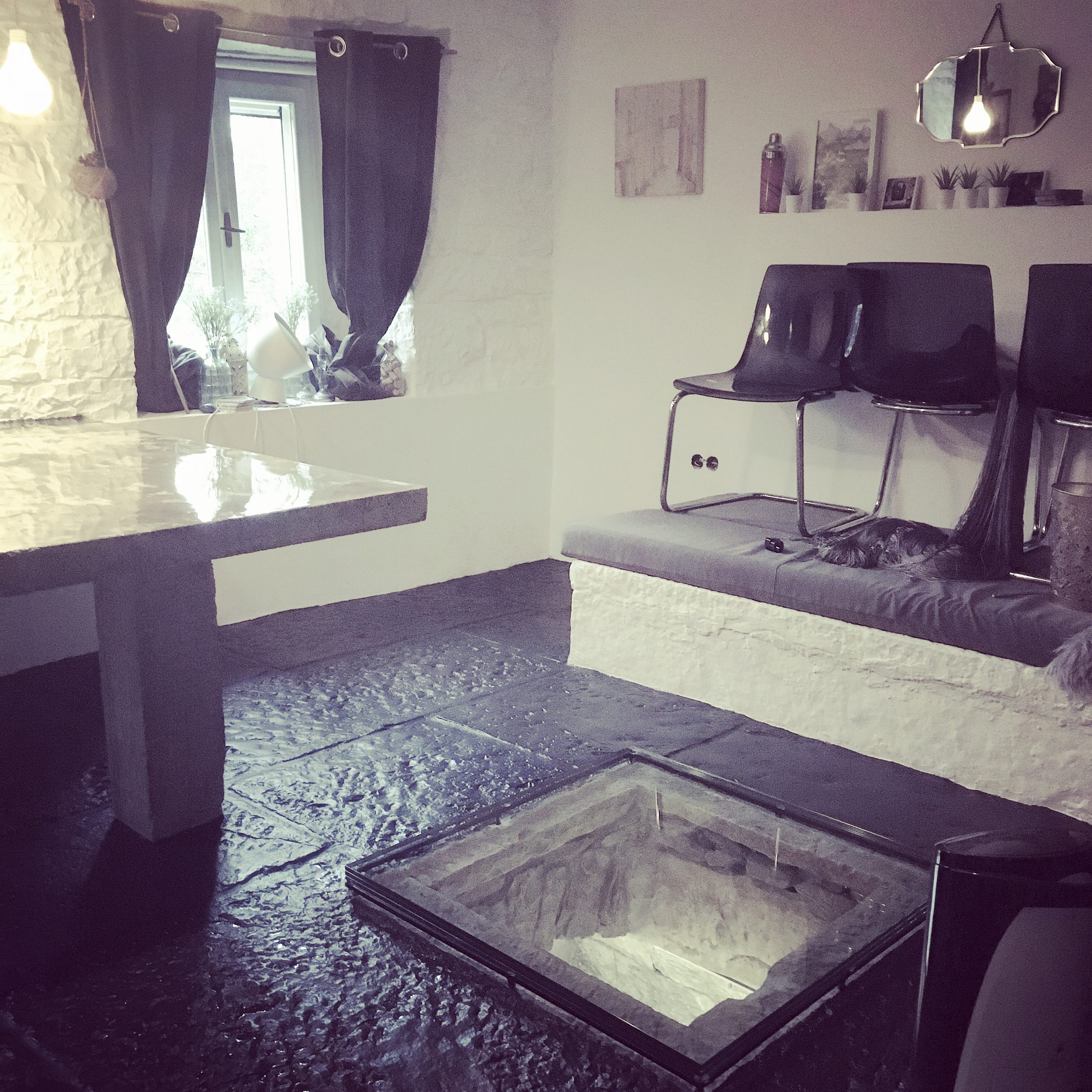 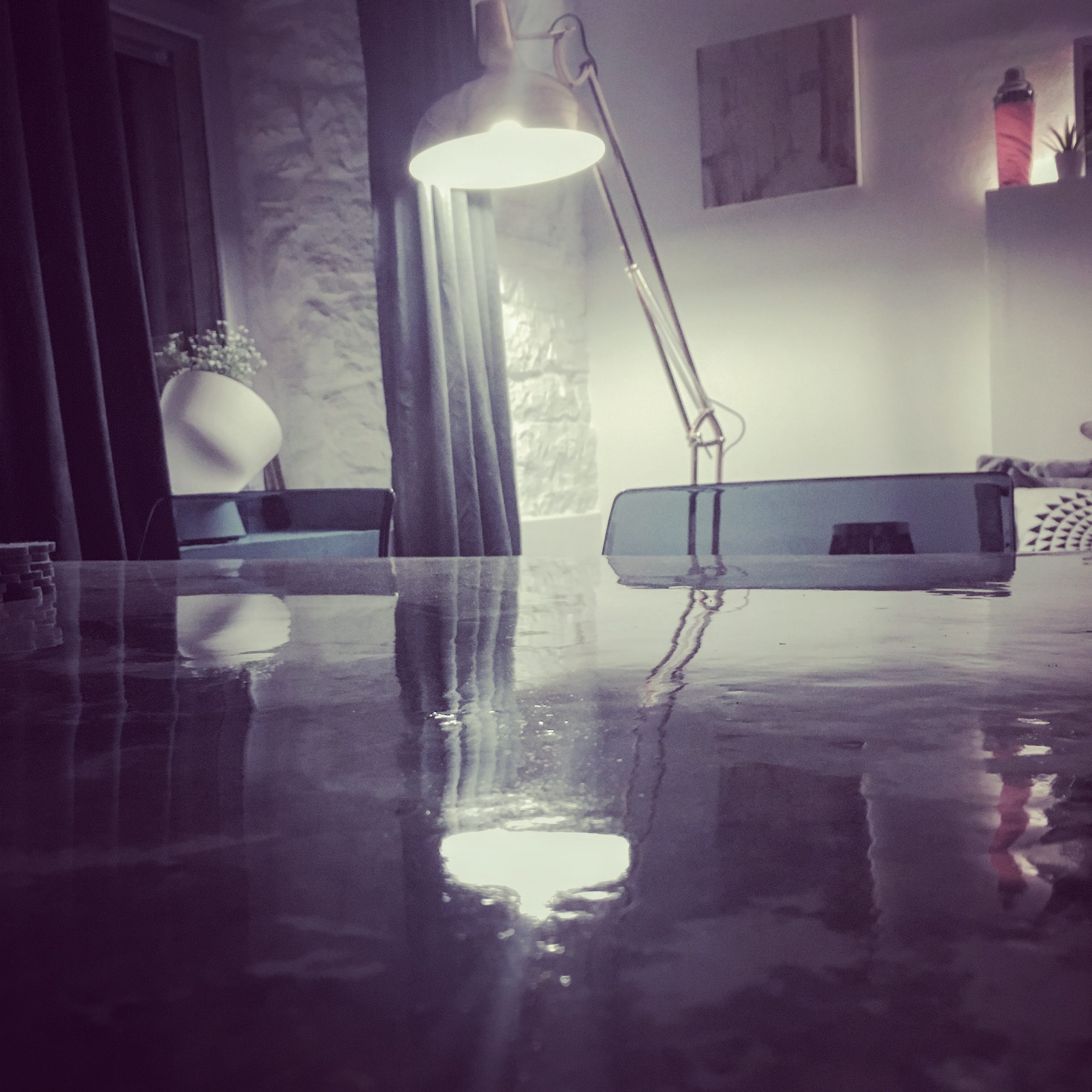 The final touch will be another couple of big chunky blue rugs to soften the floor and add warmth to the room. Not so long ago the Well Room was a storage room for builders’ tools and general mess. Now, it feels a very luxurious, warm room, with the deep navy colour scheme and touches of gold. The high gloss table top complements the well chamber when it’s lit up, and the soft uplighting on the back wall adds to the ambience. We’re now looking forward to cosy autumn evenings, with the thick navy velvet curtains drawn, and being able to finally sit down and eat at our concrete table. 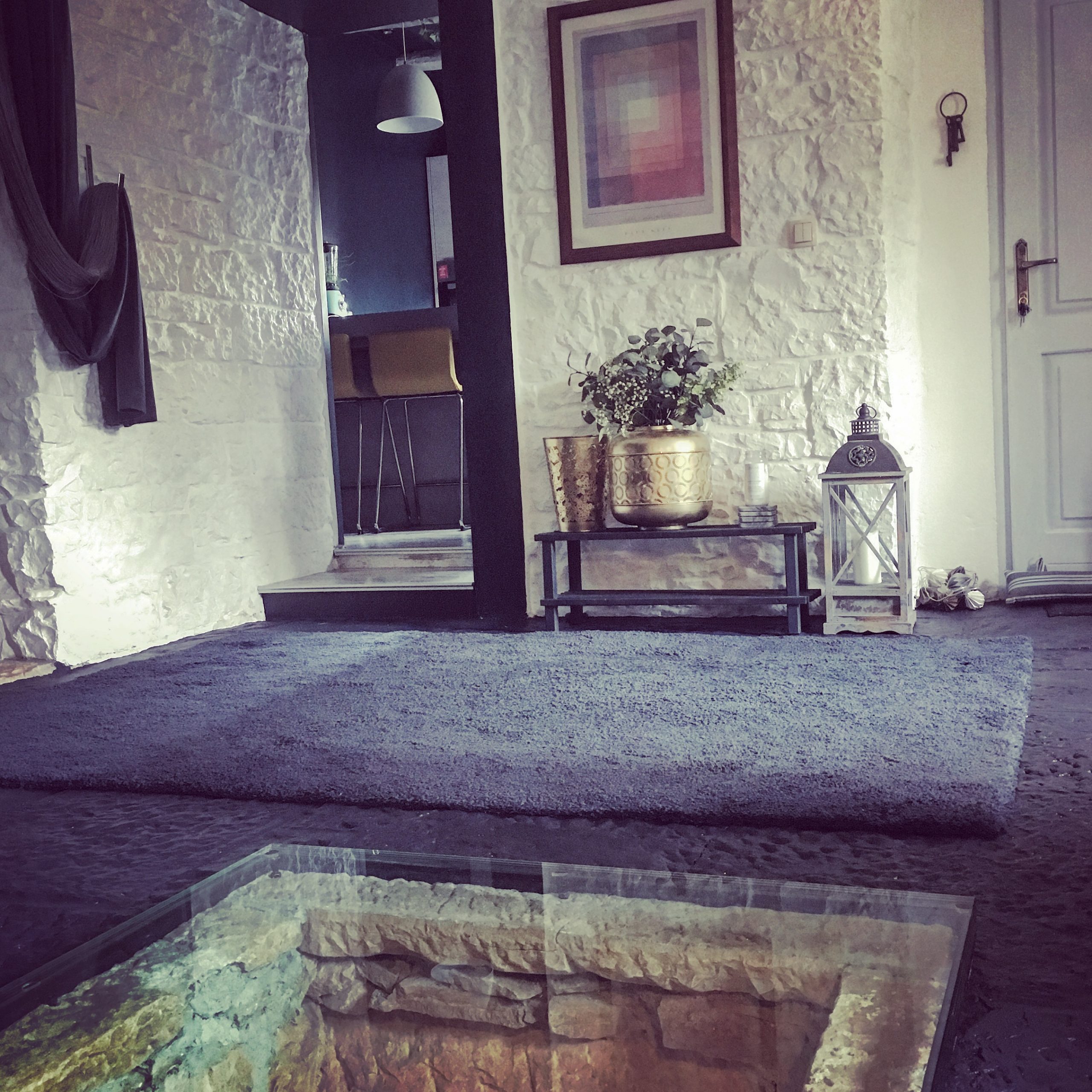 If you, or someone you know, fancies doing what we did and making the move to a place in the sun (well, mostly…), get in touch. Having now largely renovated the house, we think we’ve found our next doer-upper and so have started the process of marketing out Istrian stone house. It will be being listed on property websites, but in the meantime, have a sneak peek at the website we’ve designed. And if you’re interested, drop us a line… 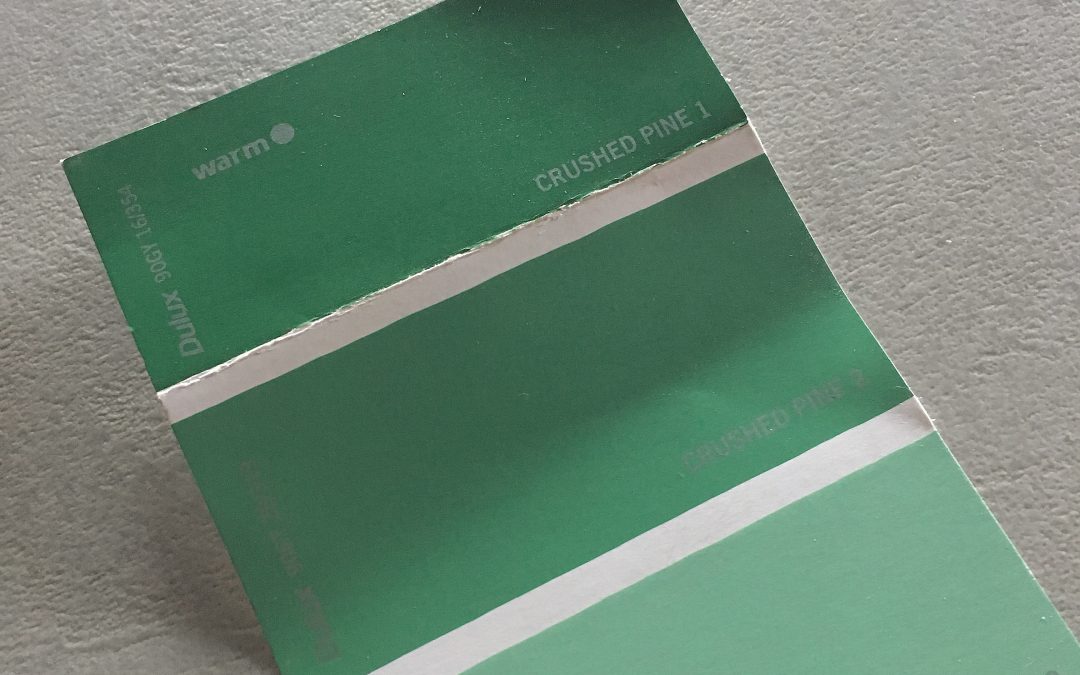 We’ve decided that the not-so-bottle-green bedroom wall, is staying. Despite it not being the colour I had in my mind’s eye, we’ve grown to really love it. And a bargain of a find in TK Maxx when we went to Graz, in Austria, sealed the fate of the colour – a beautiful green angle poise style lamp, which works really well against the new wall shade…

So, green has been on my mind recently. One of the next parts of the house that we’re intending to tackle, is the upstairs bathroom. Like the one downstairs, it’s small, but we’ve got a bit more floorspace to play with and it does have a natural space for the bath (where the sink and toilet currently sit opposite to each other). Because plumbing is already almost in the right places, we can hopefully fit a rainshower head over the new bath. I’d already found this image, and loved the copper/brass showerhead, but hadn’t really taken much notice of the green tiles…

The bathroom is going to be a real mix and match, in terms of style. The downstairs bathroom is now quite sleek and co-ordinated and so we feel that we can be a bit more adventurous with the other room. Once, what we thought was a negative – the size and shape of the bathroom – is now actually a positive, as it means we have to be a little more creative. Our thinking is that the bath will be quite a standard bath, but we’ll have a frame built around it as the footprint it will go into, is a bit of a cheese wedge shape, so the colour of this doesn’t matter so much. The sink and toilet will move to the wall under the window, and so these will be immediately visible, as they’ll be what you see as you enter the room. We do have a gorgeous enamel sink, rescued from a science lab in a school I used to teach in – one of those really deep, white, rectangular shaped sinks – and we have thought that this would be the new bathroom sink, mounted on a new plinth, with wall mounted taps over the sink. I have found out that you can actually paint these sinks, so that’s a possibility, if we can have it done professionally. But, whatever, I’ve been poring over Pinterest, and as ever, my interest has been aroused…

So, what do you think? Should we go green?