We’re currently in proper lockdown here in Istria. As of last week, a permit has to be applied for if you want to travel to a different municipality. Borders are closed so we can’t – and at the moment, definitely don’t want to – hop across to Italy to stock up on our favourite parmesan and proscuitto and so we’re driving over to Umag, on the coast, to shop at Lidl and Spar. Although obtaining a permit is relatively easy – we have residency here and so just need to email the appropriate office – we’re much happier not being out and about, preferring to live a much more self-sufficient lifestyle, at the moment. Rather than multiple weekly trips to a supermarket, we’ve decided that once a week, at most – less, if we can be very organised – is the best way forward. This also means we are finally getting to the back of our kitchen cupboards and rationalising the many packets and tins and bags of foodstuff we’ve accumulated. Rice, pasta, pulses – all there, and because a lot of it is at the back, and we can’t see it, more of the same stuff has been bought over time. So, now seems to be the right time, to actually start using it.

With a glut of tins of lentils, it was decided that a dahl was on the cards. I found this recipe from Deliciously Ella and liked it because a) most of the ingredients were available and b) a bit of coconut flavour is always welcome. It also looked easy -peasy – which it was – and appealed to my liking of chuck-everything-in-the-one-pot kind of cooking.

In the end, I only used one tin of coconut milk, because I used a jar of passata instead of chopped tomatoes and so there was quite a lot of excess liquid to cook off. I also used more of the spices, than in the recipe – probably double the quantities as we like our food to be flavoursome and spicy. The onions, when first sauteed in oilve oil, were also quite heavily seasoned with black pepper from the grinder. 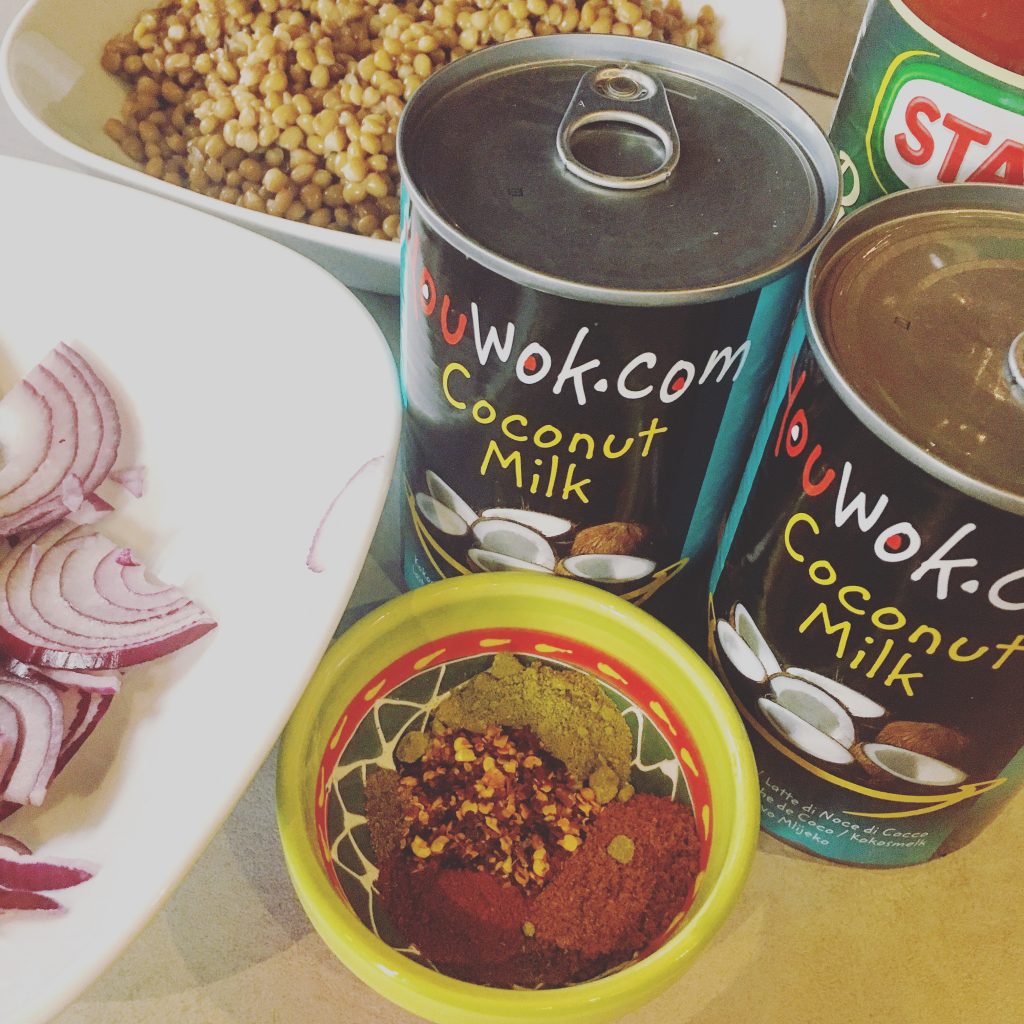 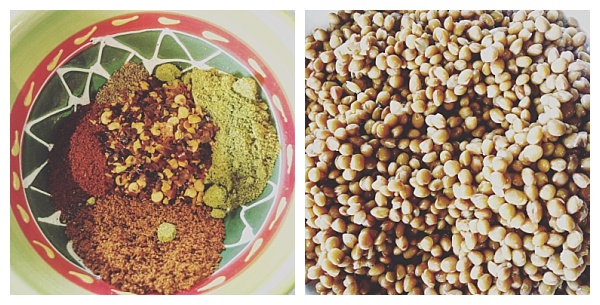 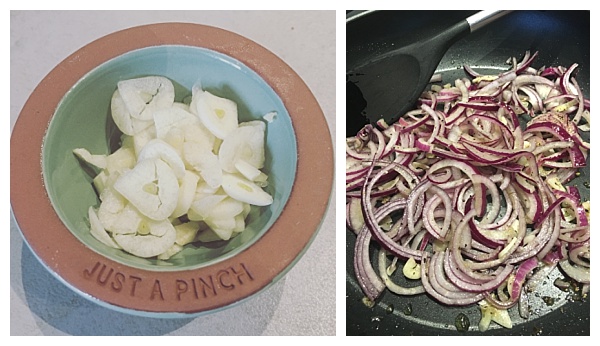 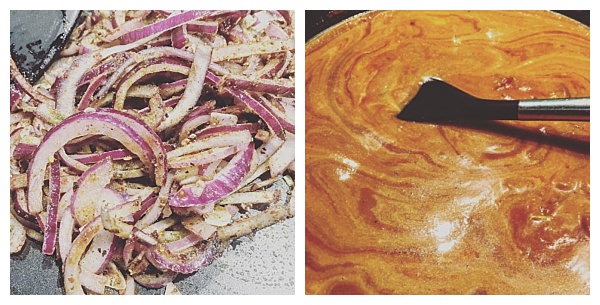 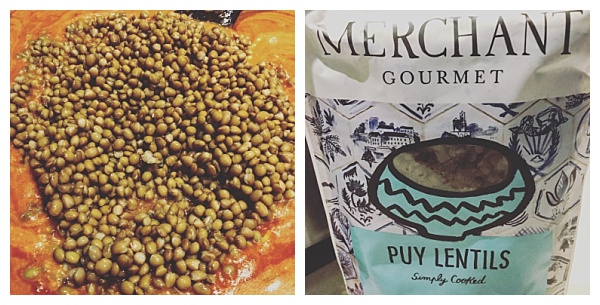 It really is the easiest thing to make – taking the recipe from Deliciously Ella (linked to above), I did adapt things slightly. I added a packet of black puy lentils to give it a bit more texture, and with hindsight, I maybe used too much passata, so that the final colour was more orangey than the usual yellowy-mustard colour of dahl. The chopped tomatoes, as suggested in the original recipe, would probably be better if you didn’t want it to be over-tomatoey. Last night’s was served with roasted new potatoes, which were cooked in a mixture of olive oil, spicy paprika and chilli flakes. We also had some cooling natural yoghurt on the side, although our herbs haven’t been planted up yet, and so sadly, no coriander as a garnish. That’s our next project – an old IKEA CD cabinet, which has been sprayed anthracite, and which is about to be planted up with herb seeds. Perfect compartments to keep them organised. 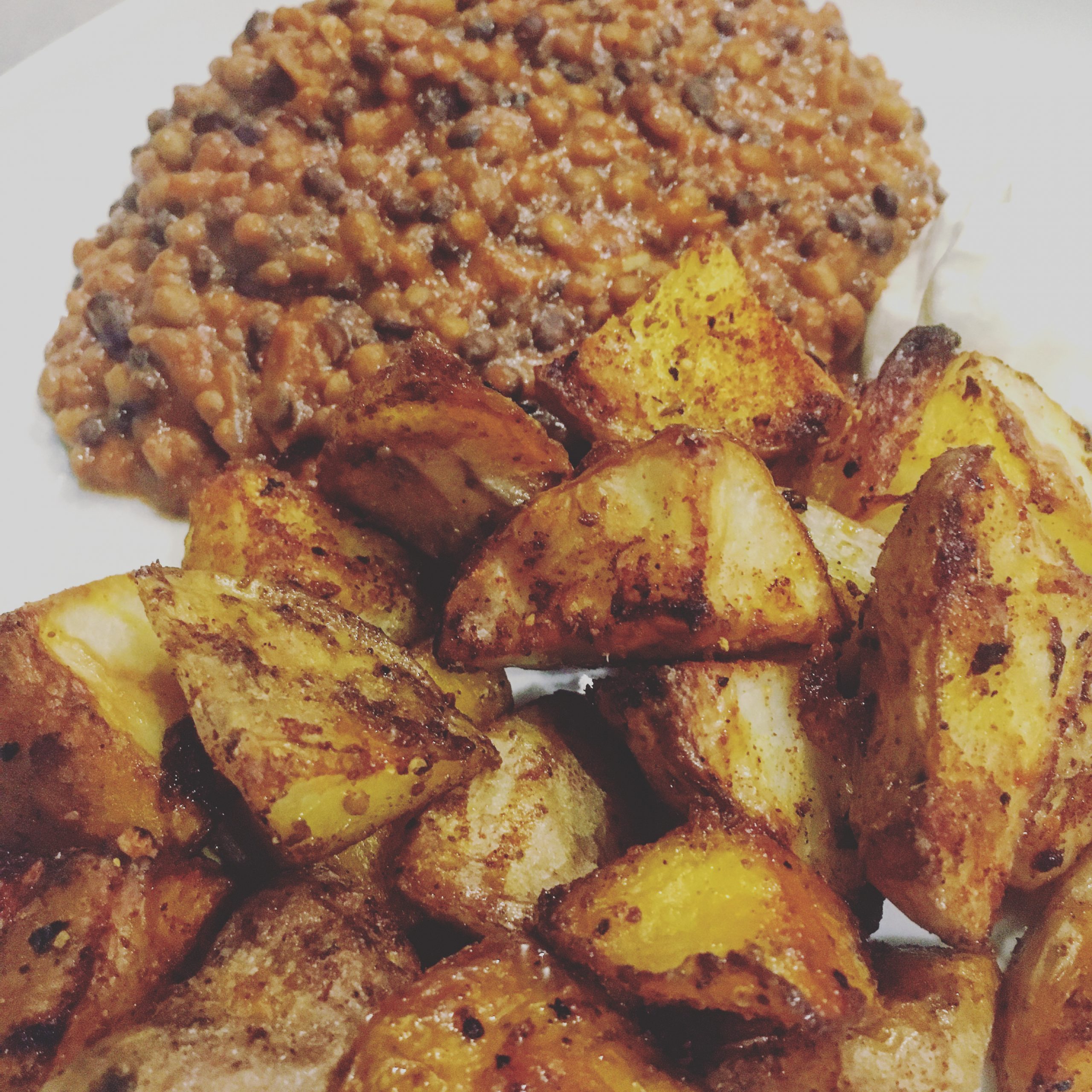 Because there is so much left over, it’s going to be the base of tonight’s dinner. In the fridge, there is a lovely Italian chorizo which will be fried off with a bit more spice and added to the dahl – and this time, I’m going to add a fair few sprinkles of turmeric to try and achieve that yellow colour. Nice to see the kitchen cupboard staples actually finally being used…