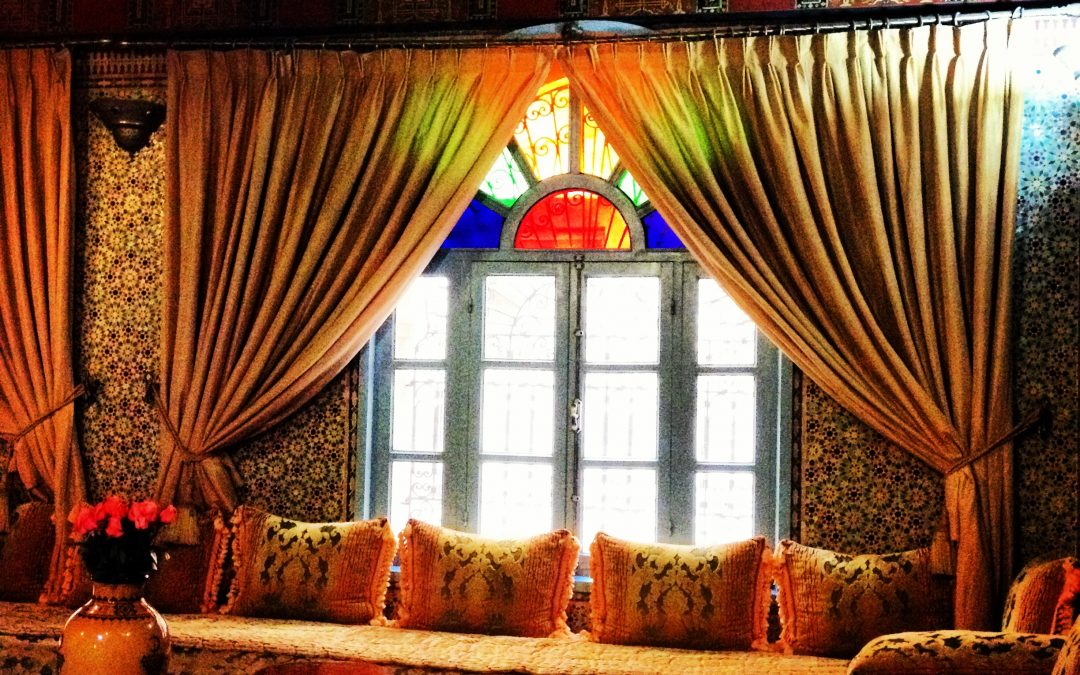 This is riad is quite simply, stunning.

Located right on the sea walls, and converted from a very grand 19th century residence, you just could not have a better place to stay in Essaouira. The entrance to the riad is breath-taking – hand carved thuya wooden ceilings, stained glass windows, mosaic tiled walls and floors, a central fountain, winding stone stairs, an open fireplace. Just jaw-dropping!

We stayed in January so the hotel was probably much quieter than in spring/summer months, and we were actually upgraded from the booking we made – and were thrilled to be allocated a suite on the third floor, which had real wow factor. It was huge, with the biggest bed we have ever slept in, an amazing bathroom – and then the highlight. Floor to ceiling (sound-proofed) windows which overlooked the Atlantic, and the waves crashing against the medina walls directly below. Everything in the room was spec’d to the highest standard – you could not find fault with anything. (Wi-fi is not available in the rooms, but is great in the entrance/reception, which is a huge space, full of comfortable sofas, so not having it in the room was not an issue).

The quality of the rooms does seem to be consistent across the riad, as we also managed a couple of sneaky pics in empty rooms, that had just been cleaned…

Breakfast is served in the roof-top restaurant, which has views on all sides across Essaouira and the Atlantic coast. What a way to start the day, as the sun rises! It was very windy when we were there, and the glass windows were closed – which made it even better to watch the seagulls swooping & circling outside, knowing that they weren’t going to snatch your breakfast!

There’s also a sun terrace with loungers, and up a little flight of steps, the highest point of the riad, with a few more loungers – perfect.

We had six nights at Riad Mimouna, and spending a little extra than we would normally have done, was the best decision we could have made – our flights from the UK were booked in advance, so were very affordable & Essaouira is not an expensive place for eating out/shopping so we felt we could justify a little more luxury. And, we cannot recommend doing the same, highly enough. You will NOT regret it!

(A word of warning – don’t be alarmed by the route to the riad. Essaouira is an ancient town, full of narrow, dark, cobbled alleyways, and this is how you get to Mimouna. However, it is also a very safe town, and once we got our bearings, and realised that as long we were just aware, there is really nothing to be alarmed about. It’s all part of the magic of Essaouira).

We flew, return, to Marrakech from Manchester by Easyjet for just under £300 (for two of us). After staying two nights in Marrakech, we travelled by coach to Essaouira, with Supratours, a four hour journey west (plus a 30 min comfort stop). Riad Mimouna was booked online (via Booking.com) and for a seven night stay (we booked a superior room but were upgraded, at no additional cost, to a suite) we paid 763 euros. This was definitely one of the pricier riads in Essaouira – we checked out a number of others which were less expensive, but just as beautiful – and we return in Jan 2015, now that we know the quality of accommodation generally in the town, we’ll be looking into one of the others, simply so that we have a different experience. On our return to Marrakech, to fly home, we actually took a taxi – this worked out at approx £40, but the plus side of this, was door to door, in less than three hours. 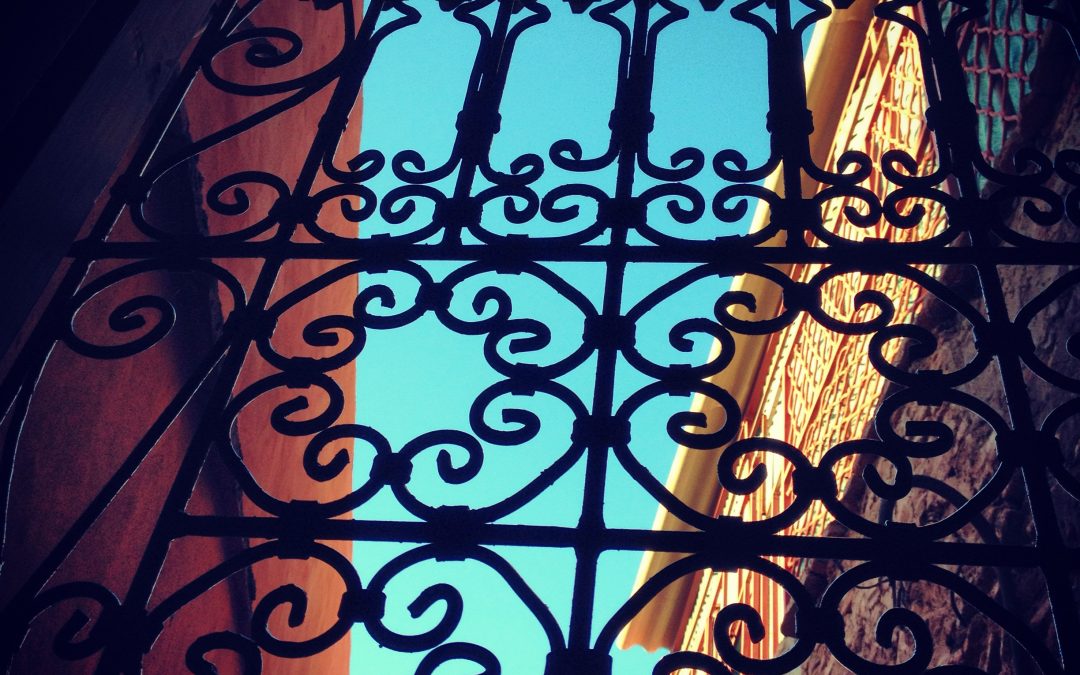 For anyone who’s not been to Marrakech, you need to know that everything you’ve probably ever heard is true. It is hot (even in early Janaury when we were there). It’s dusty and dirty. It’s a city of vibrant colours, aromatic aromas, constant hustle and bustle. There’s incredible wealth and the most appalling poverty. In the souks, you’ll find the most adept and skilled sales people. It’s a safe city, as long as you have your wits about you, especially in Jemaa el Fnaa, the main square & market place. The other thing that is true, is that it is a city full of the most polite people we’ve ever encountered – everyone smiles, everyone greets you like an old friend and everyone seems genuinely sad when you leave their stall, restaurant or riad.

We arrived on 2nd January and it was hot & humid, although the temperature drops considerably at night. The airport is a sight to behold – and just a tiny glimpse of what is to become in this very exotic city. We took a taxi from the airport to Marrakech – not a long journey, and inexpensive – well worth doing as public transport needs to be fathomed! The rules of the road just seem to be that there are no rules

Apart from if you’re a donkey, and you have right of way. All the time.

Riad Mouna, where we were staying for two nights before heading west to Essaouira, is right in the heart of the medina, which is closed to most* traffic, so we were dropped off outside the walls and taken on foot to the riad. This could be quite an alarming experience, especially at close to midnight, but take a deep breath & go with it. It’s worth it! I’ve never had such an introduction to a city before – but dragging your cases through the medina streets doesn’t half prepare you for what’s ahead!

(*except scooters, donkeys, vans loaded with a million things destined for the souks strapped to the top/sides/next to the driver. So, not closed to traffic at all. Just to let you know…)

Riad Mouna is right at the end of an alleyway (off the street leading to the main square) – once off the main drag, and the noise, it’s surprisingly quiet. Apart from the children playing football – which is what every child in Morocco seems to do

The entrance to the riad is through a very small doorway – remember to stoop, and then this…

Although compared to some riads it’s quite basic (!), it is beautiful – full of Moroccan artefacts and intricate mosaics. There’s also a lovely roof terrace where breakfast is served – very traditional with pancakes and juices and wonderful coffee, with a view over the rooftops of Marrakech and away to the Atlas Mountains.

We spent two days exploring Marrakech – and to be honest, as amazing as it is, I don’t know that I could have done any more. Obviously, in the medina restaurants, alcohol is a no-no – we did hear about the “coca-cola rouge” but that was after we’d left – so advice would be to stay in riad or a hotel where you can get alcohol (and in most you can – but sadly not Riad Mouna, as we discovered), if you think a dry holiday is out of the question. However, it wasn’t due to lack of alcohol that meant two days was enough – it’s the fact that it is an assault on your senses and we just needed to get to Essaouira and soak up the laid back, hippy vibes

So, here it is, in all it’s noisy, colourful, dramatic, hot glory. Marrakech…

And, yes, we did buy the beautiful rug pictured above. But that’s another story, for another blog 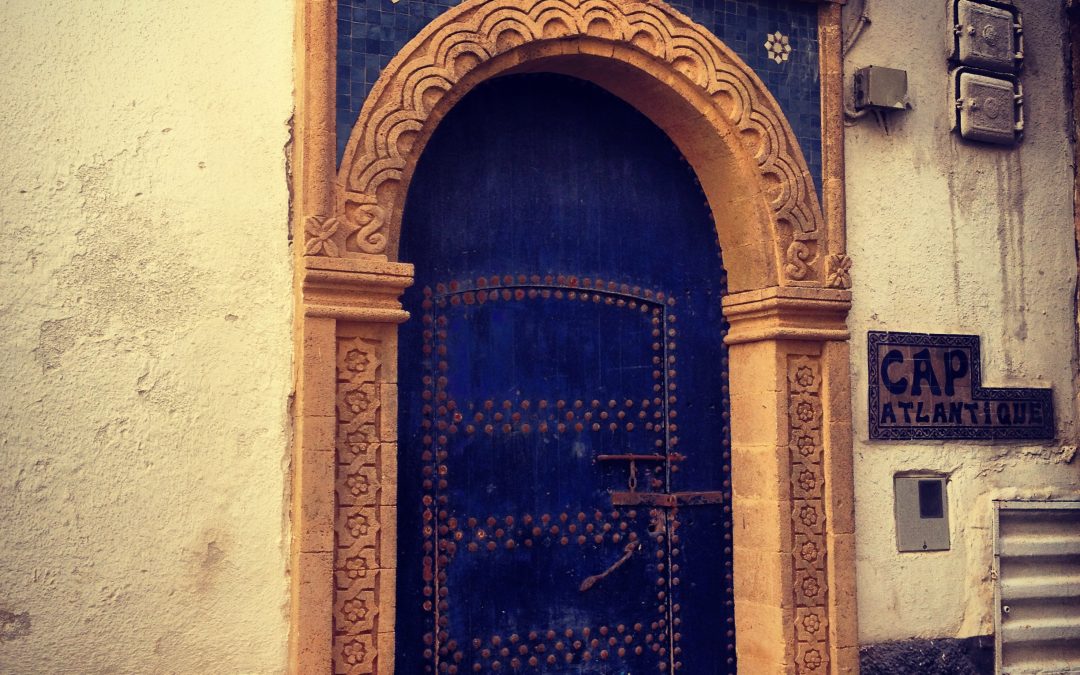 That’s right. A blog about doorways. But not just any old doorways, you understand. These are Moroccan doorways. Some astonishingly elaborate, some mosaic framed, some brightly coloured, some literally hanging off their ancient hinges, some huge, some hobbit like. But all different and all beautiful and all just so, well, Moroccan…

And every doorway, quite literally, is a portal into an amazing, incredible, wonderful world… 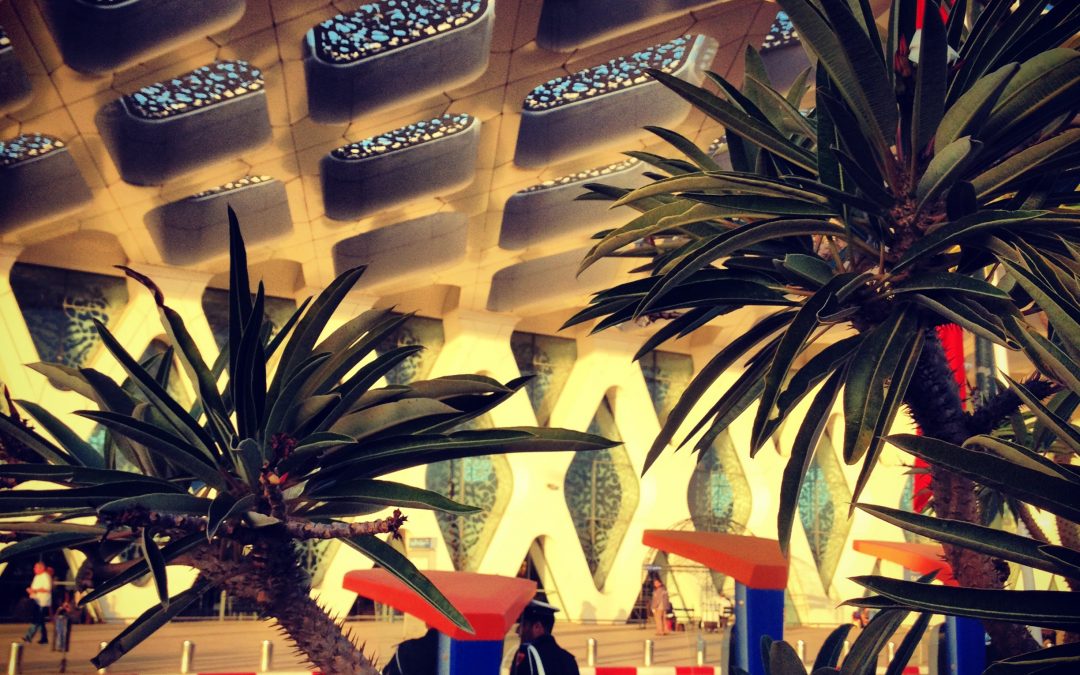 We’ve been so lucky recently to be able to do a lot of travelling and so have seen quite a few airports. Much are much of a muchness. There’s often very little that really sets one airport apart from another. But, the latest airport we flew into and out of, is definitely one of a kind. Marrakech Menara…

A very fitting introduction to one of the most wonderful countries we have ever visited.

← The Angel of the North Moroccan Doorways →