Marrakech is absolutely everything we ever thought it would be. We’ve only ever visited in January, as a stop over before journeying across for a longer break on the western coast, in Essaouira. But even in what we would consider to be the depths of winter, that pretty gloomy time just after New Year, it is hot, vibrant, colourful, noisy, chaotic and totally beautiful. Mostly. But more of that later. Wherever you are staying, the point to gravitate towards, is probably Jemaa el-Fnaa, the main square and market place in the medina quarter (old city), which transforms from dawn to dusk.

During the day the square is full of sights. You’ll see monkey trainers who have trained the animals to climb all over tourists, snake charmers and henna tattooists. Whilst you can generally just watch and photograph from a distance, you do need to have your wits about you in the square – we have seen unsuspecting tourists end with a monkey on their shoulders and a friend of ours, who got a bit too close to a snake charmer, found himself with a snake around his neck and having to pay to have it removed. The tattooists can be quite agrressive, too – I had my hand pulled by one, and she had quite a tight grip! Thankfully, I did manage to wrangle my hand free. You’ll also see dentists, who proudly display the teeth they have recently extracted – whilst at the same time offering their dental services. The square is also filled with traditional musicians – they are very mesmeric, and again, if you want to watch and listen, rather then hand over money, keep your distance. You will also find numerous stands selling the most aromatic foods and spices and drinks – a great way to fill yourself up during the day. 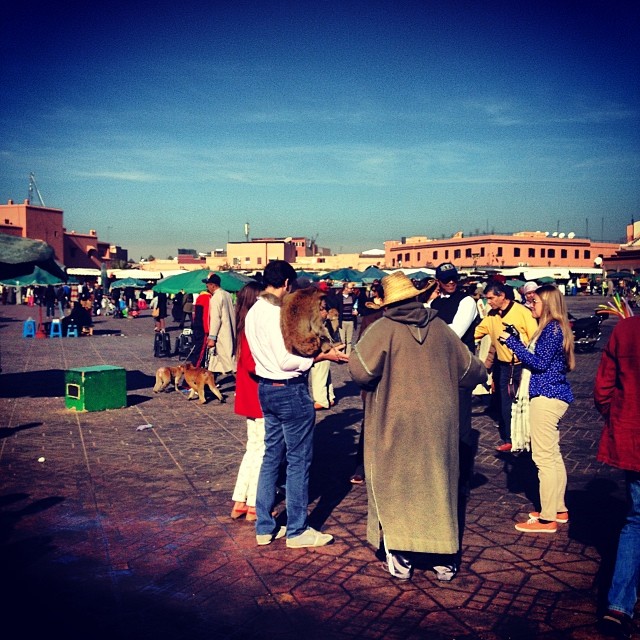 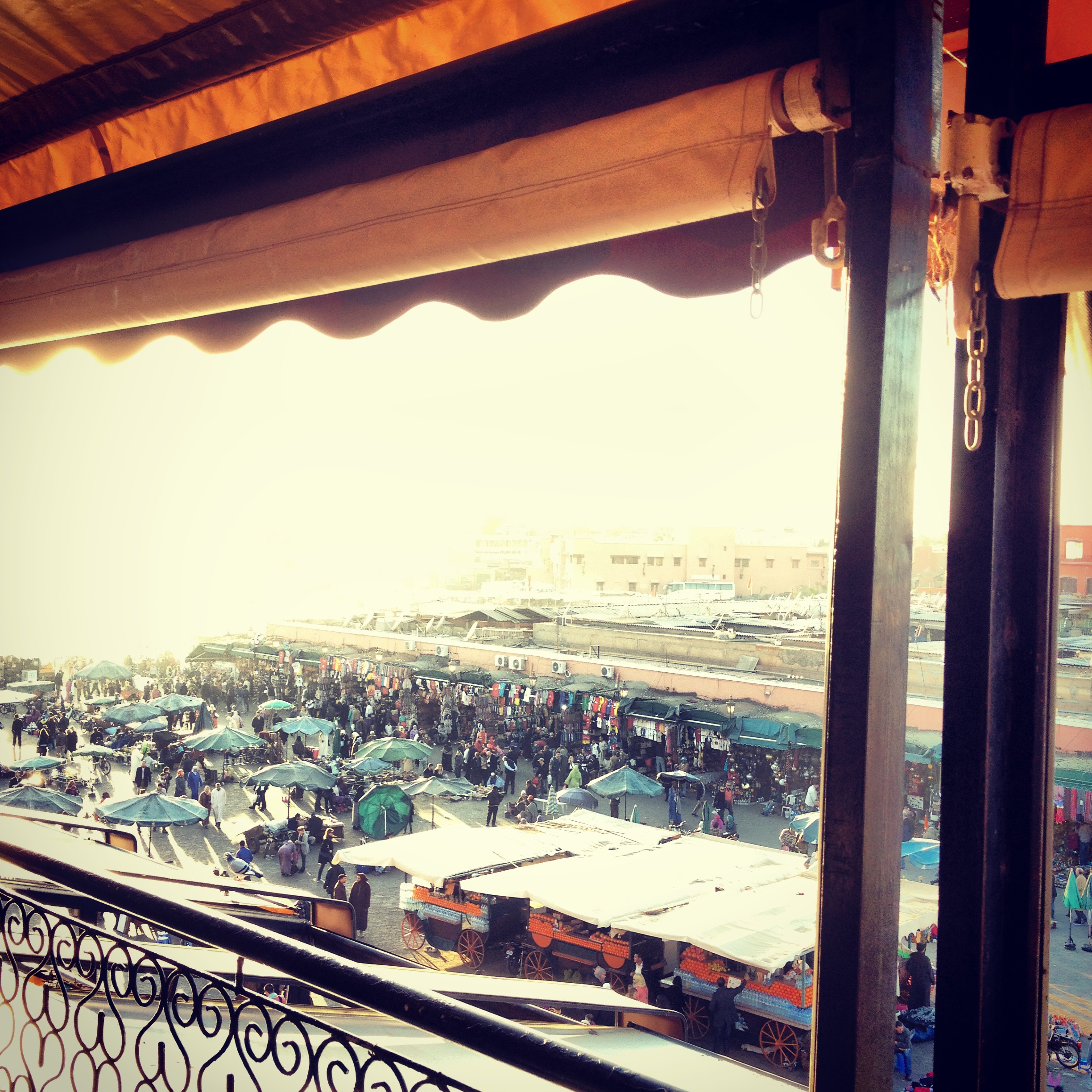 If the clamour and noise of the square becomes a bit overwhelming, which it can, it’s easy to escape and find yourself surrounded by peace and quiet, not too far away. Today, the city walls are mainly to mark the limits of the medina with other areas of the city, but in years gone by there were defensive ramparts, protecting the medina from invaders. To cope with attacks, the Sultan of Marrakech, Ali Ben Youssef, around 1120, decided to erect strong 9m high walls, to defend the city, forming a circuit of approximately 10 km around the city, originally including as many as 200 towers and 20 access gates. 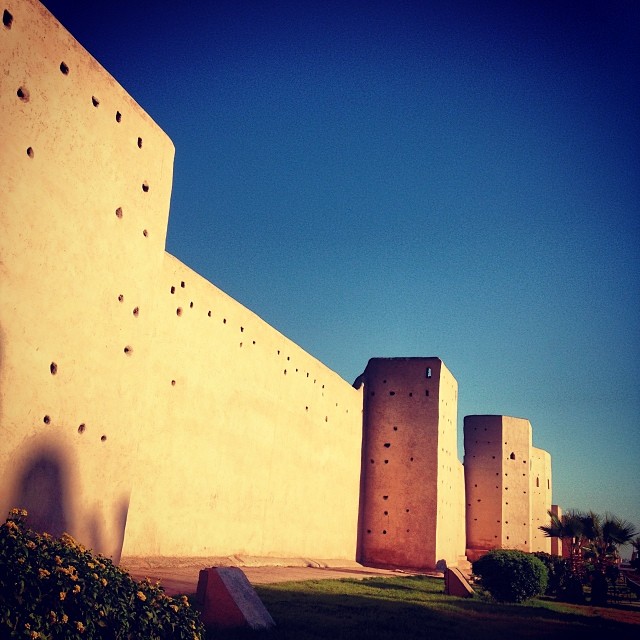 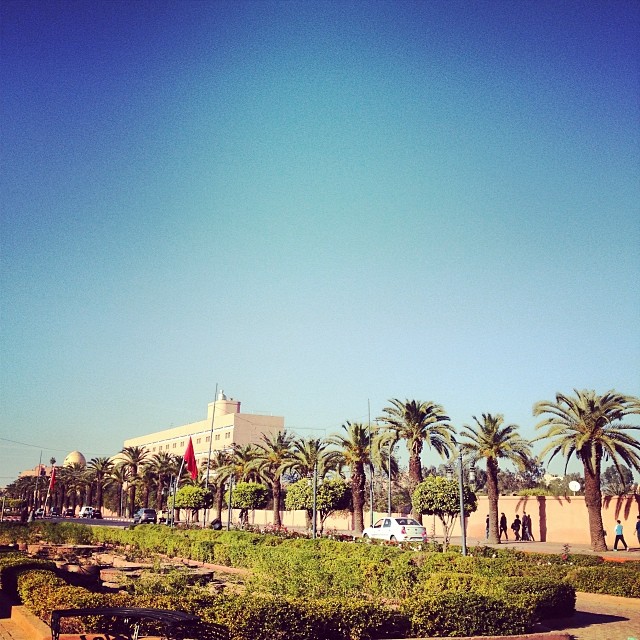 At 70m high, the iconic minaret of the Koutoubia Mosque is the highest structure and the largest mosque in Marrakech. Along with the square of Jemaa el Fnaa, The Koutoubia, is a symbol of Marrakech. The Koutoubia Mosque is located on the edge of the medina at the beginning of Avenue Mohammed V. The easiest way to reach it is on foot from Jemaa el Fnaa, as it’s just 250 meters from the main square – but once you are in front of it, you feel a world away from the madness of the square. 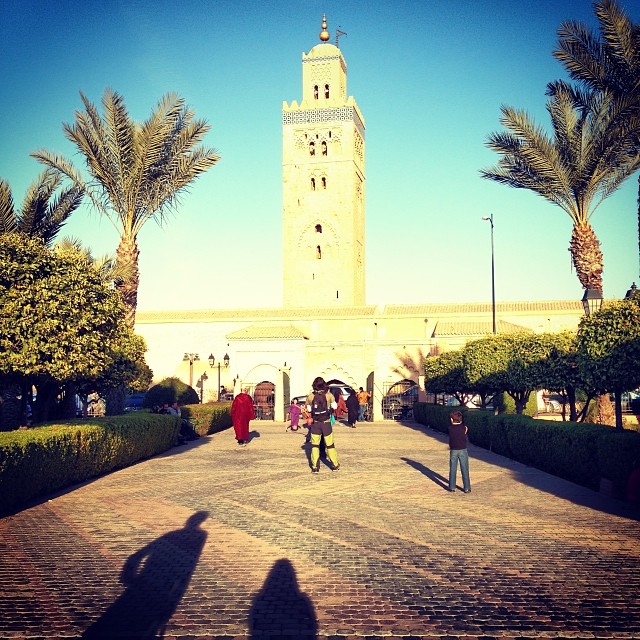 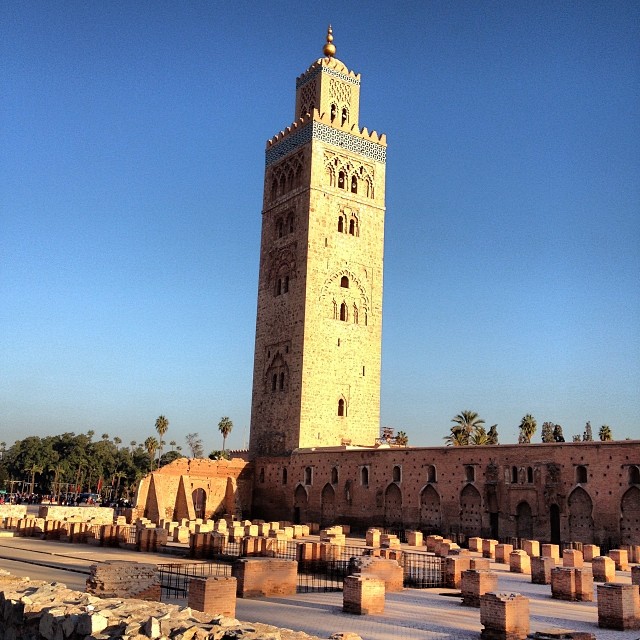 The minaret can be seen from all across the city, and beyond – on a clear day, from as far away as 25kms – and we had a gorgeous view of it from the roof terrace of our riad. 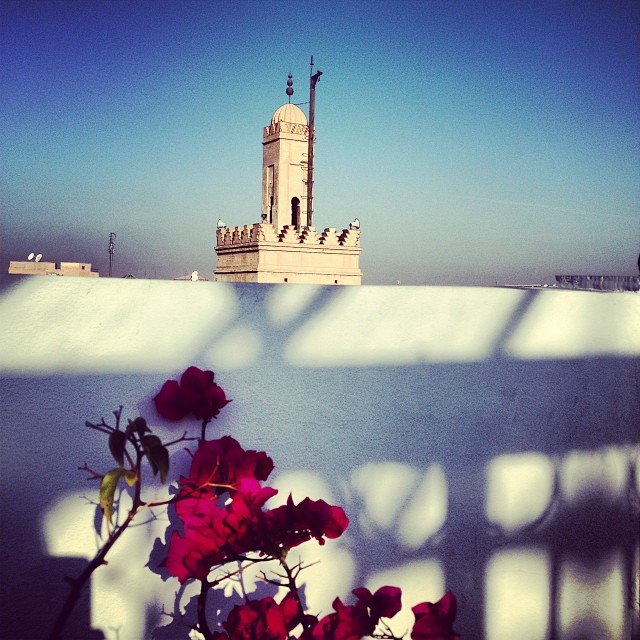 At dusk, Marrakech’s main square transforms and the morning stalls disappear to give room to food stands where you can have dinner, surrounded by Moroccan musicians playing traditional music. Although locals certainly frequent the square and its stalls during the day, they are much more in evidence at night and so it seems a lot more authentic. Not just a tourist trap. Smoke rises up from the stalls and the aromas are just mouth-watering. If you don’t have dinner plans, the food at these stands is tasty, very cheap and very popular. 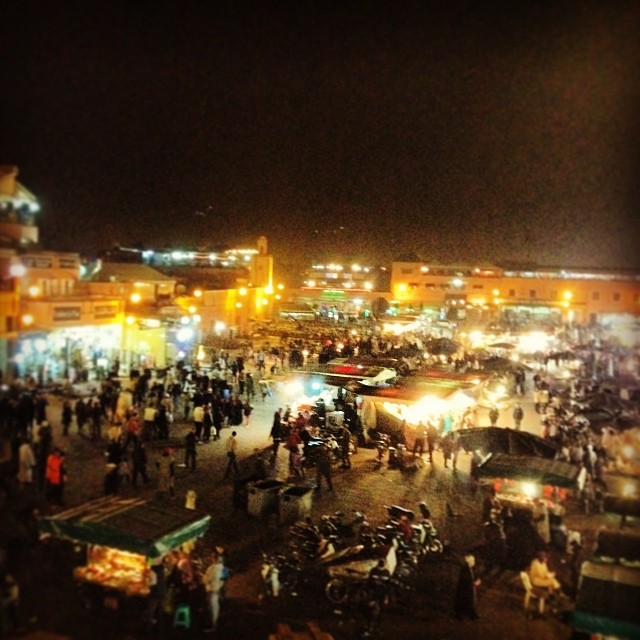 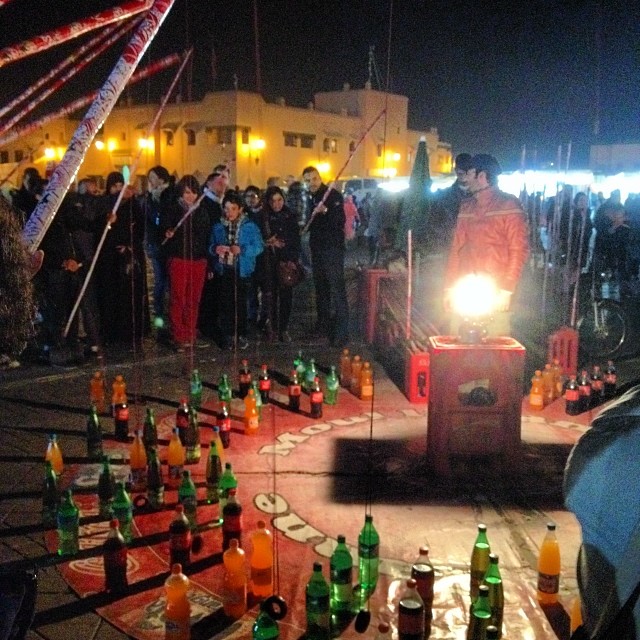 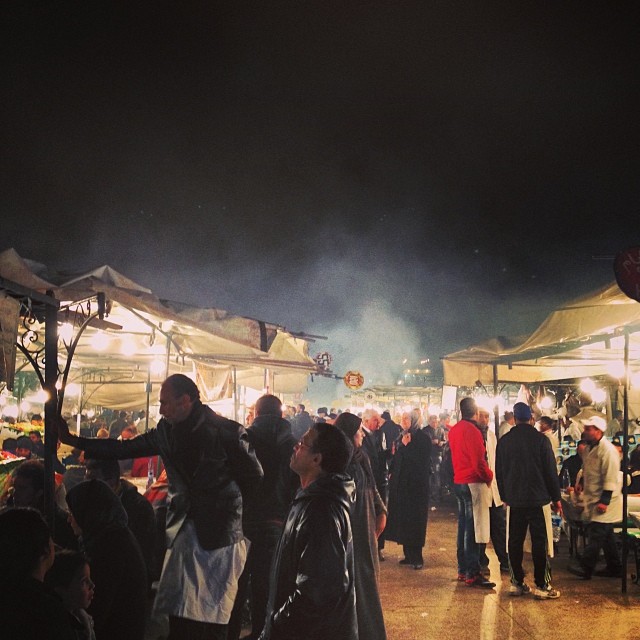 Around the medina, you can lose yourself in shopper’s paradise, especially if you love a haggle. You can wander the souls to your heart’s content and if you are determined to make a purchase or two, this is definitely the place to do it. However, it’s very easy to get lost in the souks. The narrow alleyways – with overflowing items that snake off to more thin passageways with even more goods – can all start to look very similar, and as many are covered too, it can be more difficult to get a good idea of where you are. Getting lost is generally part of the fun of exploring the souks, but if you really need to ask somebody for directions, our advice would be to try and approach families or females as opposed to younger men. The reason for this is that it’s a lot more common for younger males to make a friendly offer to take you to where you want to go, and although this might seem like a blessing at the time, it often ends with you paying a substantial ‘tip’ – after possibly having been carted to several stalls, from where the ‘helpful’ stranger is trying to score commission on a sale along the way. We know this from experience – but thankfully in our case, all ended well and we did make a rather beautiful purchase of a Berber rug. Which we hadn’t intended to do, and it’s a blog all of its own, because it was a bit of an adventure… 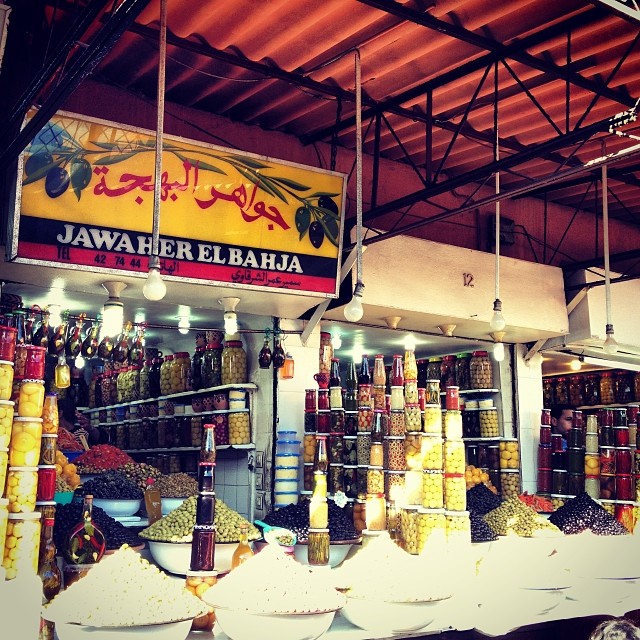 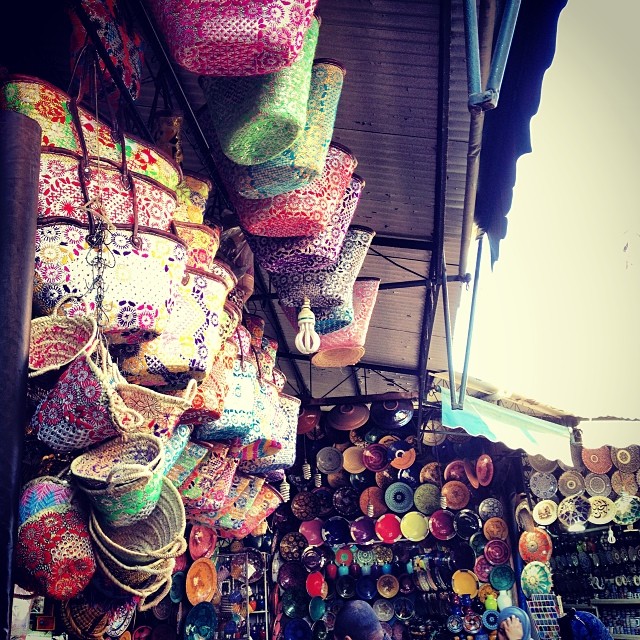 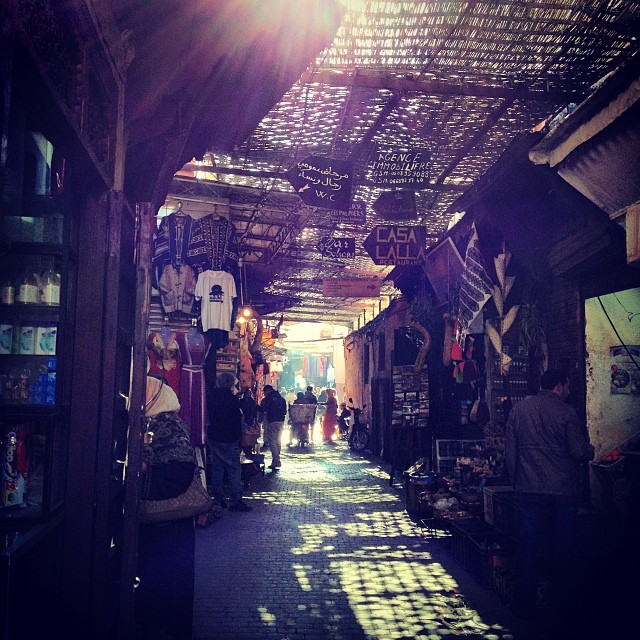 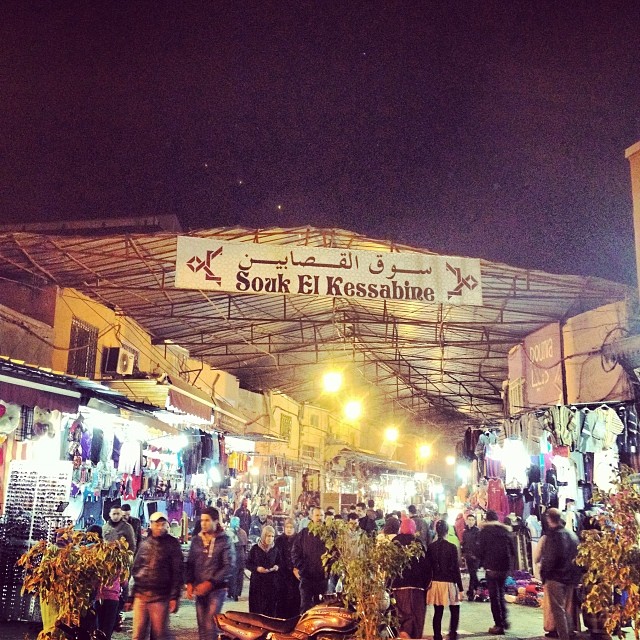 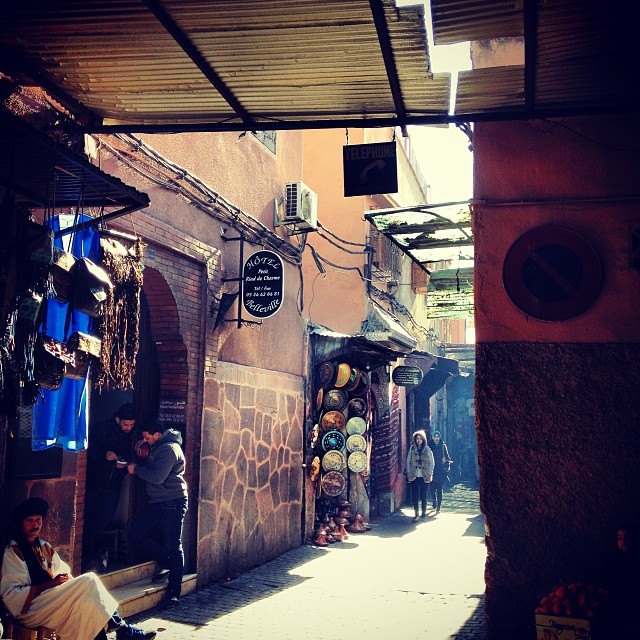 Marrakech is definitely a city of great contrasts. There is undoubted poverty, as well as great wealth – and everything in between. It is noisy and chaotic, but if you’re staying in a riad, calmness descends. we stayed in a very inexpensive one, just outside the medina, and it was very beautiful. Once through the big wooden entrance door, it was like being in a different world… 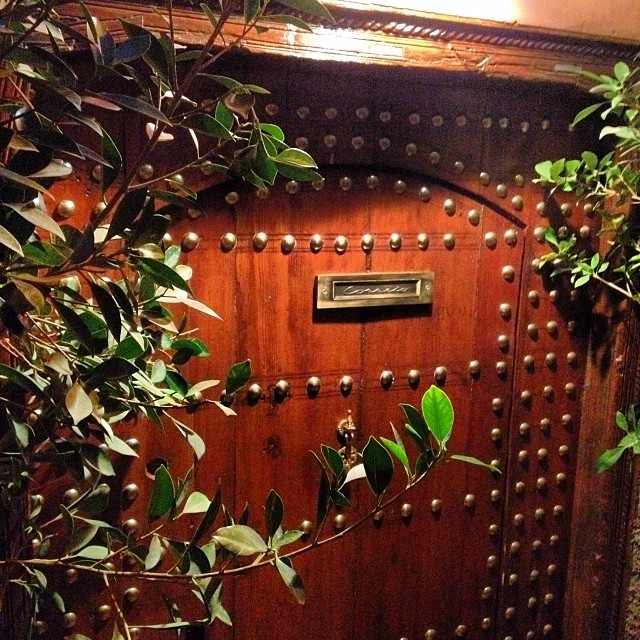 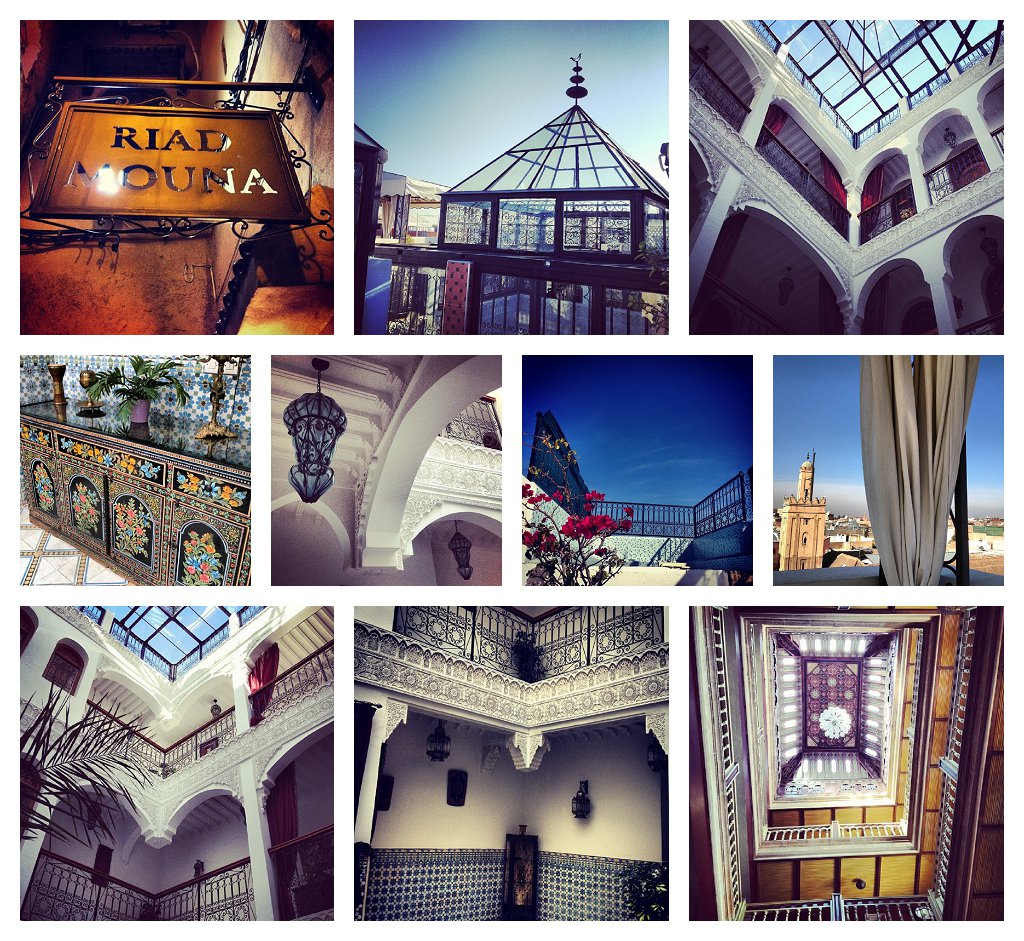 We’ve only stayed in Marrakech for short bursts, so are certainly no experts on this North African city – but, as a stop-over to elsewhere, it’s perfect, especially if your final destination is the coast which is a good 4-5 hours away.