I’ve thought long & hard about adding blogs to the website, in the current climate. It seems too frivolous to be posting about renovations and life-style things and recipes. But, and it is a big but, we’ve worked hard for so long to get to the point where are currently, that I have decided to carry on, adding blogs. My way of continuing to record our journey, as we, like so many other people, embark on self-isolation for the next few weeks.

Our second bedroom has gone through some changes since we became the custodians of our stone house in Istria. Before we started work on it, this bedroom was an undecorated space, with two sets of bunk beds, left from the previous owners, shoe-horned into a room which was just not working. Beams, although potentially beautiful, were untreated and clearly hadn’t been touched in a long time and very basic pine floorboards were bare. The window, which again we knew, could be a real feature, was partially undercoated and the ill-fitting door unable to close because of one of the most ugly door handle/locks we’ve ever seen. All in all, a pretty dismal excuse for a bedroom. However, we had to have at least one room where we could escape the madness of full-on renovation – and so three years ago, Bedroom Two, was for a while Bedroom One. 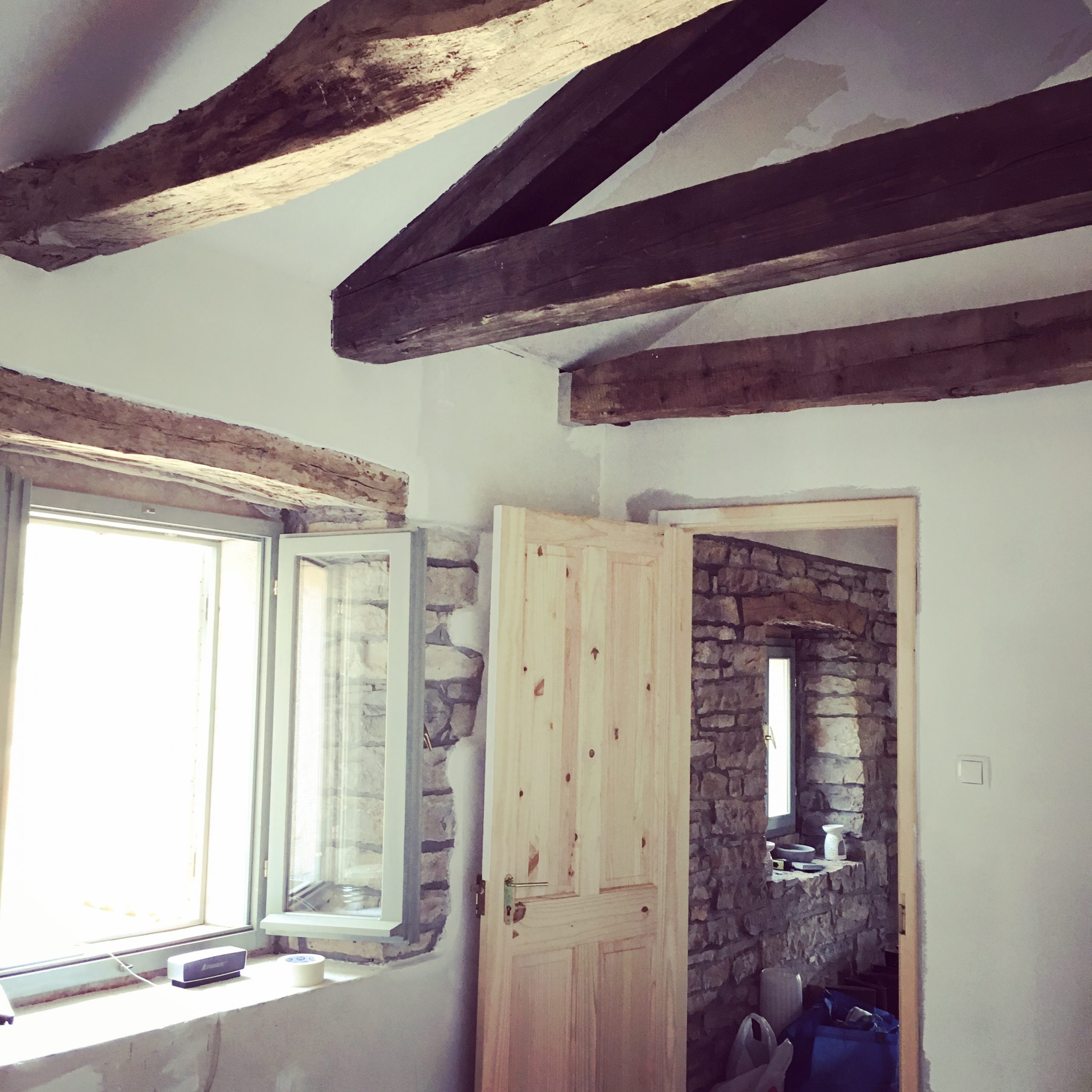 From what we inherited above, we were delighted with the first incarnation with the room. Walls were painted white, a new bed was ordered and delivered, industrial wall lights fitted, new bedding on the bed and we were in. Utter luxury! I cannot tell you how amazing it was, in the early days, to close the door at the end of the night and sink into that bed. If you’ve renovated a property, you’ll know where we’re coming from. 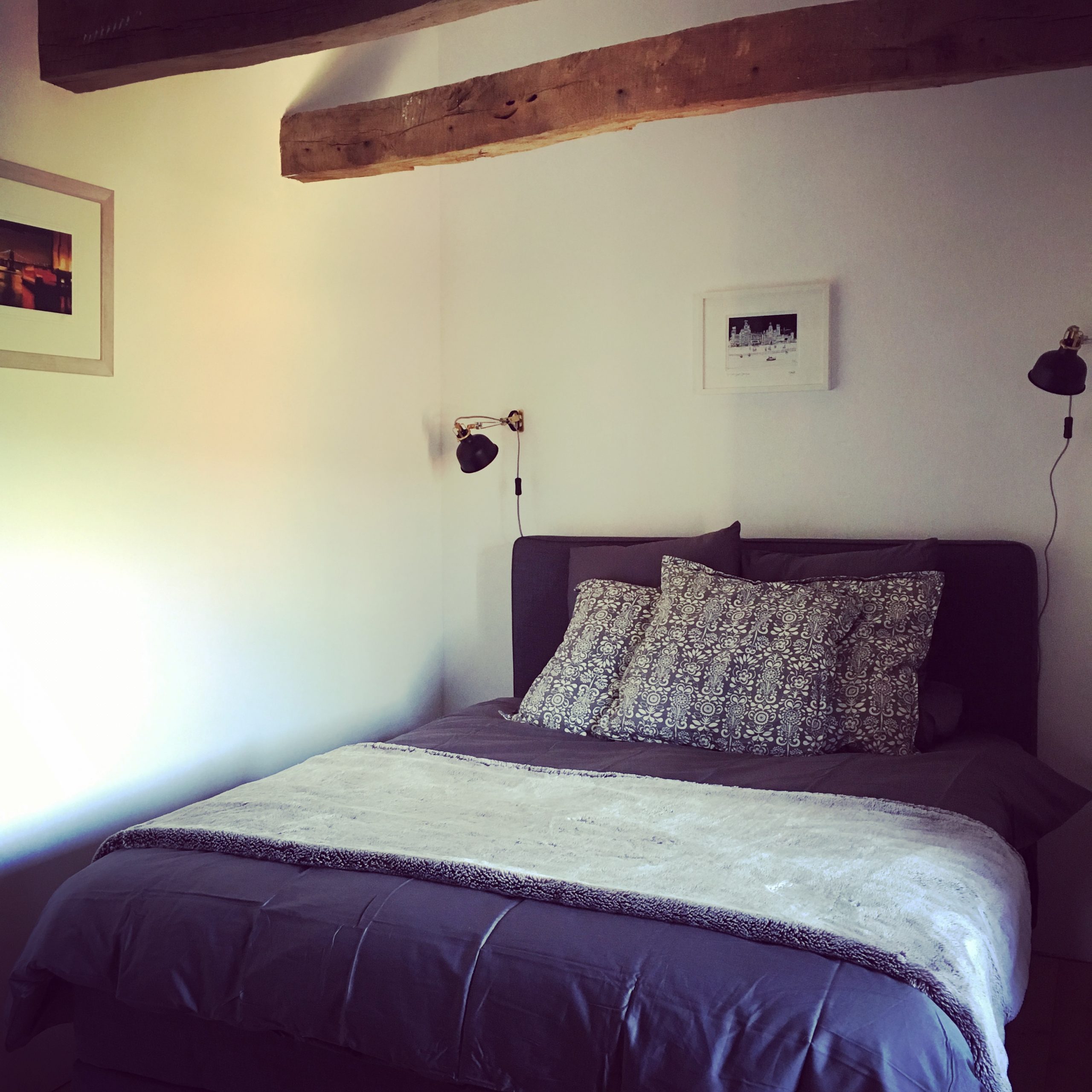 But, we’ve come a long way since the room looked as it does above. The wooden beams are original – very old and very beautiful, but we did have a problem with woodworm, which we had to resolve very quickly, as this room became a guest bedroom. We called in a specialist company who treated all of the beams in the house, and we then got to work on them, ourselves. Just to be extra sure that the pesky woodworm had gone, we further treated them, wrapping them in clingfilm for a couple of weeks – just to be on the safe side. These measures seem to have worked, and we think the woodworm are no more. Although the beams were beautiful in their natural state, our style for in the interior is contemporary and they just felt as bit too country-cottagey. So we got to work on transforming them – and after undercoating and painting in a very soft gey satinwood, they are, we think, even more beautiful… 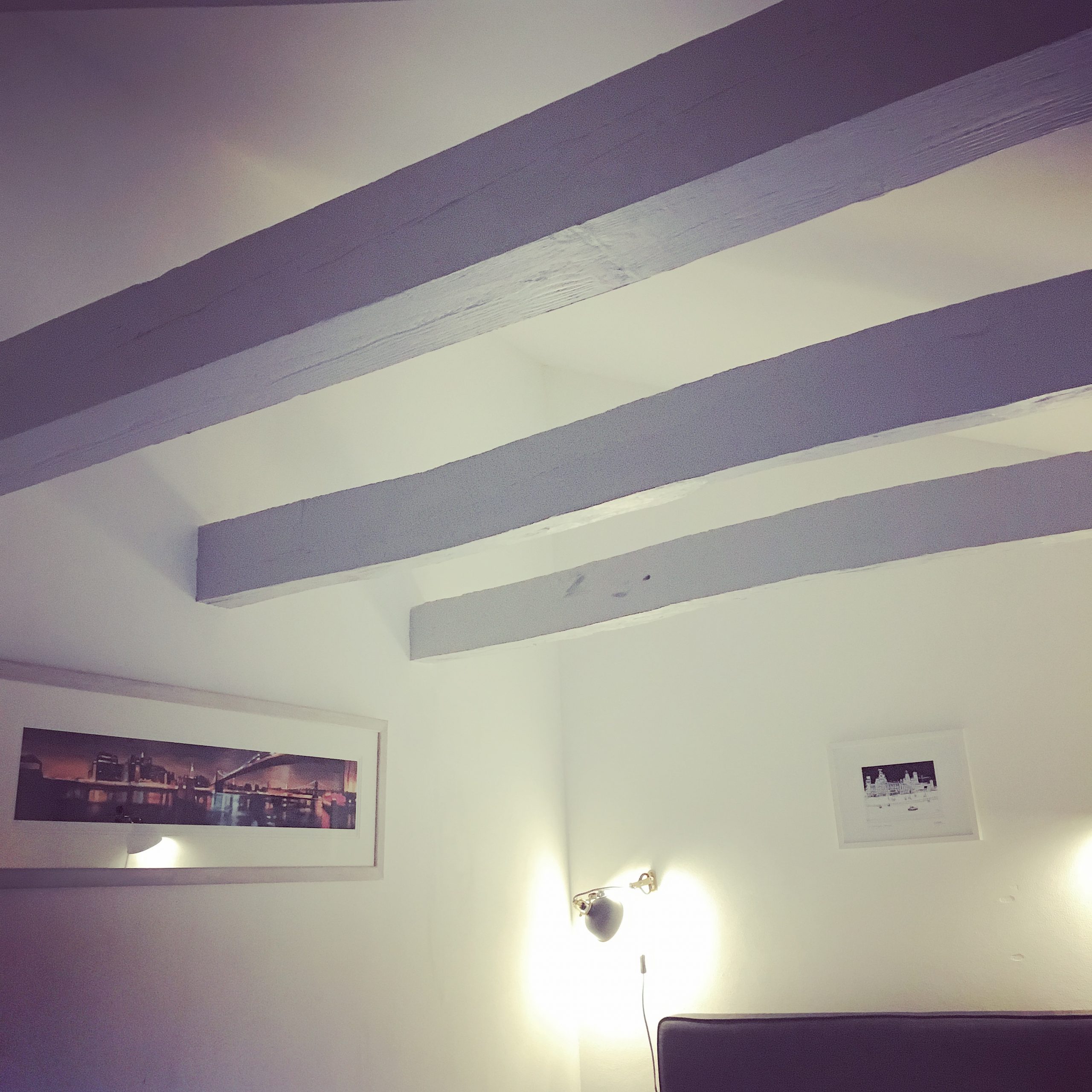 To contrast with the white walls and soft grey beams, the woodwork – window frames and surrounds and door and frame – have all been painted in a very soft baby blue satinwood, which contrasts well with the colours around. 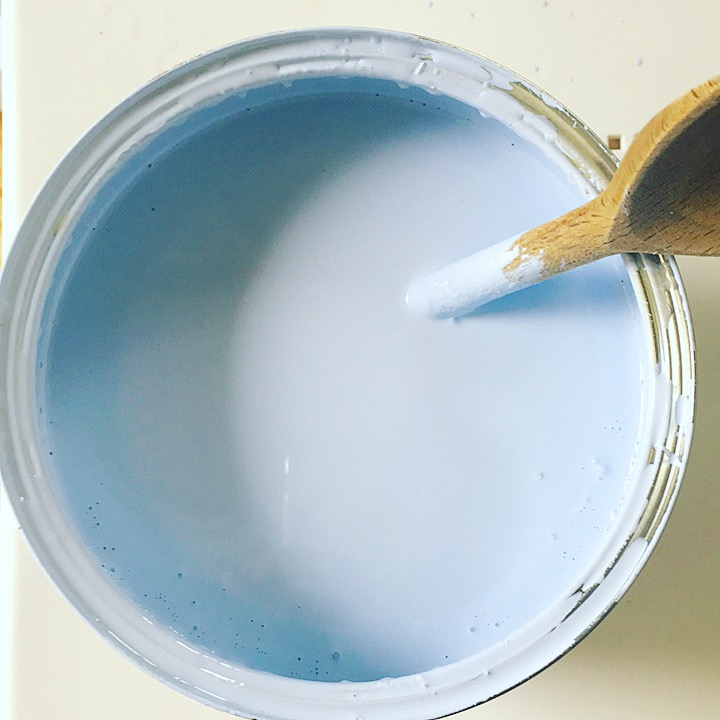 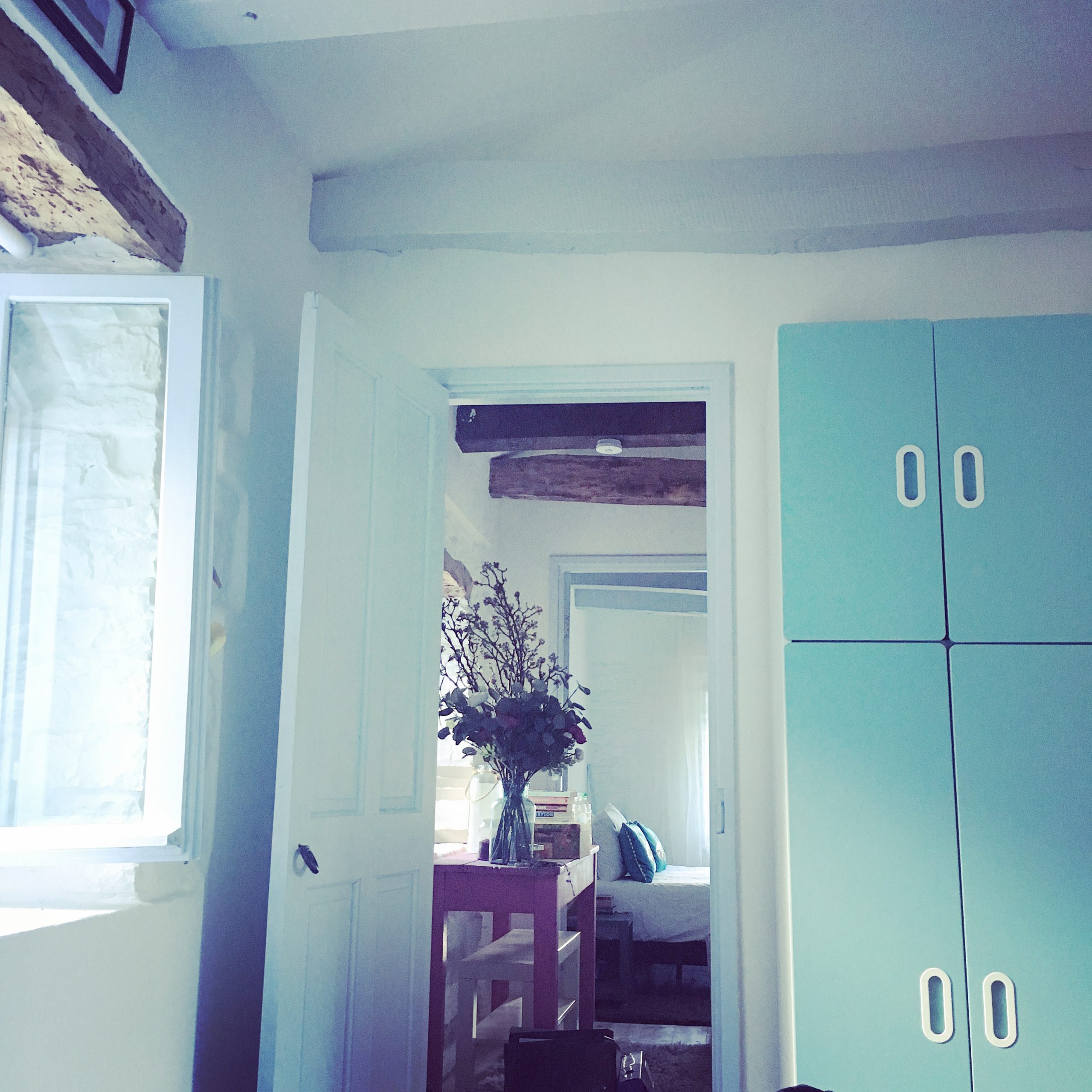 Although the room isn’t the largest, it can comfortably fit a double bed and two wardrobes from IKEA – these are from the STUVA range. More for a child’s bedroom, but perfectly adequate, with plenty of hanging and storage space, for a smaller bedroom. And, much nicer on the budget too. However, as they are actually full of our stuff, they weren’t serving much of a purpose in a guest bedroom and so the decision was made a few weeks ago, to have a big change around and create bedrooms which worked much better as spaces. We’ve completed the dirty, dusty, disruptive renovation work, and so can now have a bit more fun, being creative and accessorising.

The wardrobes went to their new home, in the room next door and once we’d created a bit more space, we started on the new look. First up was the cerise pink table in the hallway. Once an old work table, it was covered in paint splats and oil stains, but a few cans of spray paint gave it a new lease of life and it’s been a proper pop of colour, for a couple of years on the upstairs landing. However, we wanted something that visitors could use – a table where they could dry hair, put on make-up, maybe catch up on a few emails on a lap top, but we didn’t want to go out and buy something else. Our house has rapidly become full of *stuff*, despite a massive clear-out before we moved, so we’re trying to recycle and upcycle where we can. The pink table was a perfect starting point… 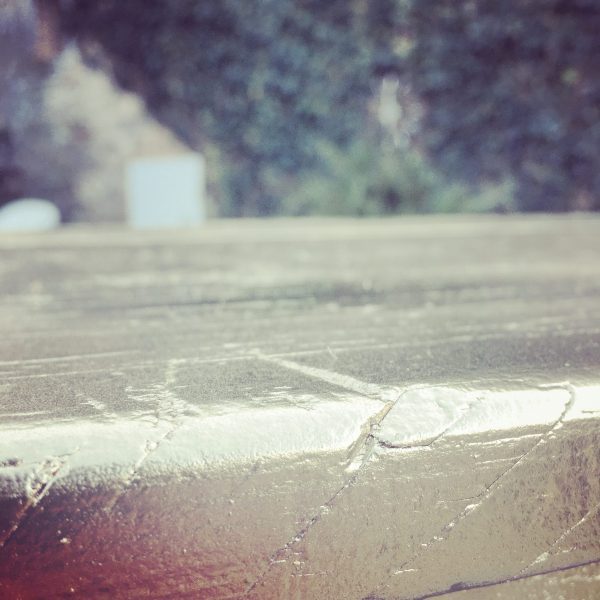 Spray paint is now our go-to product for quick make-overs and within an hour, the pink was gone and replaced with shimmering gold. Accessorised with a beautiful opaque, glass vase, in a very unusual shade of green and tall faux blooms, scented candles in pinky coloured glass jars and a tortoise shell mirror, it now looks completely different. A round globe lamp sits behind the green vase, so at night, a really beautiful glow is cast around the room. The large pine mirror looked out of place, against the table, so this too has been sprayed gold and now looks a million dollars. For the cost of a can of spray paint. I didn’t want a bulky chair at the table and so found this rather lovely stool – gold frame and pale pink velvet seat. Perfect! The Moroccan style off-white & navy blue geometric patterned rug adds warmth and sits well on top of the newly painted navy floorboards. No more pine! 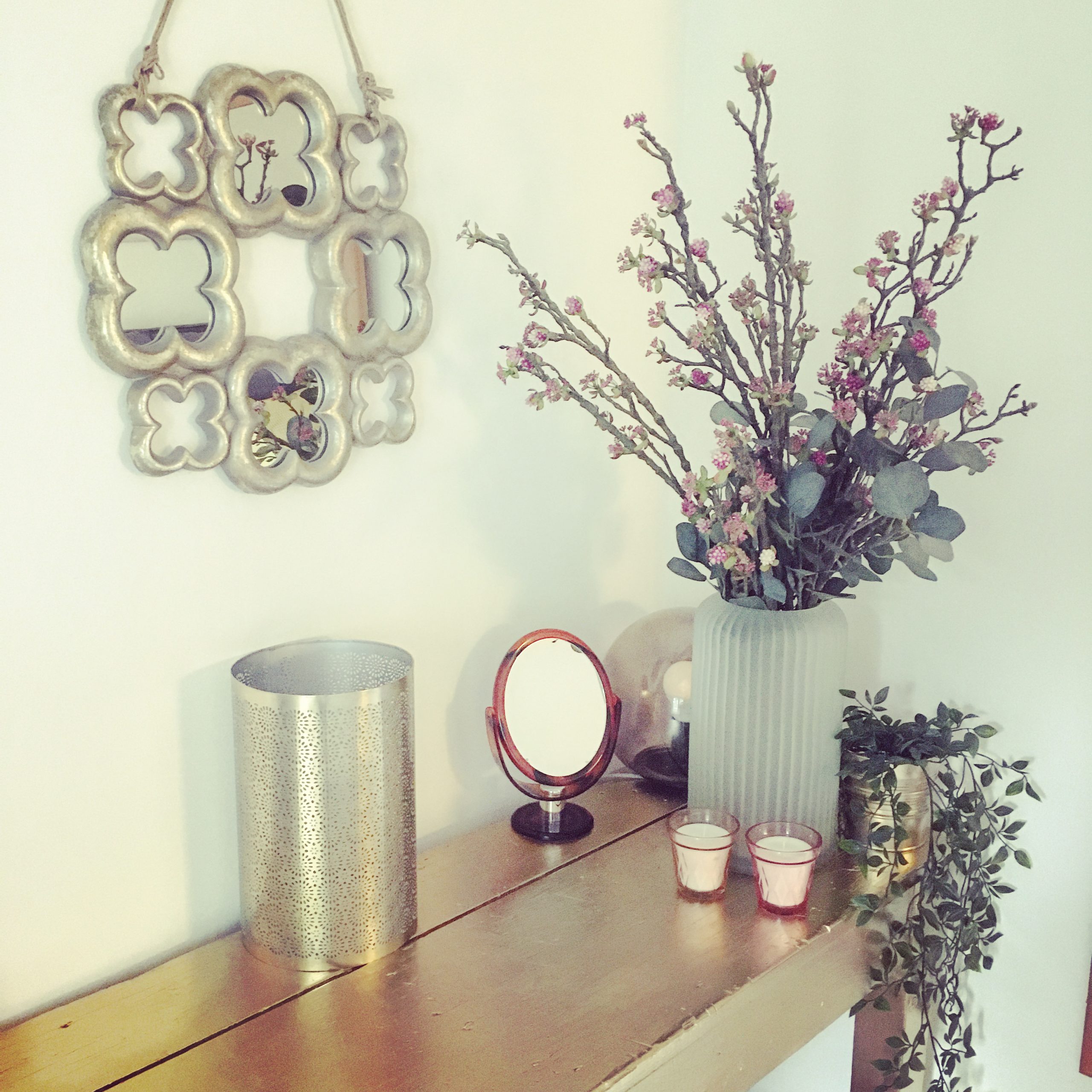 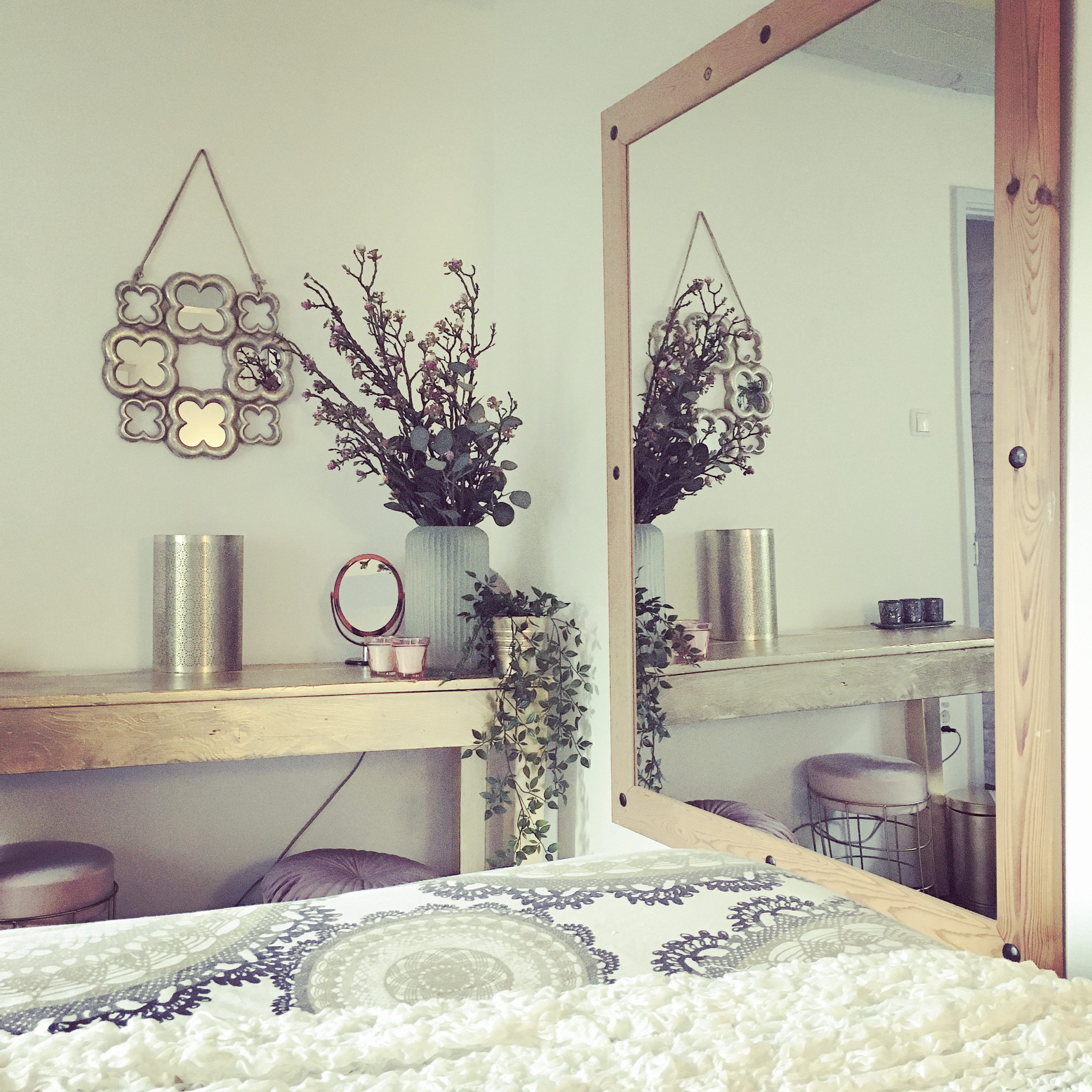 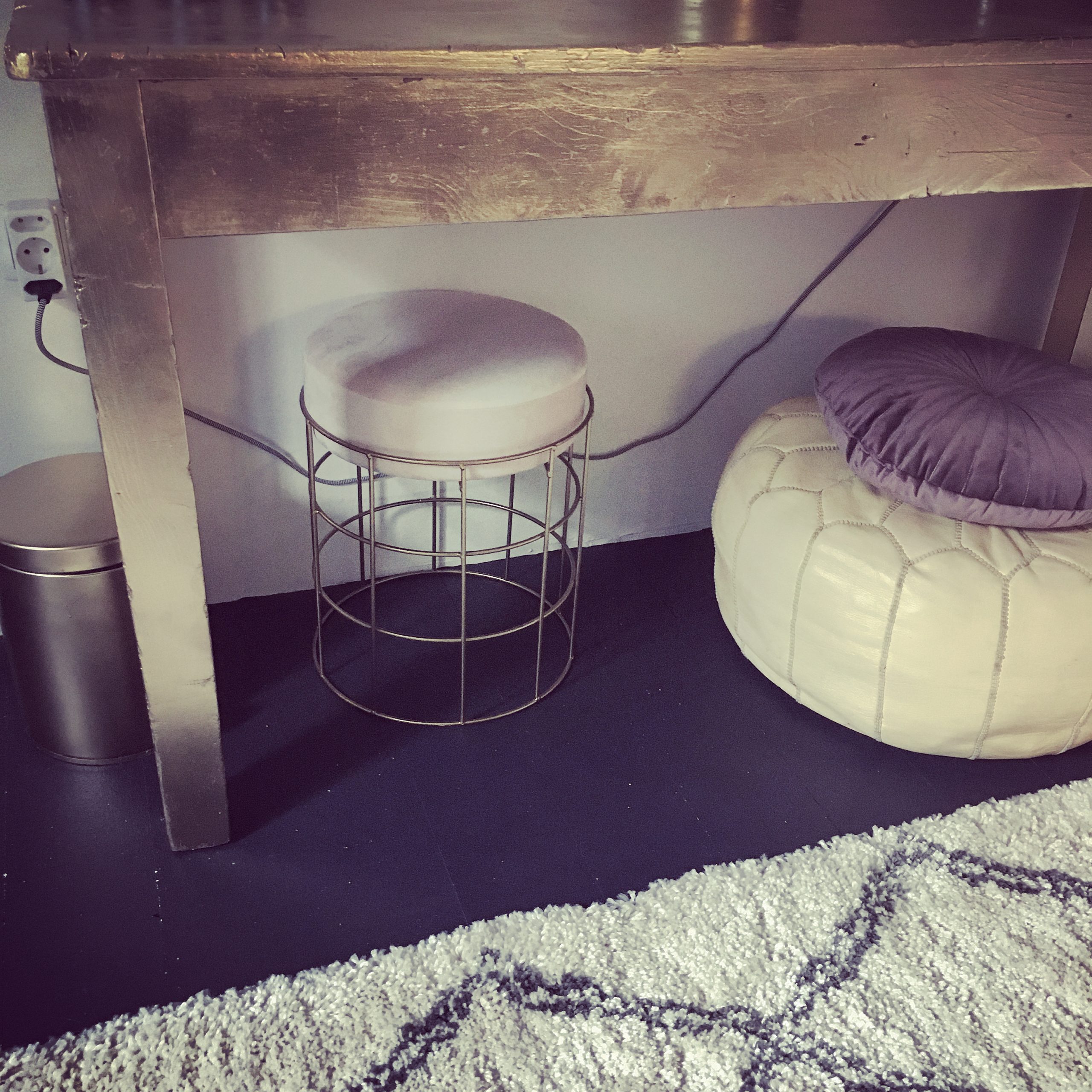 Yes, I did spray the bin, too 🙂 Rather than searching around to find something which was more suitable, the black, metal, flip top IKEA bin was given the bling treatment, too. And, why not? 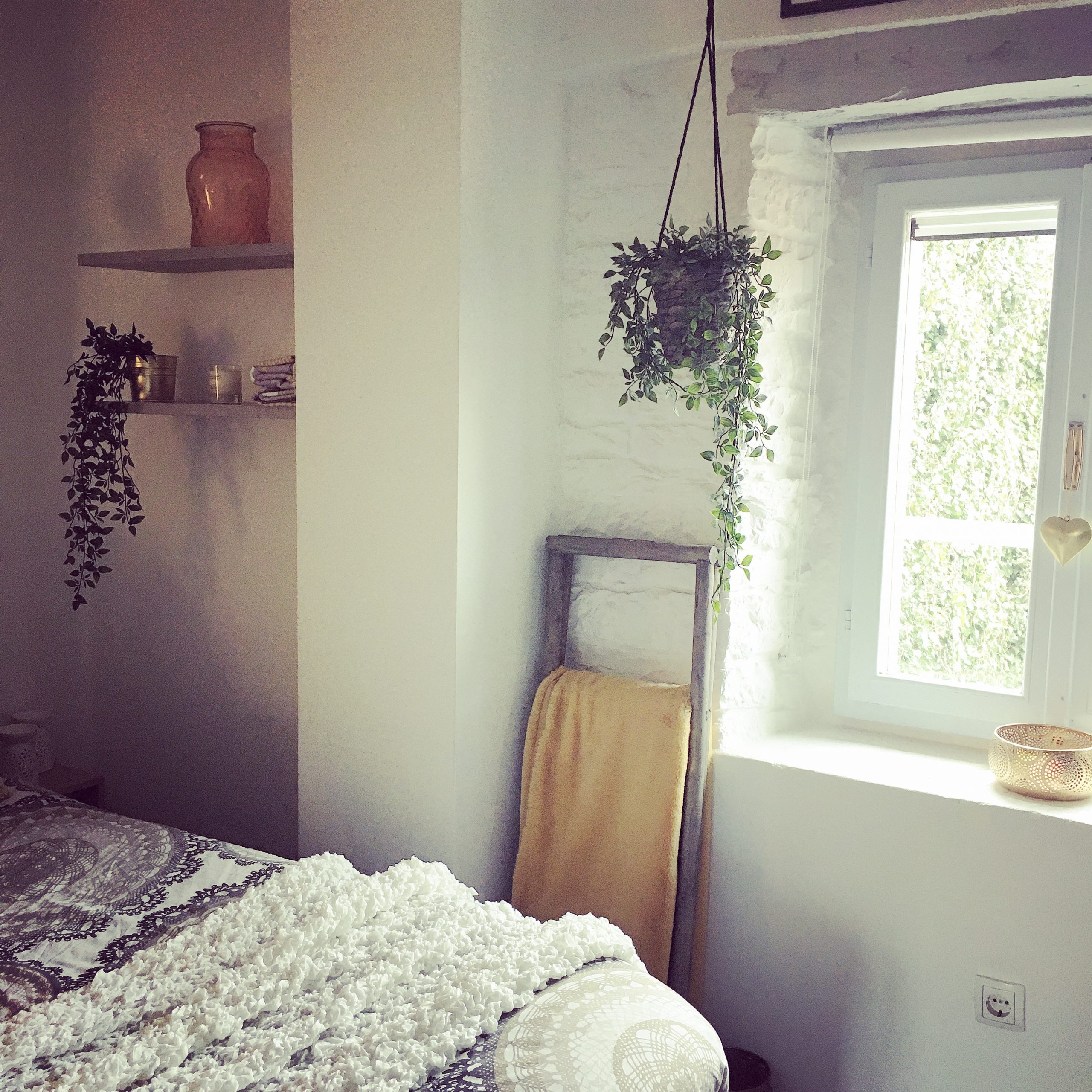 To the left hand side of the window is the internal chimney, which comes up from The Snug and the living room below. Gorgeous in the winter, as it means we don’t need any additional source of heating in this room, but it does make the way we can lay out the room, a bit more problematic, because it is bulky. The bed can’t be located anywhere else, but space to the side is limited because of the chimney, meaning that we were also limited to what we could have each side of the bed. We wanted something that people could use for mobile phones, ipads, drinks etc and did a fair bit of head scratching as everything was always just a tiny bit too wide. Then, hurrah again for IKEA – we spotted these mustard coloured boxy wall units, which are just perfect. Attached off the floor, but not too high, they don’t take up too much room and mean that phones be charged, and there’s space for water, a book or two etc. 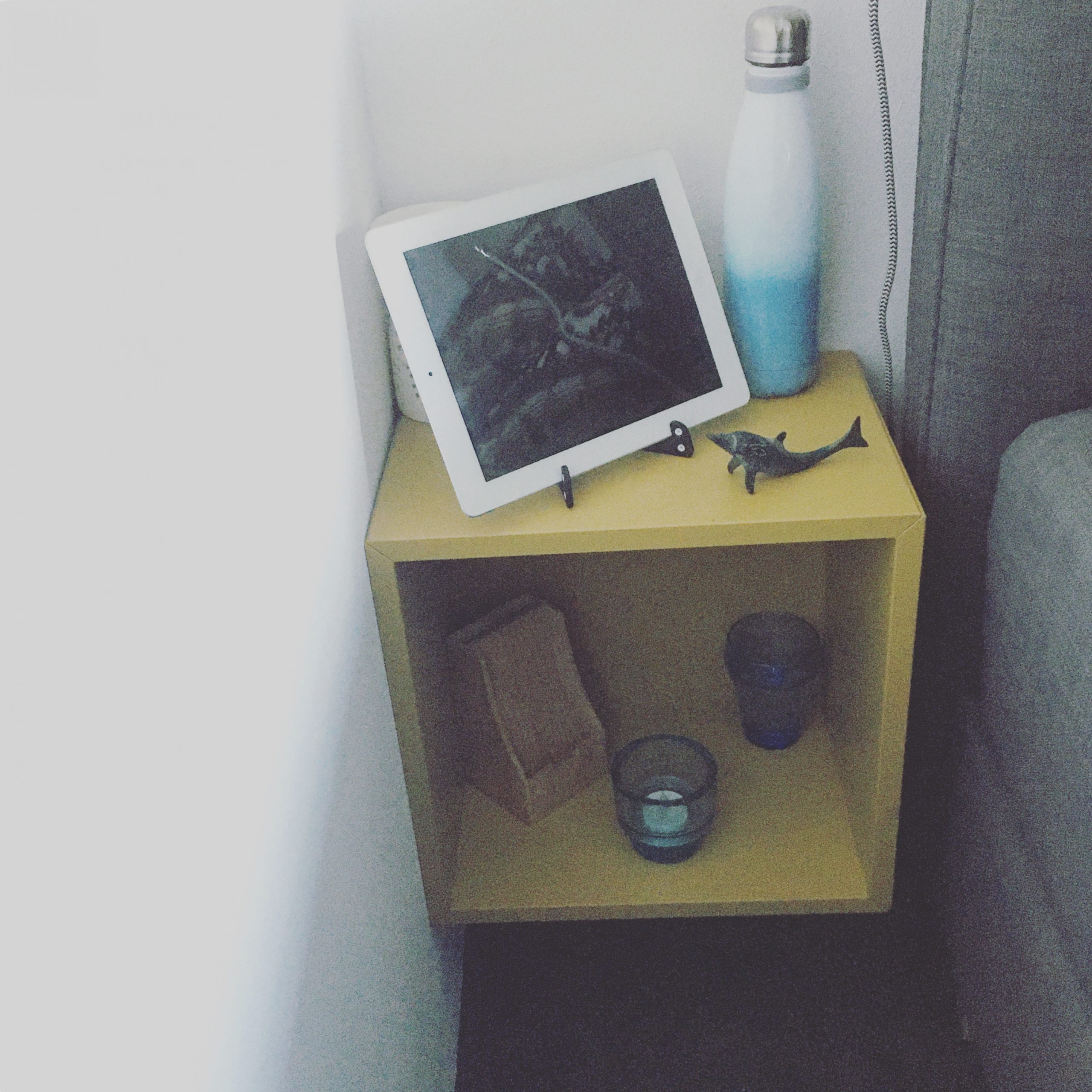 I think we might now be happy with this room. Although who knows? After a few weeks of self isolation, we may have sprayed the whole room gold…