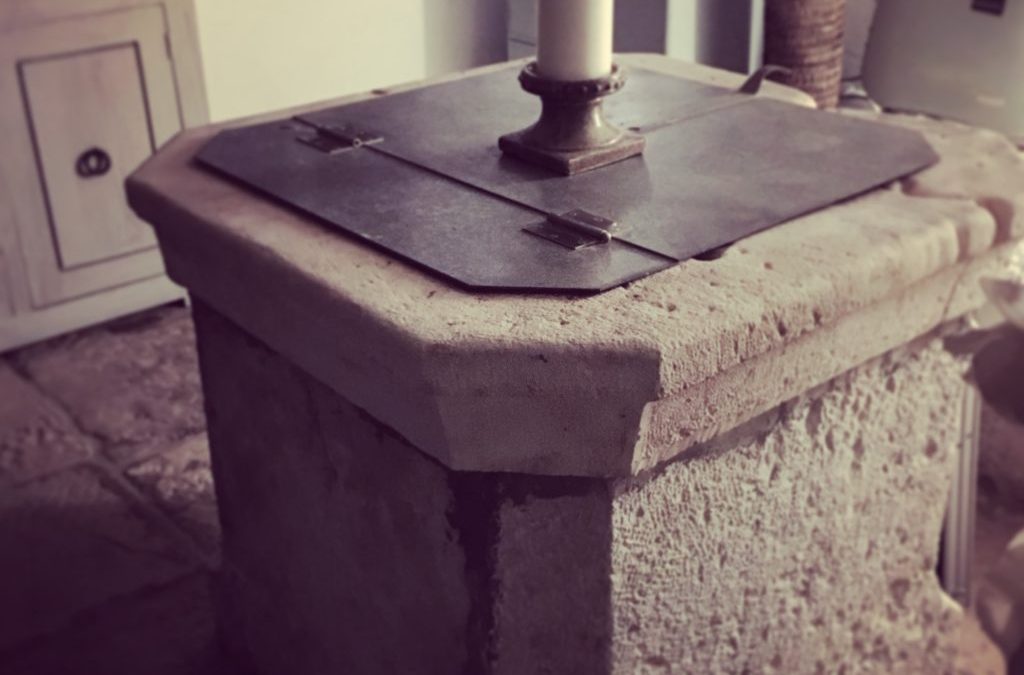 One of the more unusual features of our house is an internal well. A working well, at that – we know when we’ve had a deluge as we can hear the rain water roaring into it. We don’t know how old it is, or whether it was originally built inside the house. Our builder, from his knowledge of things around these parts, says it’s certainly more than 100 years old, probably a lot older and was probably outside the house. Meaning that at some point, perhaps when owners came into a bit of cash, they extended the house around it. A very unusual decision, we are told, as the well would most probably have been the only  source of water for the village. So, this structure has real history and stories attached to it – and is beautiful. Just entirely impractical for our way of living. It sits in the middle of the room, taking up quite a lot of space, so what we can do with this room is very restricted. 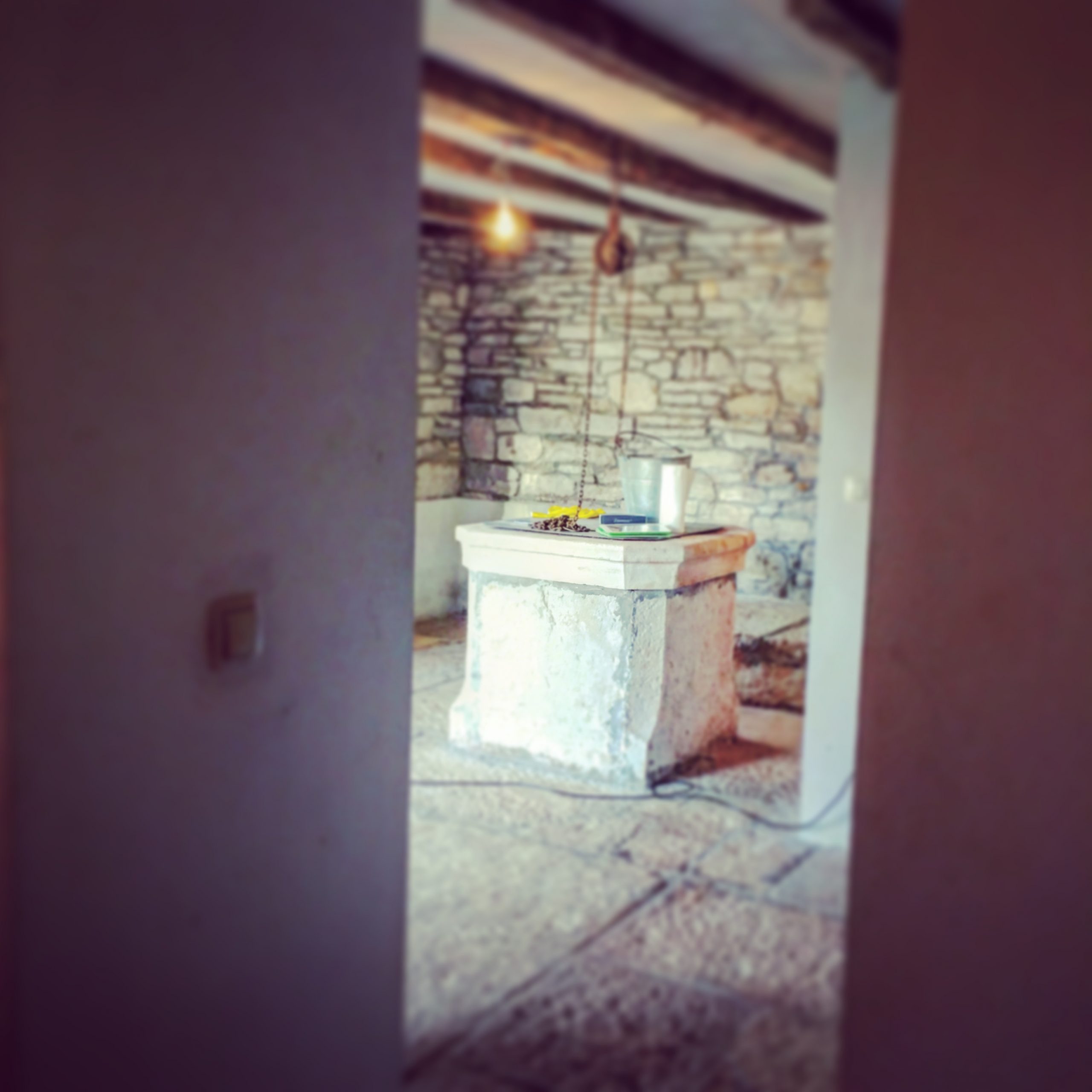 It’s been used as a temporary decorator’s table, and at times has looked quite pretty… 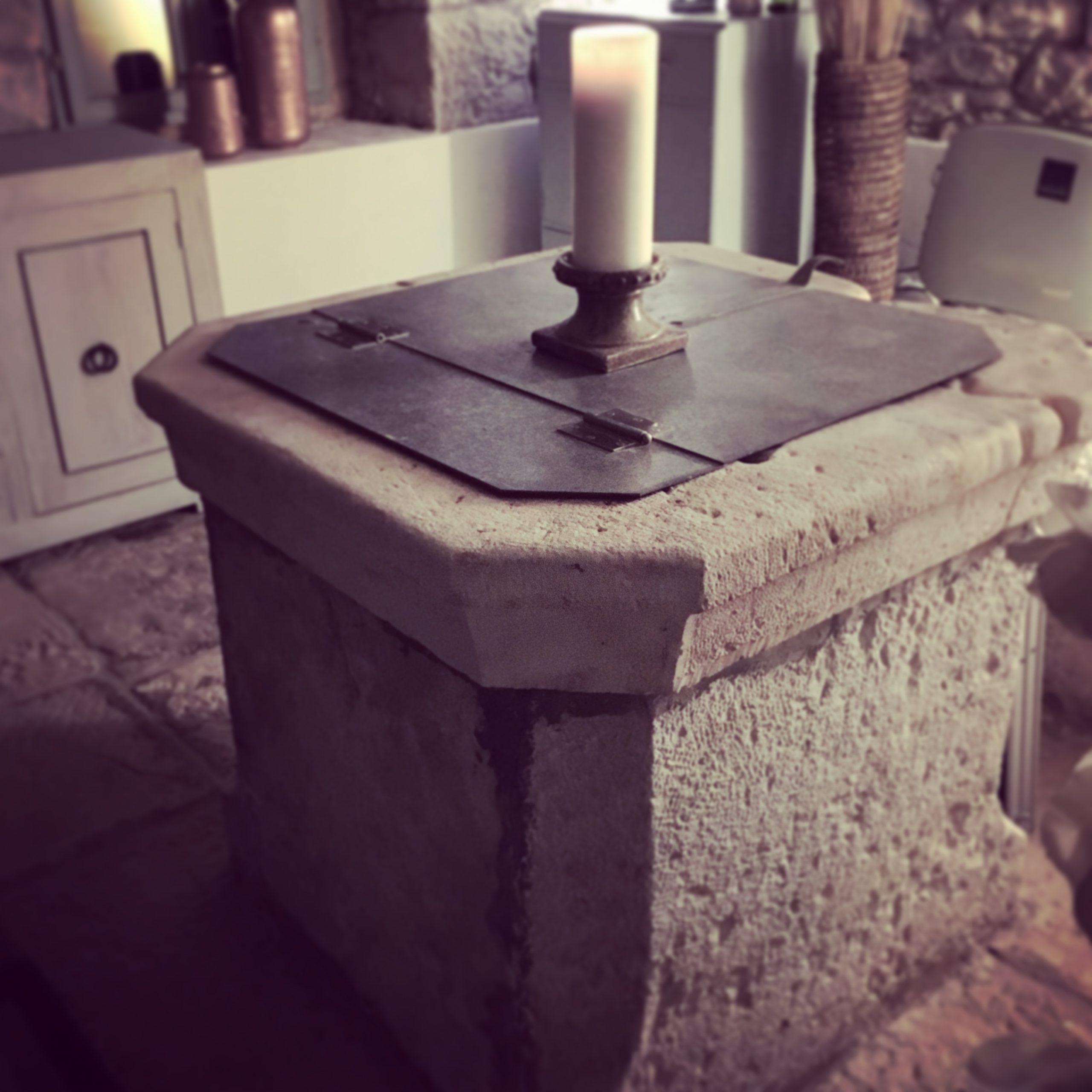 But – it is still in the way. We were also noticing, over the colder months, that patches of damp were beginning to appear on the walls. No surprise when you live above a chamber, full of water! So, Misko, our builder came to the rescue – and to whom nothing is ever a problem.

Armed with a small pump, a length of tape and a hose, he arrived yesterday to begin draining it. It doesn’t look the most sophisticated set-up, but it’s working! The water level has dropped so much, that with a powerful torch, we can see now (over 24 hours later) see the floor of the well, and the side walls which are becoming exposed as the water level drops. In the reflection of the water, we can also just about make out the arched roof of the well.

We hope that by tomorrow, the water will have drained and the pipe down which the rain water flows, will be diverted – we’ve had nearly a week of sunshine, but tomorrow rain is forecast and we definitely don’t want any rainwater getting in again. It will also mean that Misko can get down into it and we can finally find out our options.

Option 2 is seeming to be the much more practical – and I think, in the short term, much more beautiful – solution. The orange piping in the picture above, actually encases electricity cable, installed by the previous owners. We should ask them what their plan had been for the well, as you wouldn’t go to the expense of installing this kind of electricity supply without a plan. We suspect it was maybe what we are planning – having the shell of the well removed (easier said than done, especially as it wider than the front door) and re-positioned outside, in the garden, and then covering the access hole with reinforced glass, and having it lit up from below.

However, first things first. Our stonemason arrived to dismantle the well and rebuild it outside the front door – on a Sunday morning no less! 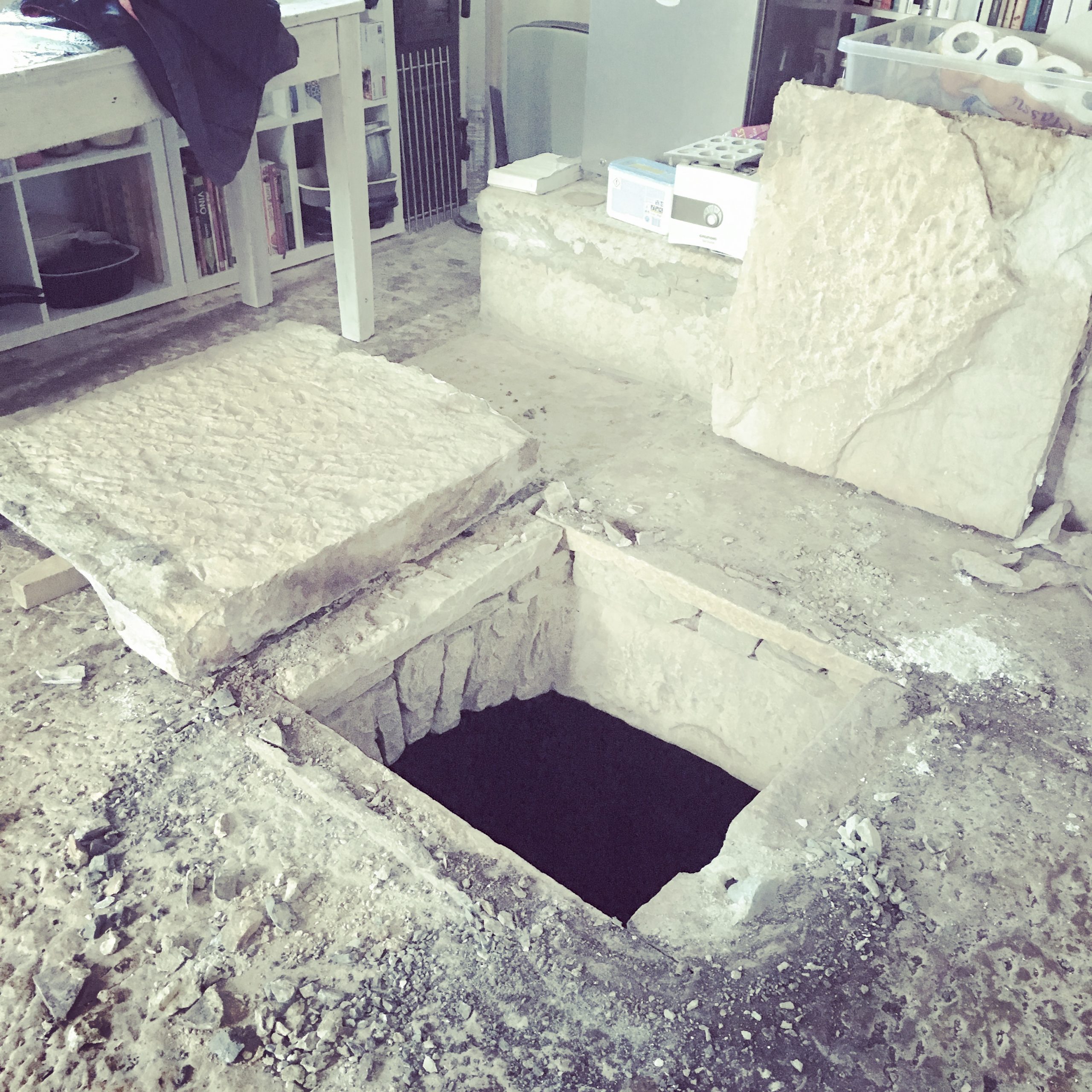 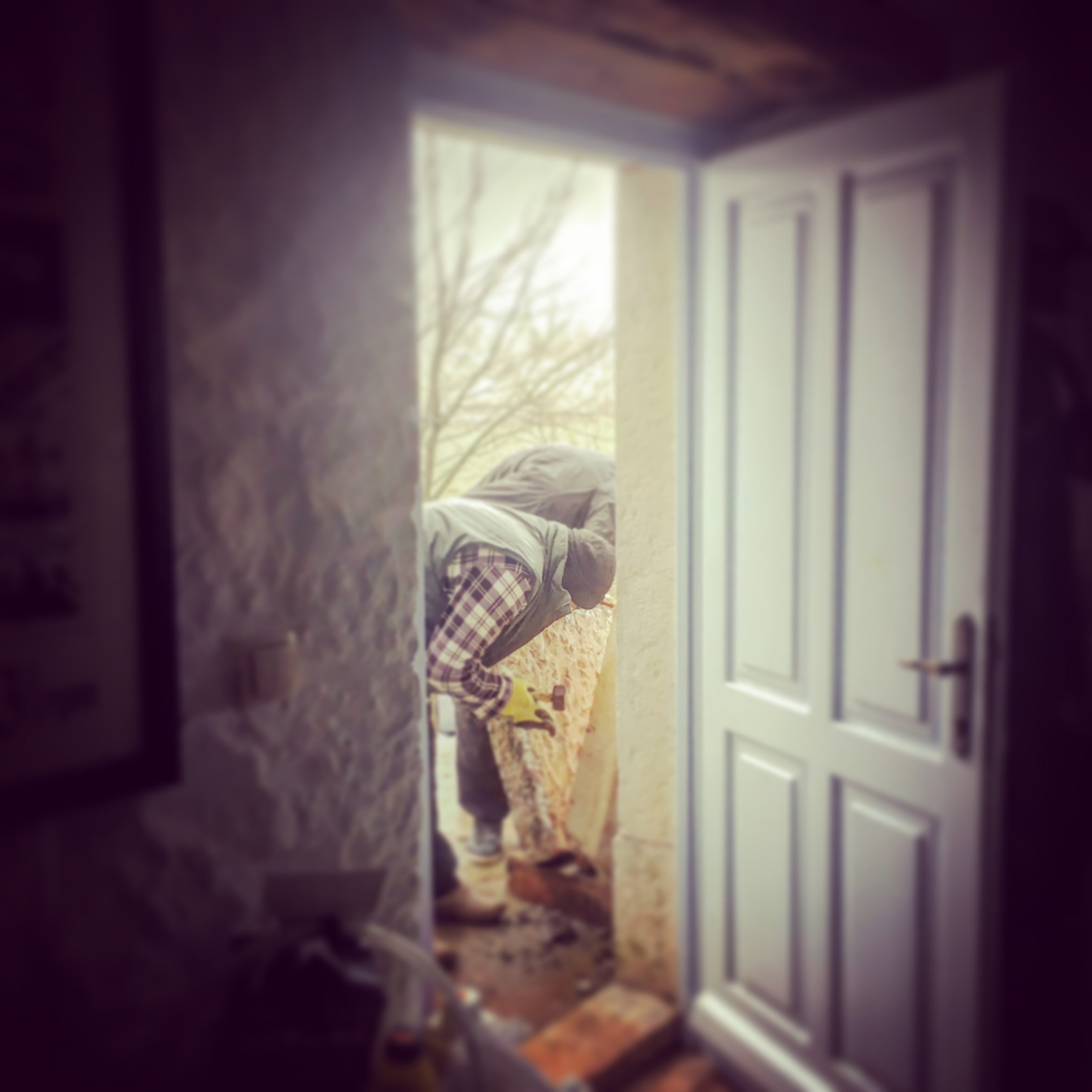 However, as delighted as we were with the removal and relocation of the well, it did leave us with one small issue, which we have to get our heads around pretty quickly, as if it not resolved, it could be a danger. The issue of a hole in the floor of the well room, and a ten metre drop… 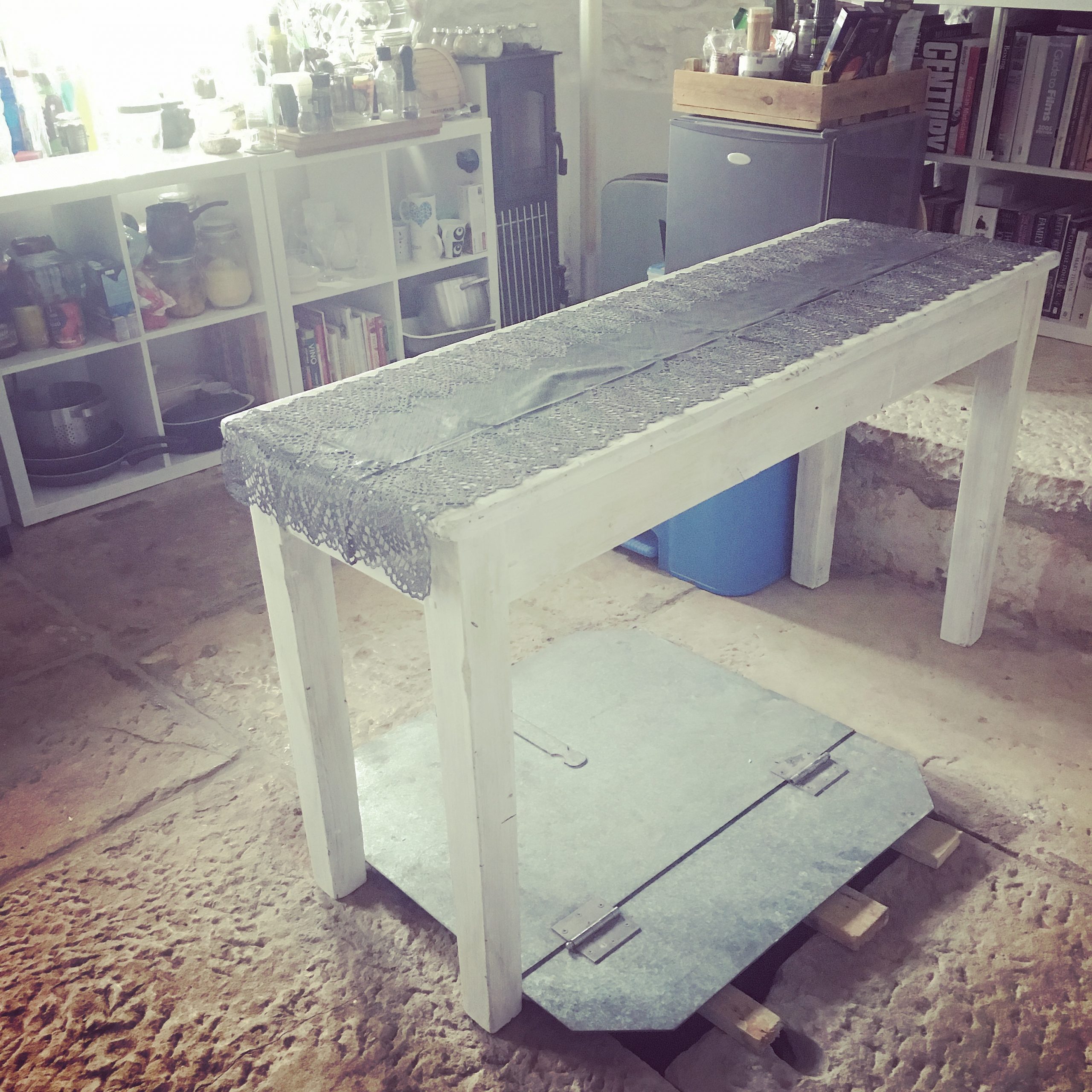