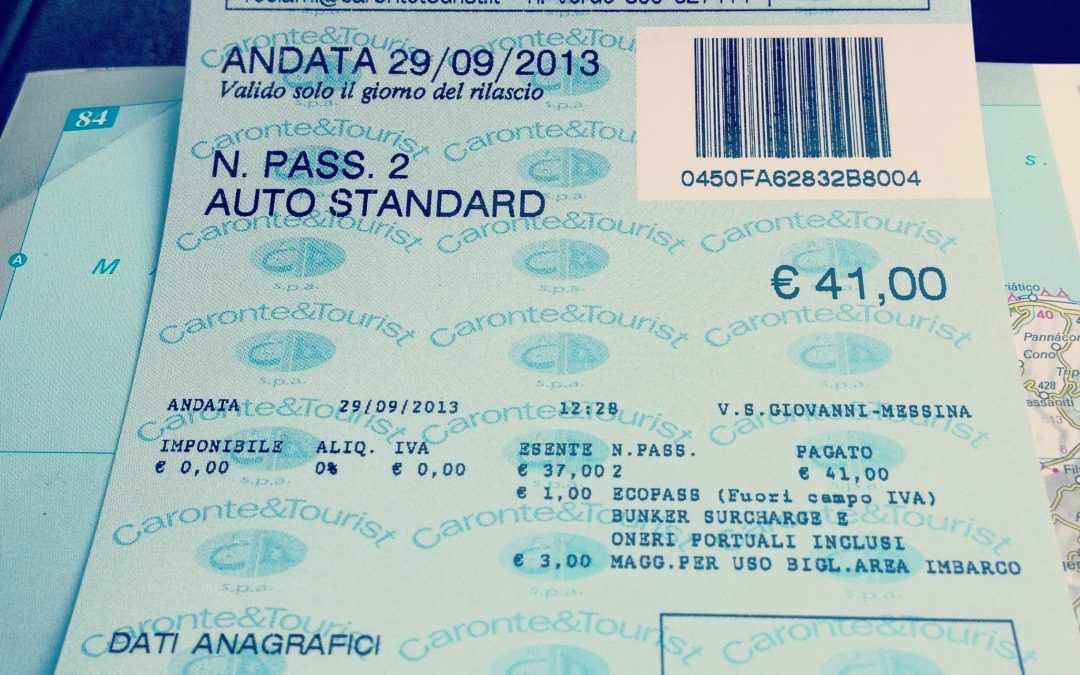 On our travels through Italy last year, we made the decision to explore the eastern coast of Sicily and having done some online research, decided that Ortigia (in the region of Syracuse), sounded like our kind of place. We took the car ferry from Reggio Calabria to Messina (about 45 mins) – tickets are bought at the port and a one way crossing was 41 euros for a car & 2 passengers. 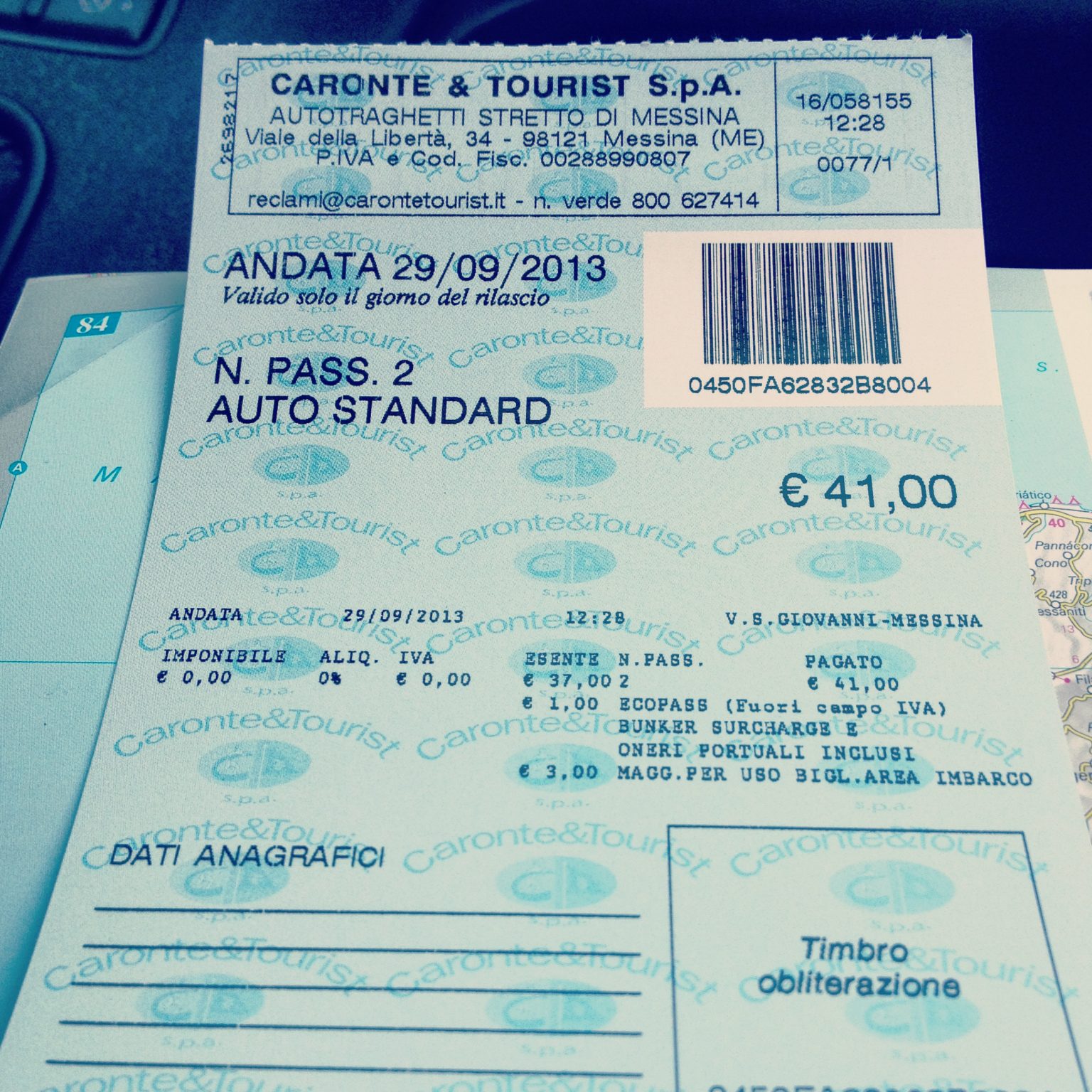 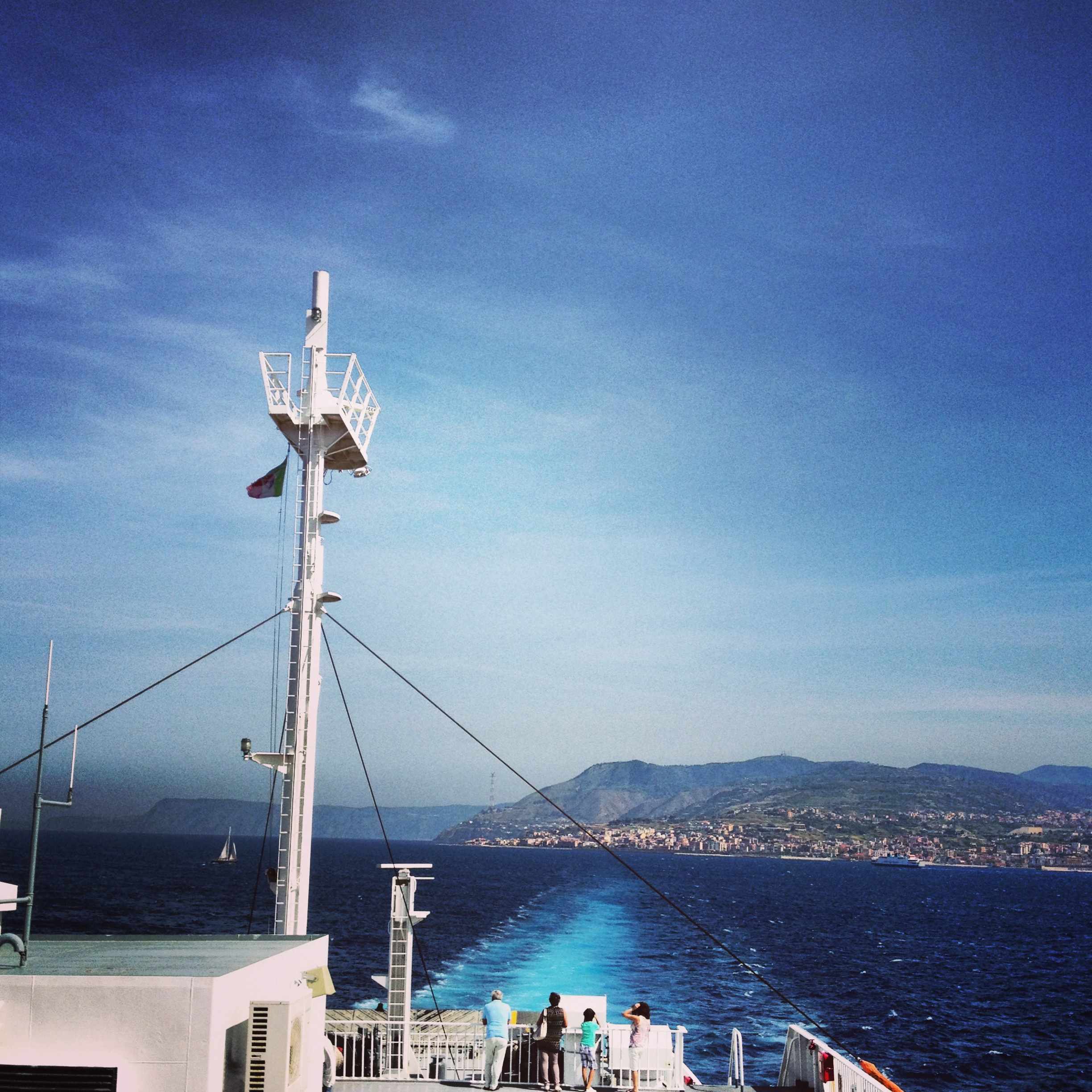 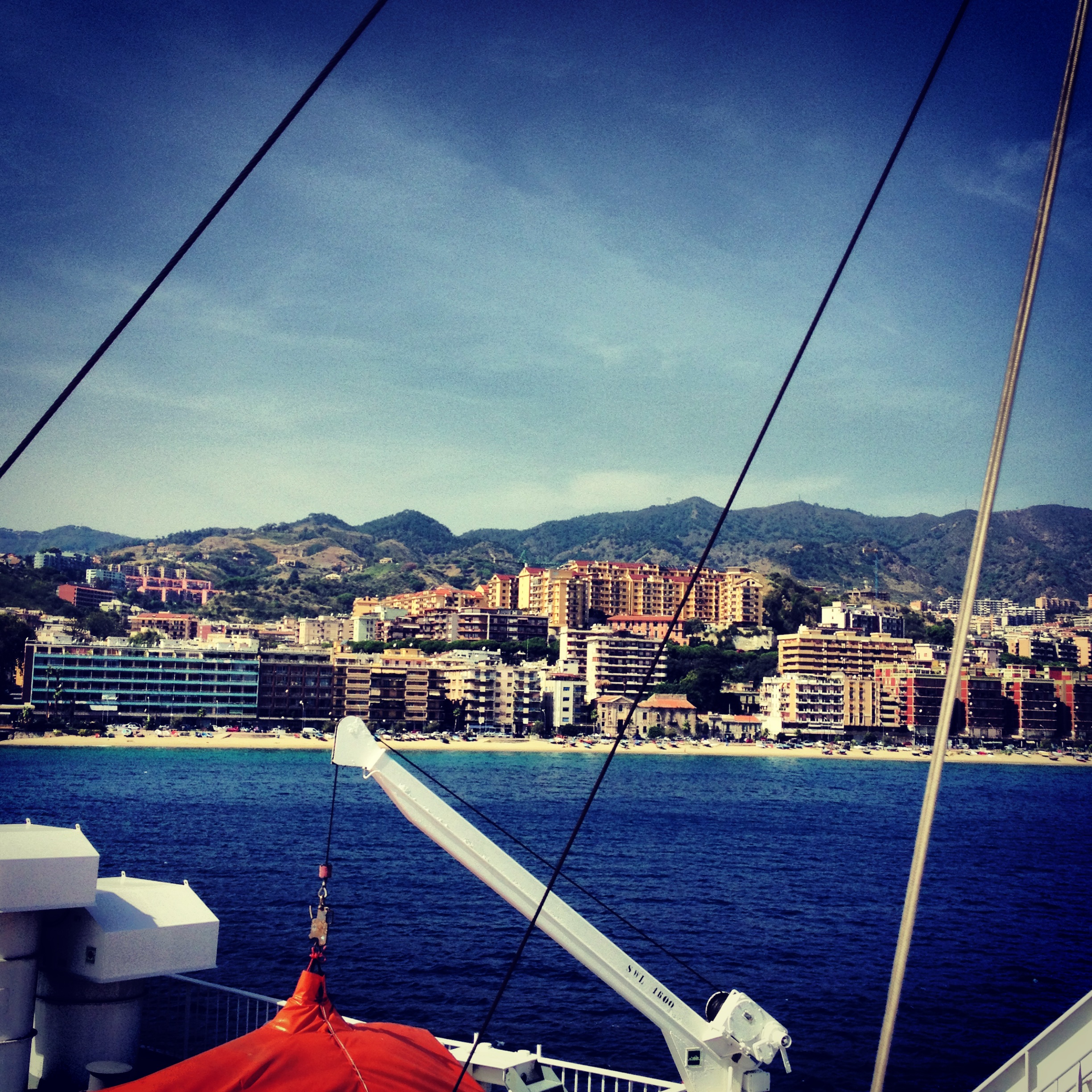 Ortigia is approx 170km south – factor in driving near Catania as it’s very busy, and does add to your travel time. The drive south along the coast isn’t the most scenic (we took in the very pretty – and expensive! -Taormina, on the way back north), so we headed straight to Ortigia – which is actually a tiny peninsula, connected to Syracuse by a road bridge. You get to get quite close to Mount Etna though, and this is quite a spectacular sight – especially, if as it was when we were there, it is belching out plumes of white volcanic gases & smoke.

It’s an ancient city, packed full of antiquities, beautiful historic buildings and narrow, winding alleyways. It has a completely different feel to the Italian mainland – I can only describe it as “Sicilian”. It’s a real city of contrasts – monuments, fountains, frescoes mixed in with the daily working life of the locals. It’s loud and fast and busy in places, then tranquil in others. One not to be missed spectacle is the morning market – pure theatre… 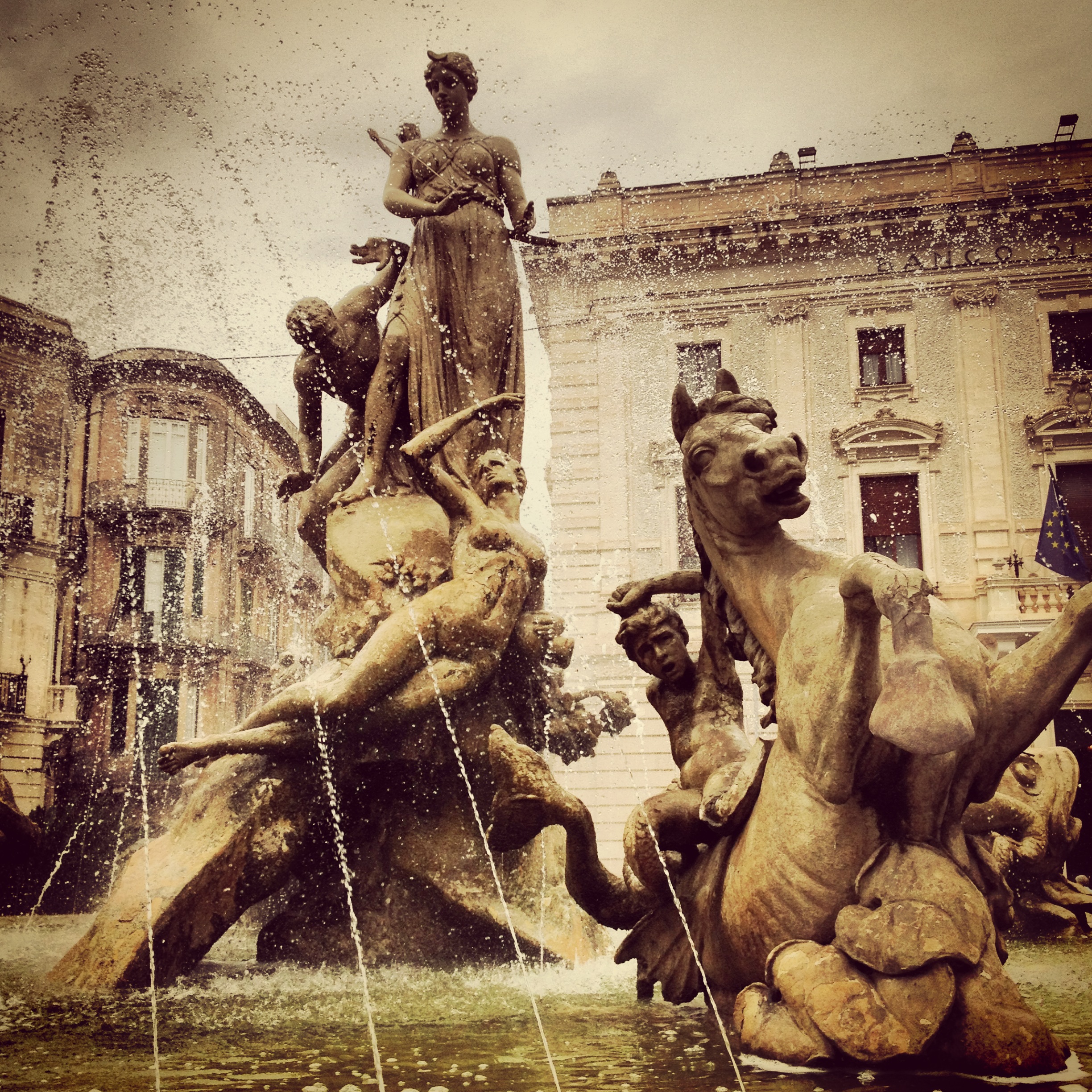 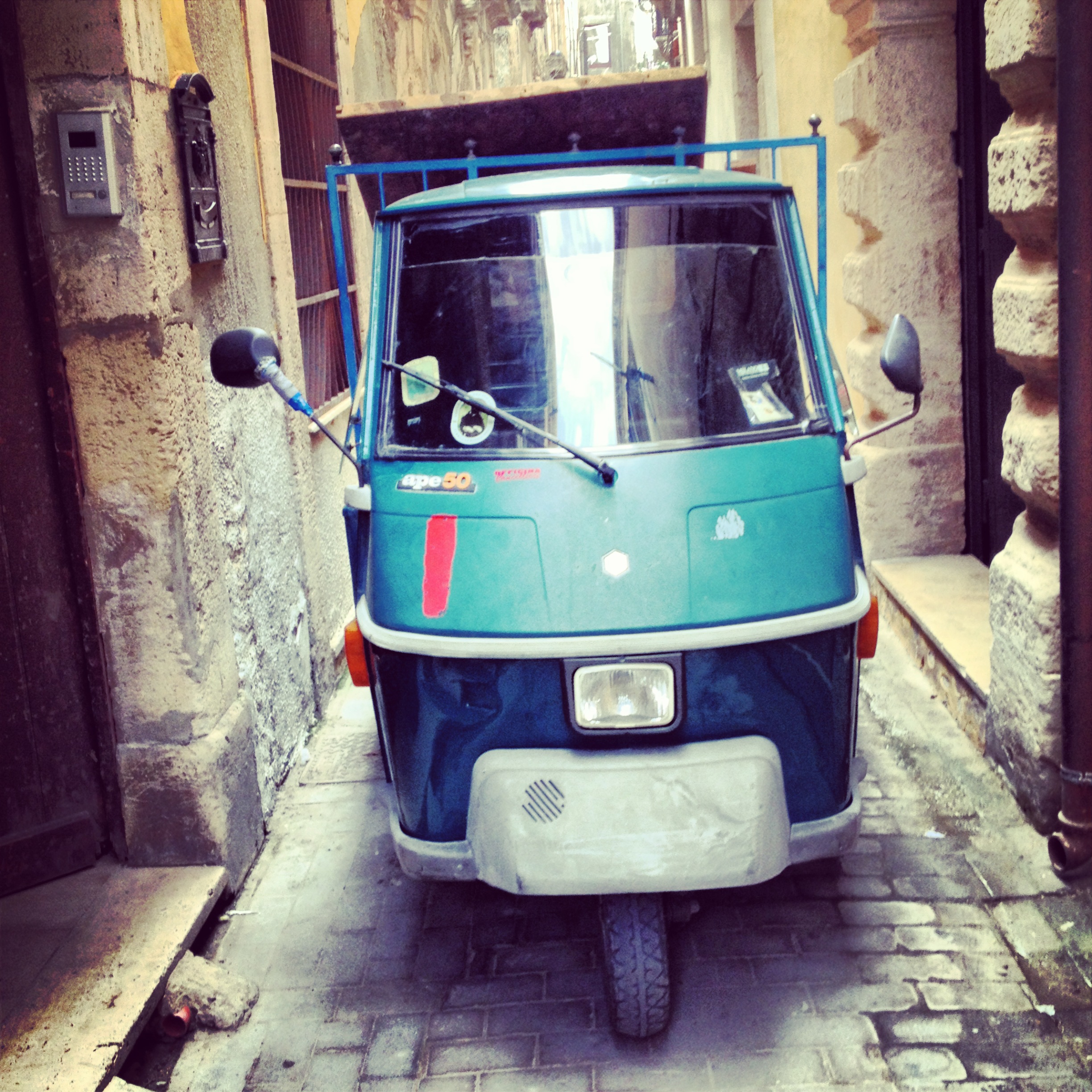 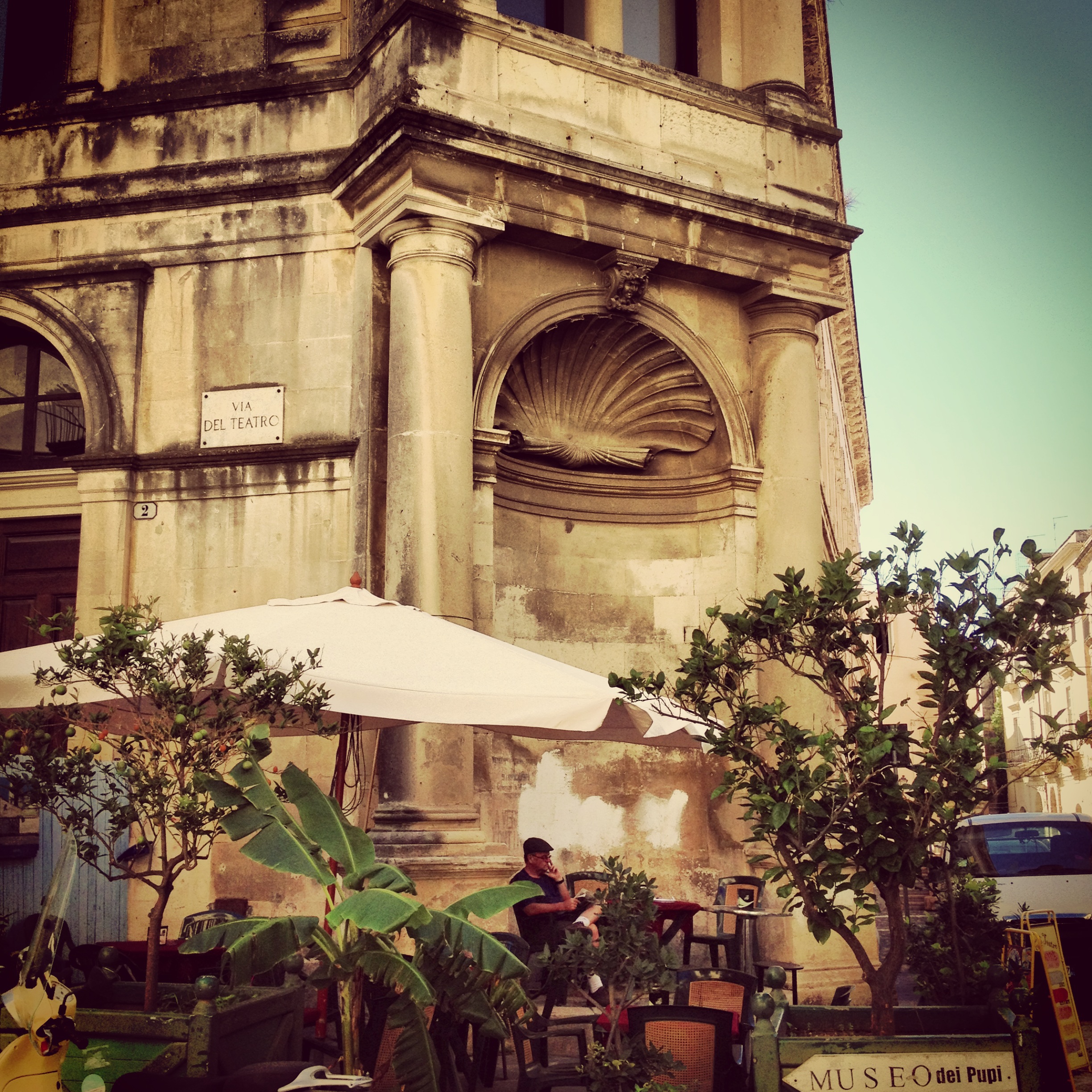 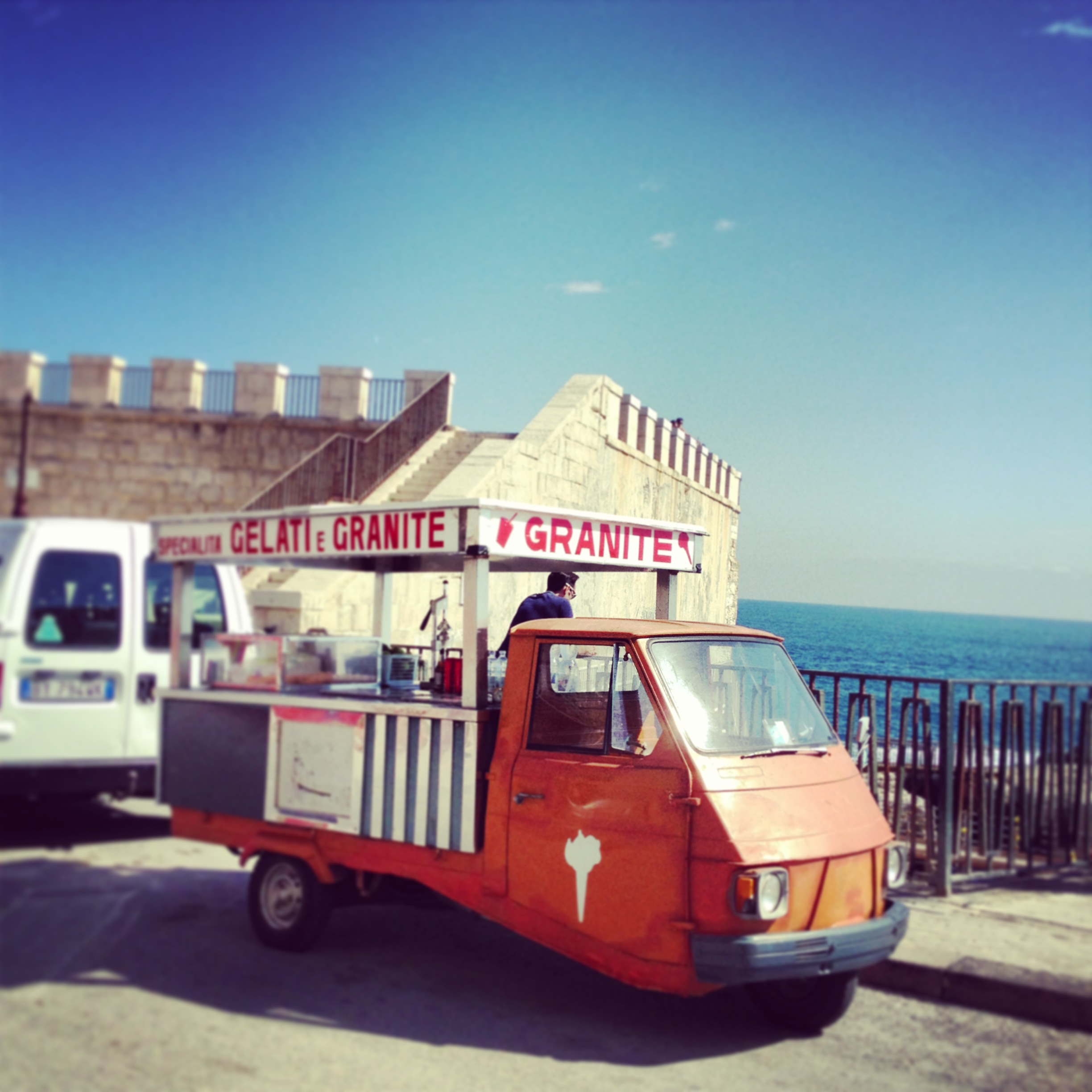 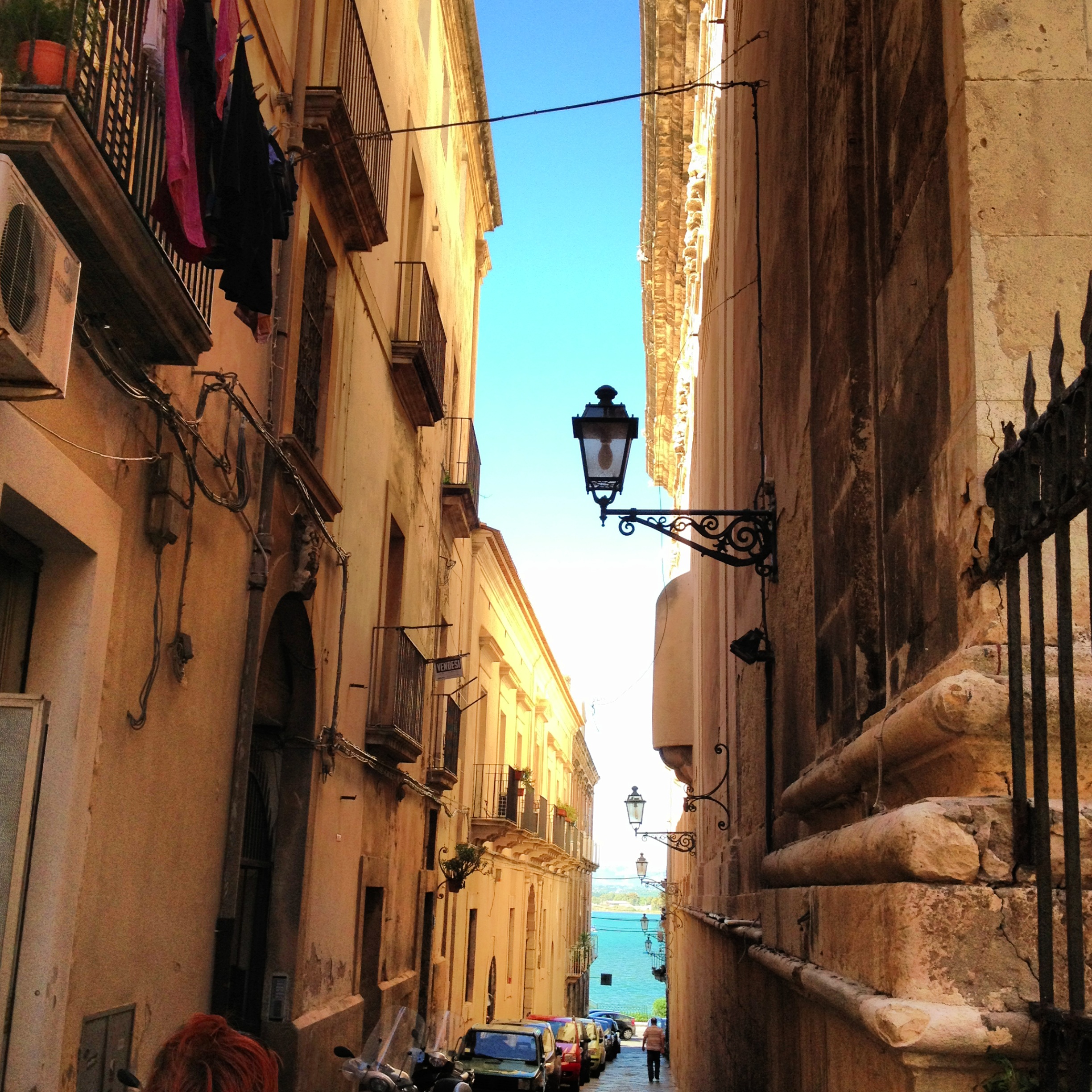 The historical centre is absolutely beautiful – the Duomo was adapted by the Byzantines (and later the Normans) from a 5th century BC temple, the Temple of Athena. You can actually still see the original ancient Doric columns on the outside of the cathedral. The cathedral is open 8am-noon and 4.00pm-7.00pm and is free entry. It’s situated in a beautiful piazza, fringed with restaurants and with cobbled streets leading off and away from the Duomo. 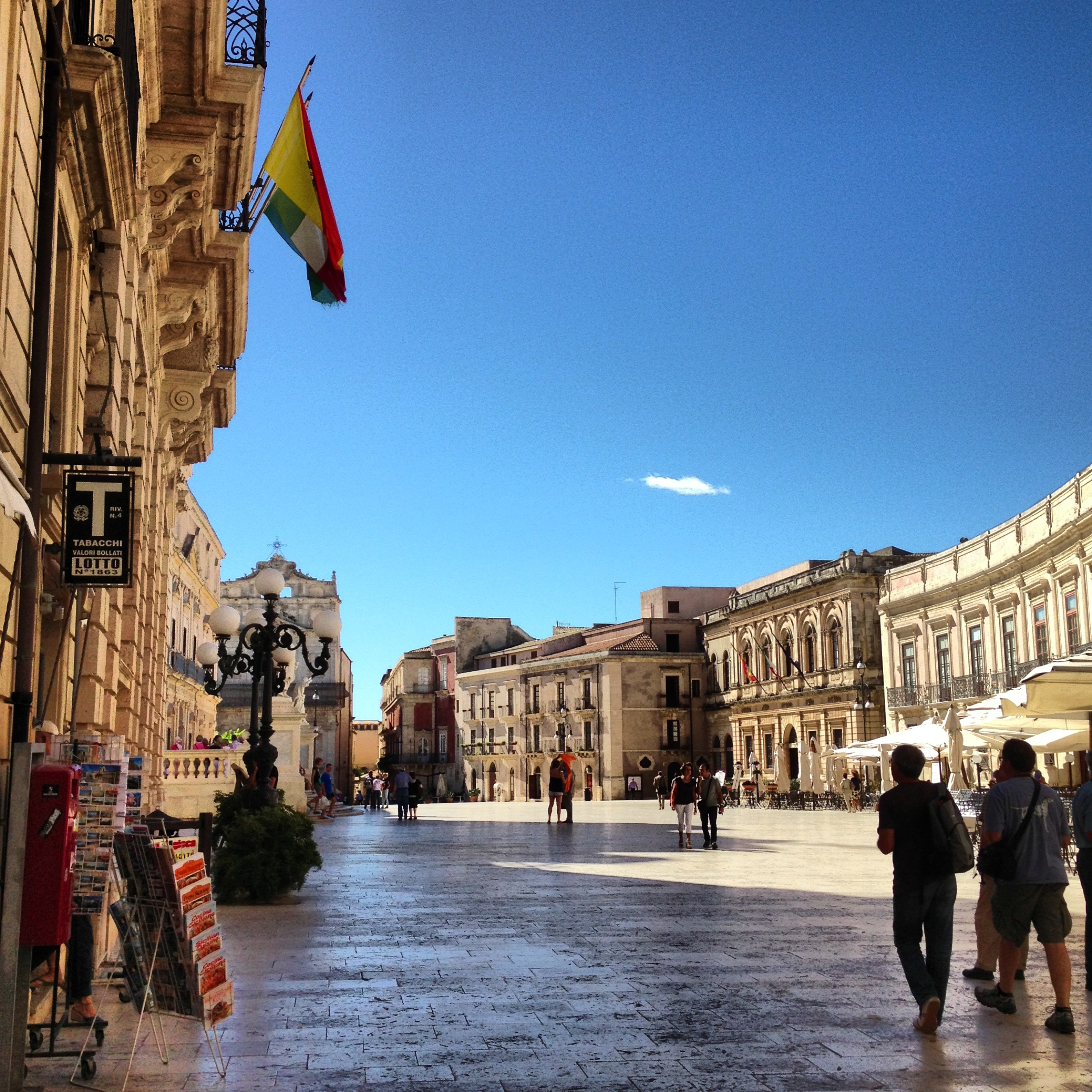 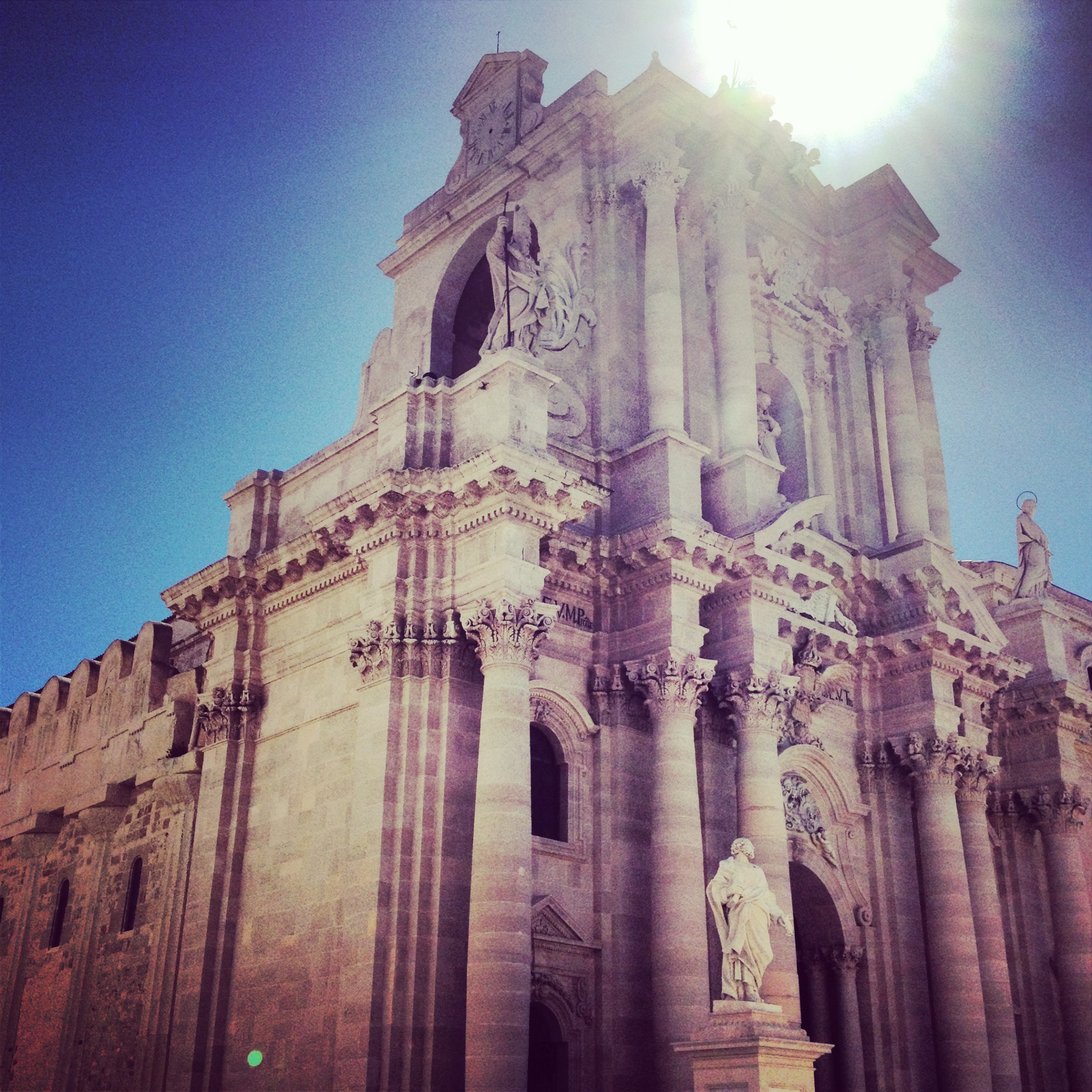 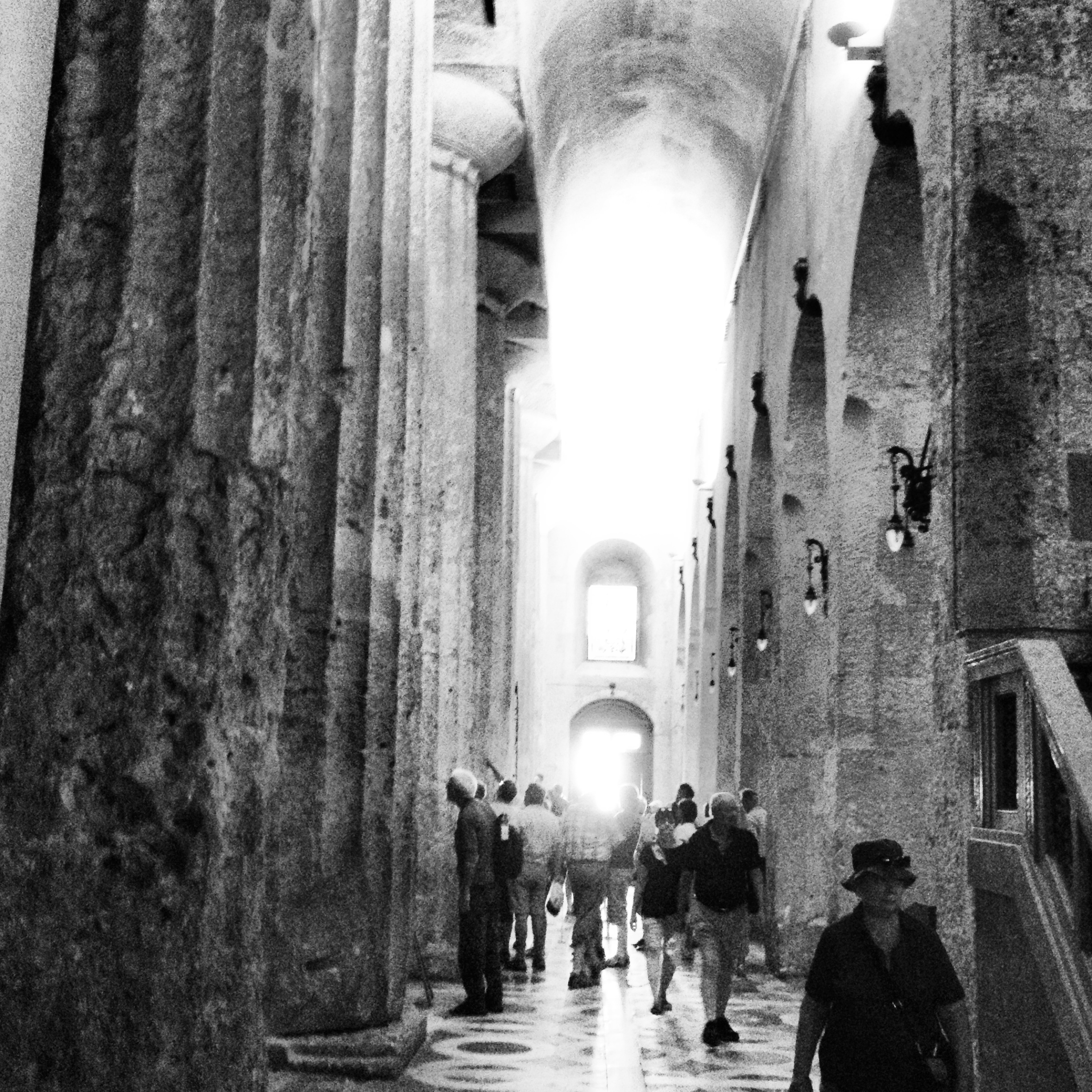 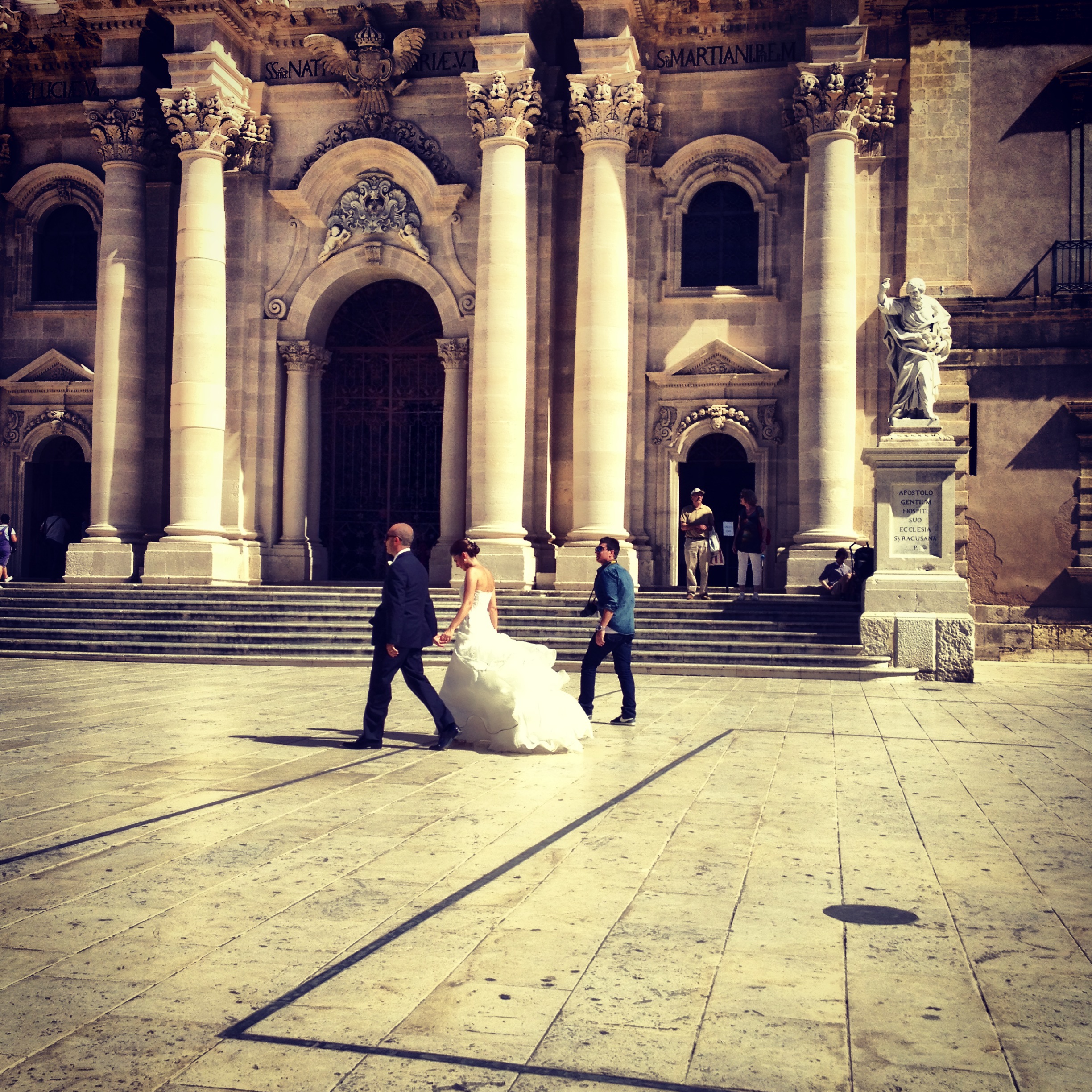 Piazza Duomo is a great place for people watching as it’s lined with excellent restaurants and chic bars – and given their location, the ones we visited, weren’t at all expensive. Day or night, you’ll definitely find someone or something interesting to observe. 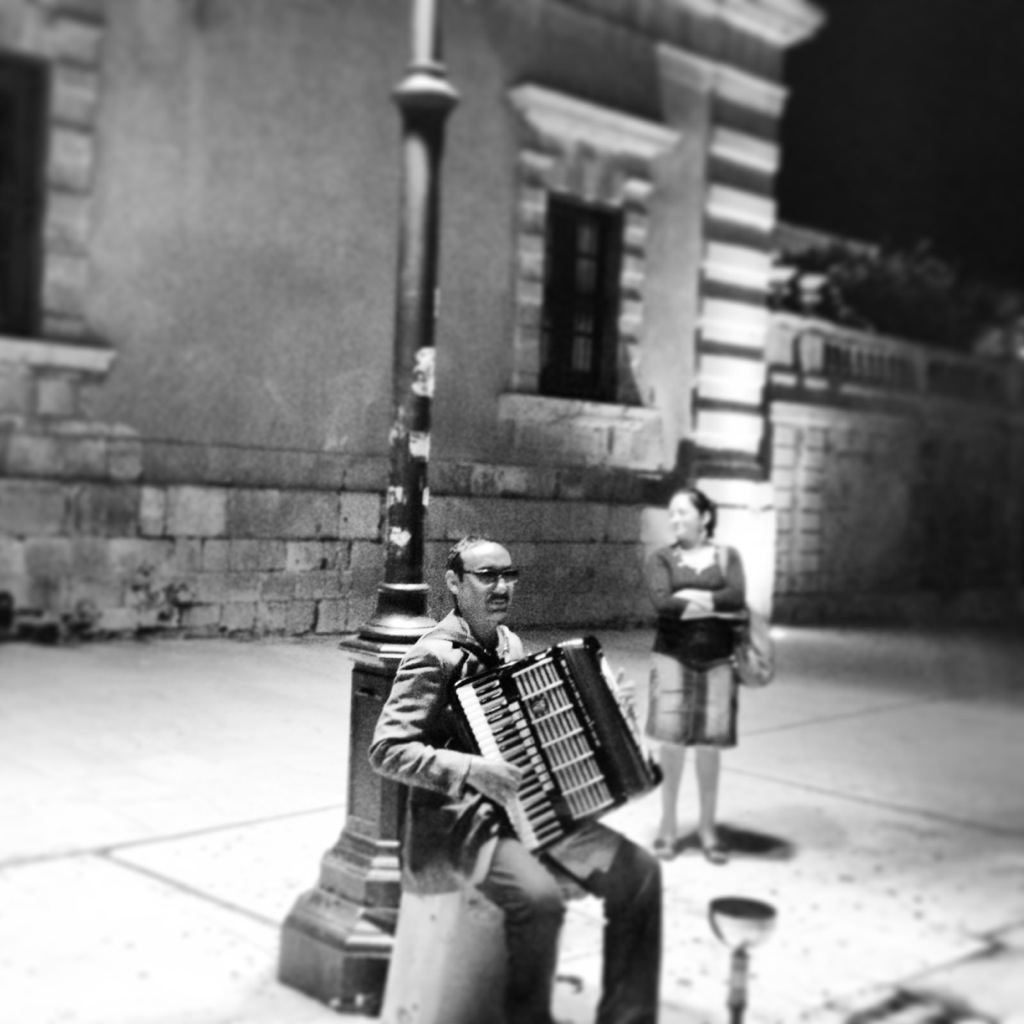 We stayed in a fabulous mezzanine apartment – Casa Marta – right in the heart of the old town, which we booked through Owners Direct. It was a beautiful mezzanine apartment, in a traditional Sicilian building right in the heart of Ortiga, which we stayed in for a week. This apartment was perfect for us. It is well equipped with everything you would need for a self-catering break, including wi-fi – although we were also trying to work whilst out in Sicily and found that the internet access wasn’t as good/reliable as back home. But hey, we were on holiday too, so got over it quite easily. 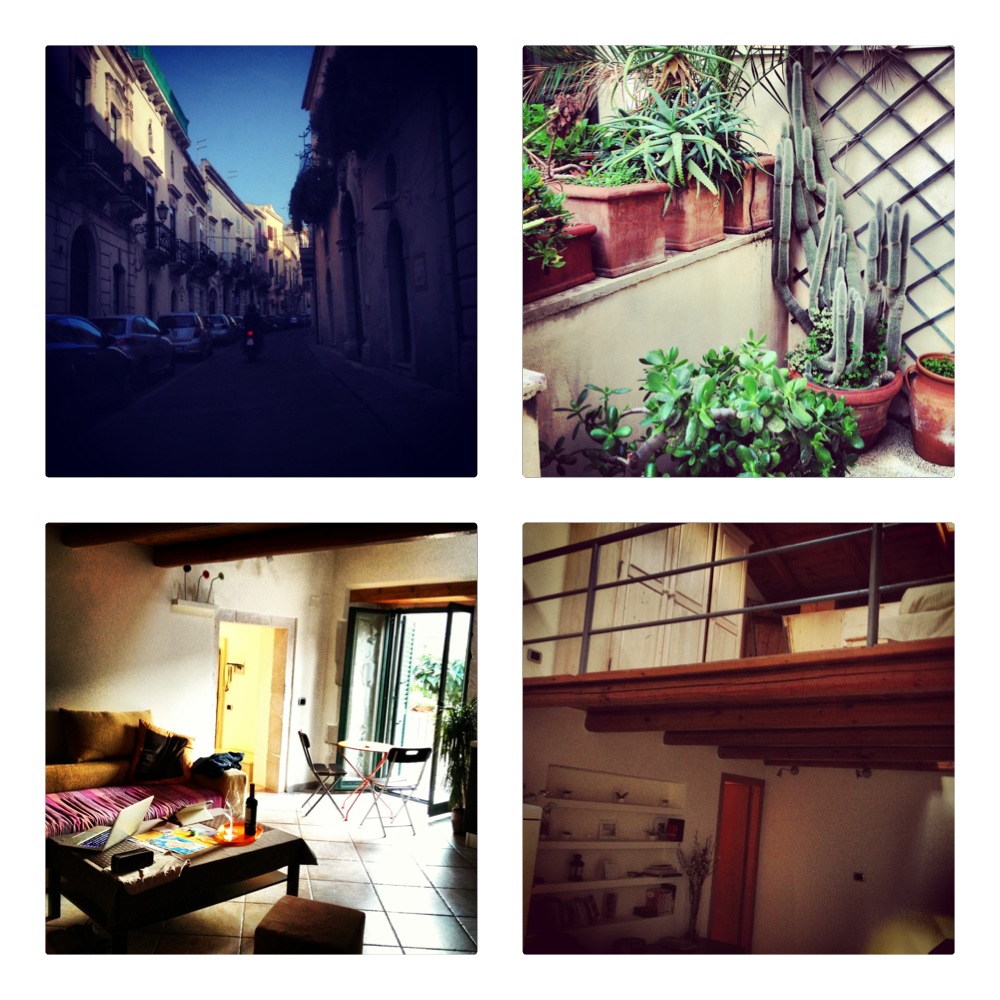 If you have children or mobility issues, it is worth knowing that the entrance to the apartment is on the first floor, up some external stone stairs, and that the bedroom is on the mezzanine level with an open staircase. Casa Marta is perfectly located for exploring & discovering Ortiga. It is literally 2 mins from the sea, although sunbathing options are limited as there isn’t a beach as such – there is a rocky outcrop, very popular with locals, but takes a bit of getting used to if you like to sunbathe on a beach. Piazza Duomo, the heart of Ortigia where the stunning cathedral is located, is a 5 minute walk away. The morning market is also just a 5 min stroll away.

Just around the corner from the apartment (which also had a lovely little flower filled balcony), was an amazing bar we discovered, called Clandestino – not only did it become our “office” when apartment wi-fi was weak, but it also has the best Spotify playlist. It was a super cool, laid back “office” sometimes the day, and a chilled out hang-out pre-dinner, in the evening. One of those bars that you remember for a long time. 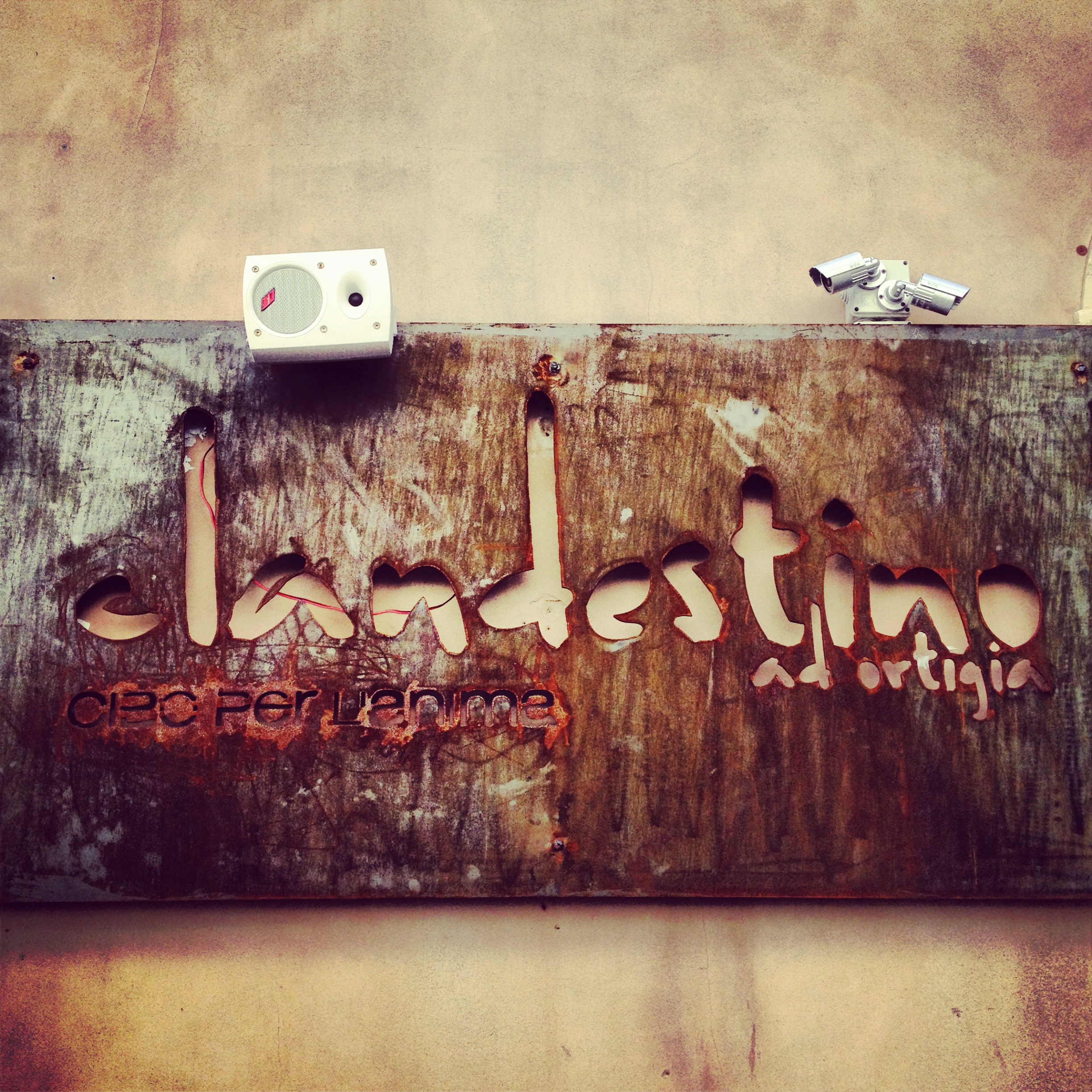 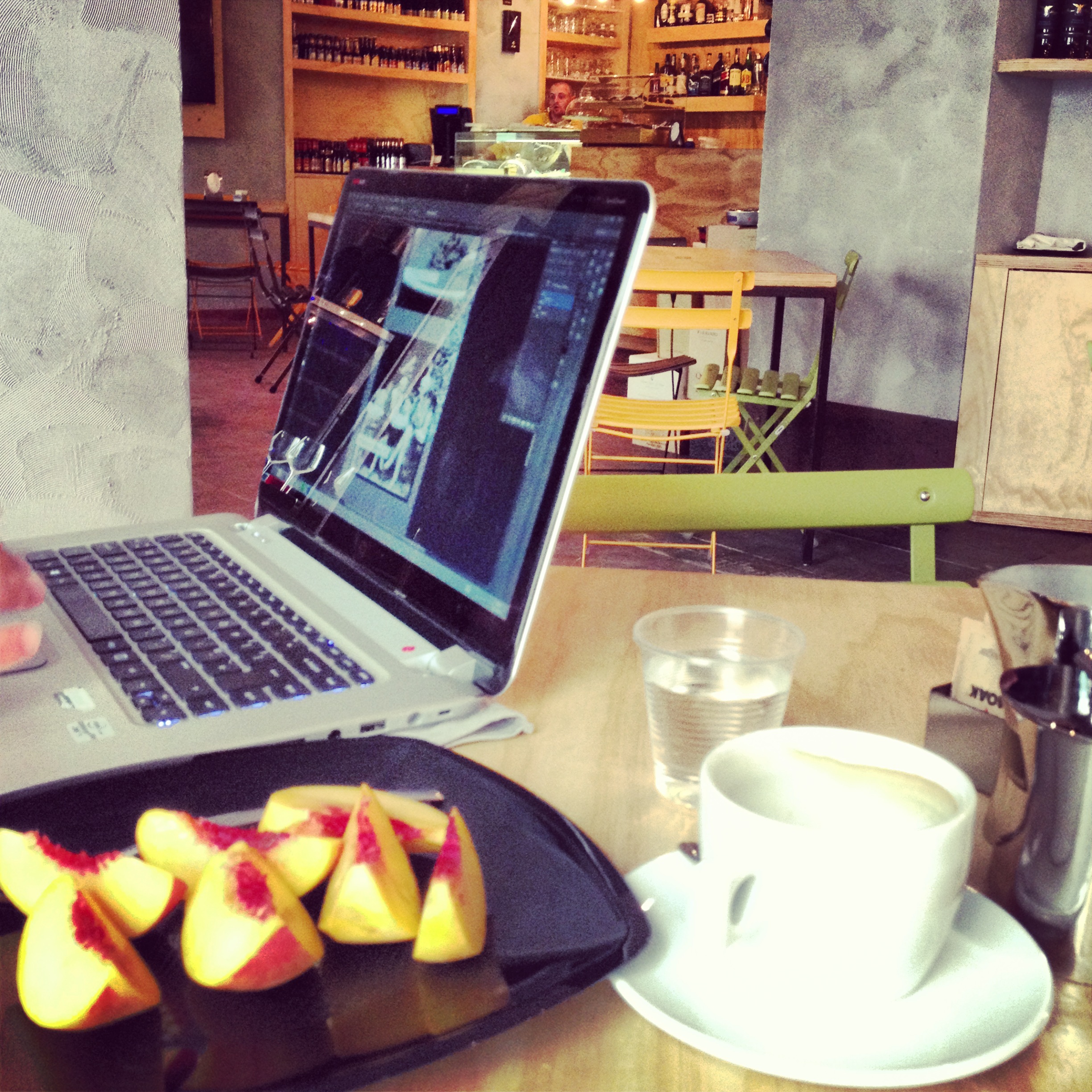 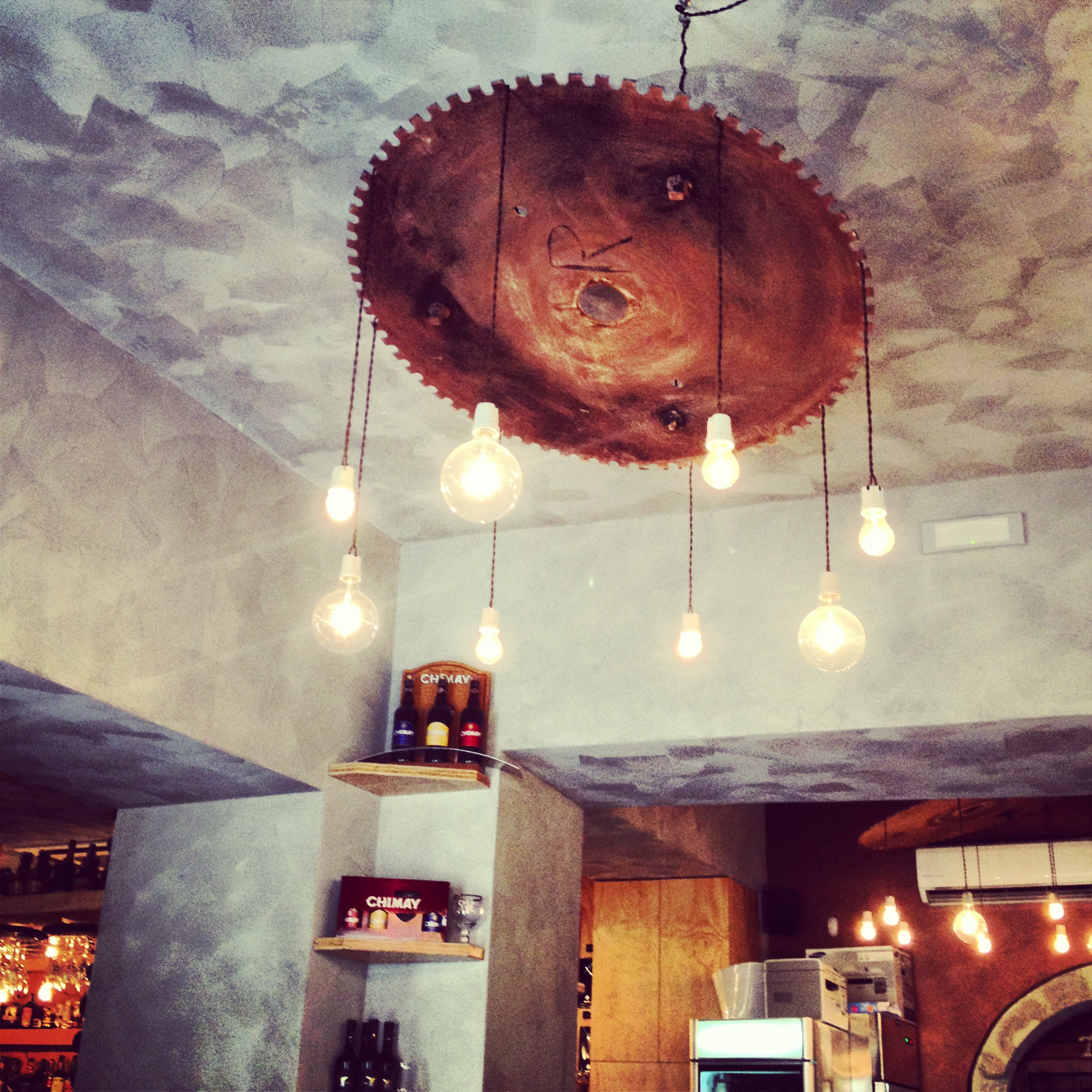 If you’re a sun-worshipper, Ortigia isn’t abundant with beautiful beaches – in fact, there’s only really a bathing platform. Very inventive though! And, so totally, Italian. I’ve never a nation of people so comfortable with rocking up to a piece of concrete, rolling out a towel and stripping off. To lie on the hardest surface imaginable. And still look unfeasibly cool… 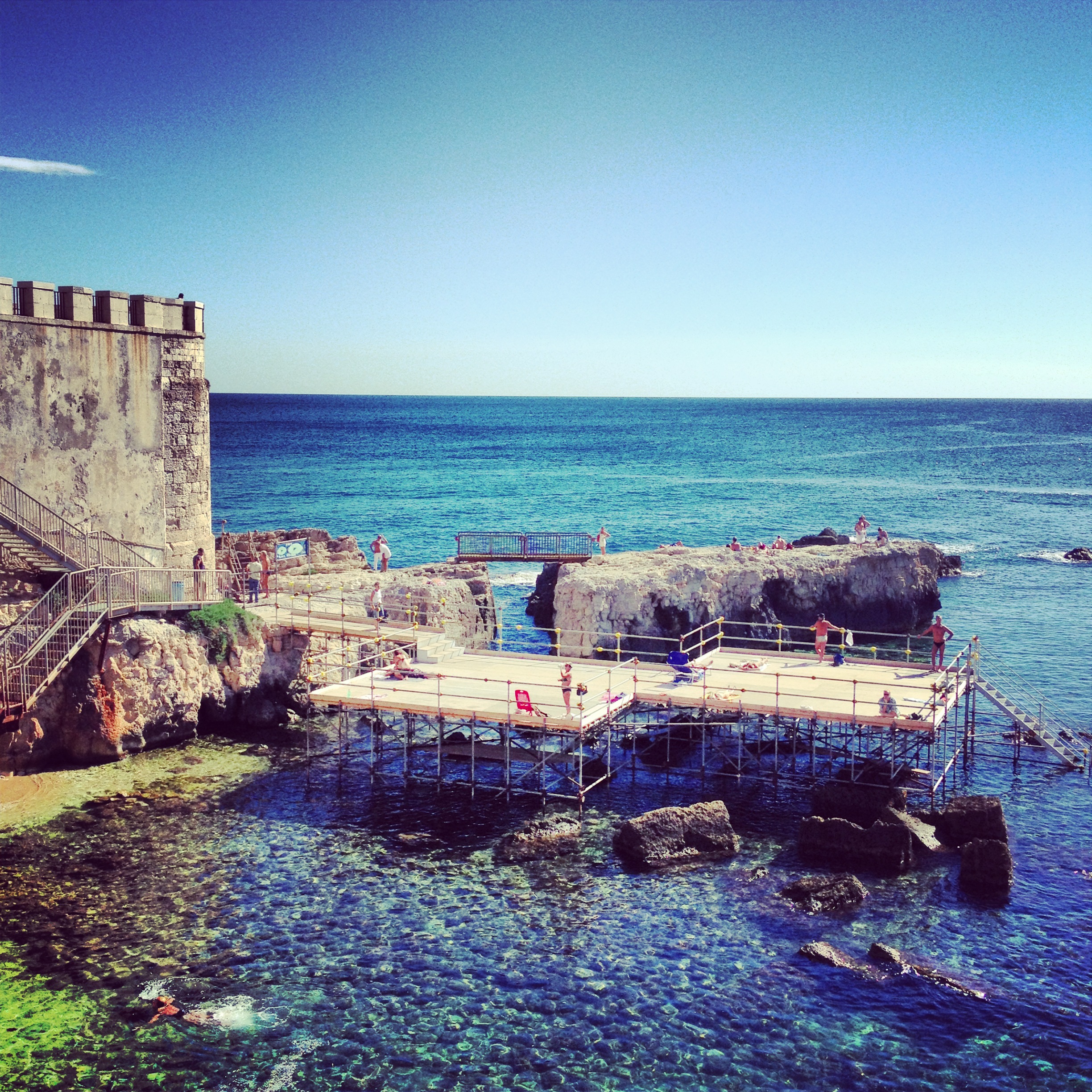 However, Fonte Bianchi beach is just a short drive away, and if it’s white sand and turquoise waters you’re after, this is the one for you…

We had a car for the duration of our time in Ortigia, which meant we could get out & about and explore beyond the city. (Just make sure you’re aware of parking regulations – part of the centre is closed to traffic between certain hours and if you are parking on the street, it’s as follows… yellow bays = residents only, blue bays = metered parking, white bays = free).

Being mobile meant we could get out to nearby beaches and we also took in Noto, a fabulous baroque styled town, to the west – and if you like visiting cemeteries, the one here is well worth a visit! We were also lucky enough to catch the annual Buskers’ Festival in Ragusa – a real highlight of our trip!

Having spent some of this year’s trip visiting part of the west coast, we can heartily recommend the east coast of Sicily. And, as an aside, I think Ortigia still holds the title for the best pizza, I have ever had. The simplest of simple – bufala mozzarella and cherry tomatoes – in a small. family run trattoria, on a Sunday afternoon. And, if hadn’t been raining, we’d probably have walked on by to look for something a little more trendy looking. So, thanks to having no umbrella, the memory of the Sicilian pizza lives on. 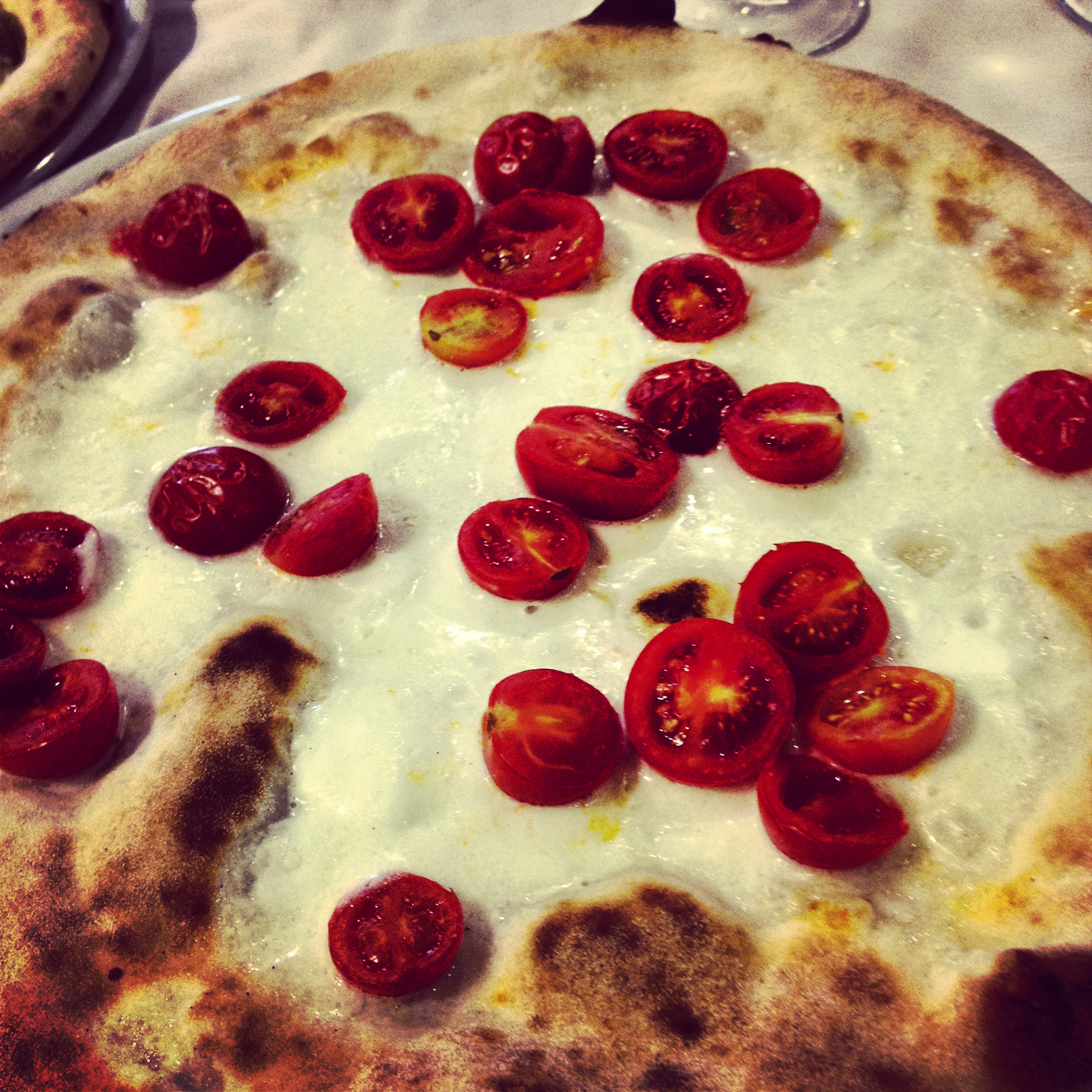 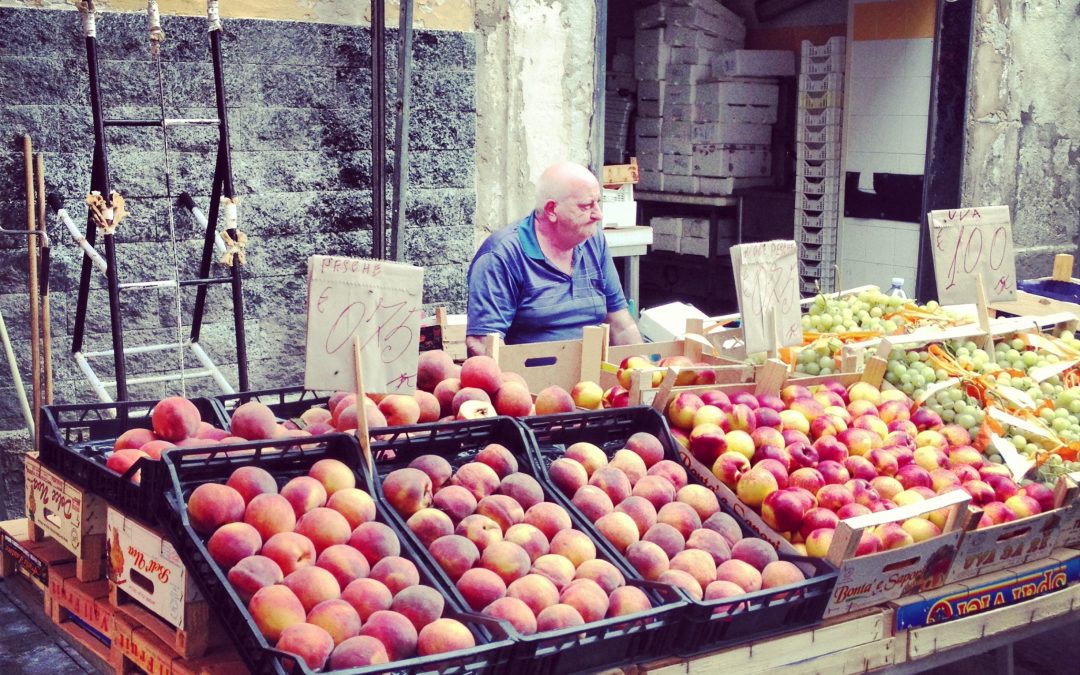 The early morning market in Ortigia, Siracusa (Siciliy), is a sight to behold. Whilst we do have some excellent fresh produce markets here in the UK, this Sicilian one blew us away…

Every kind of fresh vegetable and fruit seemed to be available, along with fish caught that morning, cheeses, breads, olives, oils. The sheer number of stalls was incredible – and the banter between stallholders, vying for buyers’ attention was a piece of theatre in itself. The market is raw and gritty and if you have a delicate constitution, certain areas should definitely be avoided! The fish section, for example – especially when the traders are competitively chopping, slicing, skinning and discarding the less savoury parts of the fish from the parts which will bring the most money.

The hustle and bustle is palpable. There’s no polite queuing here – if you see what you want, you have to push forward or someone else will have what you have your eyes on. Hands thrust forward, people jostle, and shout over you. Again, if you prefer the more sedate pace in Waitrose, Ortigia Market may be a bit of a shock. Underfoot, you’re likely to stand in produce which has fallen off stands, or the discarded parts of vegetables. It is sluiced down, but this all just adds to the feeling of chaos.

However, look closer, and you’ll see it’s not chaos at all. It’s carefully manged and orchestrated piece of open air theatre. All of the stall holders know their parts. The lead actors – the fish guys, it would seem – play to the crowd magnificently. Cameras and phones are held aloft, snapping away and recording this free entertainment, presumably to later be posted online. Making stars out of the performers. 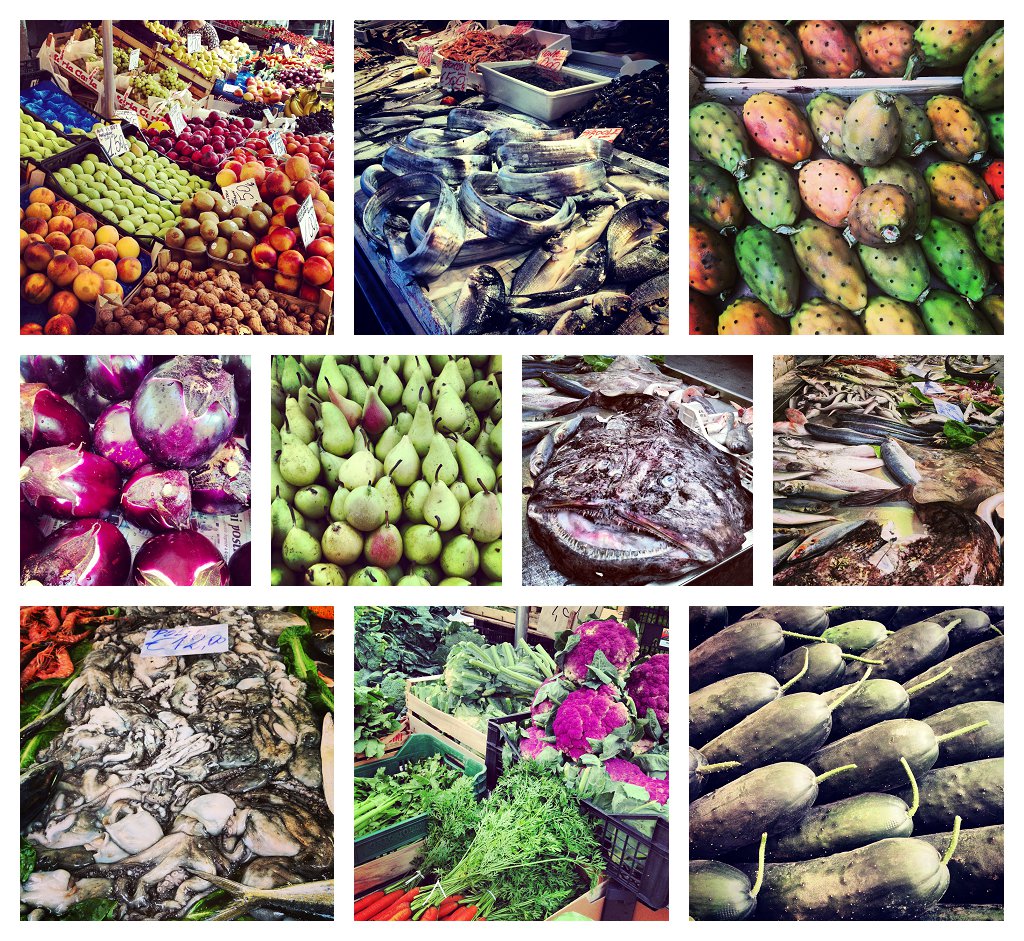 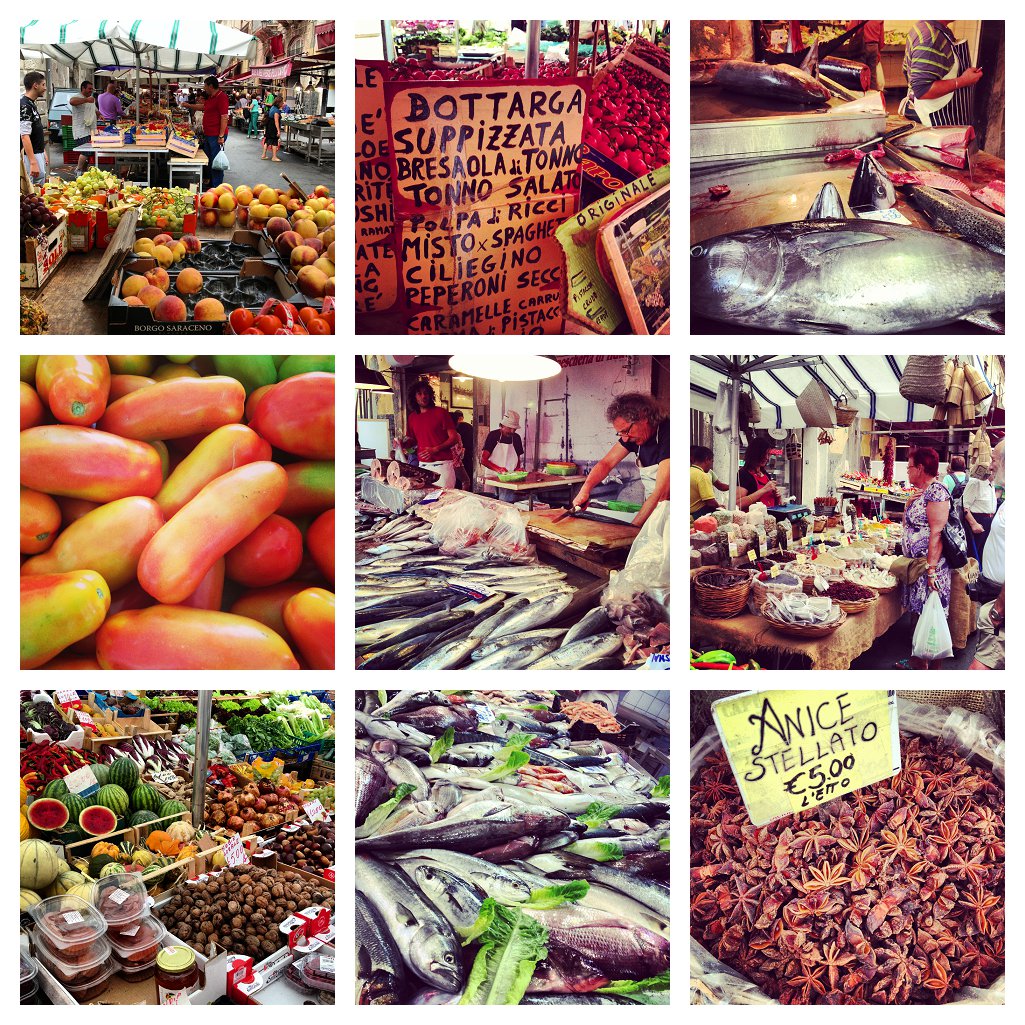 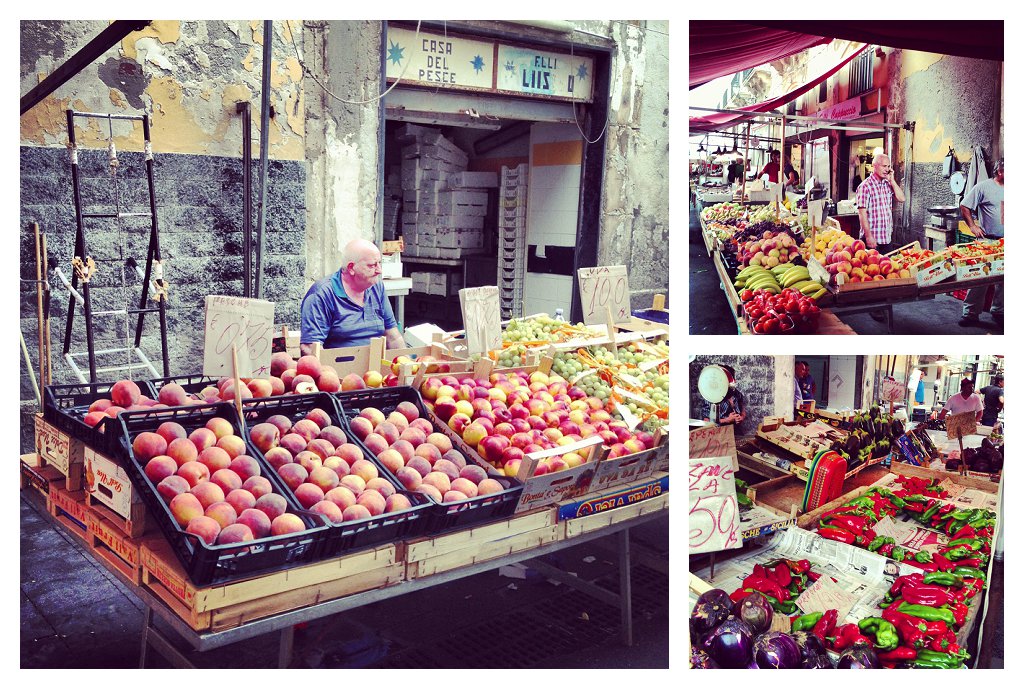 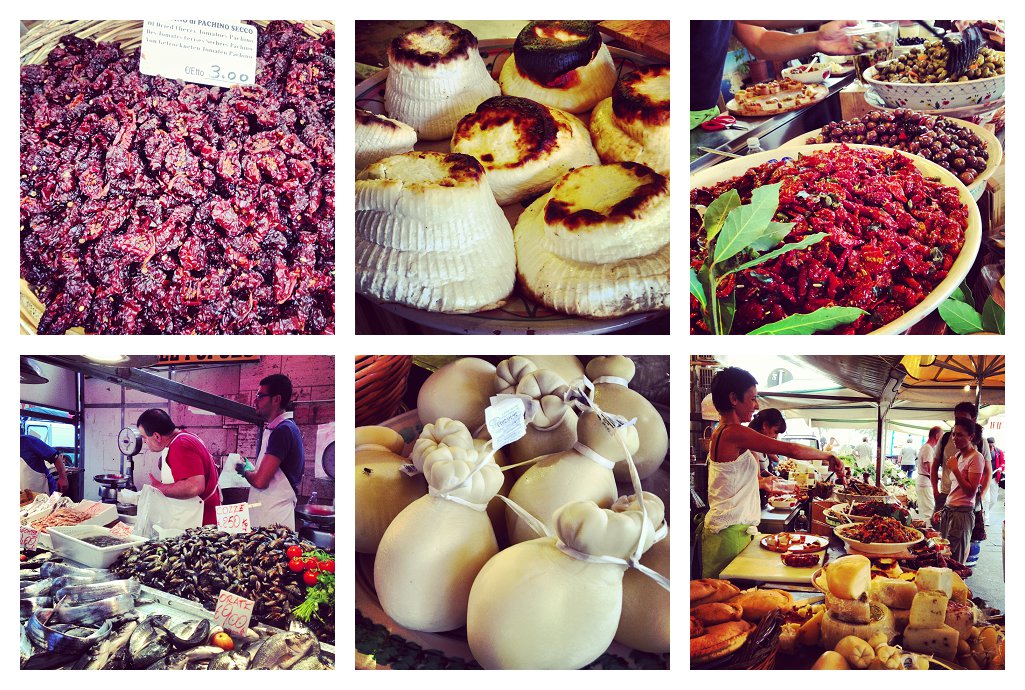 The market, like all Italian markets, is not just about the food – but this is the star of the show. We saw people leaving with mattresses and bedding from the household section. Electrical goods are available, as well as agricultural. Religious artefacts can also be purchased. Clothes, ornaments, shoes, household products, flowers, plants, pet products. Everything you could need, in one vibrant corner of Ortigia.

If you ever visit this authentic, totally Sicilian city, our advice is, take in the market. If you need any more convincing, here’s what Think Sicily has to say…

Turning left at the entrance to the island will take you immediately to the colourful daily morning street market, which sells a fantastic array of fruit, vegetables, fish and meat. At the end of the market is a must-see for food lovers: a delicatessen of rare quality, called “I Sapori dei Gusti Smarriti” (literally the flavours of lost tastes). Here you can find cheeses, hams and cured meats of the very best quality, many of which, especially those produced in Sicily, you will find nowhere else. There is also an excellent assortment of wines, condiments, sun-dried tomatoes and other Sicilian delicacies made by the shop’s owners in their “laboratory”.