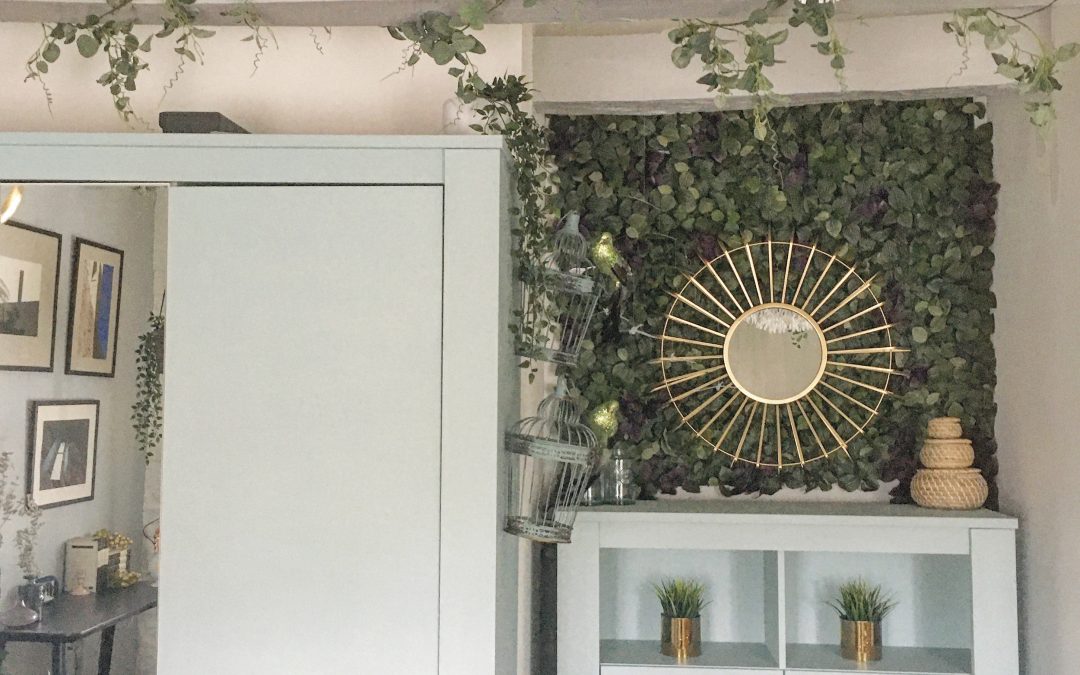 Grey & White, with a Woodland Vibe

We’ve never had so much space and shape to play with before, in any of the houses or flats we’ve lived in, and our stone house has proven itself to be a complete source of surprises. Each time we think we’ve finished somewhere, we see something else that could be done. A room in point is the largest bedroom, which has gone through quite a few changes. The initial transformation was very simple – we just painted all of the walls and ceiling white, and woodwork the same soft, very pale blue which runs through the rest of the house. Furniture was bought quickly, out of necessity – although we weren’t unhappy with what we’d bought, we weren’t ecstatic with the choices. 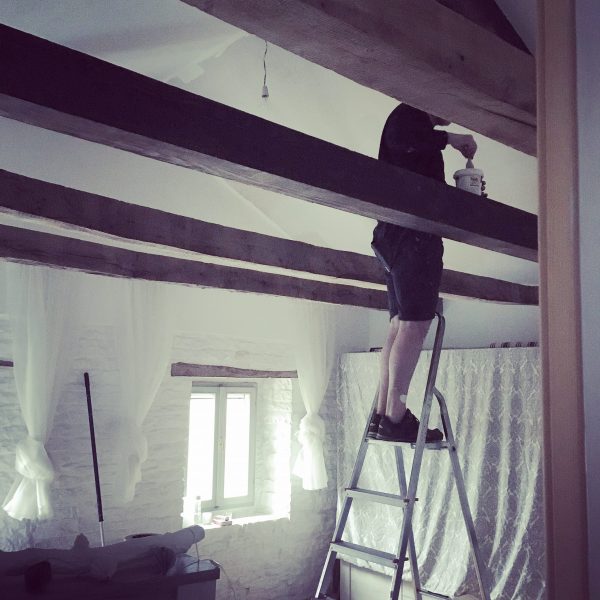 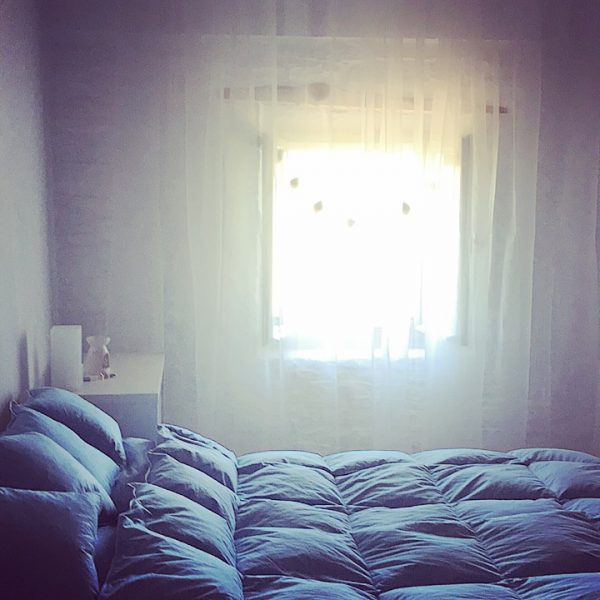 Pretty soon after everything was painted white, we felt that the room still needed something else. The pine floor boards had never been treated and so these were sanded and stained. It turns out that “Walnut”, the colour we were trying to achieve, is not actually walnut here – the first attempt was more of a honey colour and we really disliked it, so bit the bullet and went for “Ebony”, a colour much closer to what we had envisioned. 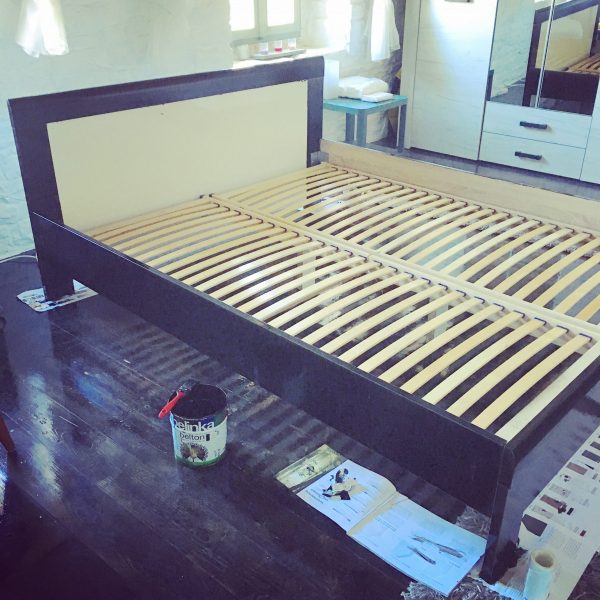 The wooden bedframe was also stained, giving us a room that was beginning to get *there*. However, the beams were still in their naked state, and because of the size of the room and the height of the ceiling, it still didn’t feel right. At least we were able to add these funky shades from IKEA – I’ve always liked these, because of the shadows they throw out, but have never had a space large enough to accommodate them. Two of them now hang between the beams – and work really well because of the space around them. 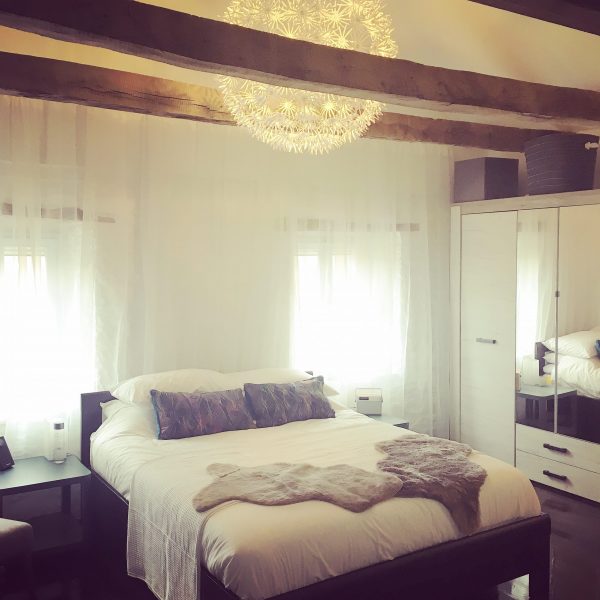 The treating and painting of the beams was definitely one of those jobs we put off, because of the height of them and the fact that once again the room would be in chaos. With hindsight, we really should have tackled them at the beginning, but there was just so much to do, that we decided to revisit them at a later date. They have now – thankfully – been treated for woodworm, caulked, undercoated, primed and topcoated. And, will never be touched by us again – so it’s just as well we love them in their new state. 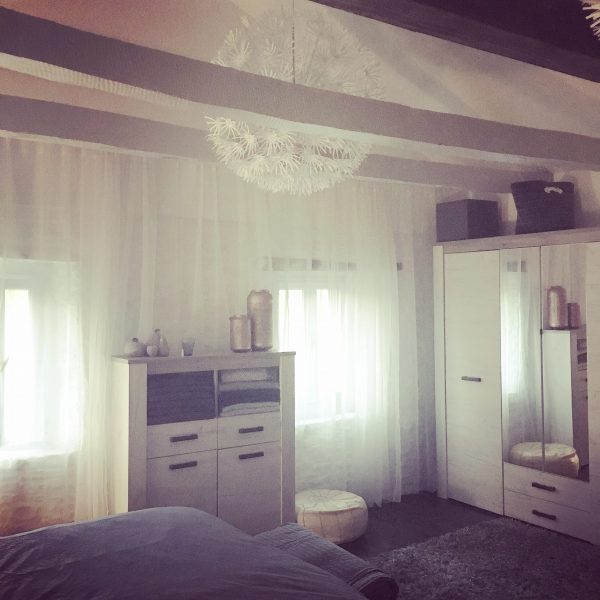 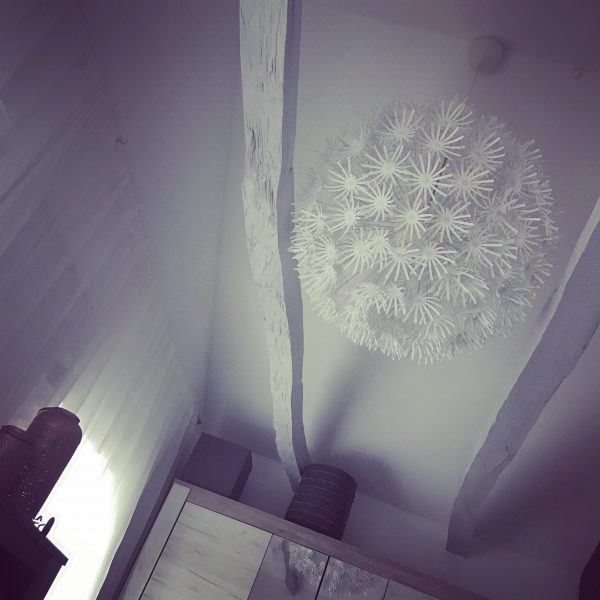 Because of the ongoing renovation around the house, we’ve regularly found that the bedroom – purely because it has the space – becomes the “overspill” room, where pieces of furniture from elsewhere are moved. This has happened over the winter with our SKARPÖ outdoor armchairs (from IKEA) – although we made the best of disguising them with faux sheepskins and cushions. And, did actually use them. Artwork and plants and rugs soft accessories were also introduced to soften the room. 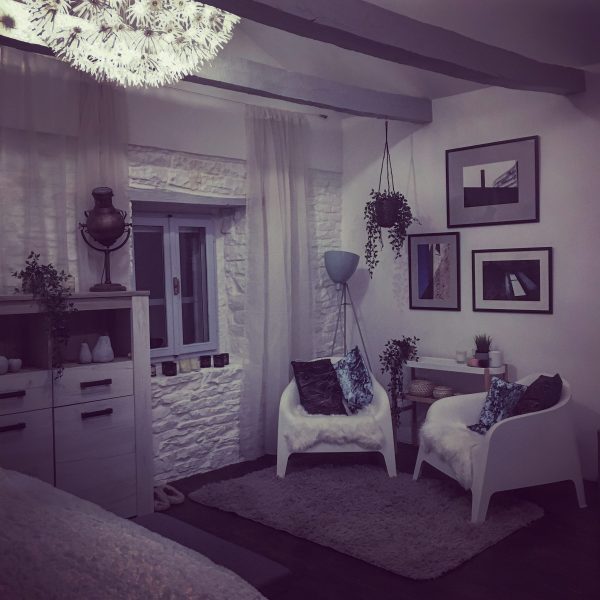 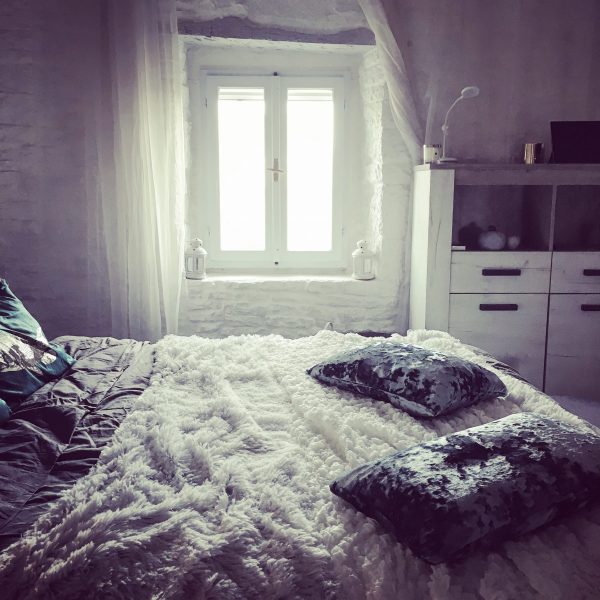 Then I got into my head that what was missing in the bedroom, was a feature wall. The white was just, well, too white. And scrolling through Pinterest I found I was becoming attracted to dark greens. It did take a little persuasion, but off we headed to Pula to our local B&Q style store (no mean feat as it’s a good three-four round trip) to get the paint mixed. I did really, really. really like the green but there was just something that wasn’t quite right. I couldn’t work out if it was the shade of green we’d chosen. Or whether it didn’t work against the ebony floor and grey beams. But there was something. I did try to surpress it because I knew I wouldn’t be at all popular even hinting at a colour change, so we went with it for a good few months. 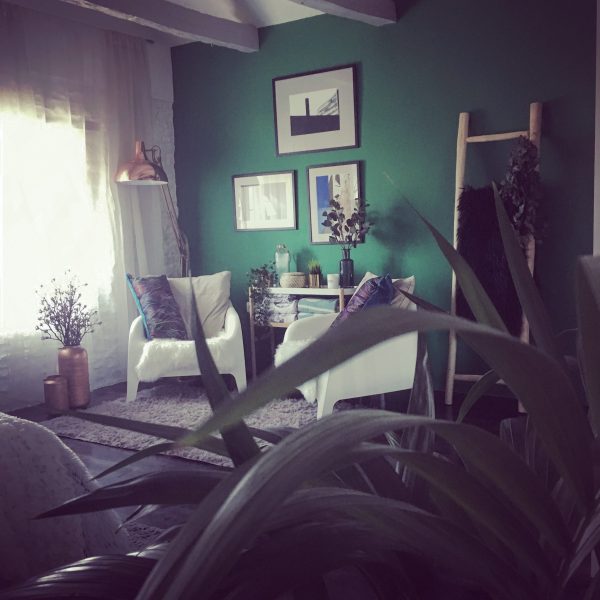 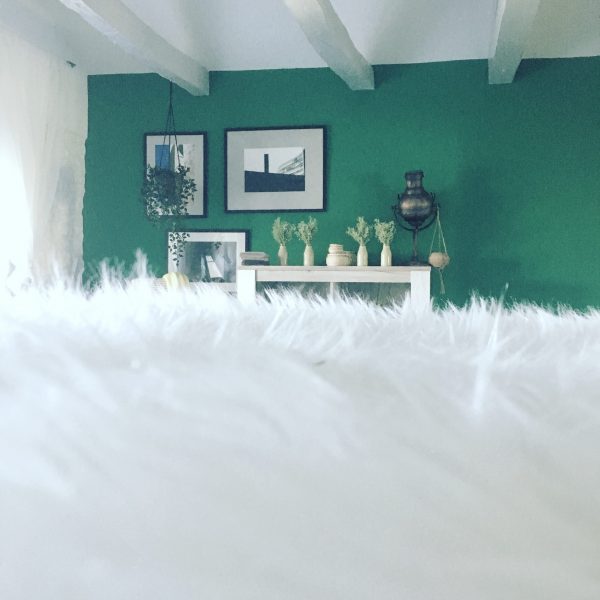 But, it was finally broached, and it was agreed that although we did love the green, it wasn’t working in the bedroom. We had to have a colour that would sit well against the dark floor and the grey beams – and so of course, what better than another shade of grey? All of a sudden, the room was starting to work for us, and after three years, we were finally starting to create a room where we could feel completely relaxed. 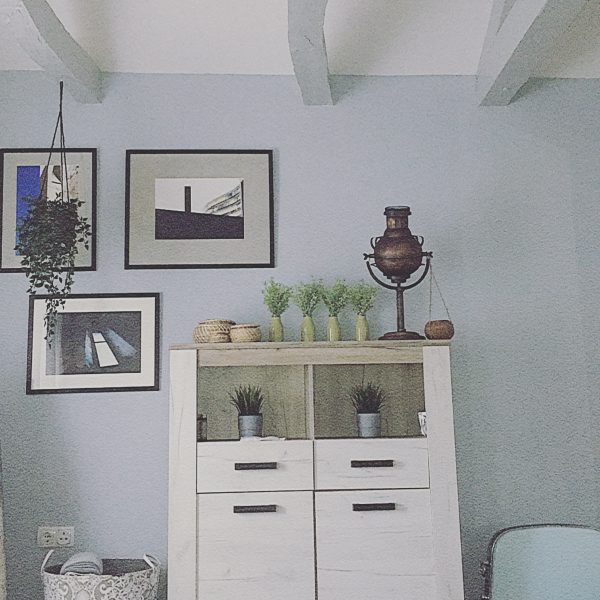 Over Christmas, back in the UK, we decided that we might as well go for it in terms of finishing the bedroom, once and for all, and purchase the things we needed, which we couldn’t easily get out here. We decided that it was time to change the look of the bedroom furniture, which we’d bought in haste a couple of years earlier, and so chalk paint (in Vintage Duck Egg Blue) and finishing wax was purchased. First job, on our return after Christmas, was the painting of the bedframe, wardrobe and cabinet – and wow, what a transformation. 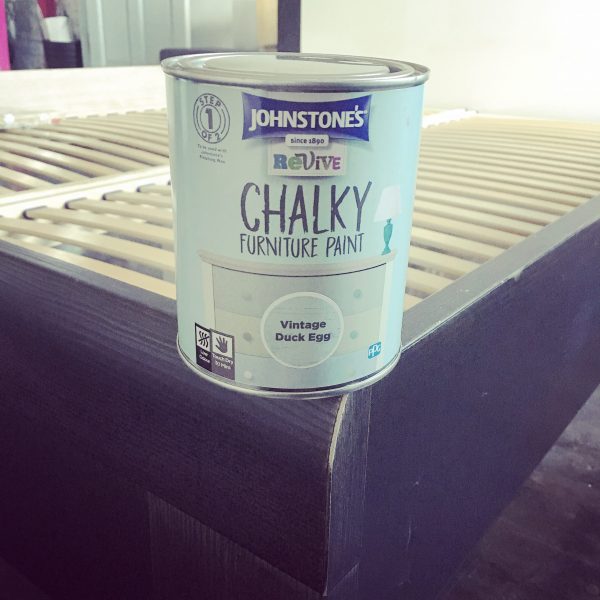 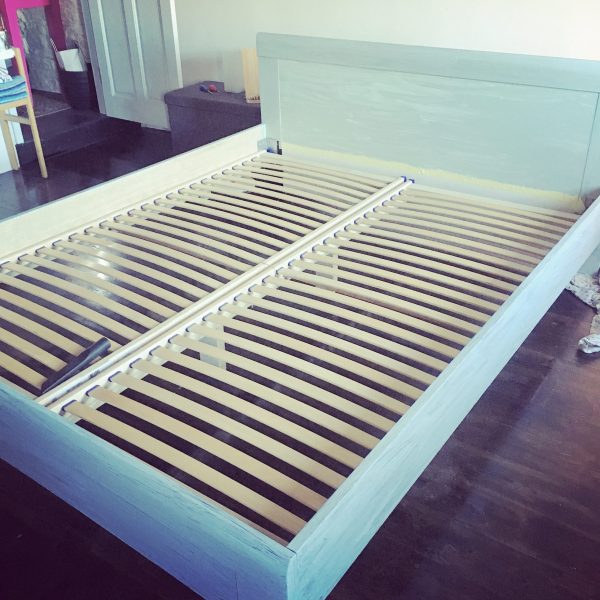 And of course, now that everything was tying in colour-wise, that floor couldn’t stay ebony! Luckily, we always have lots of deep, deep navy blue floor paint and this was the next piece of the make-over jigsaw. 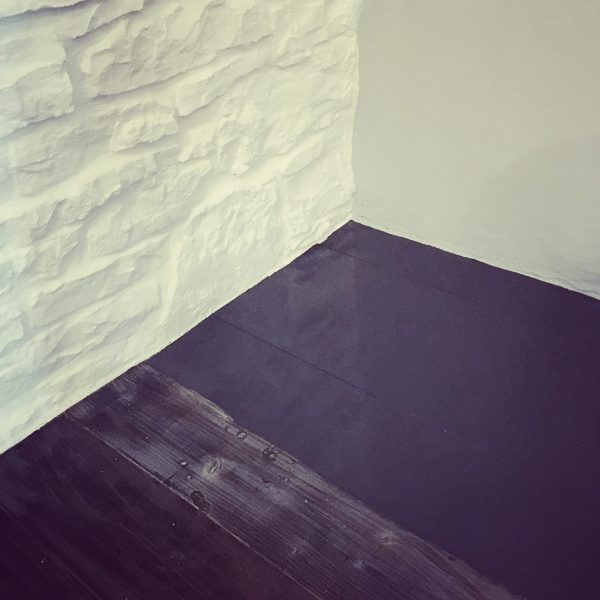 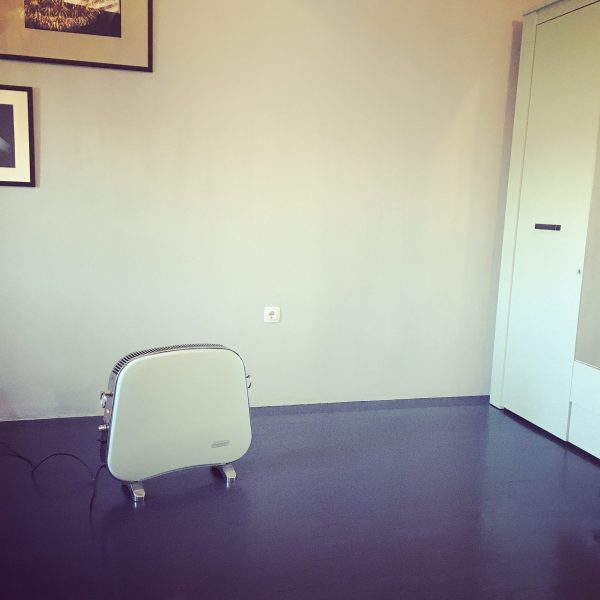 All of the upstairs doors in the house are fairly basic wooden panelled doors – the intention has always been to replace these, but so far we’ve not got around to it. I’d recently decoupaged the inside of the downstairs bathroom door, with maps from our travels and decide to spruce up the bedroom door, internally, using the same method. I liked the idea of the pages of a novel – as our copy of “Ulysses” by James Joyce was never going to be read, it was decided that this would be the novel which would be used. And with so many pages, not only was the back of the door done, but also the floating shelf above the bed. Which was then accessorised with faux sprigs of eucalyptus, which were left over from Christmas wrapping. We also had a small woodburner which had never been installed – in cream and black. It had never found a home and we didn’t really like the colours, so a quick spray of grey paint, and it had a new look. And a new home. 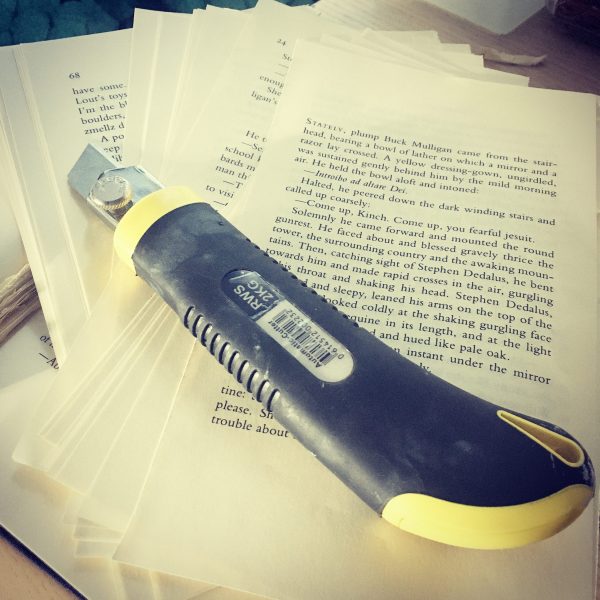 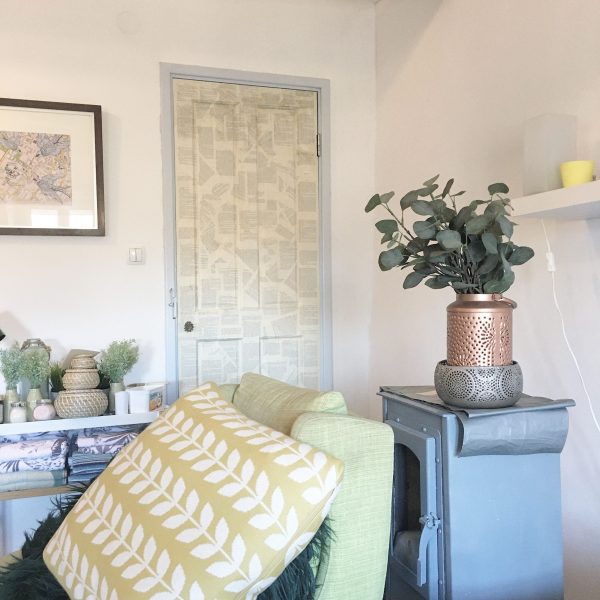 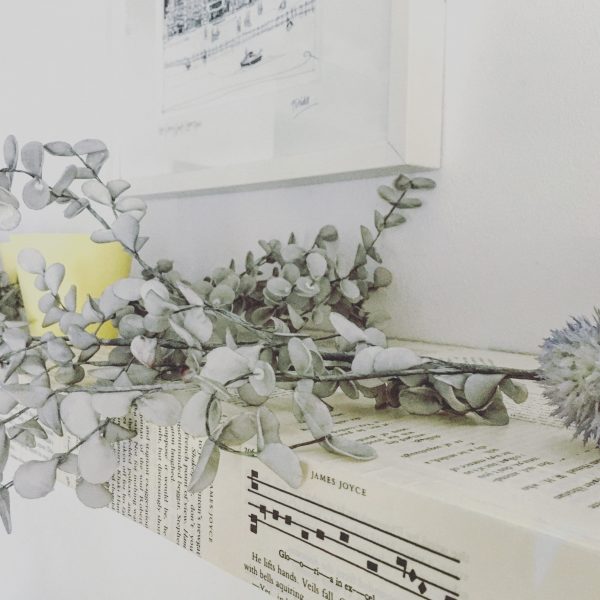 Again, because of the height of the room, we knew that the beams could look even better – and so lengths of faux foliage were brought back from England after Christmas. These particular ones were from The Range and are definitely the best ones I’ve seen – they are very realistic garlands with curling tendrils, so do look very realistic. If you do like them and live in the north west of England, please don’t buy them all, as I’m intending to restock on our next visit! 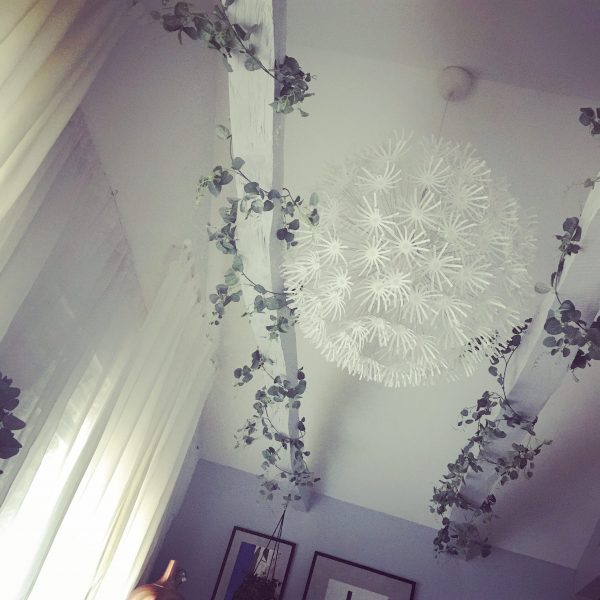 The recess in the bedroom has always had these squares of ivy (from IKEA), again to break up the white. And to help create a little more of a magical feel. A kind of woodland vibe. The beautiful mirror was a gift at Christmas – it was originally black and would have looked fab in this colour in the living room or well room, but I knew that this recess was the perfect place for it. The black however, wasn’t quite right, as it couldn’t really be seen. The gold spray paint was already out, as I’d done the handles on the wardrobe and cabinet, and I knew the mirror would look stunning in this colour. And, it does – a proper sunburst, nestled in the ivy wall. I also couldn’t resist the three green glittery, sequined pigeons, with the long feather tails and golden beaks, spotted in the post Christmas decoration sale in John Lewis. I had no idea where they’d go, but just loved how playful they were – but they look quite beautiful now, perched on the vintage birdcages which have been attached to the side of the wardrobe. 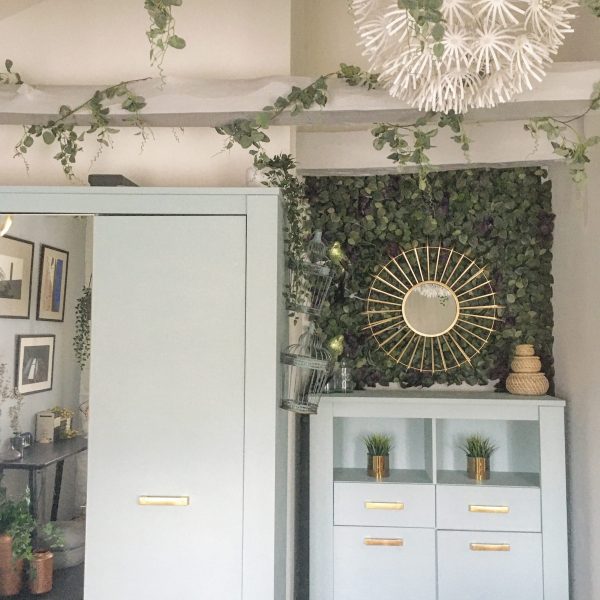 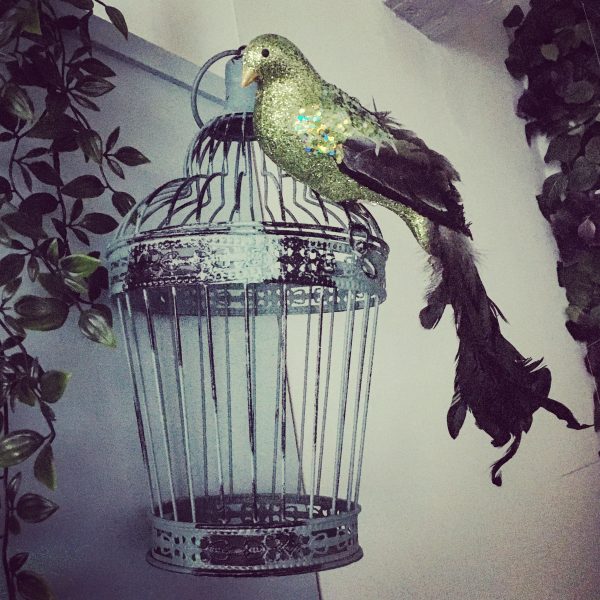 Mustard rugs (Dunelm Stores) and side lamps (Sainsburys) and a trio of gold mirrors (Dunelm Stores) were also brought over from England, and a white bedding set was dyed yellow, to sit against the Eve mattress. One of the best mattresses, ever, btw. The boxes at the bottom of the bed are used to store bedding, but are strong enough to sit enough on – the perfect height for painting your toe nails 🙂 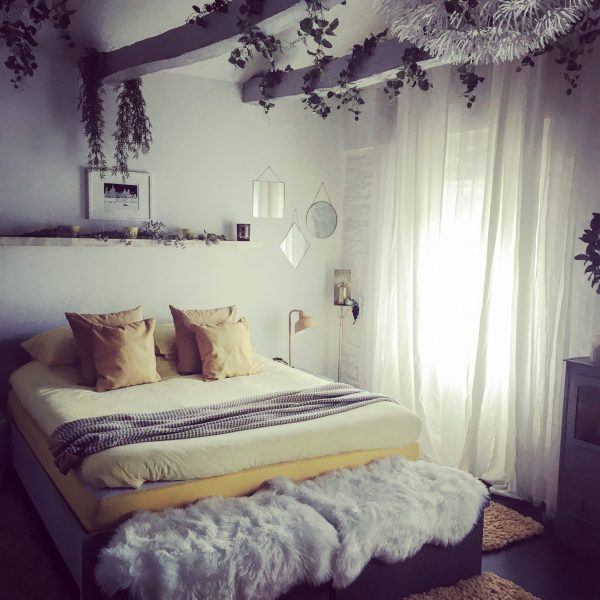 Opposite the bed, we’ve created a lovely space, which is so beautiful in the evenings, when the light is just fading. A perfect corner to while away a little bit of time, in a room which now, *finally* think we are very, very happy with… 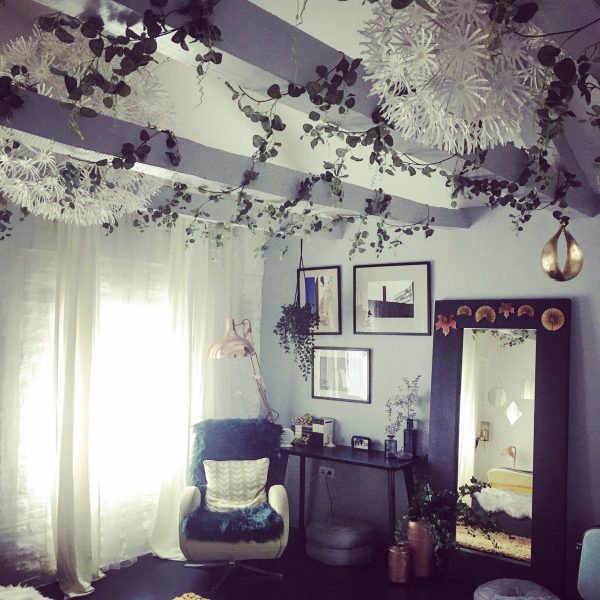