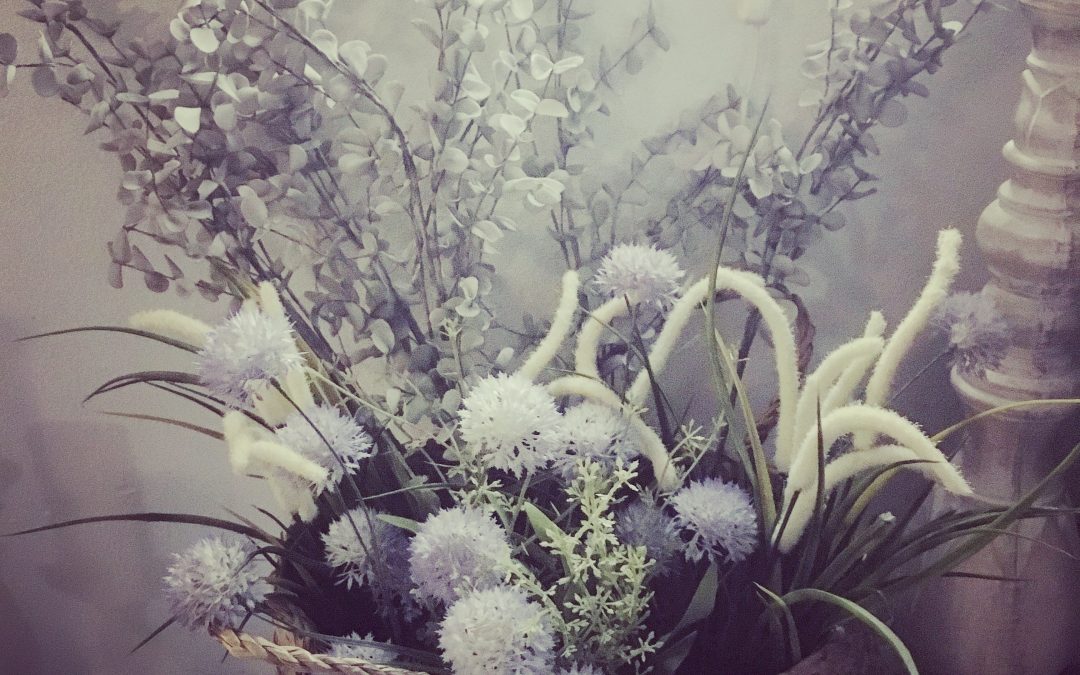 I love fresh flowers. For the third year running, we’ve seeded up a few areas of the garden with wild flowers, because we believe that one day soon, these seeds will become something more than spindly stems and limp hanging heads. I always think something like this will emerge, because you’ve got to believe, haven’t you? But so far, not much luck… 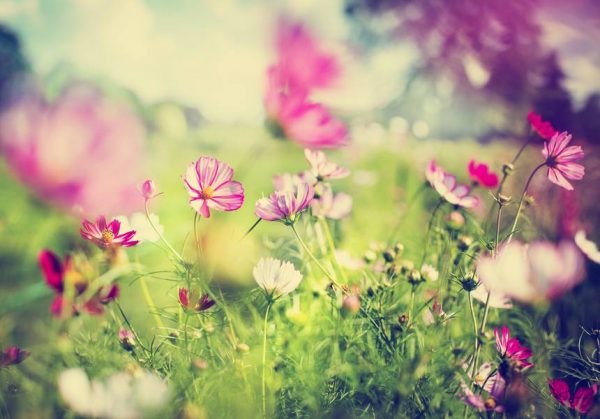 Whilst we persevere outside – the seeds have been sown again – we’ve decided to go faux inside. The one parlour palm that we have got inside, has dwindled in size, as we forget to care for it. So, we’ve gone faux. Fully fake faux, because however forgetful we are, we can’t kill it and it will always look pretty. The house now has a plethora of greenery and unless we burn it down, the faux should last as long as we’re here…

This is a beautiful twine from Rockett St George. Bit pricey given what we’ve discovered since, but it’s still lovely and long enough to twist around the metal shelving. It does have the appearance and texture of a real plant, so I guess that’s what you pay for, if you’re a serial plant-killer. The creamy white ranunculus was just cut down so that it fitted into an empty caper jar, which I painted with the woodwork satin. I tend to keep glass jars, knowing that at some point in the future, they can be upcycled. Although these days, they get the spraypaint treatment – much more immediate results. 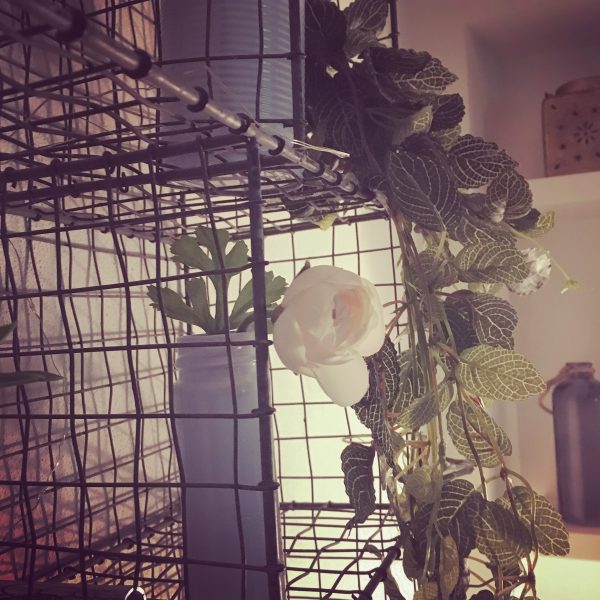 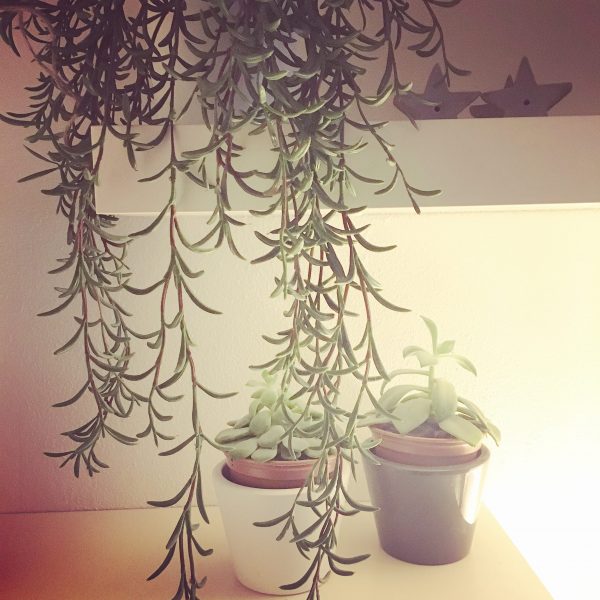 Our nearest B&Q style store, which we inevitably frequent a lot, stocks a good range of faux foliage and so a few blooms and branches always find their way into the trolley. An inexpensive and effective way of making a half renovated house look a lot more cheery. 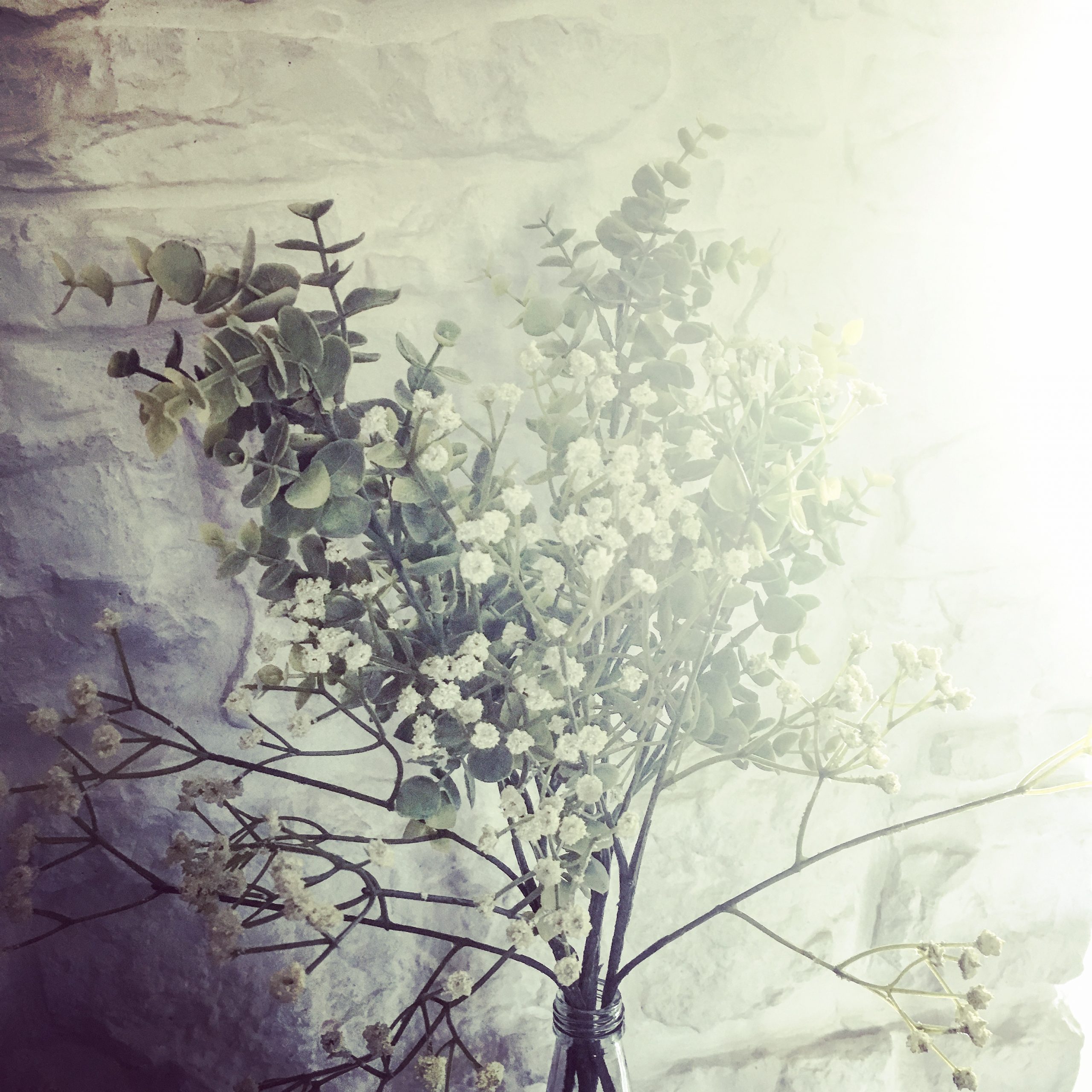 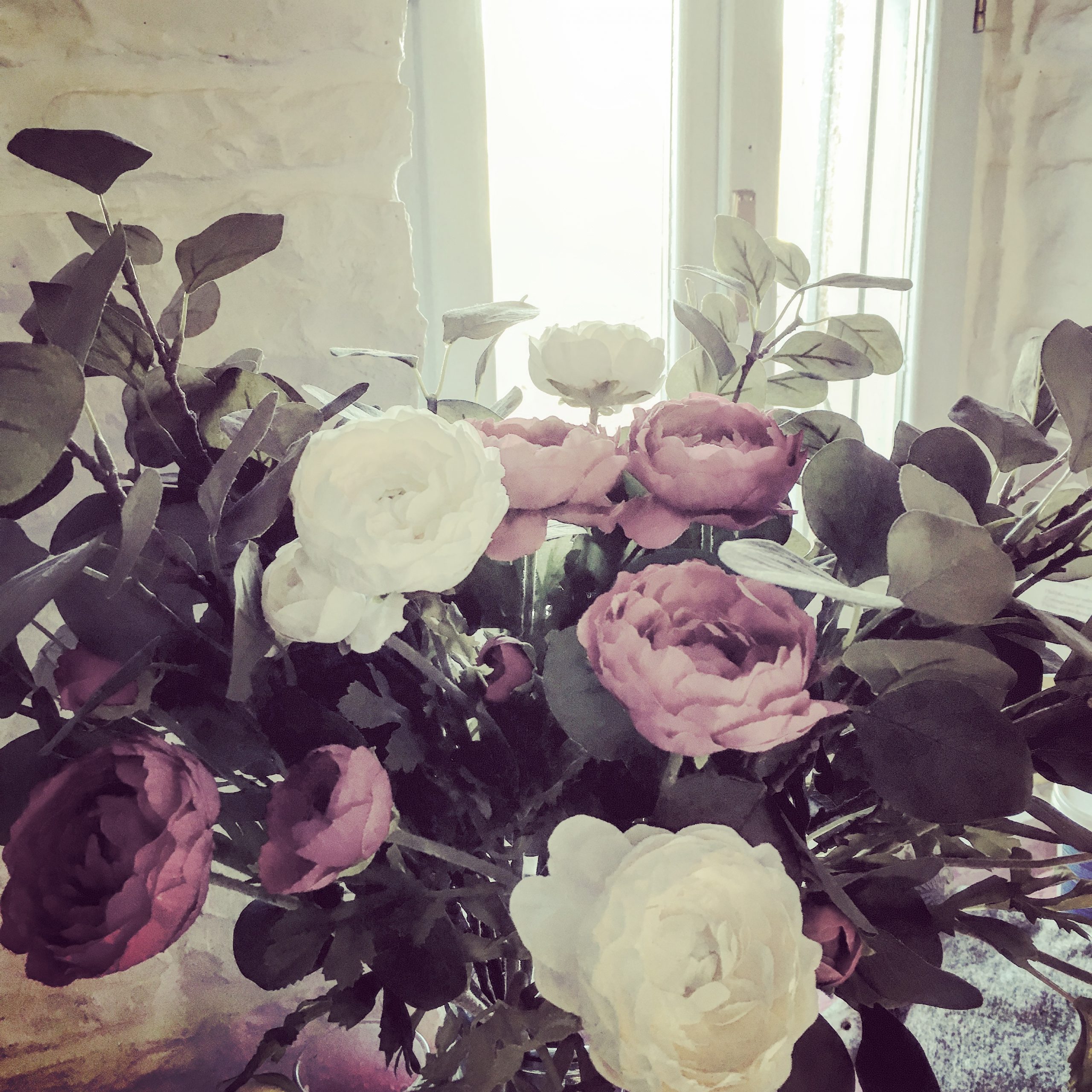 These little potted beauties from IKEA are greta value – they’re the Fejka range and are incredibly reasonably priced at £4 for a three pack. I dread to think how many of these packs I’ve bought… 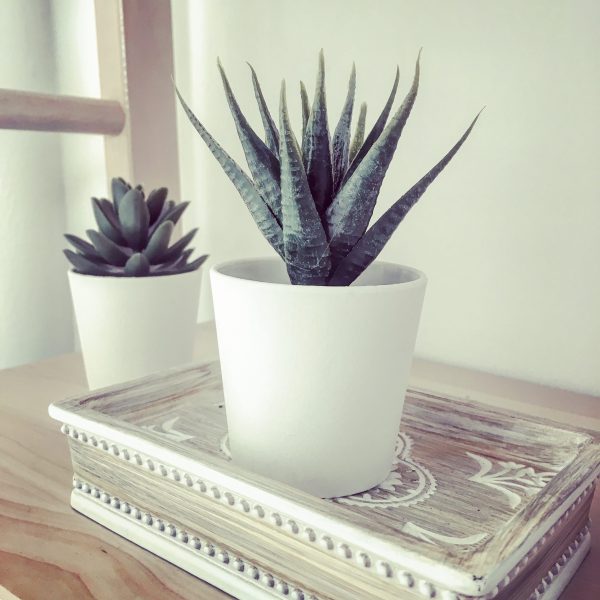 More Fejka IKEA plants – this time, hanging plants in baskets. I’ve found that these work best when a hanging basket/pot is large enough to accommodate two, at least three, of these faux plants so that there’s more density. 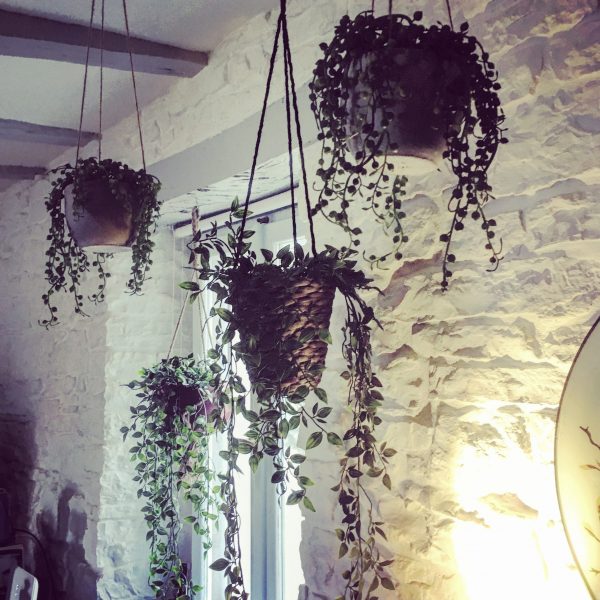 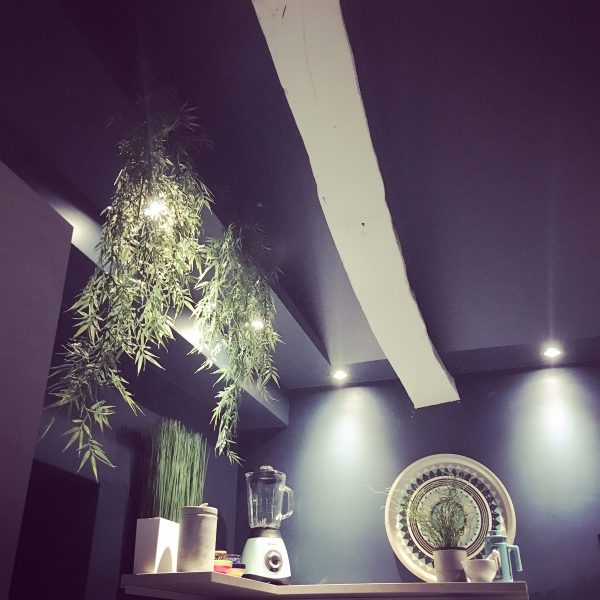 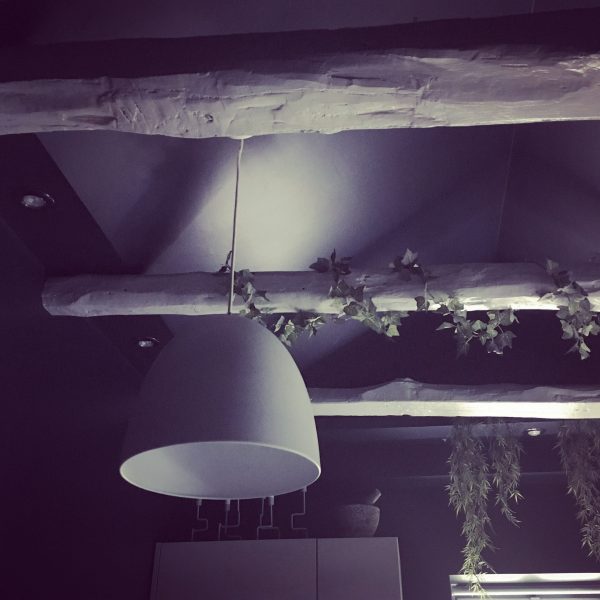 Our renovated beams are quite beautiful, even though we say so ourselves, but they needed just a little something else. Our garden is full of trailing ivy and this gave me the idea to wrap artificial vines around the beams, reflecting what is outside. The hanging foliage above the window are just two pots, sitting high on the beams – but because you can’t see the pots, the way they tumble, is very effective. Especially when they are lit up by the dimmers, in the evening. 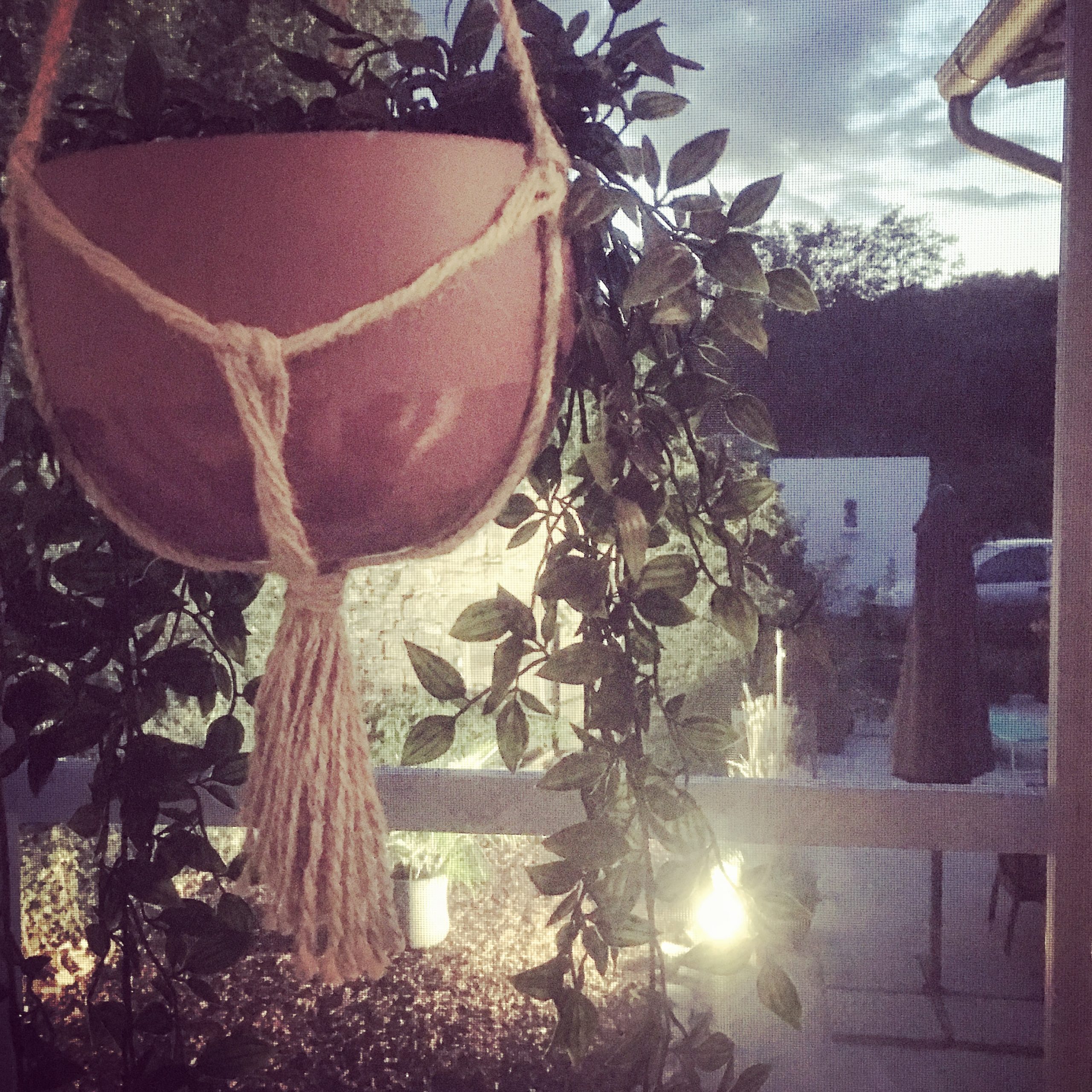 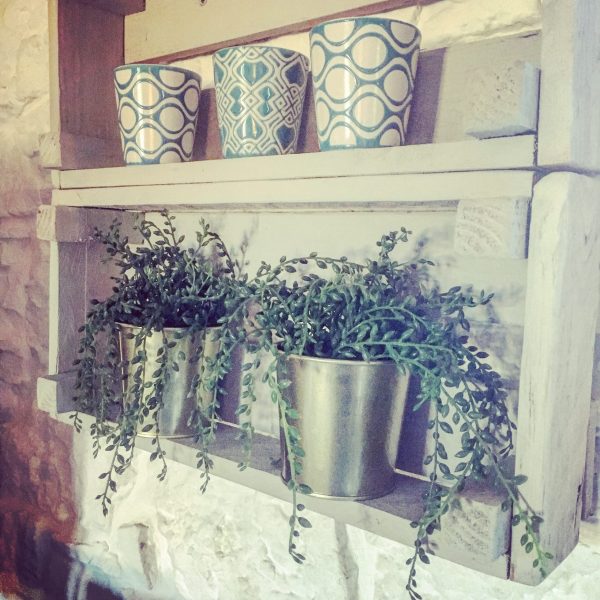 The basket below, was originally used to store towels, but these branches of faux eucalyptus and the cornflowers and reeds, just looked so much prettier and so it has been repurposed. Definitely adds more layers of interest in the room and it feels a whole lot more spring-like. 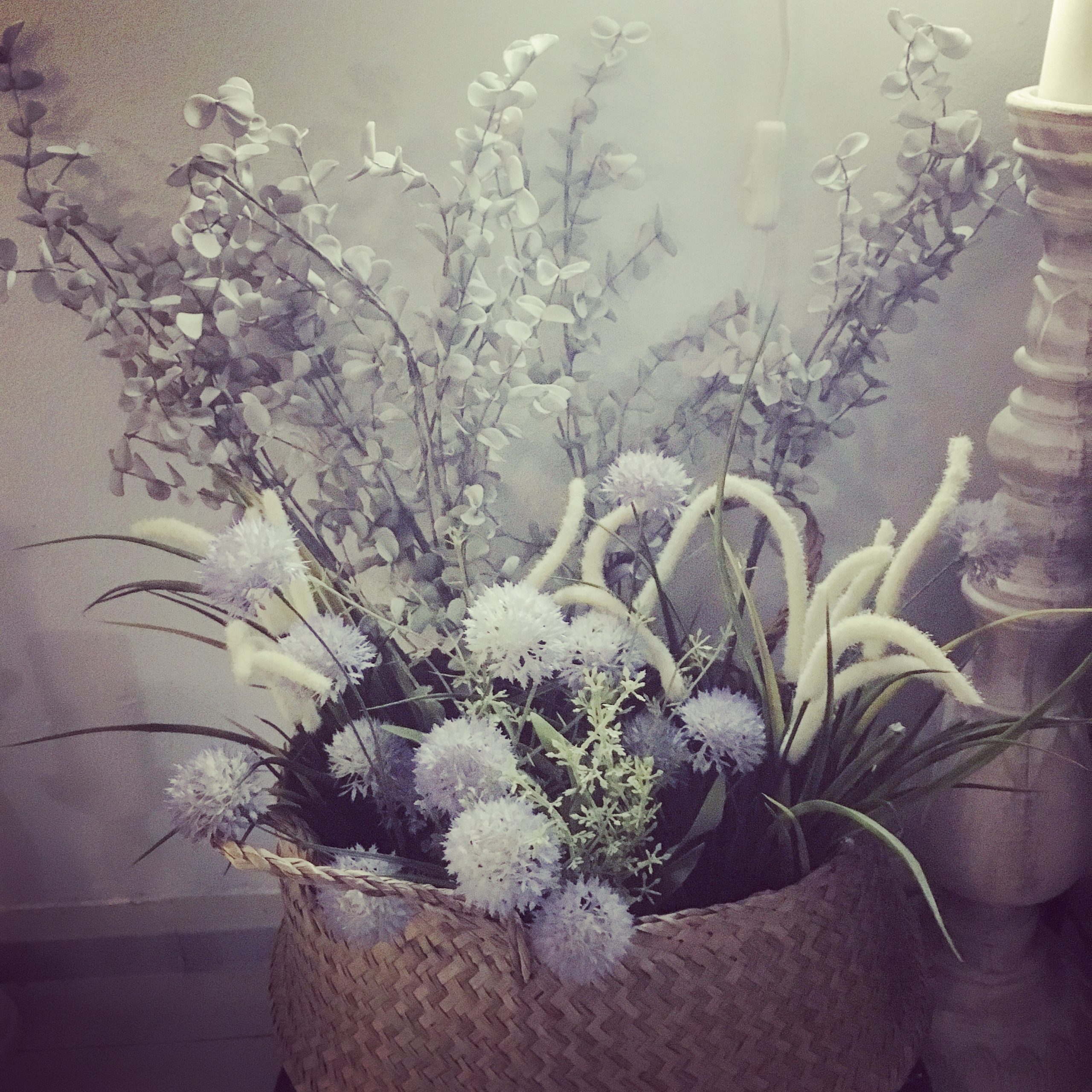 The upstairs bathroom has a very high ceiling, with orginal beams and again, we’ve introduced vines and hanging foliage, as well as this very lovely pale blue striped jug from IKEA. The cornflowers make anther appearance, too, sitting on top of the mirrored cabinet. 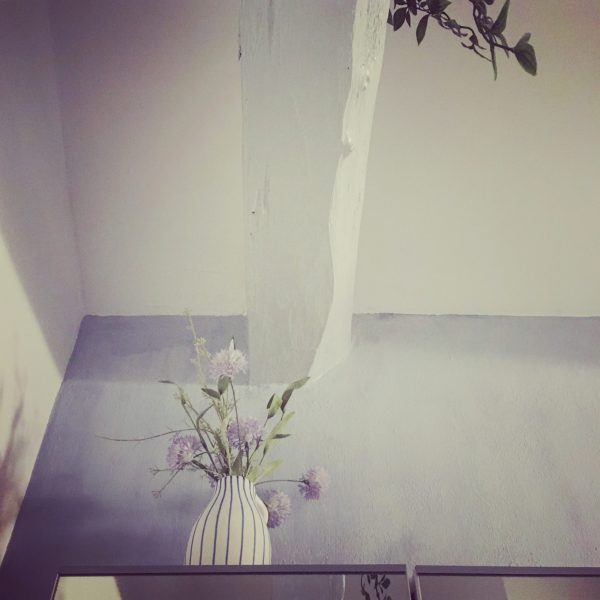 And finally, these vines… All laid out and ready to be used. But where they have been wrapped is for another blog 🙂 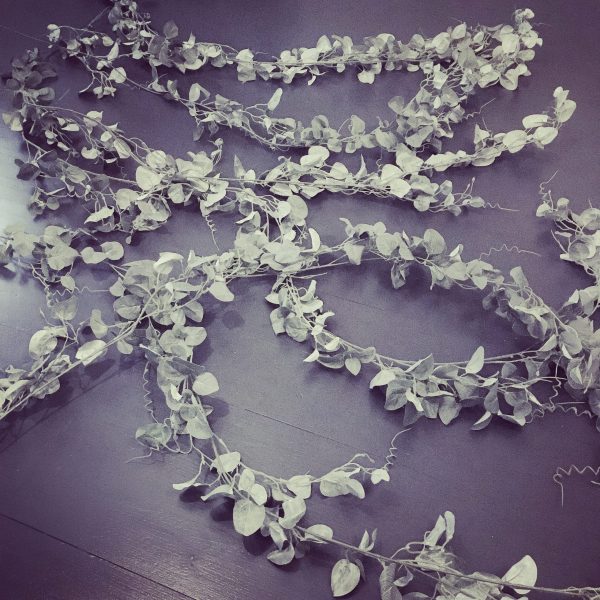 So there you go. A very inexpensive way to accessorise rooms, add depth and detail and bring the outside in. Safe in the knowledge, that once they’re in place, apart from the odd dusting, you need never do anything with them again, and they will always look good.