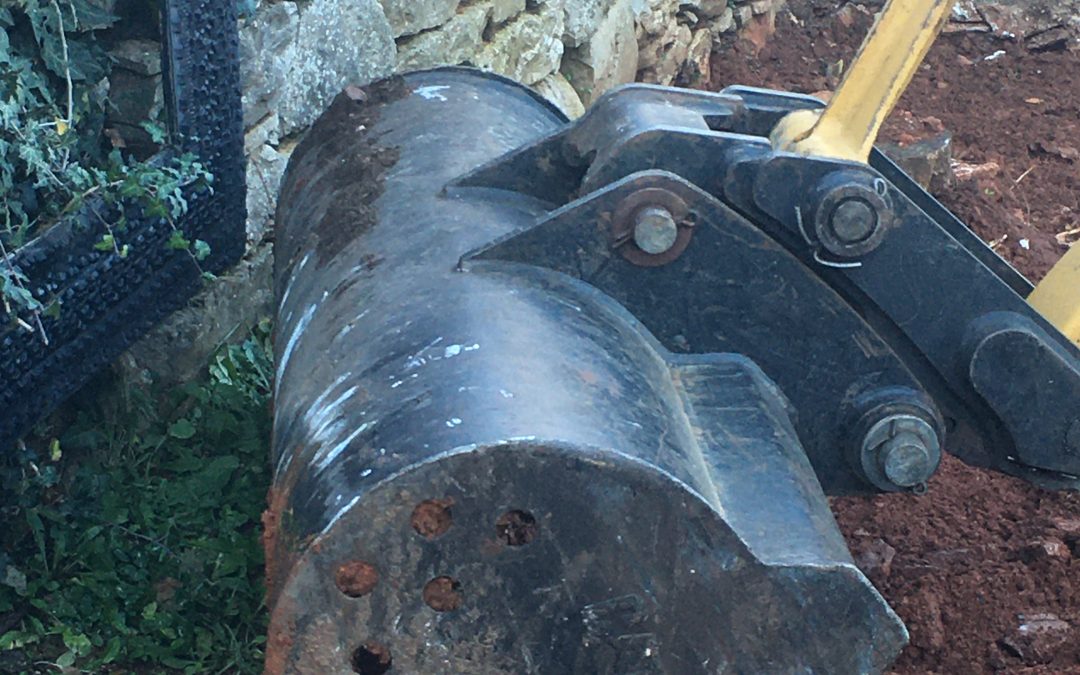 We’ve never had a garden big enough to accommodate our cars. In every house we’ve lived in, parking has always been outside, on the street. Apart from having to usually fight for parking space outside our house in West Didsbury, we’ve never really considered parking. Until now.

When we moved into the house, we had a big elderflower tree and a grassed area. The shovels and spades etc were being used to mark out what we thought might be a pool – that was knocked on the head pretty quickly! Cars used to be parked along the side of the house, but the grassed area there was starting to become worn, so we decided to use the grassed area below. The tree wasn’t very healthy so it was removed and we then had somewhere better to park the cars. 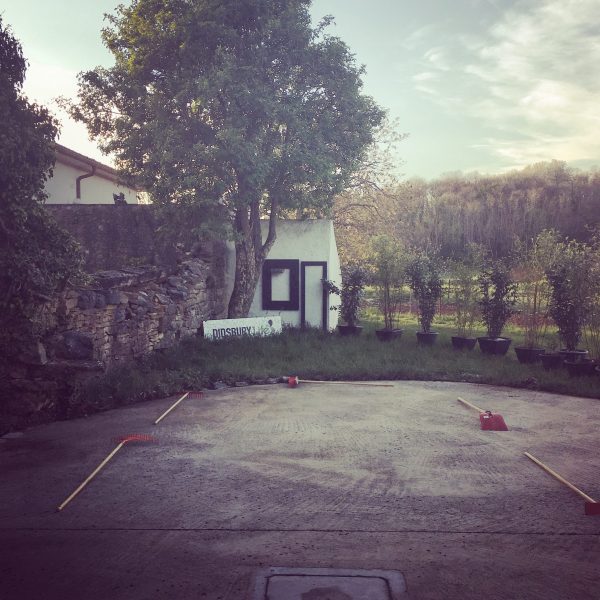 However, over the three and half years we have been here, this area has become more and more messy. Constant driving across it meant that the grass all but disappeared – although hardy weeds survived. With much building work going on in the house, lorries would often park up here, to drop off sand or stone or wood, and so the soil would be constantly getting churned up. And the soil we have here is thick, rich red soil, which, when it’s rained, is like clay. Looks lovely in the fields, not so much when dragged through the house on the soles of your shoes. So, a decision was recently made. The area was going to be sorted. With the house up for sale, it was another project on the list of jobs we wanted to do to ensure that our home was looking her very best.

Like all jobs we attempt ourselves, we grossly underestimated both how long it would take and how difficult it would be. But, you live and learn. 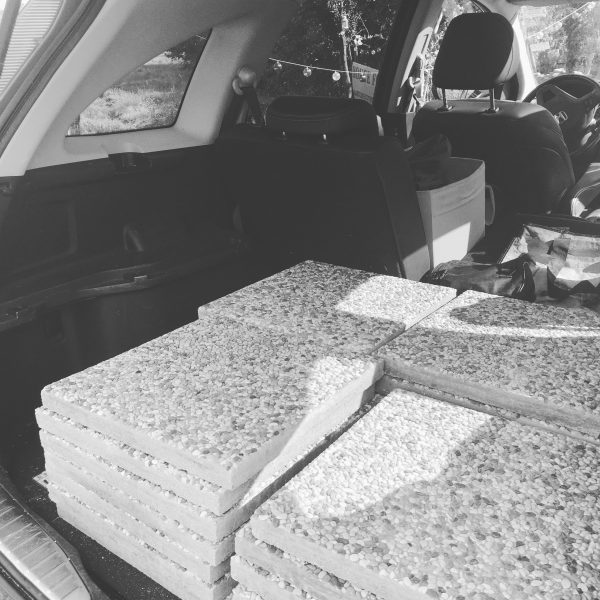 The first attempt involved the purchasing of a lot of flagstones – these were pretty inexpensive and we figured with a bit of leveling of the soil and plastic sheeting, we’d be good to go. 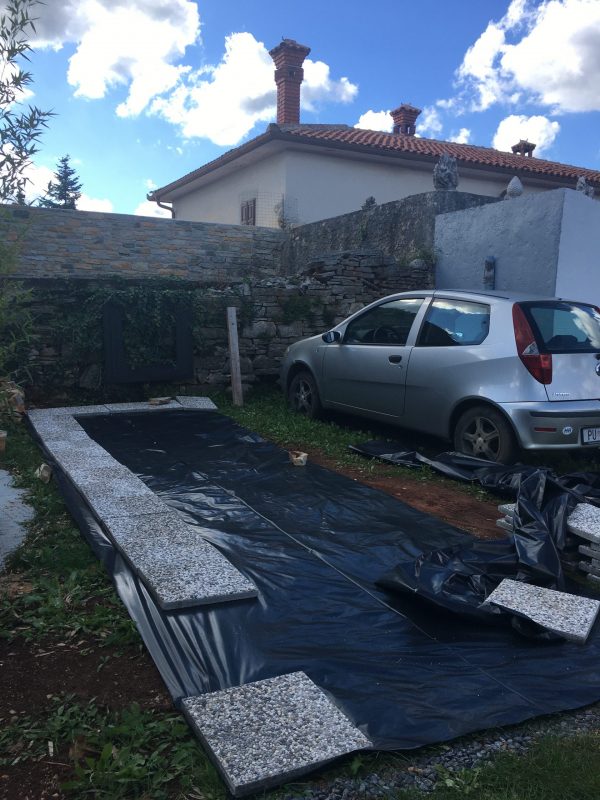 Of course, first rookie error – we didn’t think it through, because we wanted a hard surface down quickly, before the winter rain arrived – was that as soon the cars were driven onto the flags, some of then cracked immediately. We hadn’t really dug down and embedded them, so we had to have a rethink. Concrete was an option which we considered, but however we did it, it was agreed that the digging had to commence so that we could make the area as level as possible. And again, we didn’t think this through. With a wheelbarrow and a pick axe, we thought it would take a couple of hours or so – but how wrong we were… 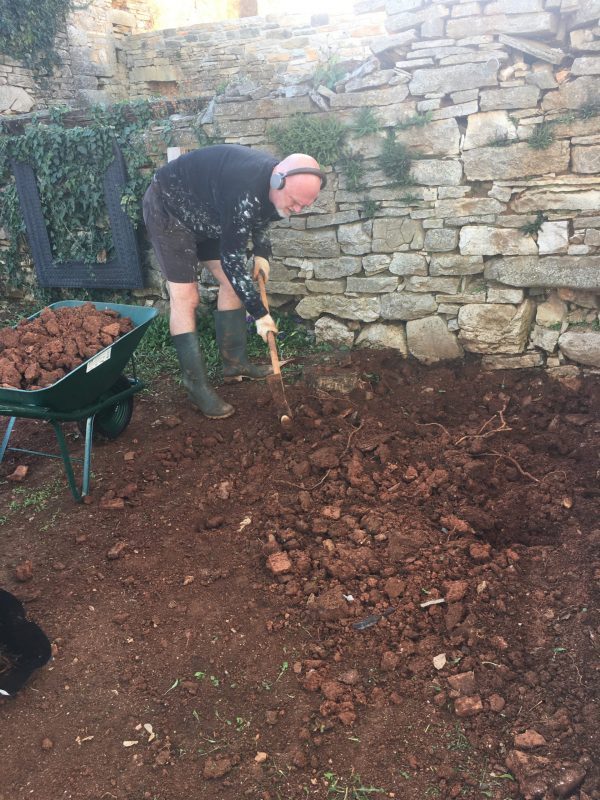 We soon discovered where the outbuilding, which had been demolished before we bought the house, had gone. Buried. Under the soil. From slates to huge corner stones, the outbuilding was still there… 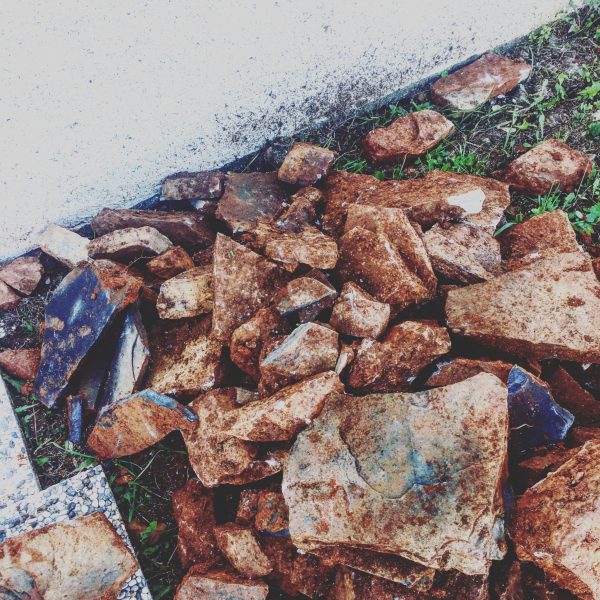 We quickly figured that we’d still be digging this time next year and that we needed a bit of advice. Working with our builder it was decided that a digger was needed and that the best solution, once the area was flattened, would be to backfill with a mix of stone and sand, compressed with a proper machine and then a top layer of Istrian stone chippings put down. This sounded like the perfect solution and all was arranged. 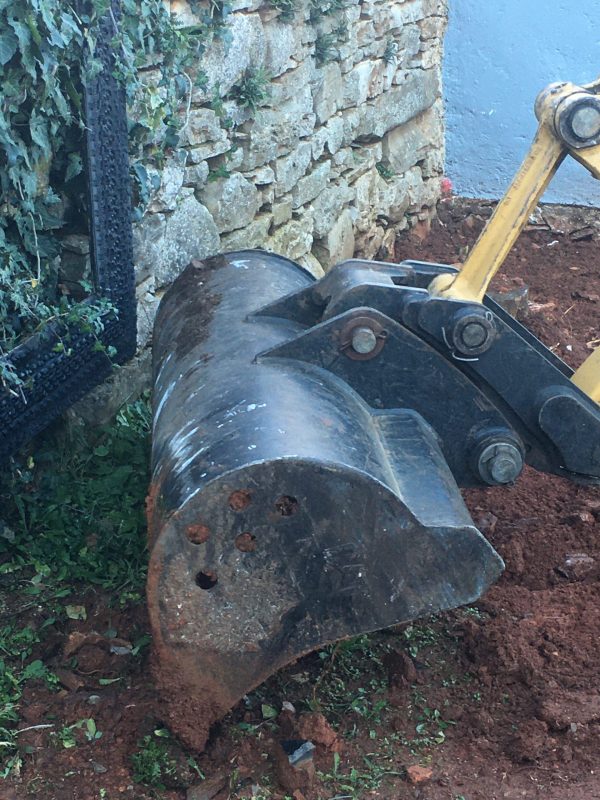 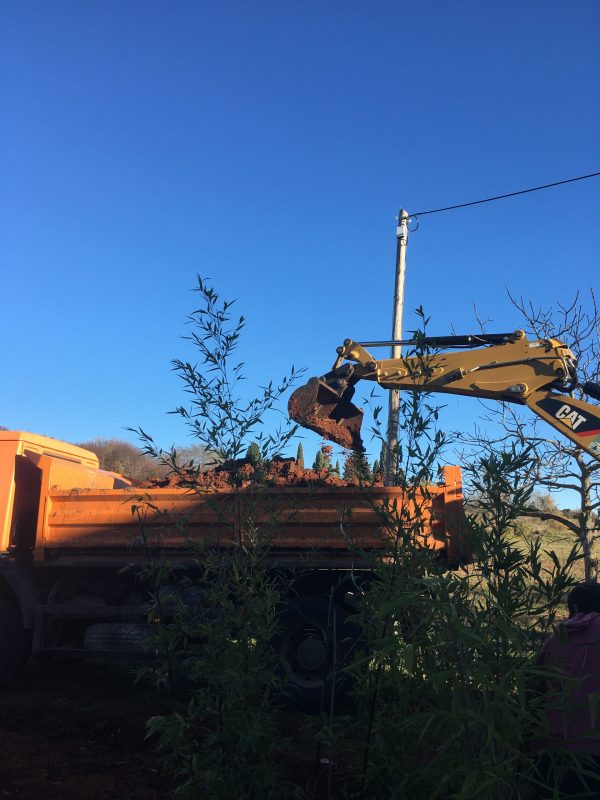 A full lorry load of rubble and soil was excavated and taken away, although we did retain some of the more beautiful stones as we had an idea for a wall… 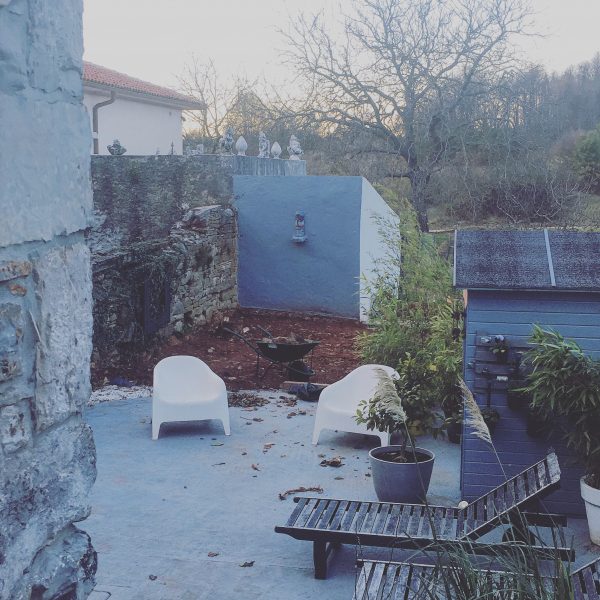 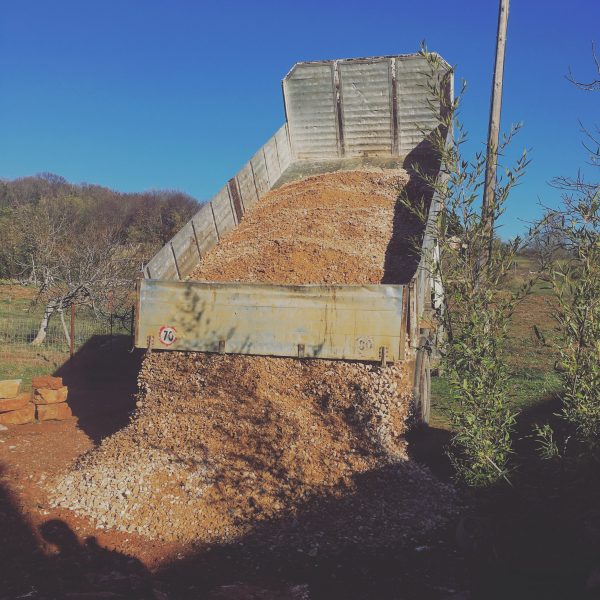 Very early, on a very cold Saturday morning in later November, the first delivery arrived and not long after, with some good rake action, the area was covered, and the cars were driven back and forth to begin the process of compressing the material. 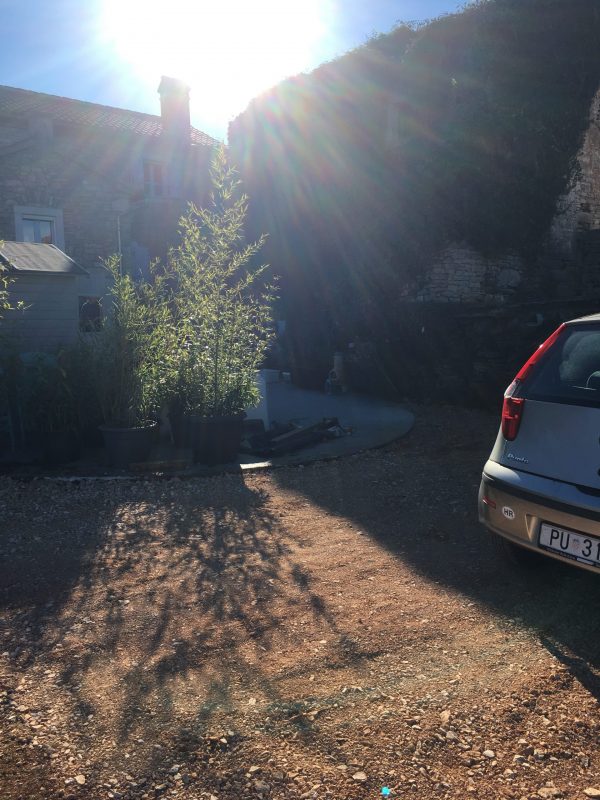 One of the things which has delighted us the most about doing this work, is that the excavation has now properly revealed the curved edges of the patio. Once this is repainted in the spring, it will definitely come into its own. 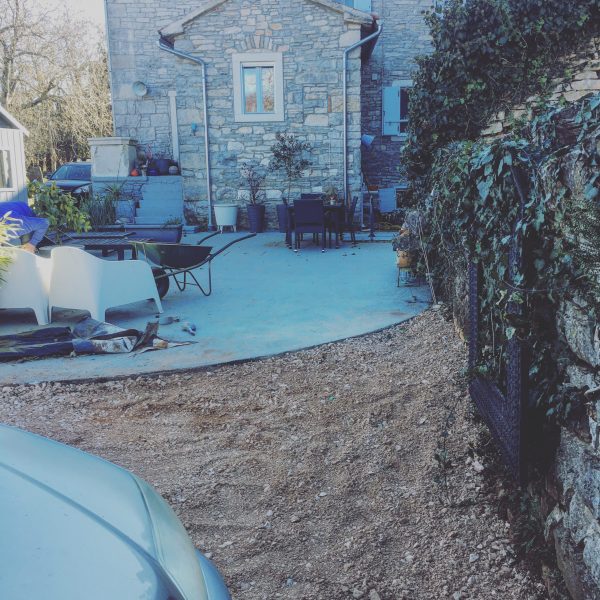 To finish this part of the job off properly, a machine was used to totally flatten the stones and when done, we had the hard area we’ve been wanting. And no more red soil. 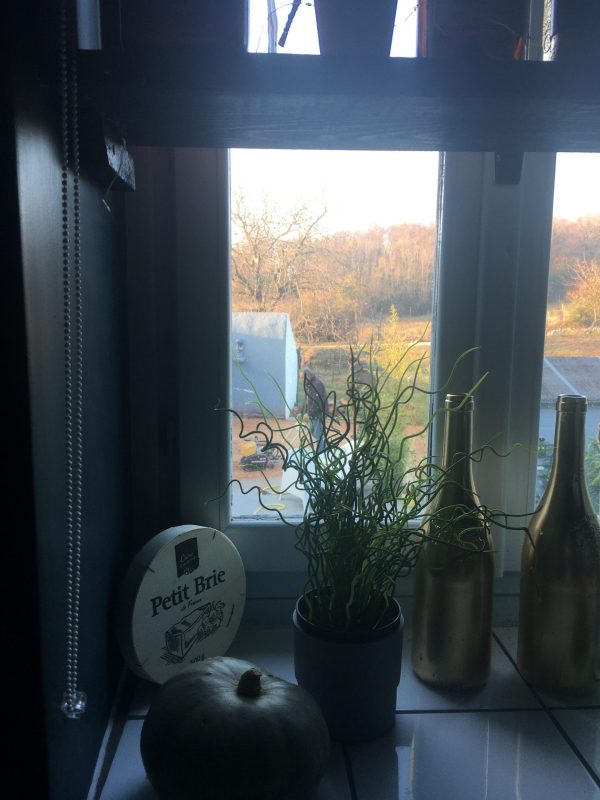 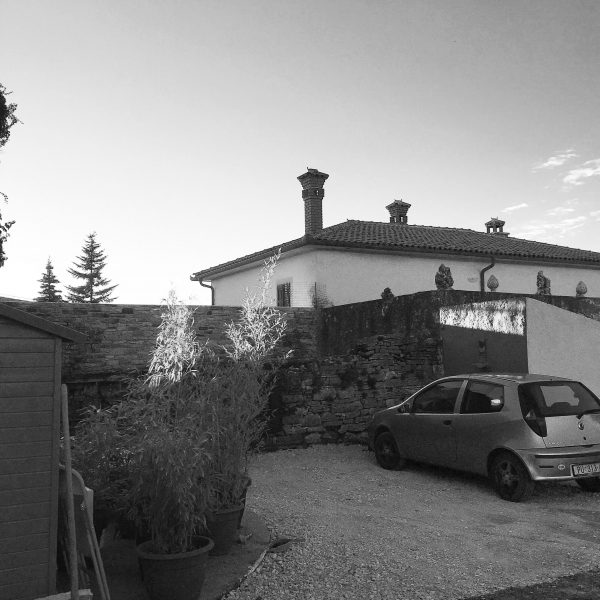 The final piece of the jigsaw was the delivery of the top stones – beautiful milky white Istrian stone chippings. 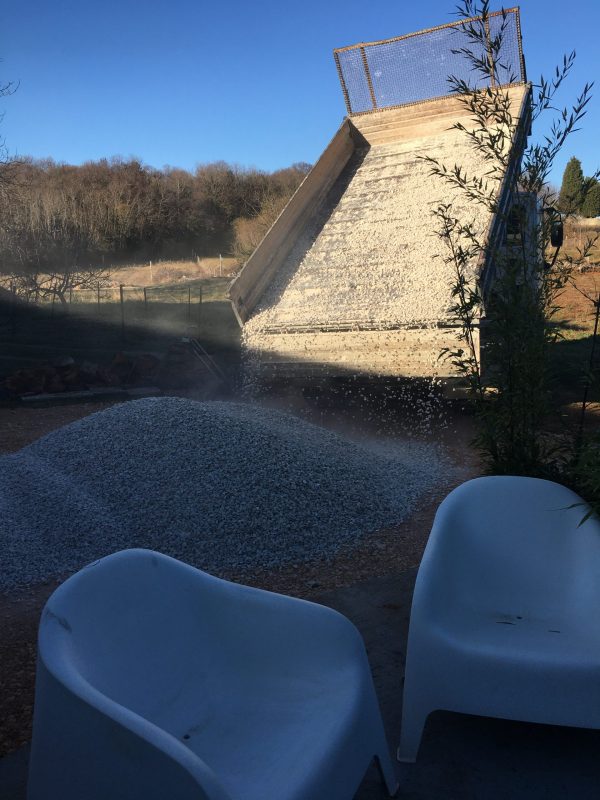 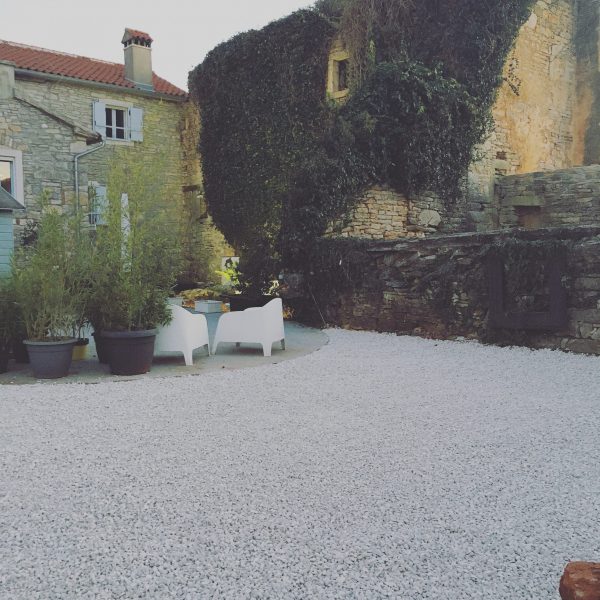 And, within a couple of hours, it was done. What a transformation, for relatively little cost and done much more quickly than us attempting it with a pick axe and a shovel. The stones we’d saved were used to create a little wall at the front of our property, to finish things off. Heather plants and pink oleanders – which we hope will burst into colour, in the spring – create something more visual and definitely enhance the entrance to the garden now. 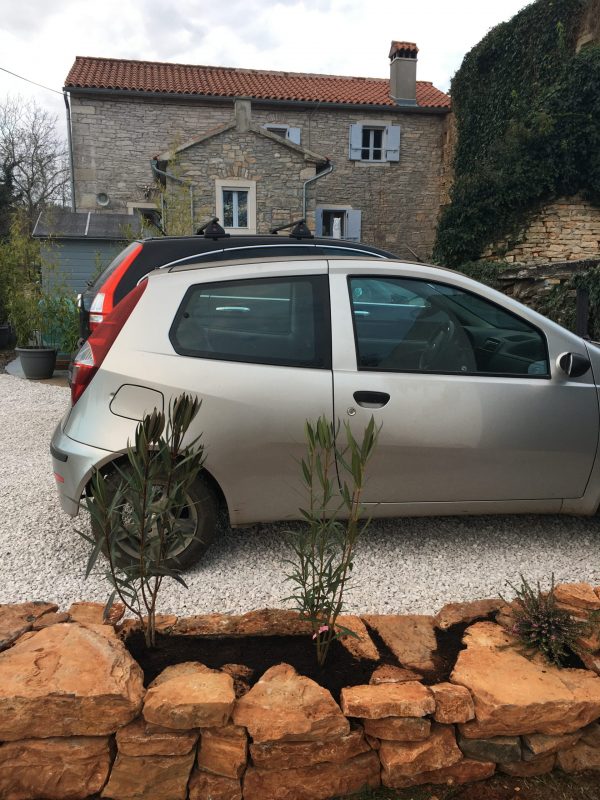 We are delighted with the finished result. No more trailing mud into the house and with a specific area for the cars, the garden just seems so much more complete. Depending on how long we are here for, the plan will be to maybe construct a pergola over this area, which will be planted up with climbers. But, that may be something for the new owners… 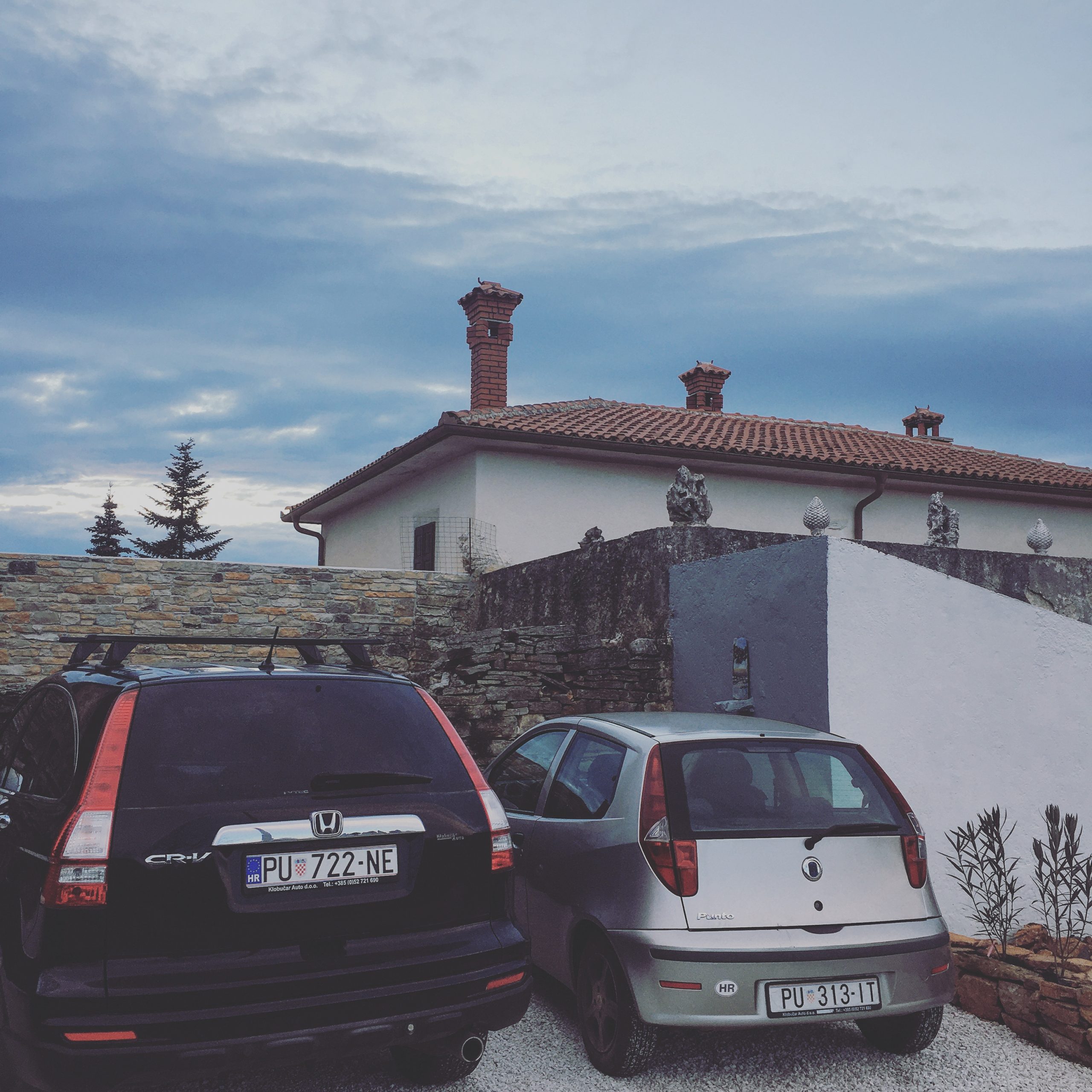 Our house for sale can be viewed here.