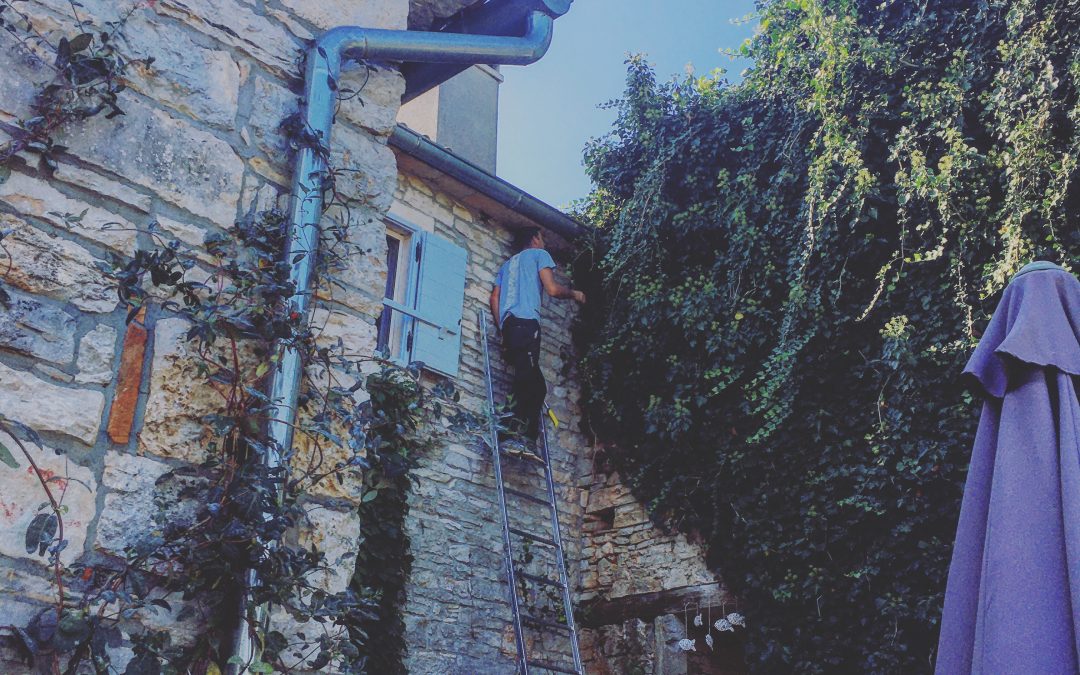 If you’re a follower of what we’re up to, you’ll know that our renovated stone house in Istria, is currently for sale. You might also know that we have a very unusual feature in our front garden. We are right next to an abandoned house and one of its walls forms one of our garden walls. Now, this might sound alarming – and I have to say if we were living back in the UK, the thought of being adjoined to an abandoned house, would fill me with fear. But abandoned houses in Istria are part and parcel of the landscape. These buildings were once family homes – dwellings – and all have fallen into disrepair because families either escaped or were forcibly removed, depending upon the regime they were living under at the time. Many are now being renovated and restored, as descendants lay claim to them or as sympathetic buyers bring life back to them. A lot, though, have multiple owners, often scattered around the world, and Croatian property laws dictate that every single living owner has to consent to the sale, so some are destined to probably never be purchased/renovated. The one next to us, is one such property. It has seventeen owners – we know this for definite as all had to be contacted when we were establishing our boundaries – and some of these owners live in America, some in Australia, a couple in the village and most places in between! So, one thing’s for sure – it’s not going to be sold any time soon.

So, what we do have, is a very, very unique boundary wall, which is covered in ivy and vines. It is an absolute haven for bees and butterflies and birds, and so we have “adopted” the Green Wall. We take responsibility for its upkeep and ensuring that it is kept cut back. The ivy is very heavy and although the strong, thick vines keep it in place, we don’t want to risk it being pulled down with the weight. There are windows (without glass) in this wall, and we always ensure that these are uncovered, because when the sunlight streams through them into our garden, it is beautiful, and we don’t want these to be obscured any more.

But, you do need a head for heights to do the big, once a year, chop back. Or a friend with a head for heights. And we have one of these. And he came to visit with his extendable ladder, a few weeks ago. All of the vines which were beginning to work their way into our roof tiles, were removed and the cracked roof tiles we discovered were replaced, mortared and sealed. This year, we actually had the vines cut well away from our house – there’s now a space of over a metre where there are no vines at all, so we’re hopefully all OK until next summer. The guttering at this side of the house was all cleaned out, too.

Next job was to completely cut back the bulk of the outgrowing ivy – we’re always a bit reluctant to do this, because the bees and butterflies do love it, but we can’t just let it grow wild. Tied onto the very long ladder, our friend chopped it all back – and to get to the highest branches, he unstrapped himself and walked along the top ledge, chopping away as he walked. Health & safety is shall we say, a little less stringent than in the UK… 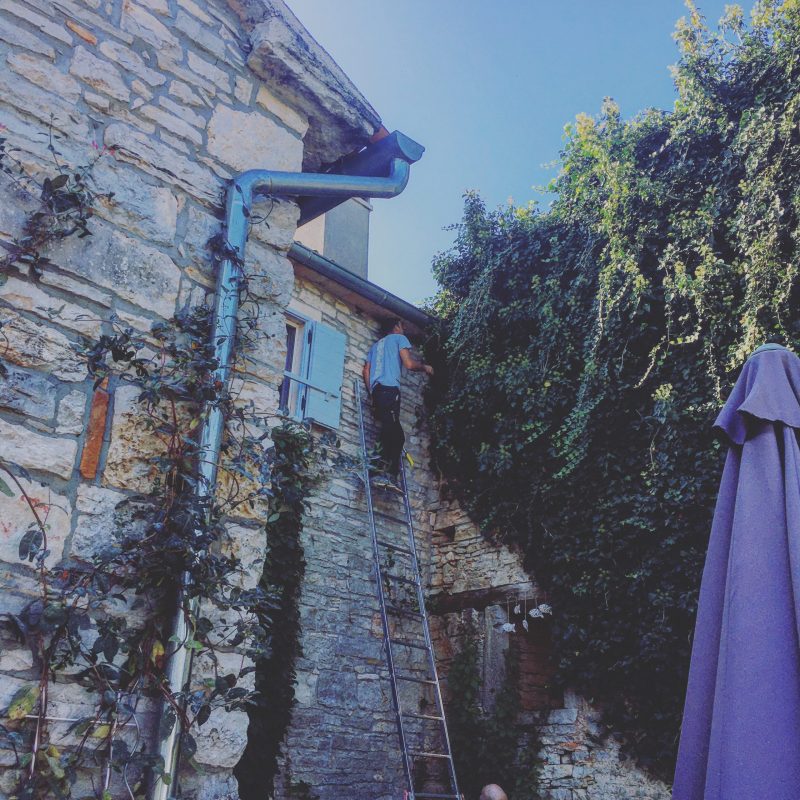 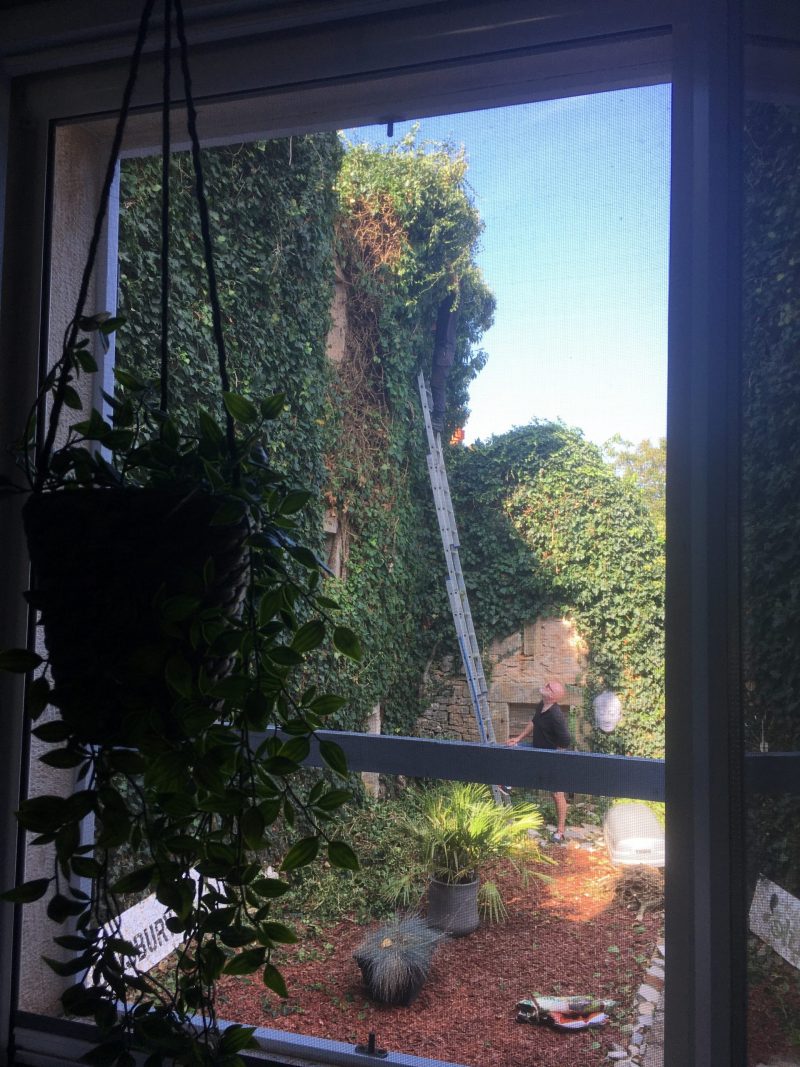 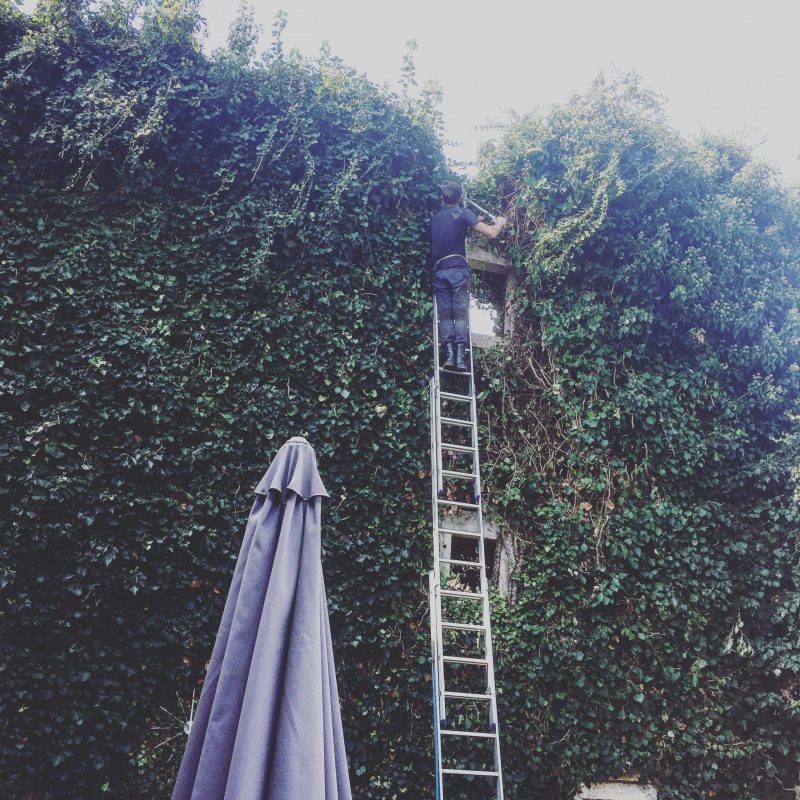 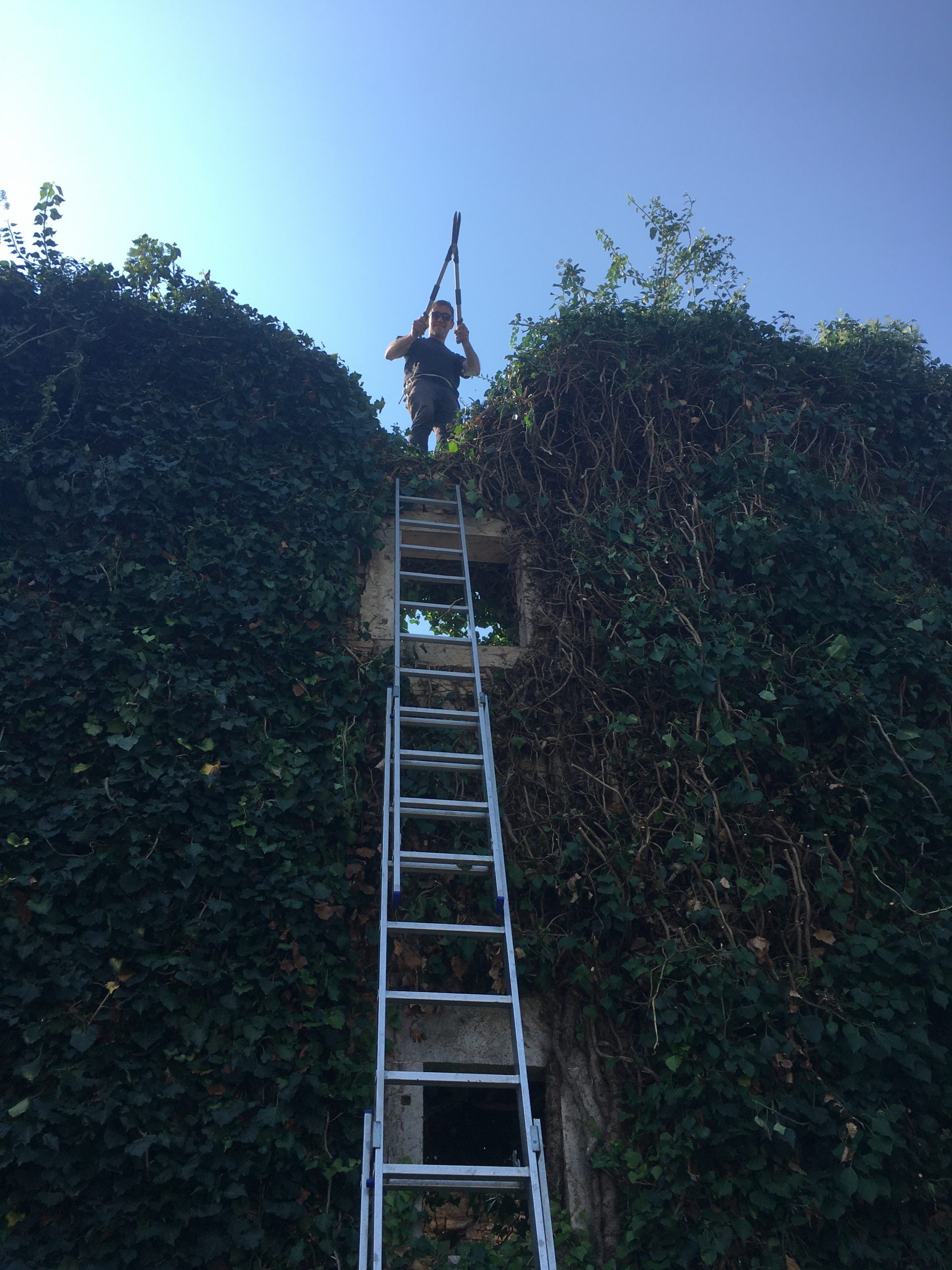 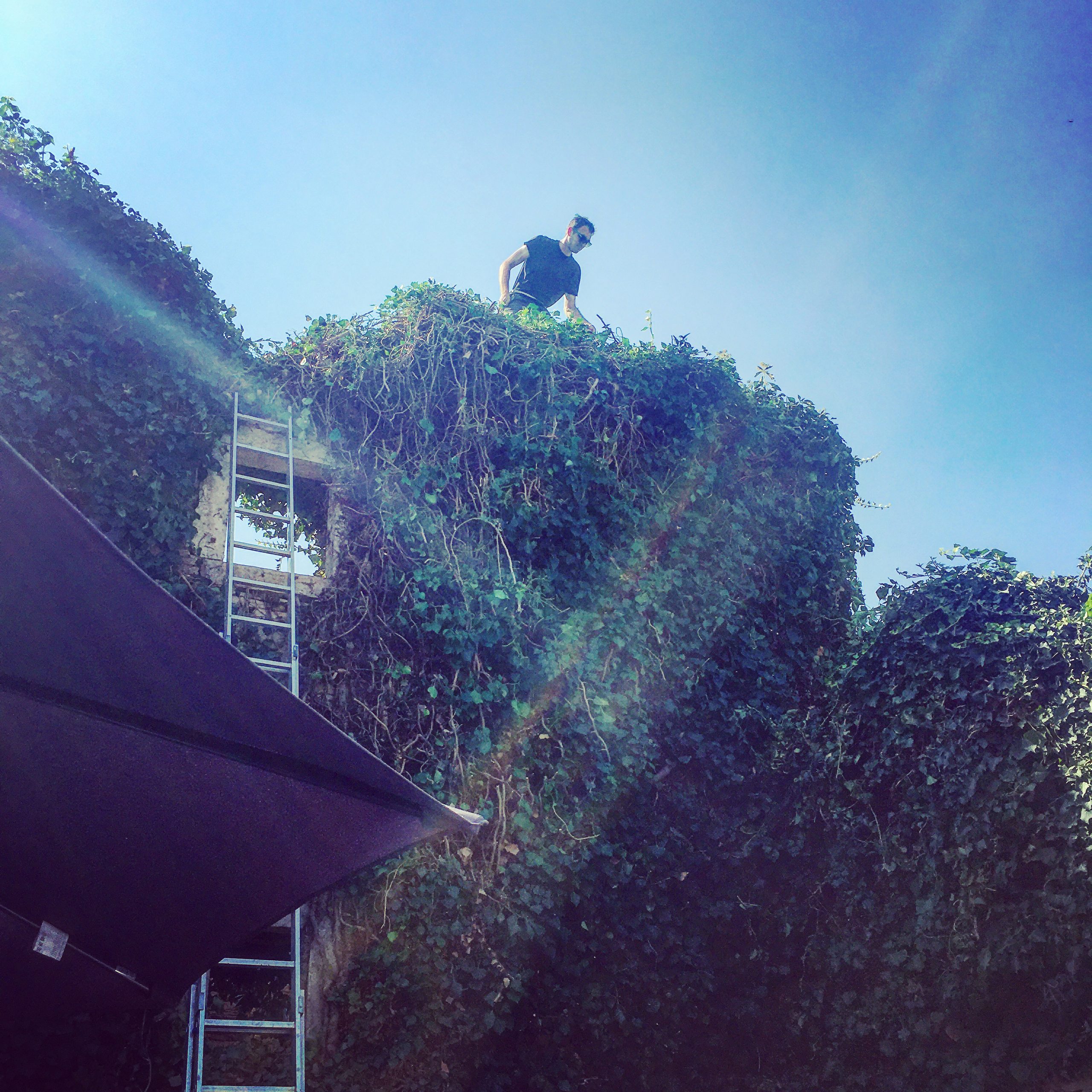 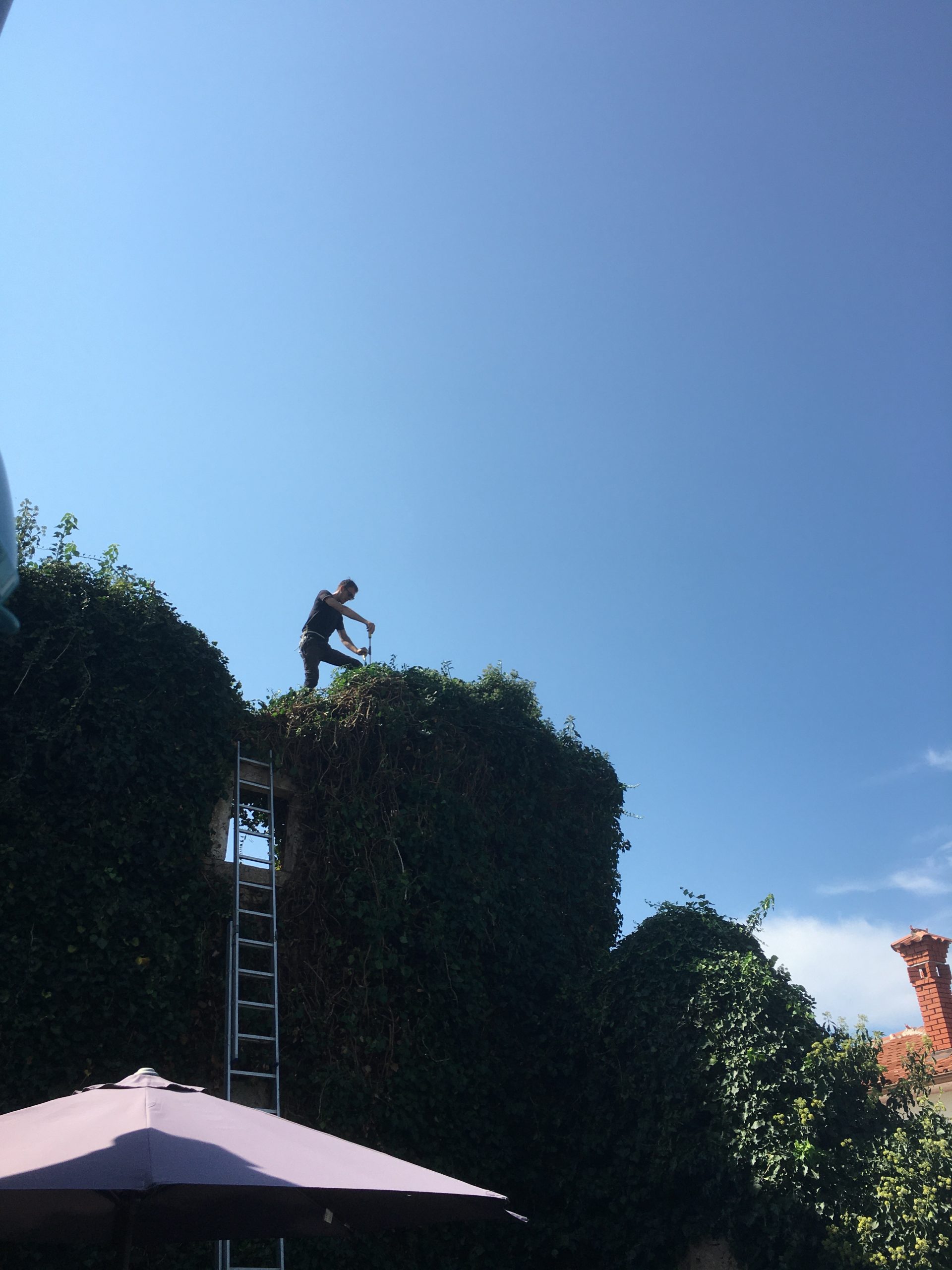 We left the smaller wall to the right and just trimmed the ivy here, rather than cut it all back at this stage, as we still wanted the berries for the birds, and the late flowers for the bees and butterflies. It’s late October now, but still warm enough during the day for them to all be buzzing around.

So, that’s one of our big autumn jobs ticked off. In the past, when we had our little garden in West Didsbury, winter prep would largely consist of putting pots away and brushing leaves. It’s all a little bit more involved now, but once done, we can rest easy over the winter, knowing there’ll be no water ingress caused by leaves in the gutters or tiles being lifted because of ingrowing vines. It’s always a good day, too, when we know that the weight of the vines has been removed and that we’ll better growth next spring. Just need to get through the next few months of darker days, less vibrant foliage and no stretching out in the garden in warm sunshine… 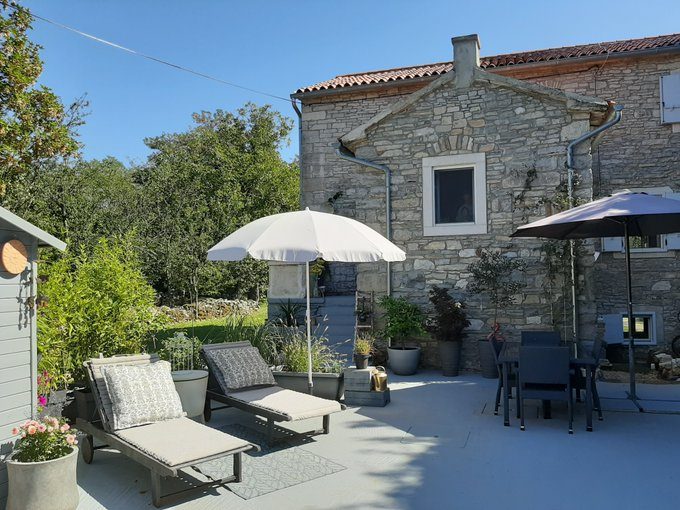