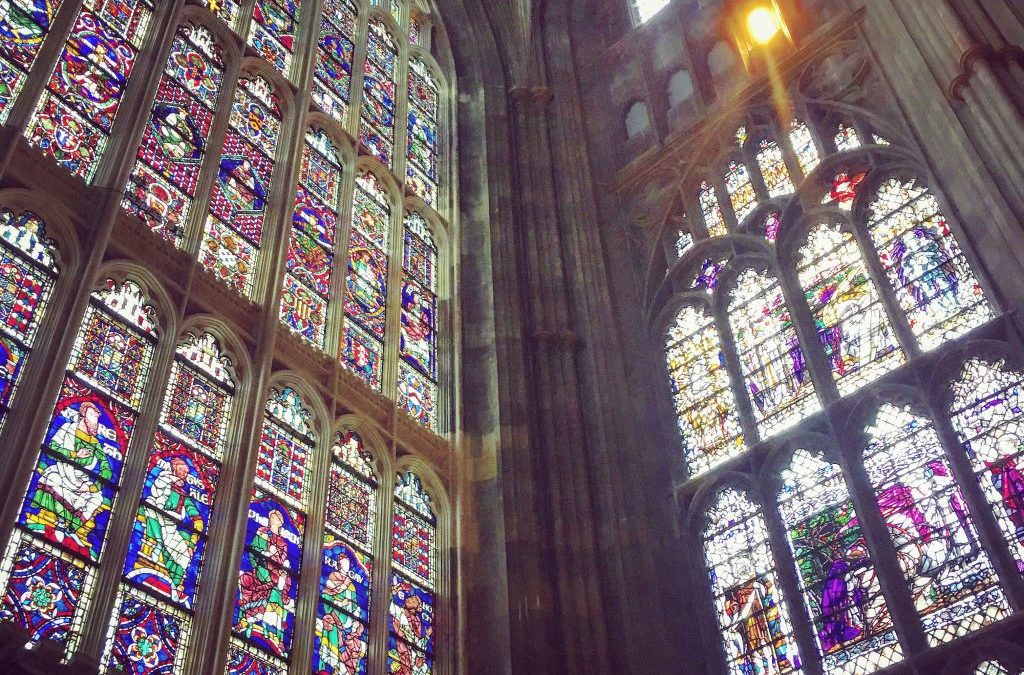 It wasn’t intentional, but over our Christmas roadtrip, we seemed to visit quite a few cathedrals. Not for spiritual reasons, you understand. We love a cathedral for its architecture and gloriously over the top rich interiors. First stop was one we know very well – Durham Cathedral. Having grown up near here, it’s a place we’ve visted often – and definitely think winter time is by far the best time to visit. Lighting is much more evocative, with lots of candlelight and shadows. The Norman pillars are utterly majestic, as are the stained glass windows. The construction of the cathedral started in 1093 – 1093!

Over 900 hundred years ago!

Today, it is regarded as one of the finest examples of Norman architecture in Europe, and in 198, along with Durham Castle, it was designated a UNESCO World Heritage Site. Durham Cathedral holds the relics of Saint Cuthbert, transported to Durham by Lindisfarne monks in the ninth century, the head of Saint Oswald of Northumbria, and the remains of the Venerable Bede – and if you went to school in the North East, you definitely who this lot are and how important, both historically and, in religious terms, they are. In addition, its library contains one of the most complete sets of early printed books in England, the pre-Dissolution monastic accounts, and three copies of Magna Carta. So, it’s a bit of a wow. It’s been used as a film location on many occasions, most recognisably probably in the first two Harry Potter films. Scenes from Elizabeth 1, starring Cate Blanchett were filmed here, as well as interior views which were featured in the 2019 Marvel superhero film Avengers: Endgame, as the indoor location of Asgard. (We had no idea about this, until the day after our visit, watching the film with our superhero-mad nephew, we spotted the Norman pillars).

Replica of the infamous Sanctuary Knocker, Durham Cathedral. Under medieval English common law, this knocker (and others like it) supposedly afforded the right of asylum to anybody who touched it.

The beautifully weathered pillars at the entrance to the cathedral.

We first visited Canterbury over twenty years ago, but it’s become a bit of a go-to stopover when we travel to and from England on our regular roadtrips back from Istria. It’s so convenient for Dover and such a lovely place that we did it twice on this Christmas trip. And because we had two full days on the return trip, we decided to spend most of it investigating and exploring the Cathedral. When I did A’Level English Literature, we studied the Prologue to the Canterbury Tales – a nice do-able introduction to medieval English – and was fascinated by Canterbury and its Cathedral, so I was keen to get to know it.

Now, I thought that Durham Cathedral was impressive age-wise, but it’s just a baby cathedral, compared to Canterbury. Founded in 597, it was completely rebuilt between 1070 and 1077. Perhaps the most famous moment in its history was the murder of the archbishop, Thomas Becket, on Tuesday 29 December 1170, by knights of King Henry II. The king had frequent conflicts with the strong-willed Becket and is said to have exclaimed in frustration, “Will no one rid me of this turbulent priest?” Four knights took it literally and murdered Becket in his own cathedral. After his death, the cathedral became a place of pilgrimage.

An impressive entrance into the grounds of Canterbury Cathedral

Even with renovation work being carried out, this is one impressive interior…

Murder in the Cathedral : Thomas Becket

We spent a good few hours mooching around the Cathedral and its Cloisters and it was pretty magical. Not for the religious experience though – what blew us away was the architecture and historical significance. And, so across the channel and onto our next Cathedral…

We were entirely unprepared for this Cathedral, not even knowing that there was a Notre Dame here. We saw it first, late at night, after dinner, when it was bathed in a golden light – the Christmas lights were still very much up in Strasbourg, despite it being after the 6th January and the golden lights were for the festive season. To say it’s a jaw-dropping structure is an understatement…

We were due to leave Strasbourg early the next morning for Brescia, but felt we couldn’t pass up the opportunity of a visit when we were in the city, and so squeezed one on before we left.

The Cathedral, in miniature, in front of Strasbourg Cathedral.

We expected to pay an entrance fee to get into the Cathedral, but after a brief security check, we were in, no charge. A bonus.

The impressive main entrance to the Cathedral

The Story of the Nativity

The Cathedral towering over the oldest building in Strasbourg, La Maison Kammerzell, constructed in 1427

So ended our Christmas Tour of Cathedrals. Completely unintentional and not pre-planned, but wonderful. Three gorgeous cities, full of history. A perfect way to bring our roadtrip to a conclusion. 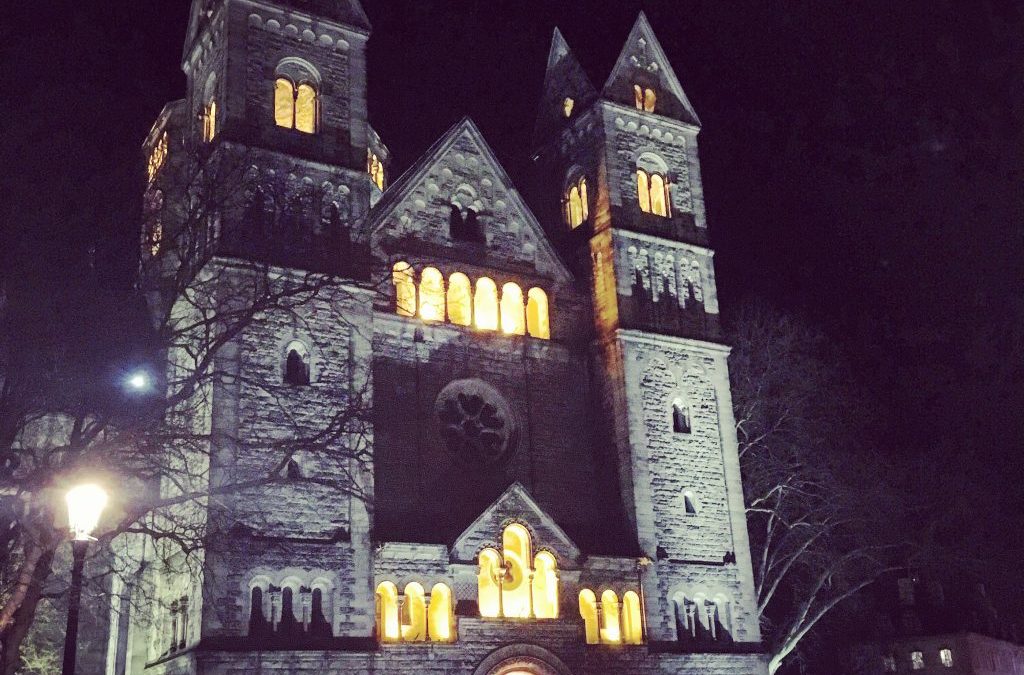 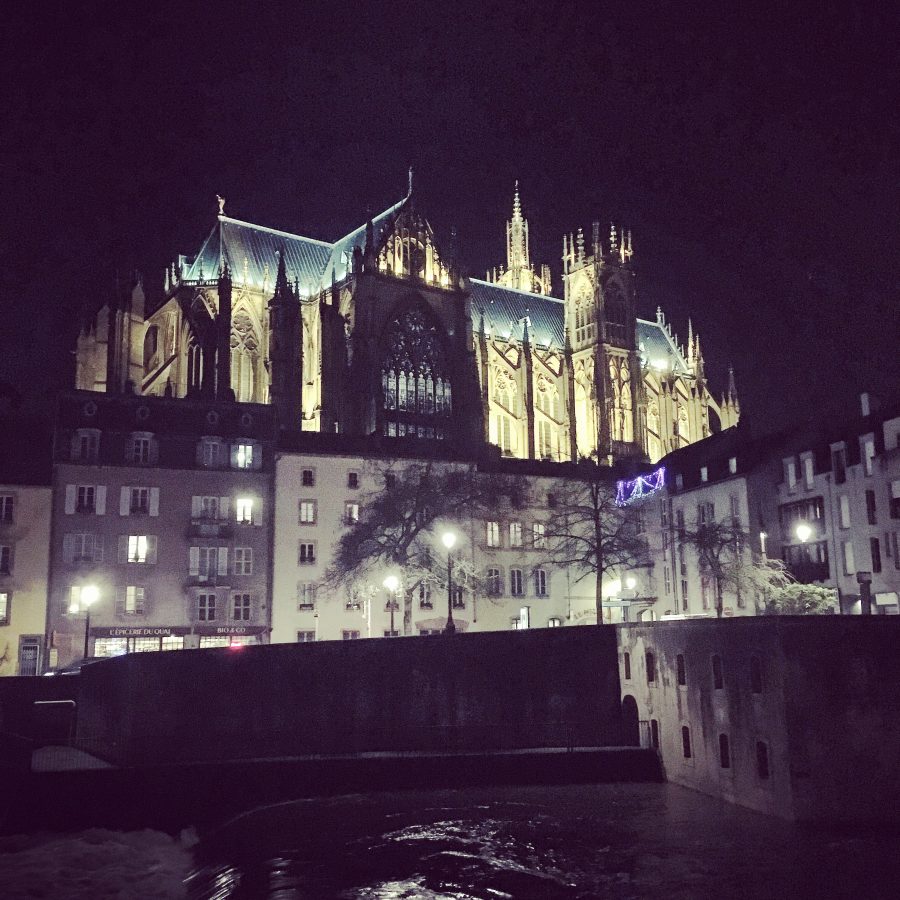 We first discovered the beautiful medieval city of Metz, two years ago, on our first road trip from Istria to England, for Christmas. Positioned where it is, in north eastern France, it was a good place to stop and break up the journey to Calais. We’ve stayed a few times since – and although there are undoubtedly many fabulous places to rest our heads, we now just opt for Hôtel de la Cathédrale, which, as stated on the website, is very definitely, a hotel full of charm and character, in the beautiful heart of Metz. Housed in a 17th C building, the hotel is utterly charming, full of French antiques and, certainly in the variety of rooms we’ve stayed, oozing with vintage vibes. I’ve never stayed here and not returned home with a few ideas… 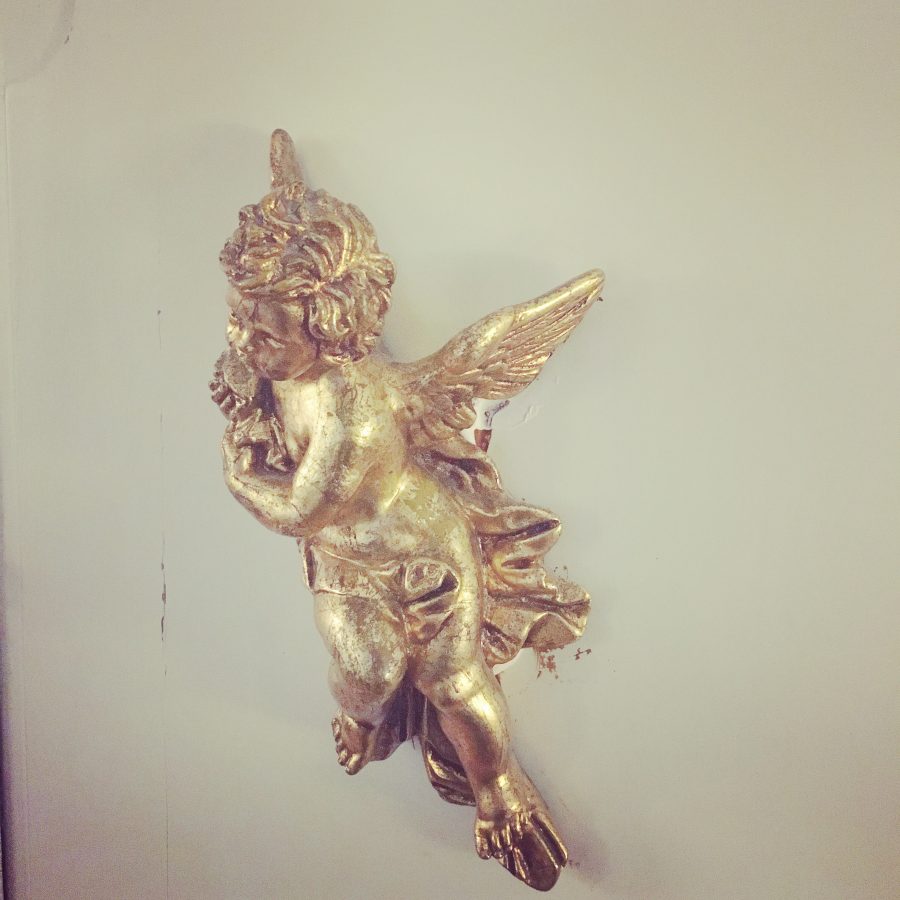 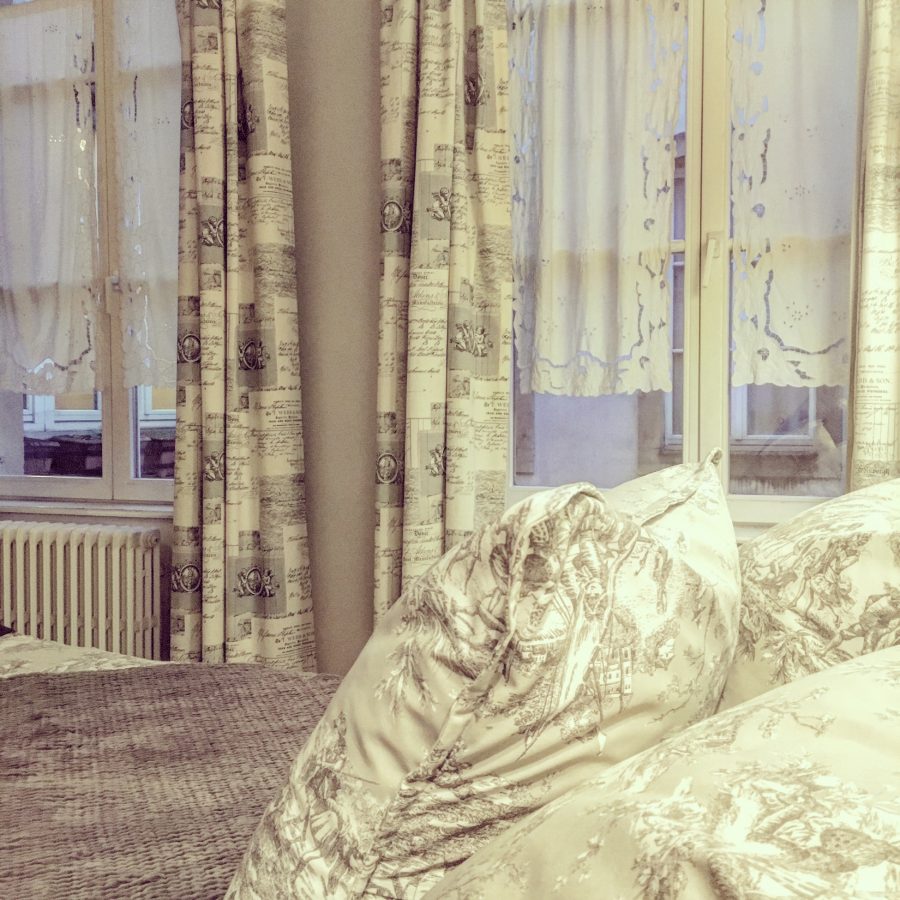 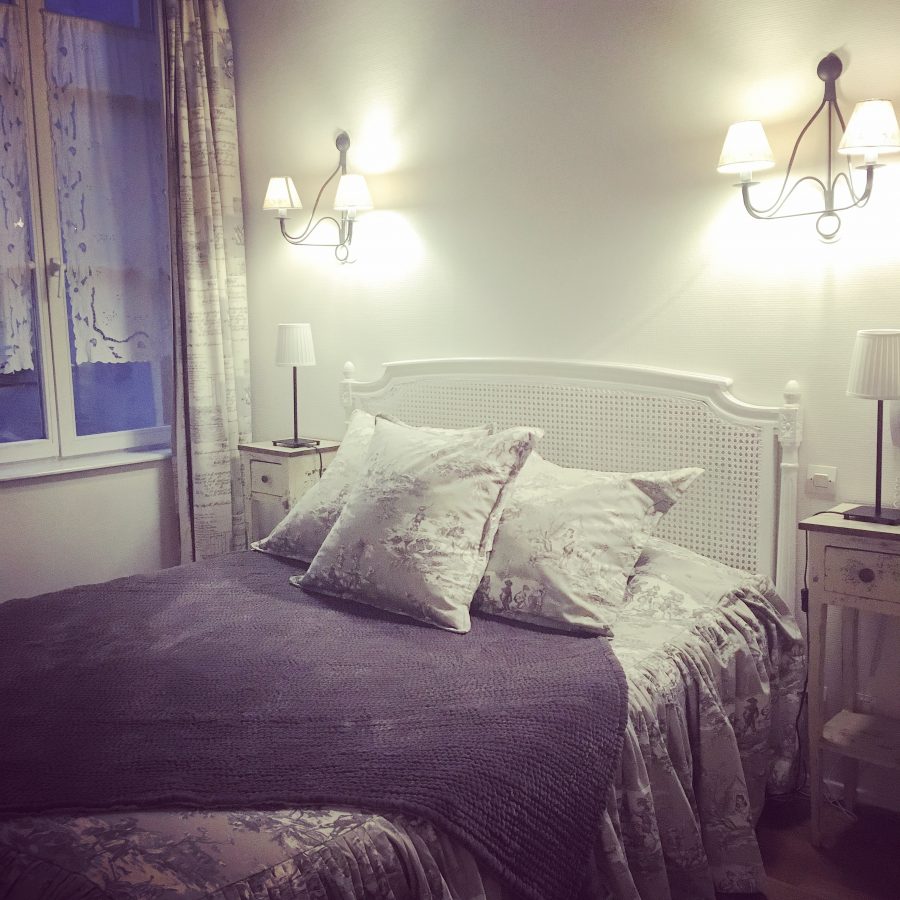 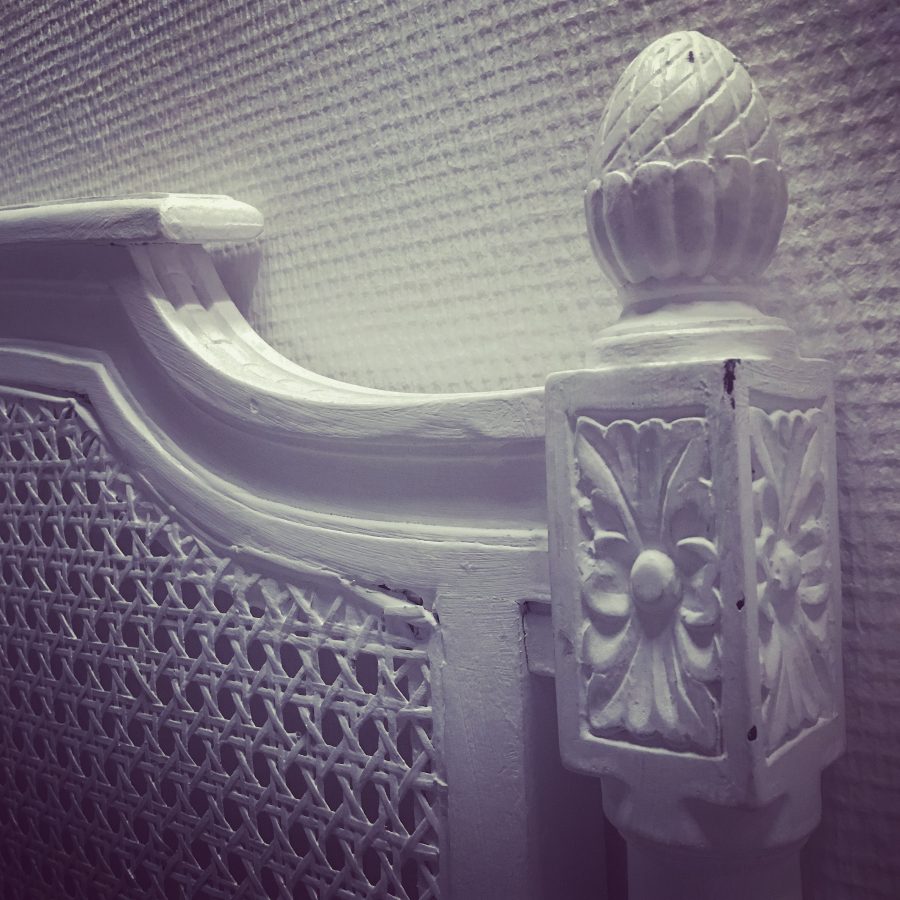 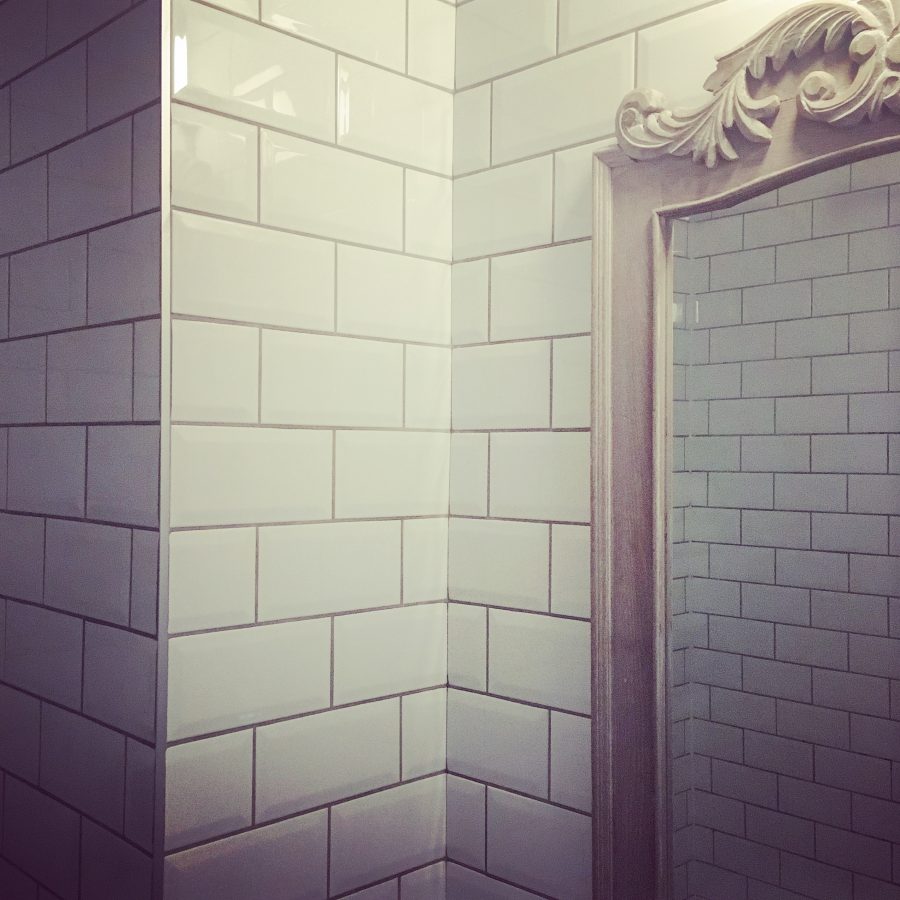 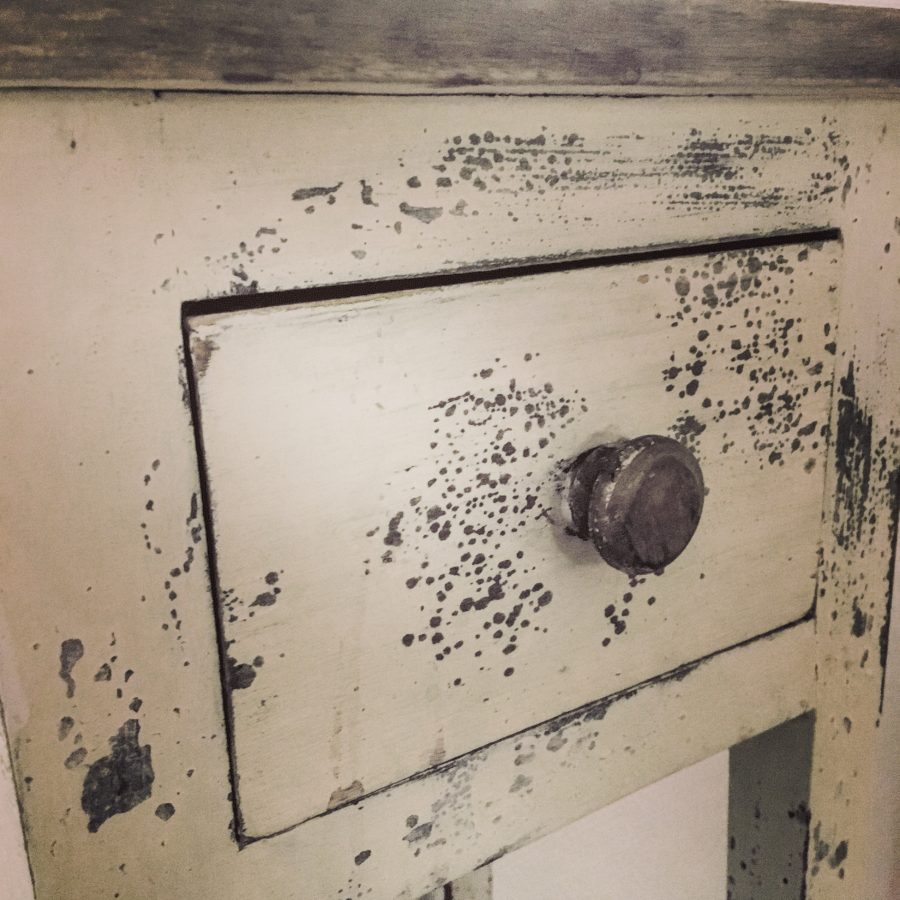 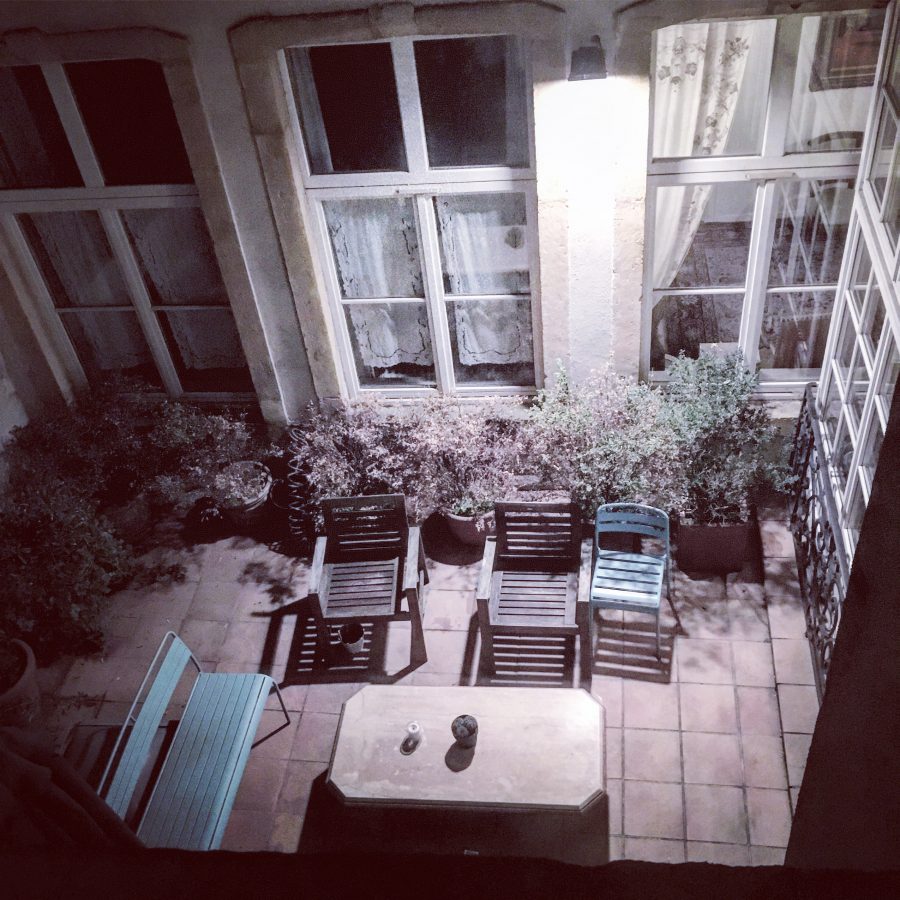 We arrived earlier this trip, and so took advantage of the additional time we had, to take in the festive atmosphere in Metz. There’s something about being abroad at Christmas – especially if it’s quite cold and everyone is wrapped up. It’s also really lovely seeing how other places “do” Christmas – I’ve yet to see anything on our travels, that’s not utterly exquisite. See for yourself – this is how Metz does Christmas… 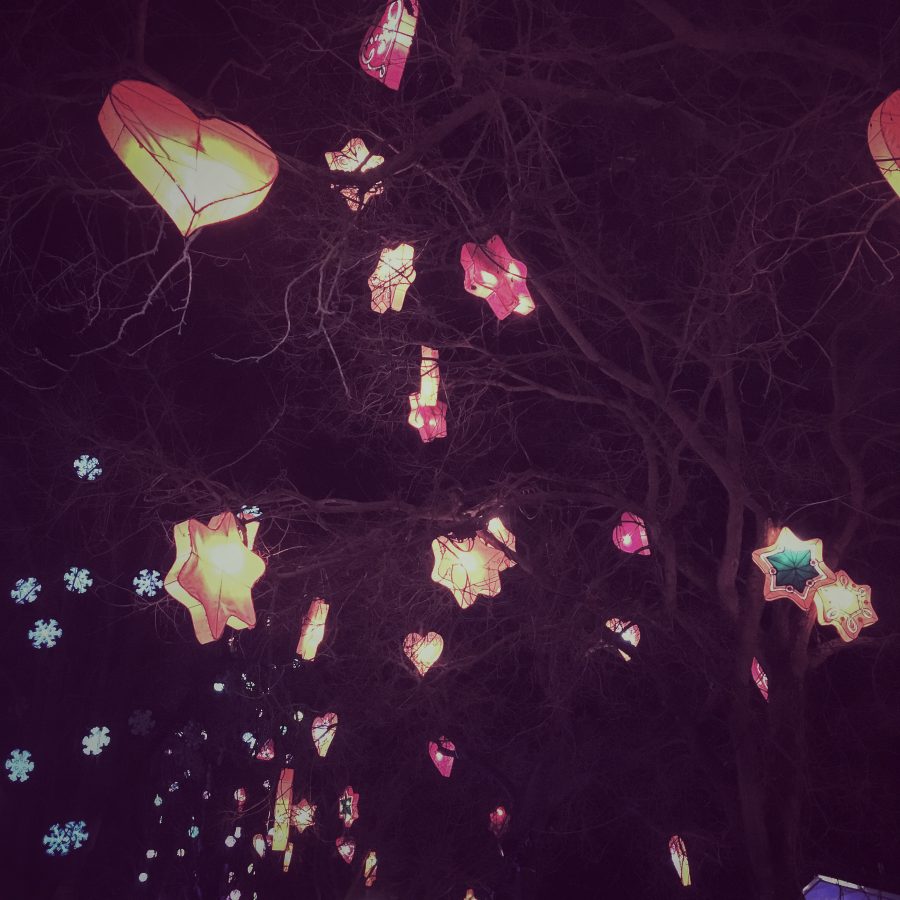 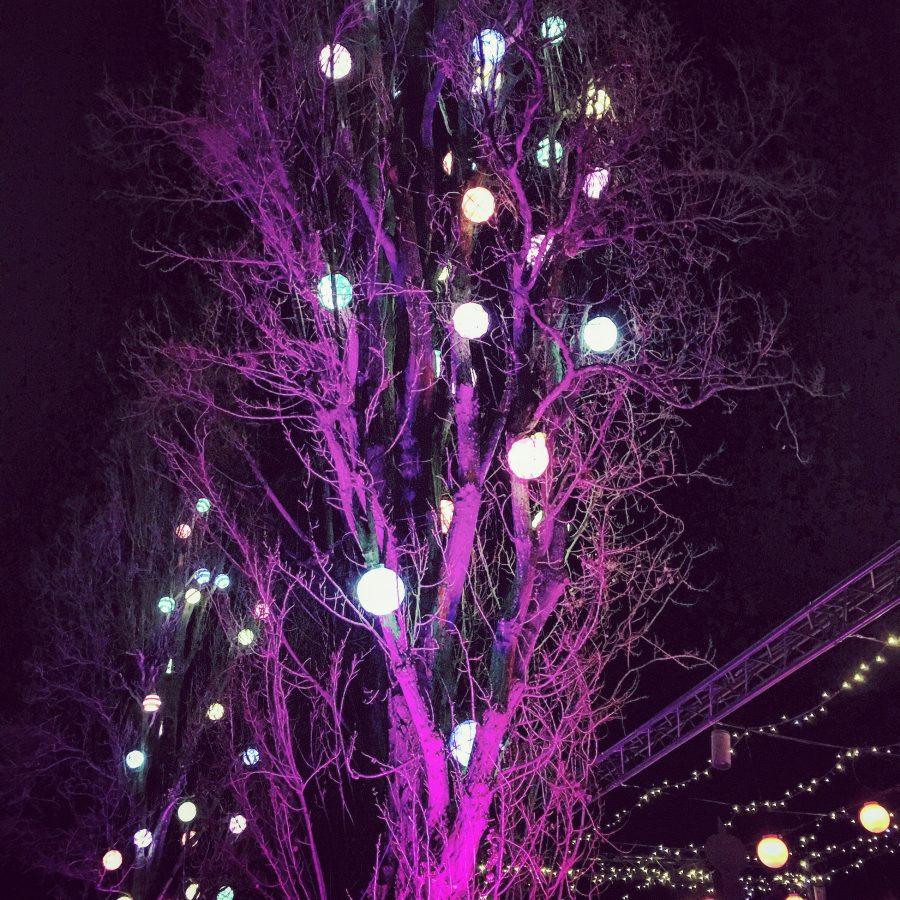 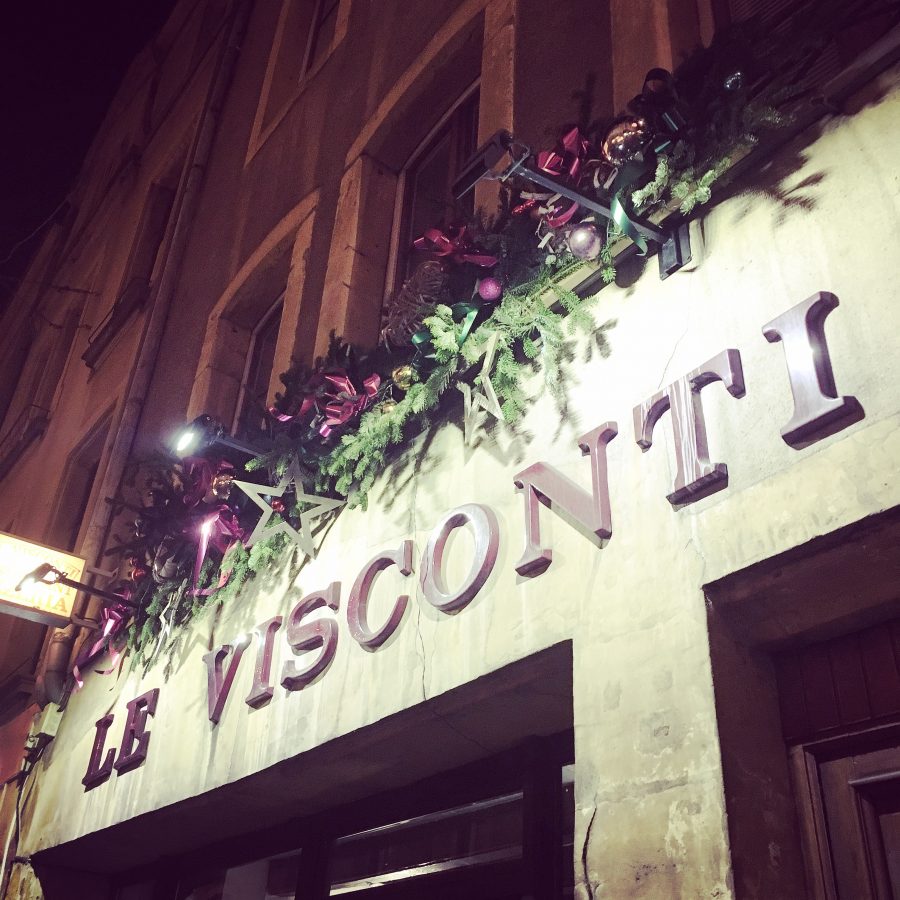 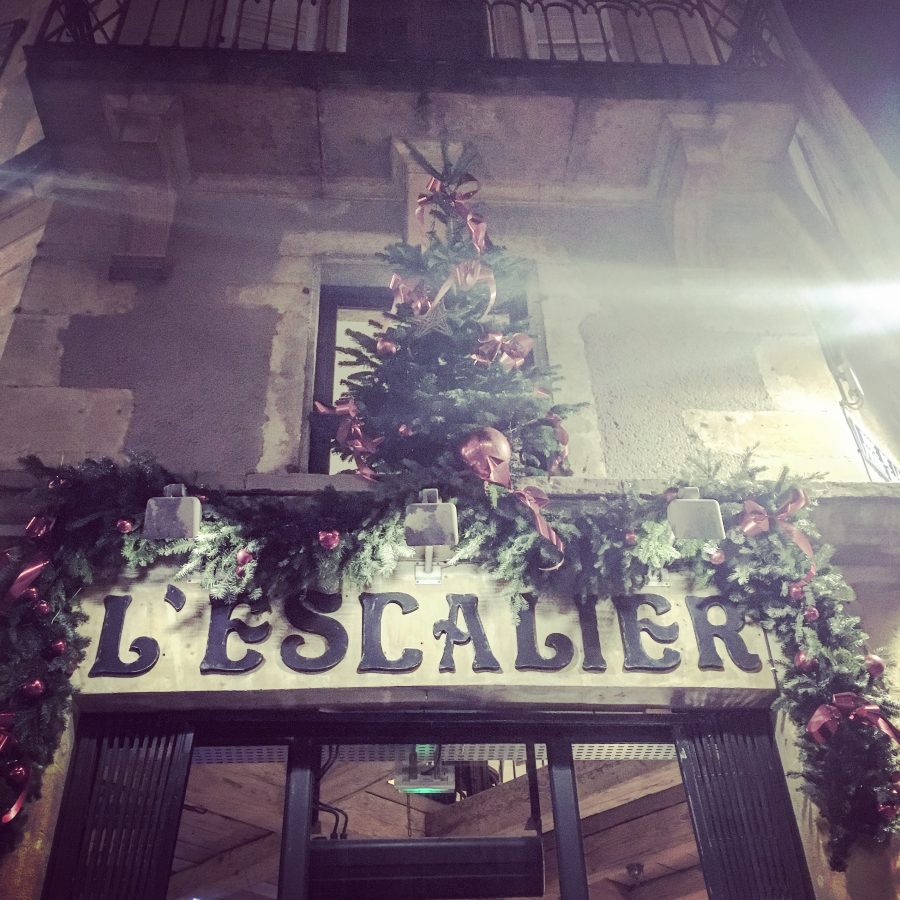 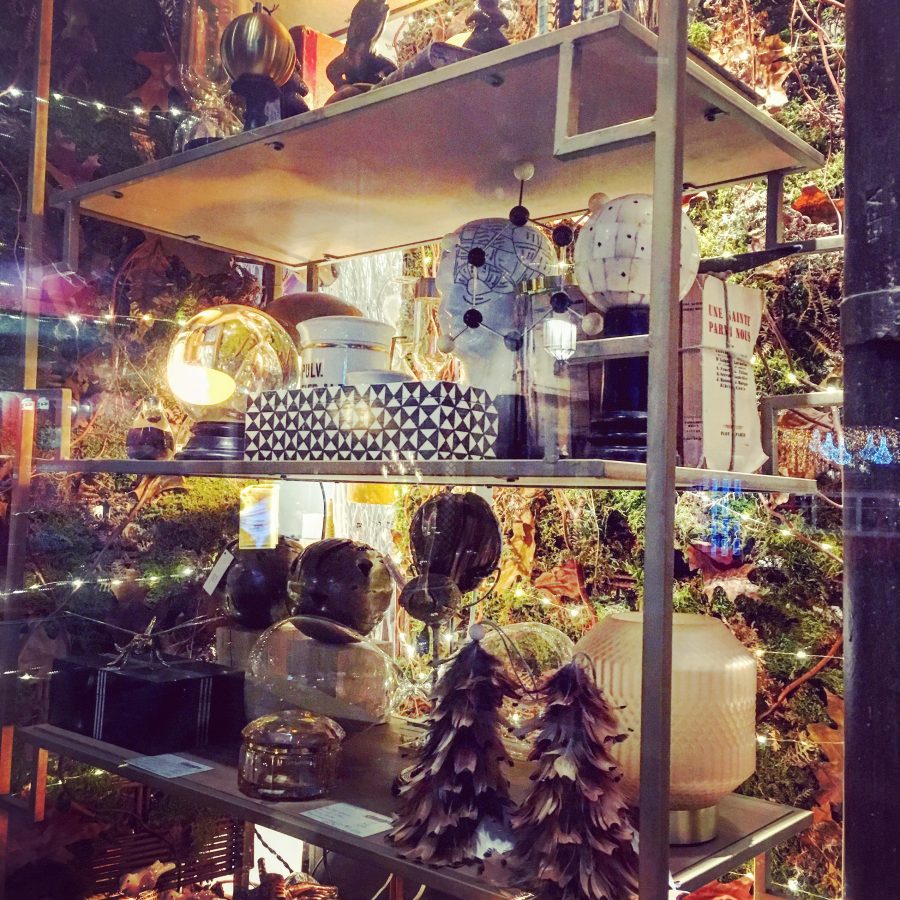 Iconic city centre buildings, such at the Cathedral (right opposite our hotel), were illuminated at night, to stunning effect… 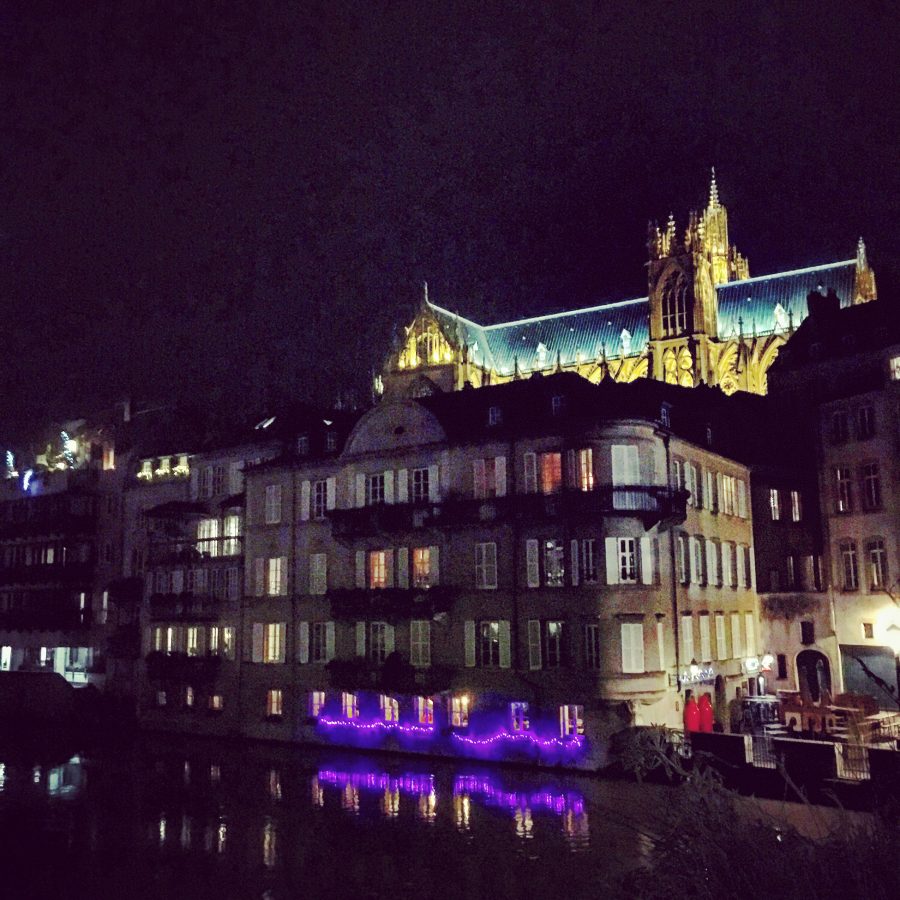 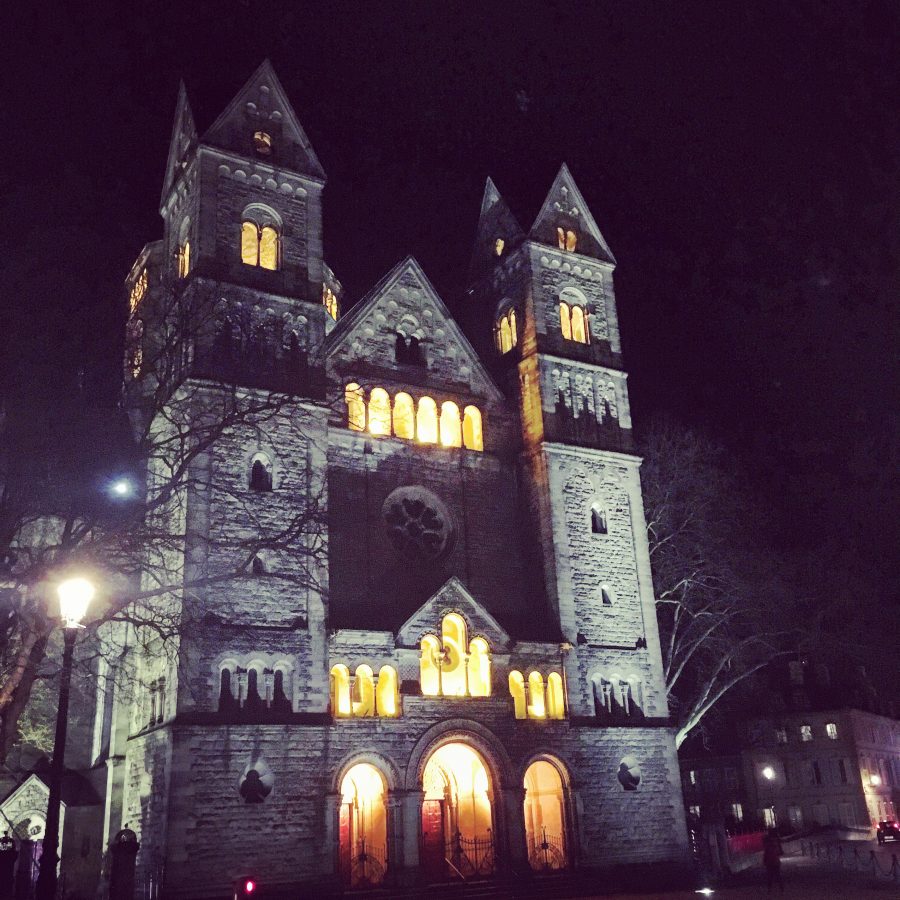 Another advantage to staying in the hotel we stay in, is that literally next door, is the most amazing restaurant – La Cucina di Casa. Always packed with locals – no English voices, all French. Always a good sign when the locals chose it! Not only is it sumptuously decorated with rich red velvet drapes, deep red and navy blue walls and packed full of gorgeous French paraphenalia, but it also serves the most mouth-watering pizzas. Thin bases, with just the right amount of toppings. 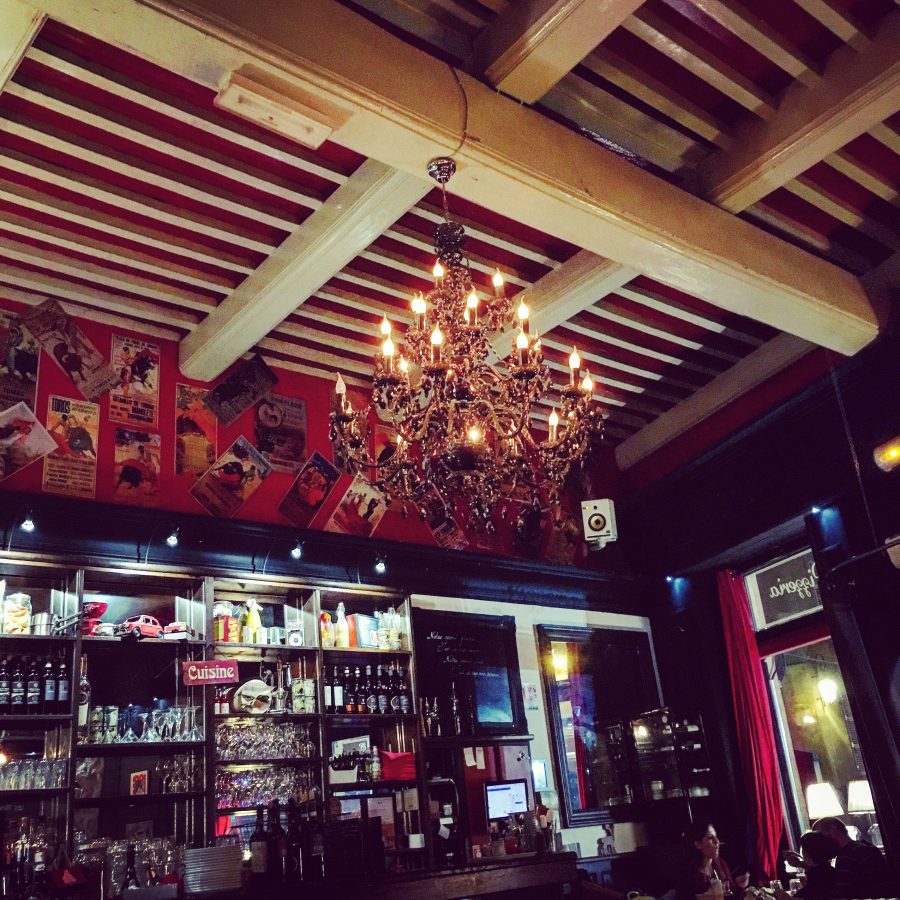 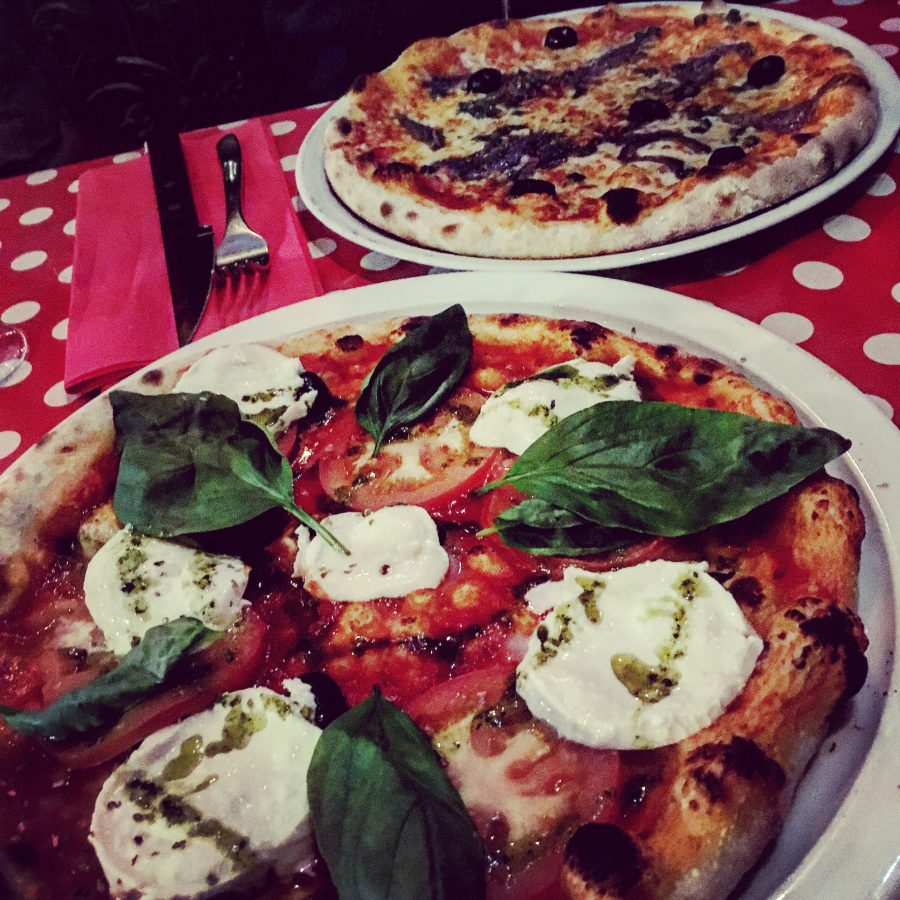 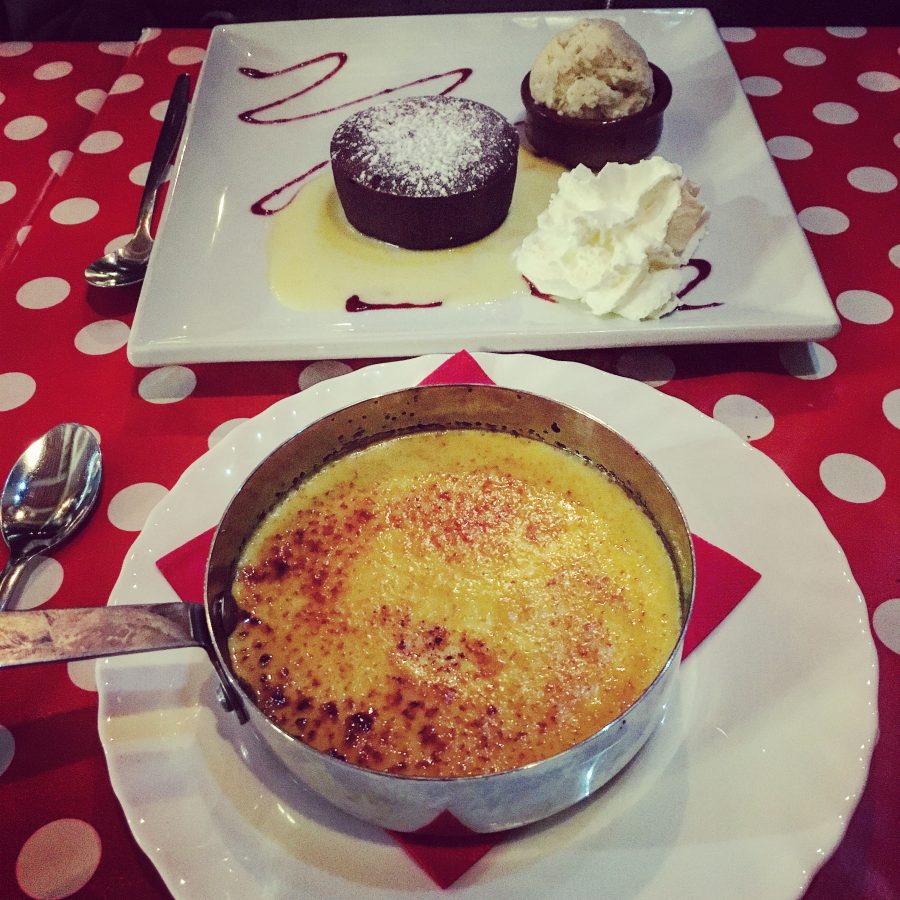 We do keep promising ourselves that we’ll make the trip to Metz in the spring or summer as it will be beautiful, but for us it’s just such a Christmas city, that I don’t want to break the festive spell, just yet…
← The Falstaff, Canterbury, Kent Salts Mill, Saltaire, Yorkshire → 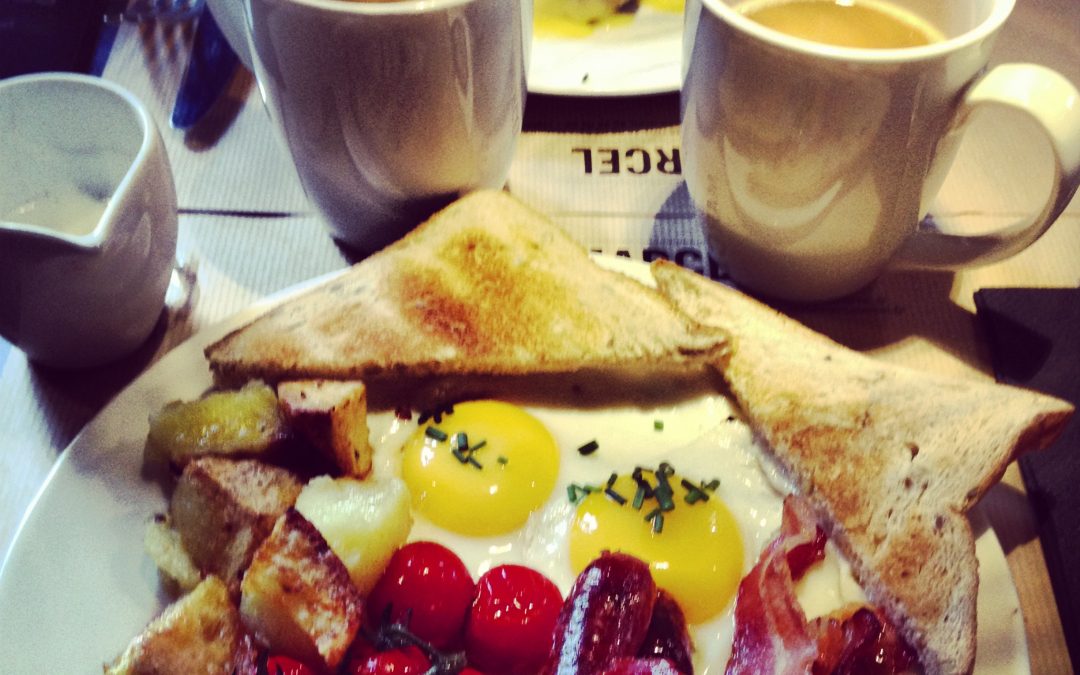 Although Paris is packed to the gills with the most gorgeous places to eat, sometimes its the unexpected ones you stumble upon that are the most memorable…

We recently stayed in Montmartre and Saturday morning was cold and grey – much like a home from home, so it was decided that breakfast was much needed to set us up for a day of sight-seeing. Having had two months of sweet Italian breakfasts, we were craving a savoury fix – and Restaurant Marcel just ticked those boxes perfectly.

Inside it was as achingly cool and cute as you like, and clearly a hip place for Parisiens to hang out on a Saturday morning. The decor was beautiful – greys and dark wood and low slung bare light bulbs. If Amelie had walked in, I wouldn’t have been surprised…

For the first time, in a long while, we had a hot, savoury breakfast – with two BIG cups of coffee. Bliss! And clearly, these breakfasts go down well with the locals too, as most people in there were having what we were having.

Another breakfast find was Le Pain Quotidian, situated on the corner of Rue Lepic and Rue des Abbesses, Montmartre – a perfect location to while away an hour or so, over a delicious breakfast.

Breakfast – best meal of the day! Especially if you’re lucky enough to be having it in Paris…

← Venice, Italy The Angel of the North →