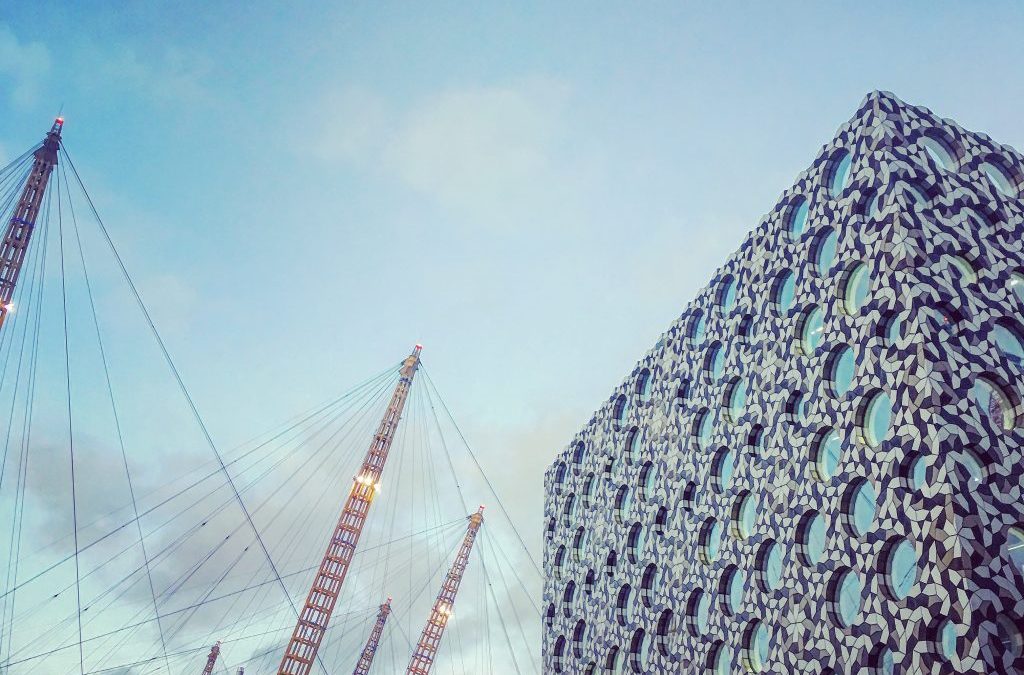 Not too long ago, when we still lived in Didsbury, we often thought about having time away in London, but never got round to it, because, well – London was just too far away from Manchester. The traffic would be awful. We’d end up sitting on the M6 or the M25. It was over-priced and over-crowded. And so, for a long time, we never did the trip. The last time we were in London was, I think the early 90s. But things are different now. We think nothing of long trips – and so when we were planning our Christmas road trip back to England, we decided that this time we would take in London. 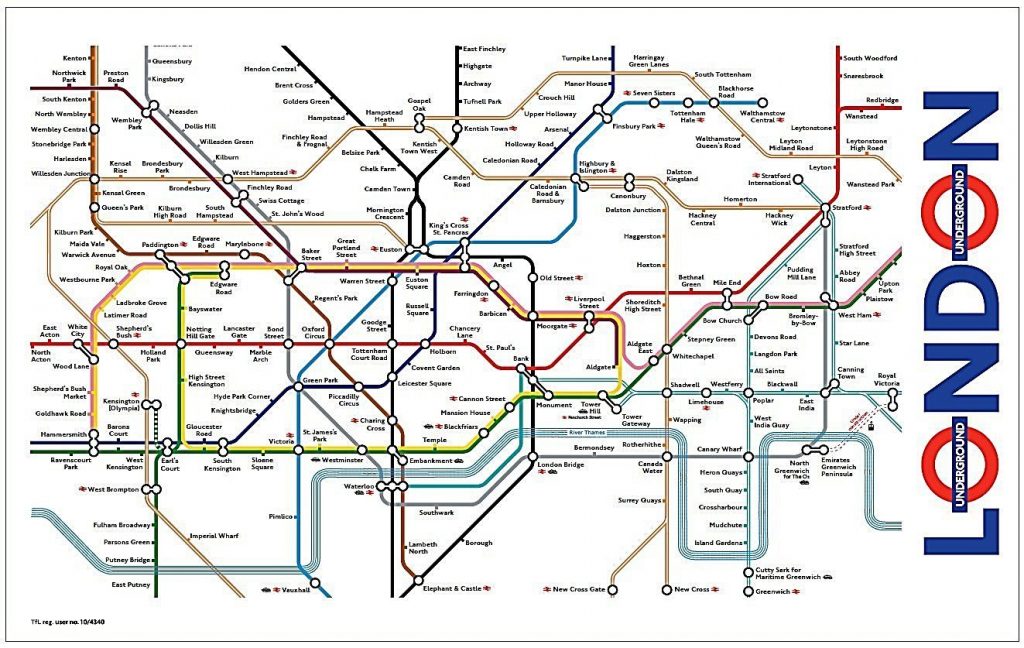 Not all of it, of course – we were on a fairly strict timescale and so had to narrow down where we were staying, so that we were able to do a bit of the touristy trail, but also head up to Manchester quite quickly. As we were driving, we took a ferry from Calais to Dover, so it made more sense to stay in the East, rather than driving through the London traffic on the afternoon of the last Friday before Christmas. Rather than search by area, I searched for accommodation that I liked the look of first, and then checked out the area – and this was how we came to find the very lovely Pilot Inn, in Greenwich. The journey from Dover up to Greenwich was easy – just over an hour, straight up the A2. No traffic jams either. As you will all know, Greenwich has changed beyond recognition. We’re lucky enough to now visit lots of places on our roadtrips, but there was something quite exhilerating about being a tourist in London, and seeing for real some of the landmarks we’ve only seen on TV.

My usual choice of accommodation isn’t usually a pub with rooms above, but The Pilot Inn ticked our boxes. It has been refurbished and whilst it is still a pub downstairs, it has been very stylishly renovated. There’s a restaurant too, and we chose to eat here – it’s clearly a very popular choice amongst locals as it was packed. The food was exceptionally good, too – definitely not pub grub. Breakfast next morning was as good, with plenty of vegetarian options, too. Our room was lovely – just what we needed after a long journey through Slovenia, Austria, Germany, France and across the channel. Very tastefully decorated, with a super comfy bed, metro-tiled bathroom with a powerful walk in shower, strong wi-fi and views of the O2 Arena and the iconic gas holder at East Greenwich Gas Works. Another bonus was free parking bays, just outside the accommodation. 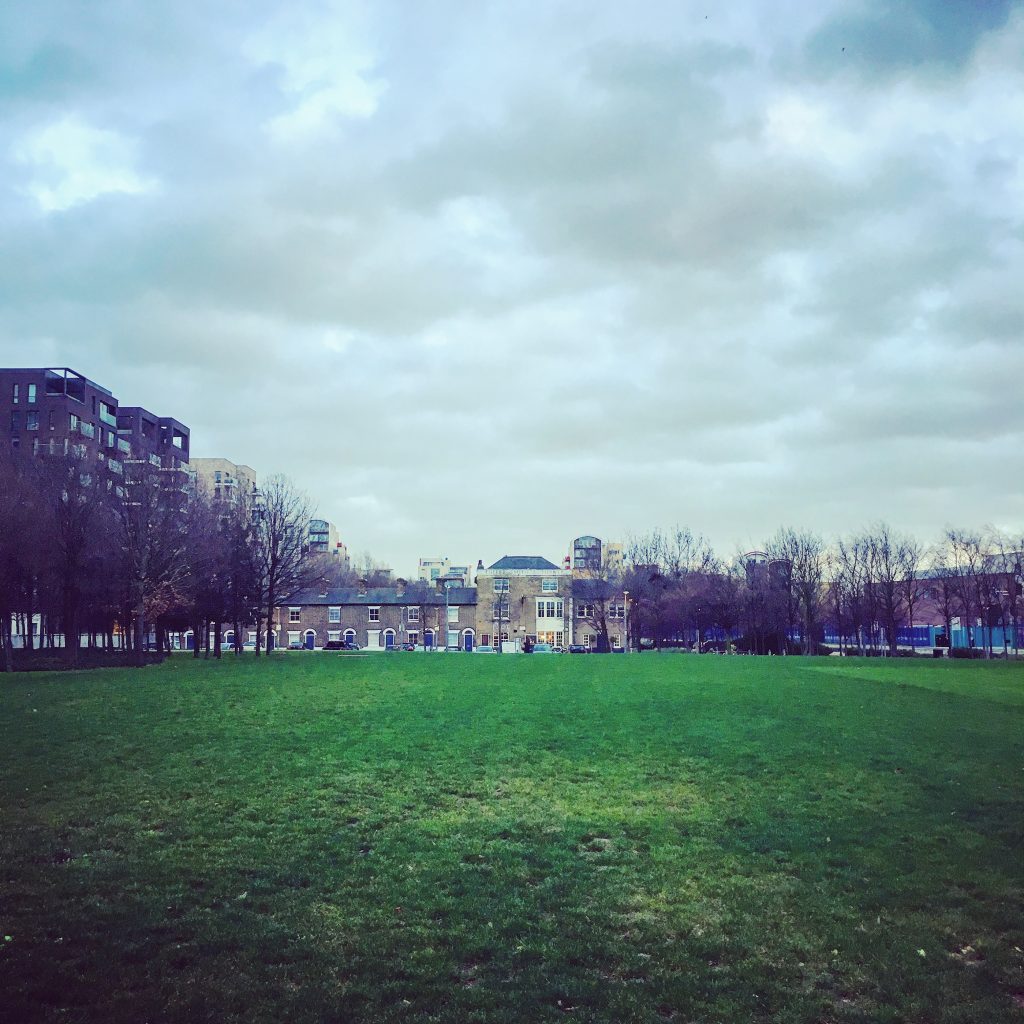 A good sized piece of green space, right in the heart of Greenwich Peninsula. The Pilot Inn is at the end of the little terrace, to the right. 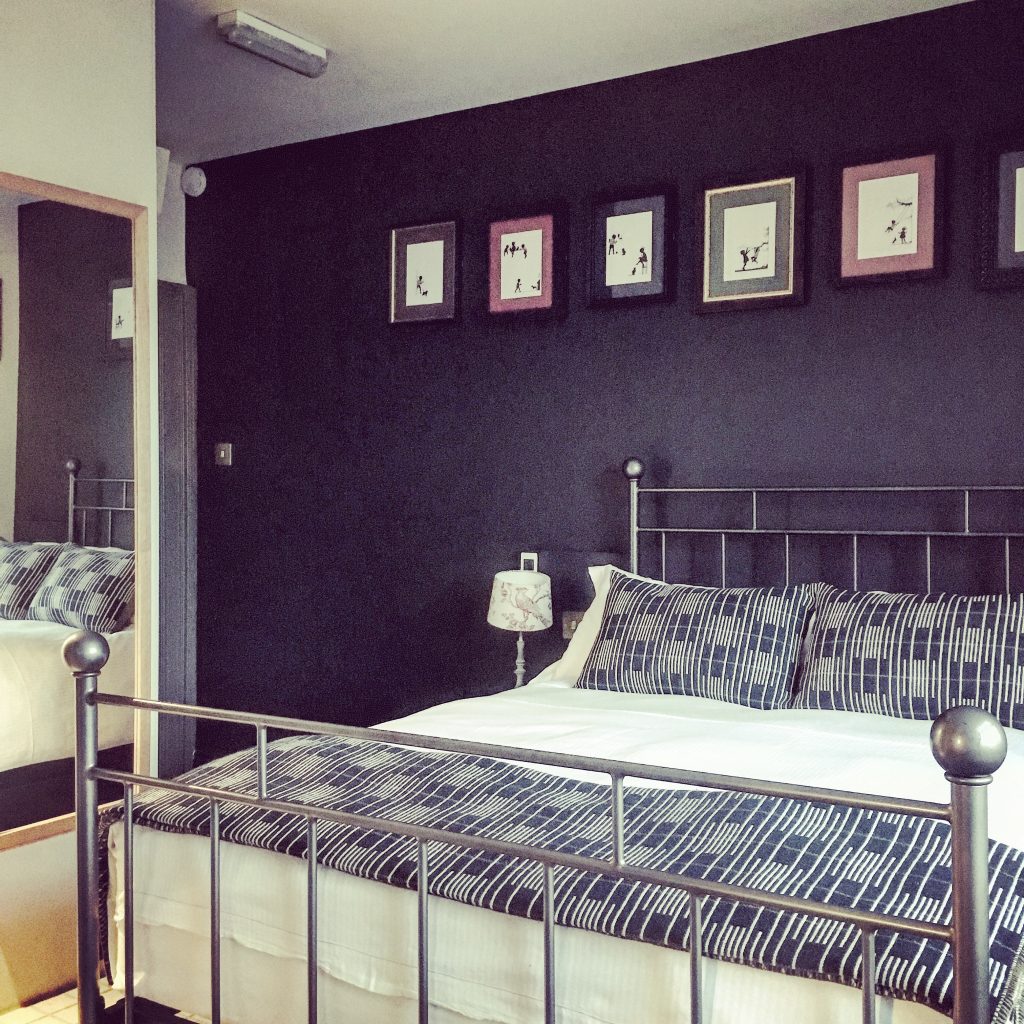 Love a navy wall. Makes me feel right at home! 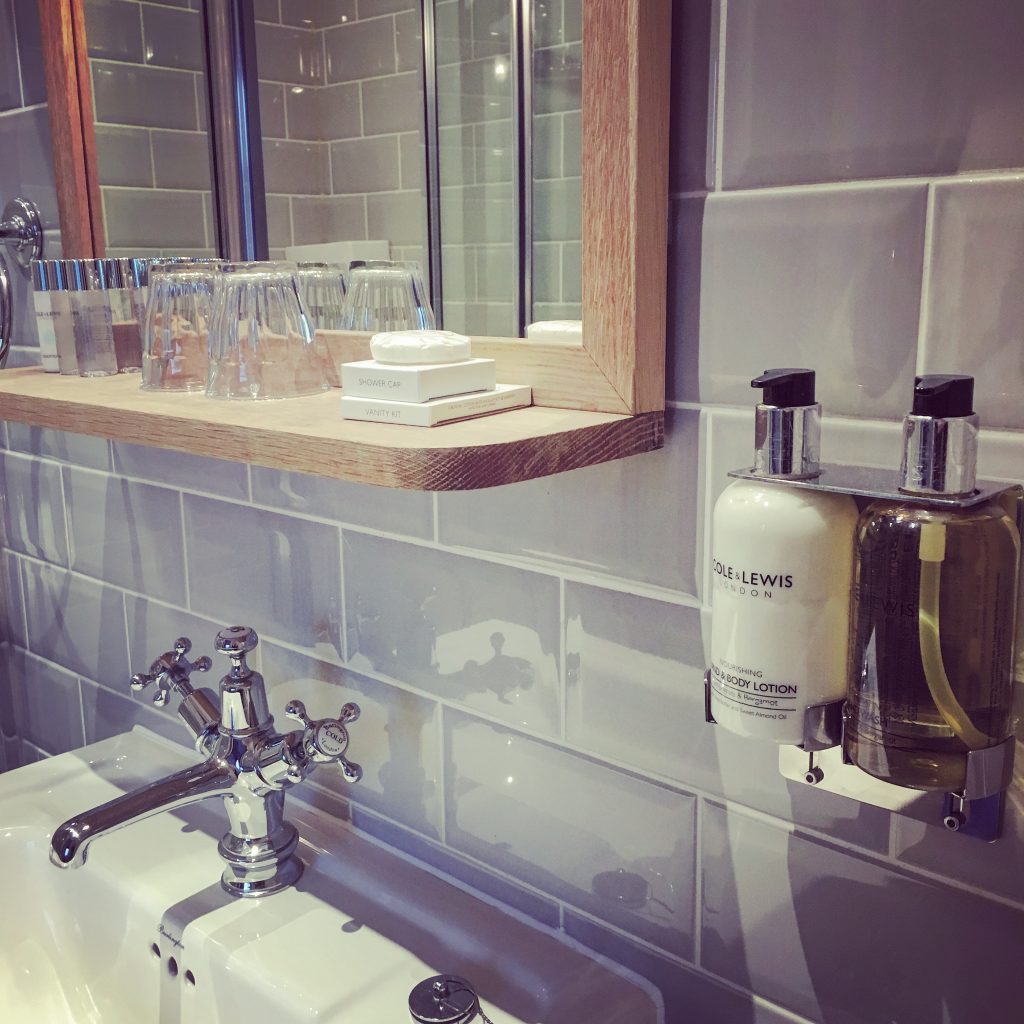 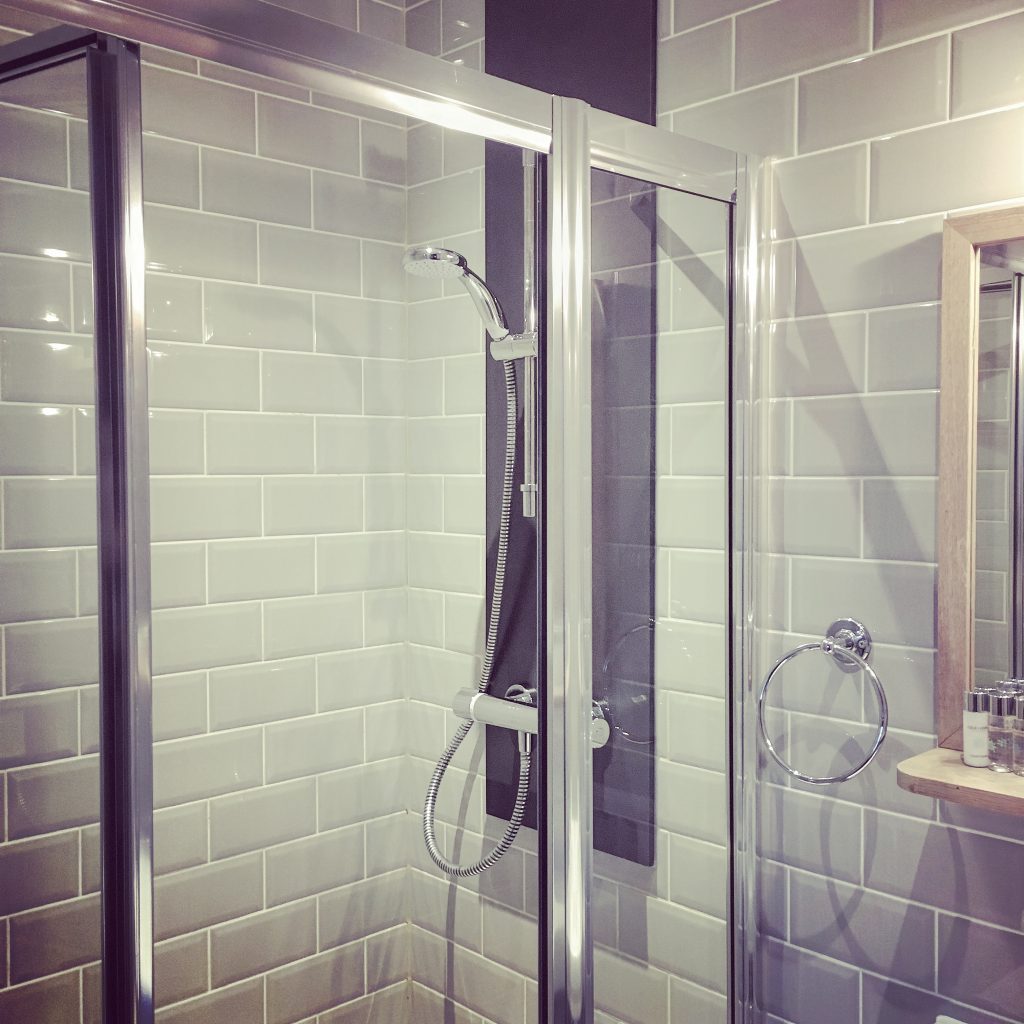 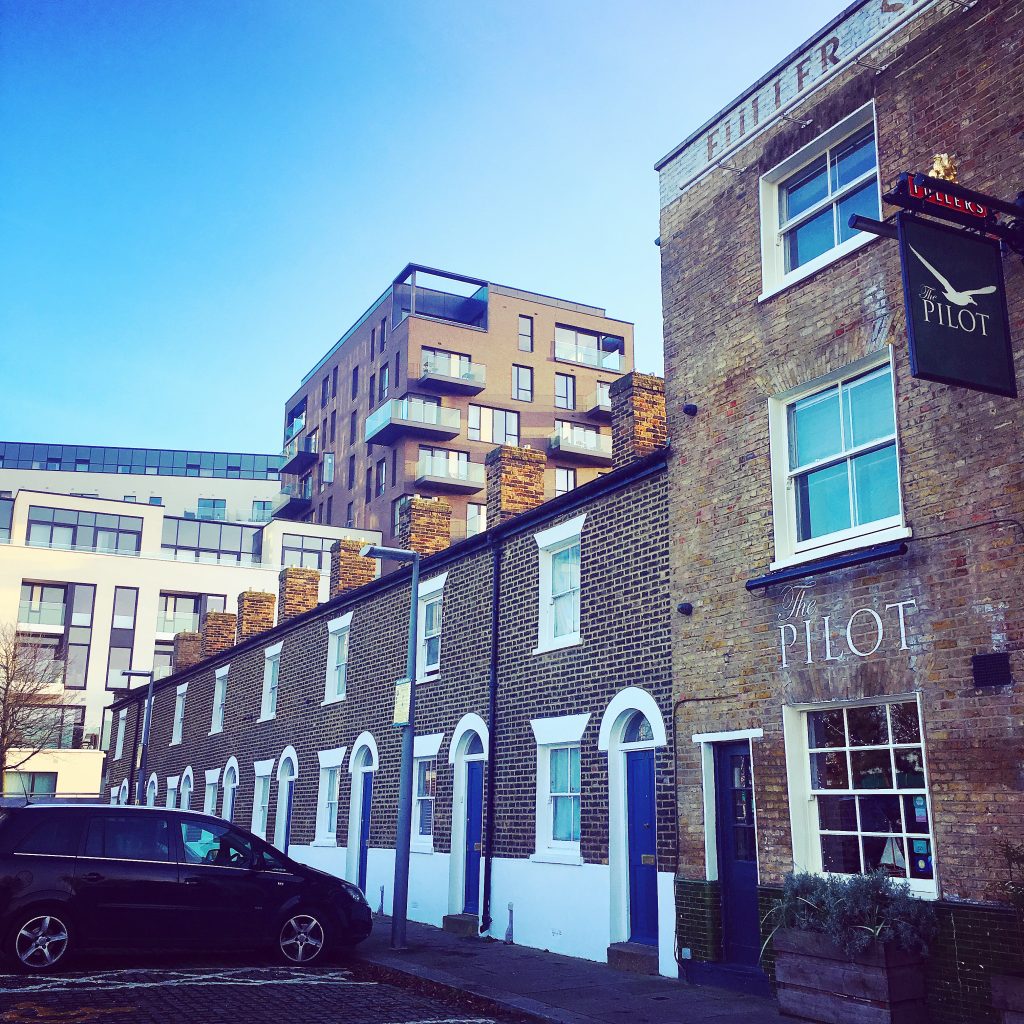 River View, Greenwich, with The Pilot Inn at the end of the terrace. The very terrace (albeit with doors now painted blue) that featured in Blur’s “Parklife” video… 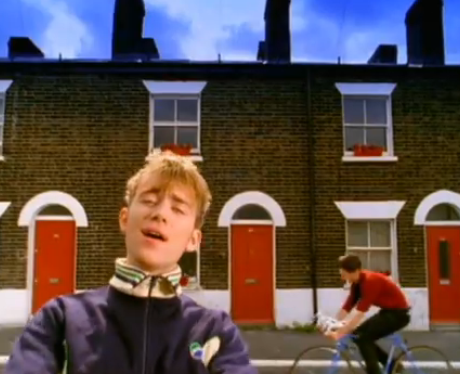 The Pilot Inn is perfectly located for the O2, which is no more than a ten minute walk away. Again, ashamed to say, we’ve never been here since the area was redveloped and so were quite surprised at how beautiful it all is now. With the Canary Wharf glass towers glistening in the winter sunshine, and the redevelopment of the river area, and the explosion of modernist buildings around Greenwich Peninsula, we really did regret not having taken more of an opportunity to explore the capital when it actually was a lot easier. Now, a journey of four hours seems nothing. Previously, it seemed like such a long time to spend in a car. How your perspective can change!

We spent a good few hours just walking, taking it all in – and I even persuaded my other half, who has a very real fear of heights, to do a round trip on the Emirates Air Line, which crosses the River Thames between Greenwich Peninsula and the Royal Docks. I thoroughly enjoyed my aerial view of London. Not too sure about him… 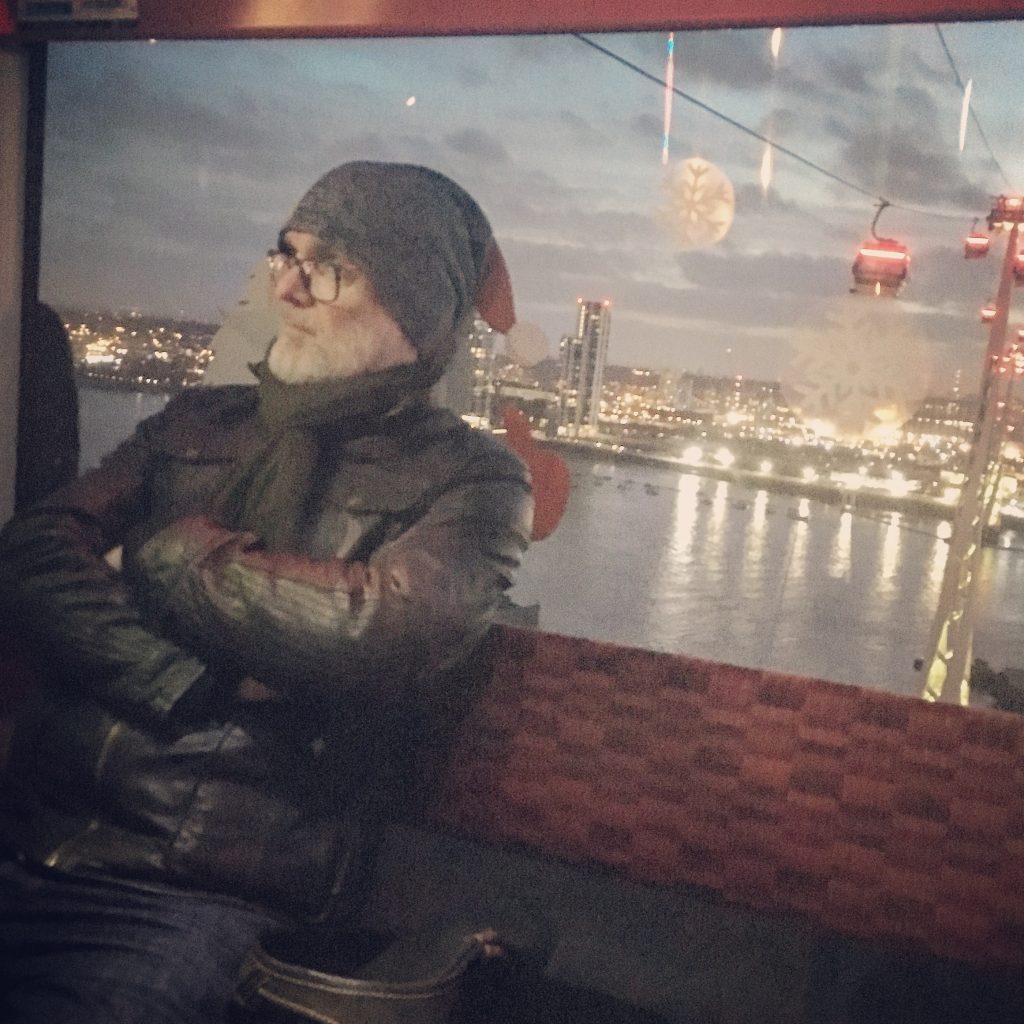 Body language. Arms folded. Steely, fixed expression. *I am not enjoying this* 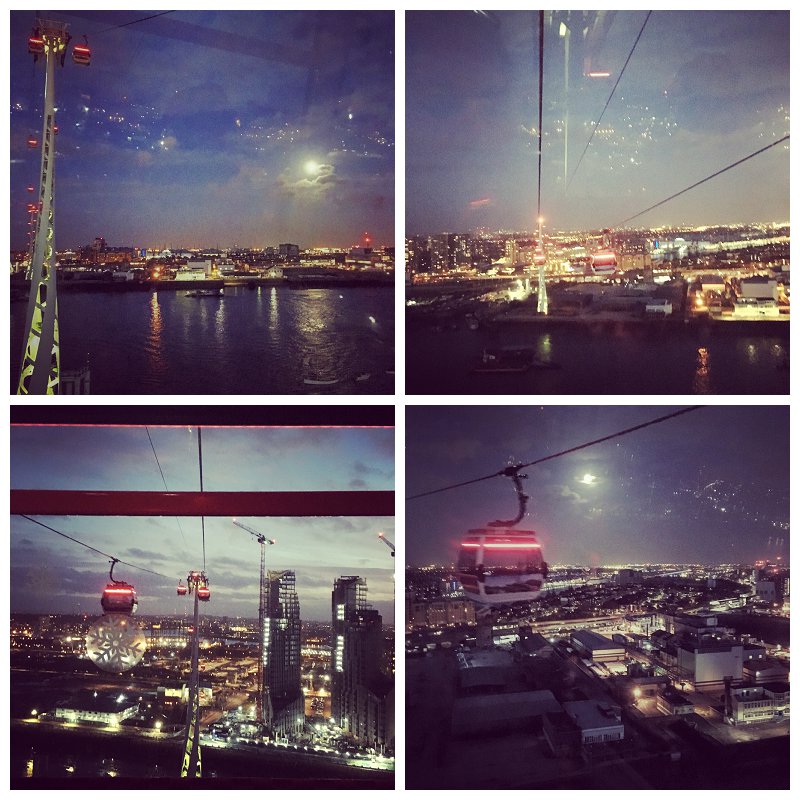 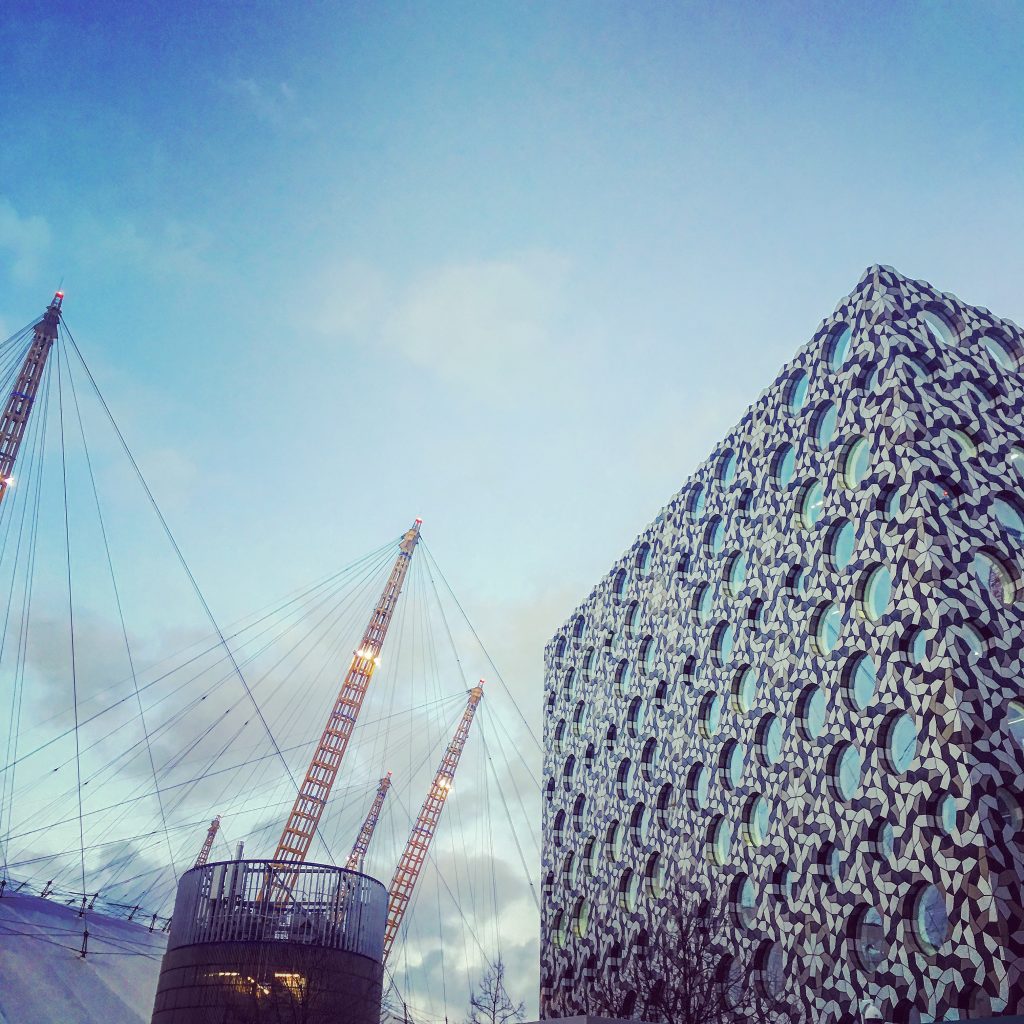 Beautiful facade of Ravensbourne University, next to the O2 Arena

It was a shame the next day that we couldn’t extend our touristy trip of London, but we had to head north to Manchester. Instead of skirting around the M25, we decided to do a drive through the city and so were able to see some old haunts, as we drove through Deptford, Bermondsey, Southwark and over Tower Bridge to the north of the river. We’d wanted to get to see The Cutty Sark, The Royal Observatory, The Naval College and of course, a bit of retail therapy at Greenwich Market, but time was against us. 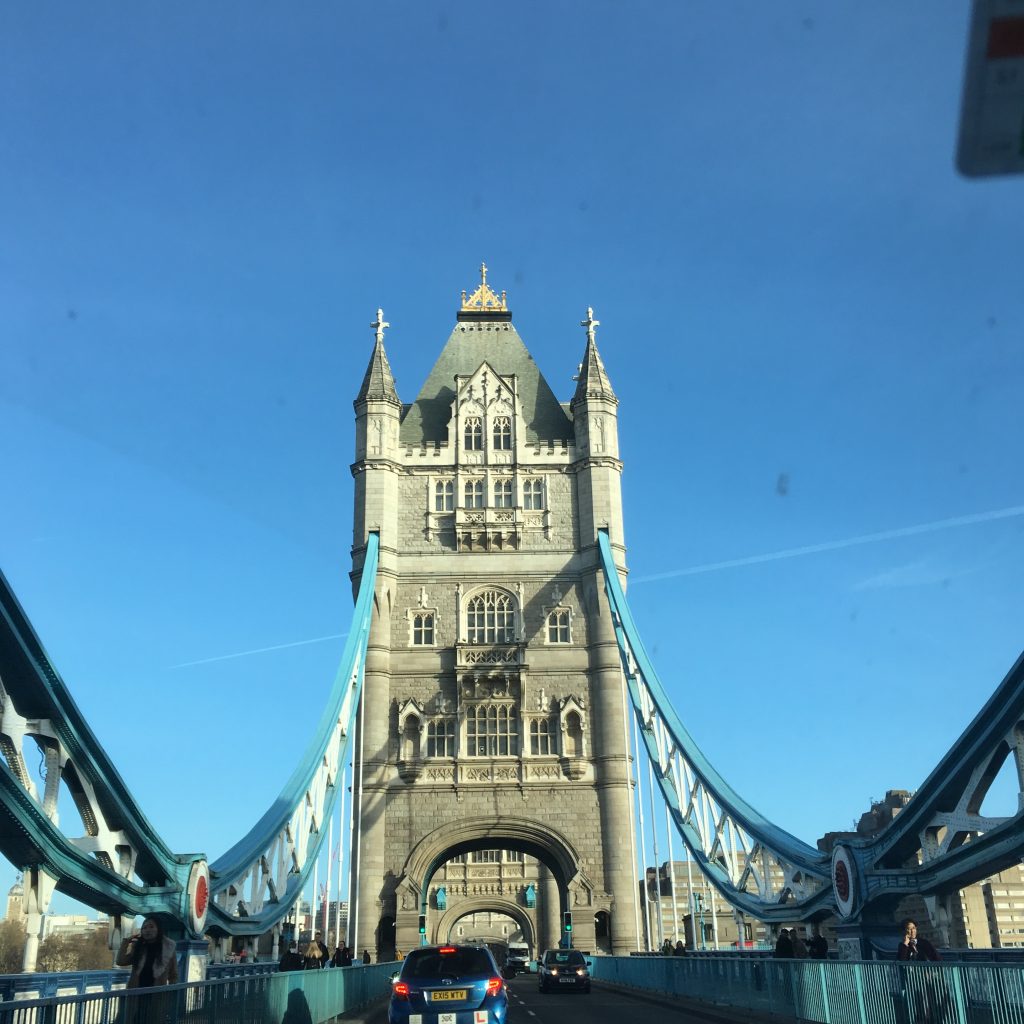 However, our taste for London has returned. Now that our preferred way to get back to the UK is by driving, we’ll factor in a capital visit next time. Especially as I’ve now got my eye on The Good Hotel – the concept of which is described on the website as combining…

…premium hospitality with doing good for the local community. The hotel is located in the historical Royal Victoria Docks in London, on the river Thames, and is a profit for non-profit business. This means it employs a social business model that re-invests all its profits…