We knew we had to tackle this part of the garden, because it was overgrown, messy, full of stones and rubble from previous renovation works and the trees were literally being strangled by vines and brambles.The little stone wall was falling down in places, and in other places, held together only by creeping ivy. Nothing could grow at ground level because no sunlight could get to it. We look onto it from the side of our house and from our garden, and it has always been an eyesore, but there’s always been so much else to do, that it seemed a waste of time, tackling this previously.

We also don’t actually own this piece of land. It was once mooted that we look into the purchase of it, as it’s owned by the local Opcina (local council) and they are often willing to sell parcels of land like this – but, it is actually a huge piece of land in total and would have been difficult to keep on top of, and we weren’t actually sure how we’d make use of it. But, as our house is now for sale, and now that we’ve finished the internal renovation, it’s been decided that we’ll tackle the bit of land closest to us. The wall was rebuilt last year – it’s now much sturdier and falls apart less frequently! We’ve also planted succulents in many of the gaps, so in the summer, it’s actually now very attractive. So, as spring has now appeared, we’ve been dividing our days between design work and garden work. The first phase of this external renovation is now complete – all of the scrubby, twiggy branches and trunks have been removed, now revealing proper clumps of trees. Vines – so strong that they were probably the kind that Tarzan swung from – have been pulled out at ground level and carefully unravelled from the trees. This was a long, hard job as we didn’t want to damage the trees, but definitely wanted the vines out. They’ve all been removed now, and chopped up as they actually make fantastic kindling for the woodburner.

With the vines removed, we could assess what else was wrapping itself around the trees – brambles were prolific and again these were carefully removed and chopped up. Ivy was another plant which we removed – although we were reluctant to do this initially, because the birds feed off the berries in the winter. However, we reasoned that the ivy on the green wall in the garden, and the ivy covering our little abandoned house, provided a very good supply of winter berries. so went ahead with the removal in this area. Storms and winds had also broken many branches which were either just hanging on, or had broken off and were lying intertwined in other branches. All now gone. Meaning that we have enough wood and kindling to see us through the spring. So, what have the last few days looked like in the garden?

We had previously put down black plastic sheeting to try and slow down the growth of weeds and vines and ivy. Over the course of the winter however, when we had the car parking area laid, the soil and rubble which was dug out, was dumped in this patch of land, and so this had to be bagged up and cleared before we could do anything. This looks nothing – but this was at the end of the initial clearance. We did sift a lot of the soil to go back onto the plastic, as this would form the basis of what would become the lavender patch. This was a particularly horrendous job, as it was raining at the time, and once the red clay soil gets wet, and on your wellies, that’s it.It is impossible to remove completely and inevitably gets dragged across the painted patio and up into the house. And is an utter nightmare to clean off. But, another job we knew we had to do, as there was no way we were buying additional soil when we already had this. 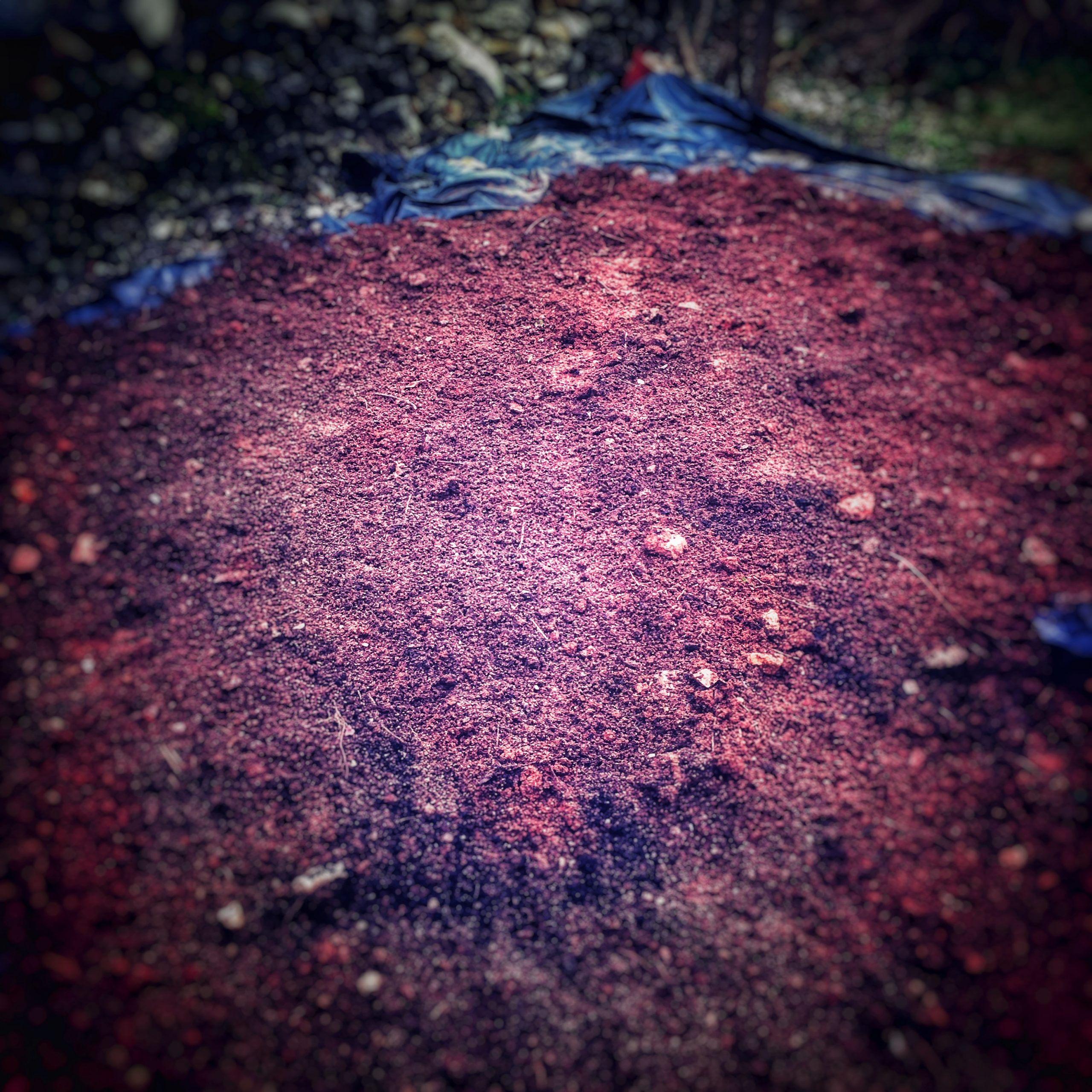 The next thing that had to be tackled was the undergrowth – and this had to be done by hand, as it was too thick and the trunks too strong for our cutters. The amount that we wanted to cut back seemed daunting, but we knew that the tangled, knotty undergrowth had to be cut back if we were to create something a little bit more magical, so teeth needed to be gritted and the tree saw put into action. 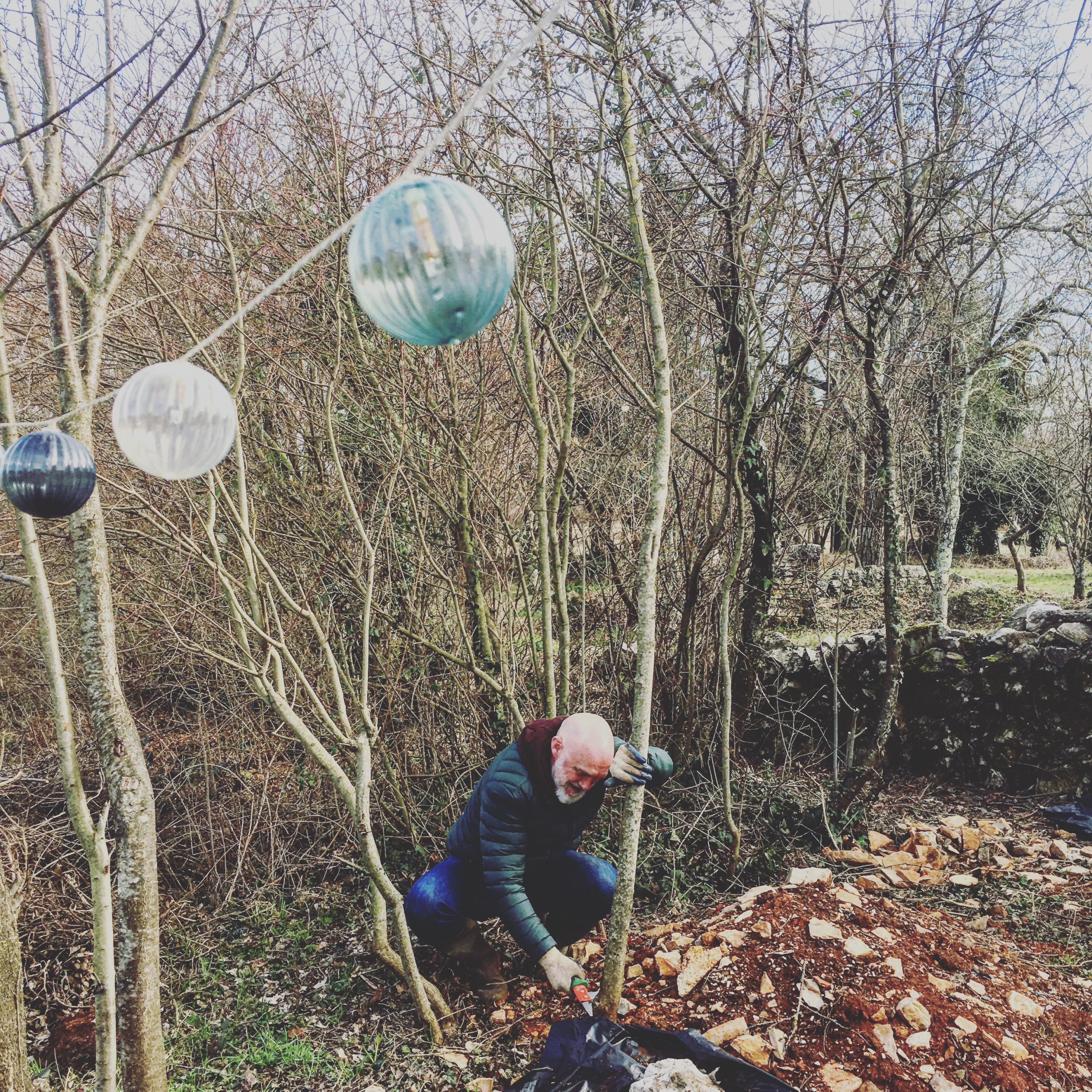 Once the red soil was down, we then dug a channel around the perimeter to sink in the small fencing, to create the bed for the lavender plants. 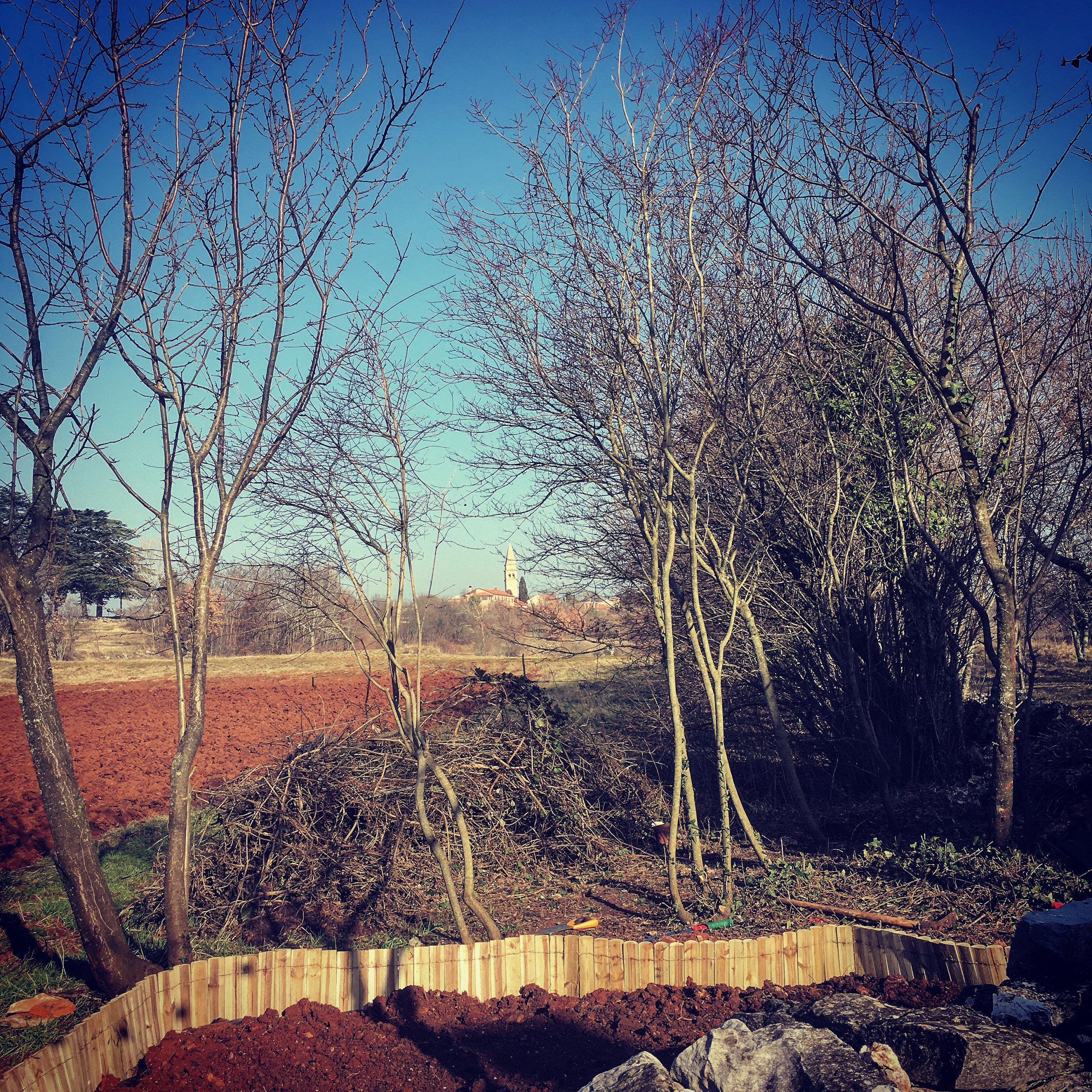 Top soil was added and we started to position the plants – but it became increasingly clear that our optimistic purchase of twelve plants was way short of the mark, having underestimated the size of the patch we’d created, so it was back to the nursery to purchase another dozen. Plus a couple of beautiful mimosa plants, to add to the colour elsewhere in the garden. 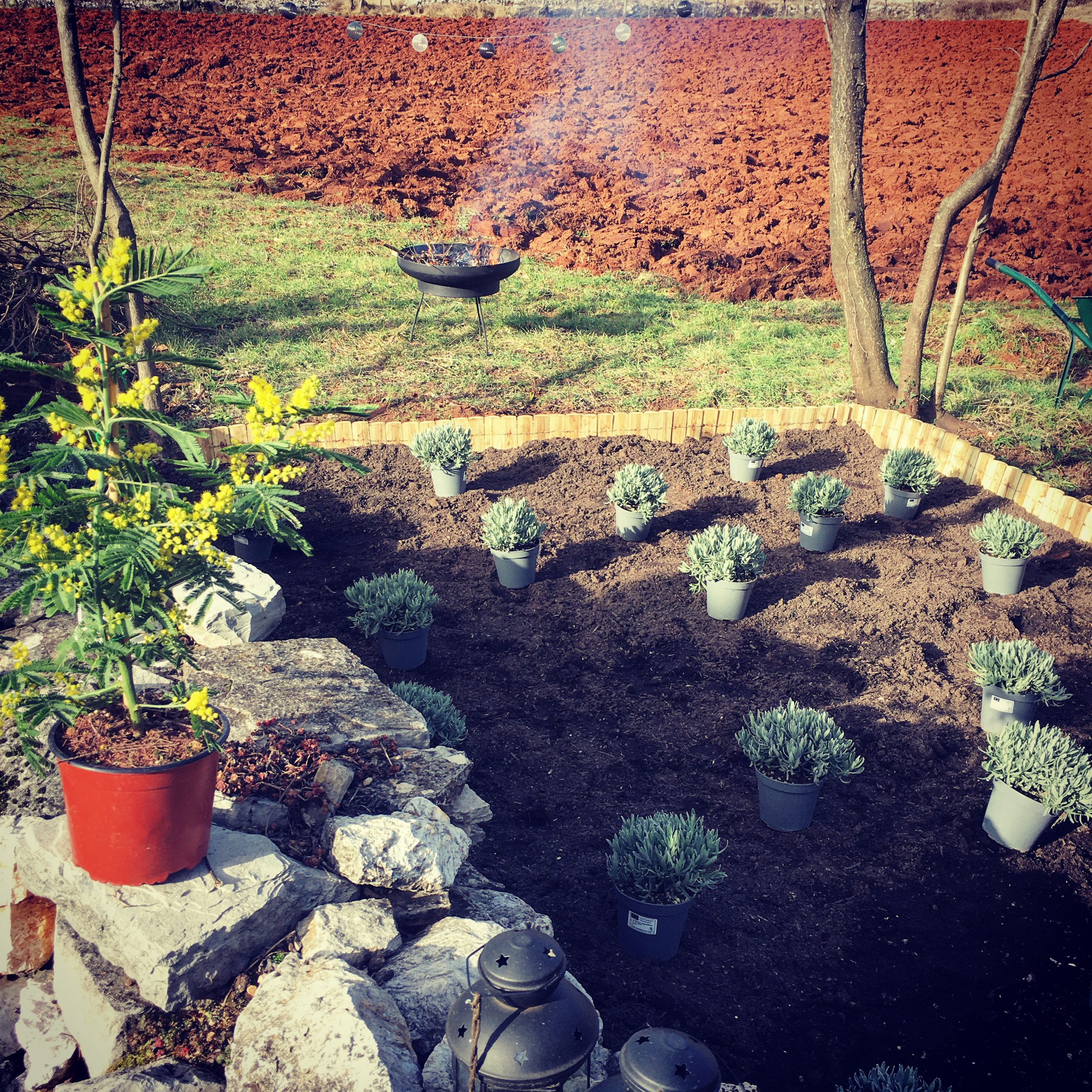 Next up, was quite a bit of fire pit action, to begin getting rid of the dead branches and cuttings etc. I’m sure that anyone who saw us lighting a fire-pit would have thought we were mad. Round here, you just seem to set to fire to things like this, on the ground – definitely not in a garden fire pit. But we didn’t want to be responsible for an out of control fire, and so played it safe…

As there is no lighting – yet – in this part of the garden, solar lights are in place for the time being, just so that when it’s dusk, there’s a little bit of light, which does look lovely from the kitchen, which overlooks this area. 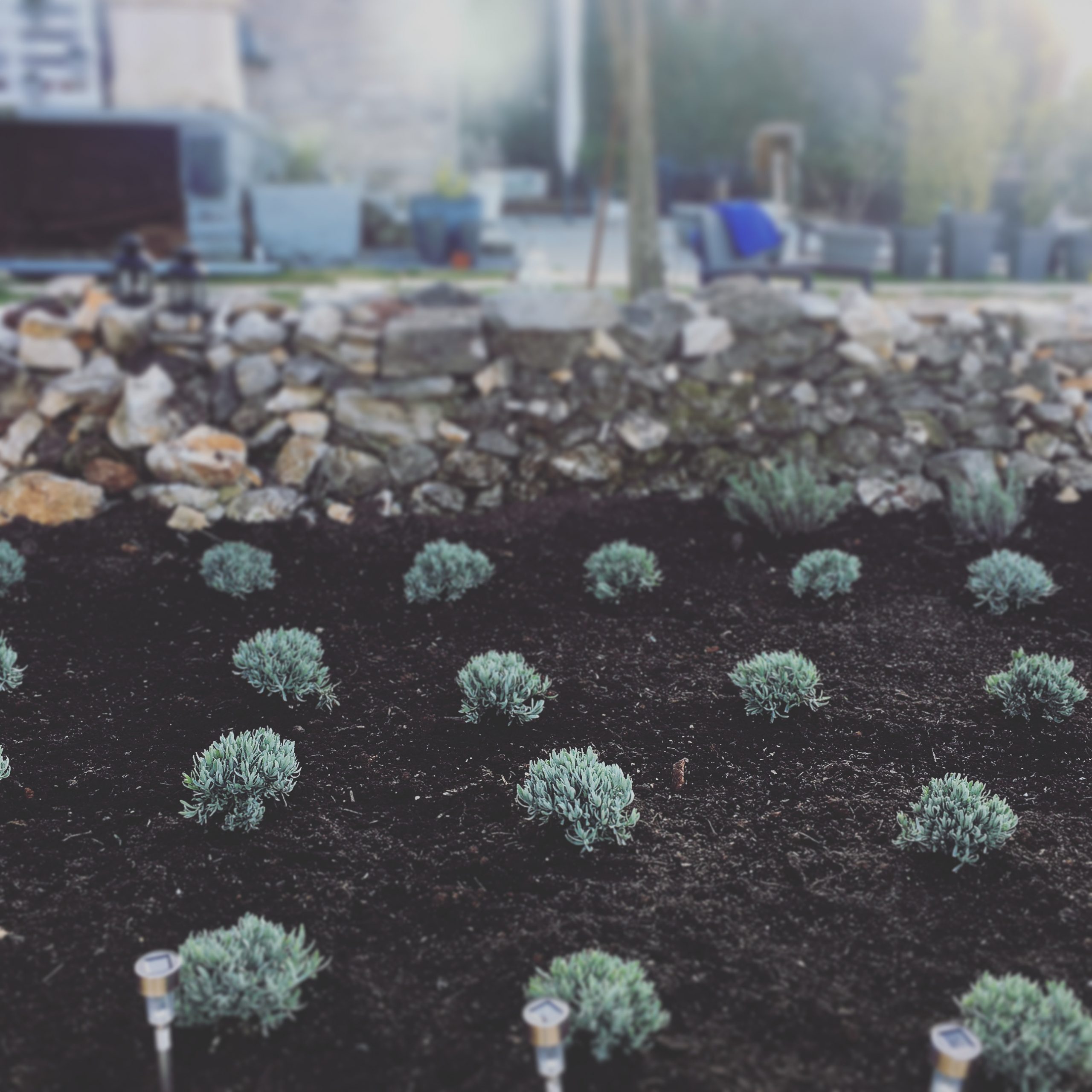 We had a couple of day’s work, cutting back the trees to the side of this piece of land and keeping on with the pulling up of vines. At some point in the past, someone has chopped trees down, as once the undergrowth was removed, the ankle-breaker tree trump stumps revealed themselves, meaning more work, sawing these down to ground level. We could go on and on, cutting and chopping and tidying, but I think we needed to take a view and be realistic, especially as it’s not our land. So, we’ve taken the clearance back to where we think is a reasonable point – and to be honest, we’ve now so much wood to chop for the woodburners, that we needed to stop or we’d have nowhere to store it. 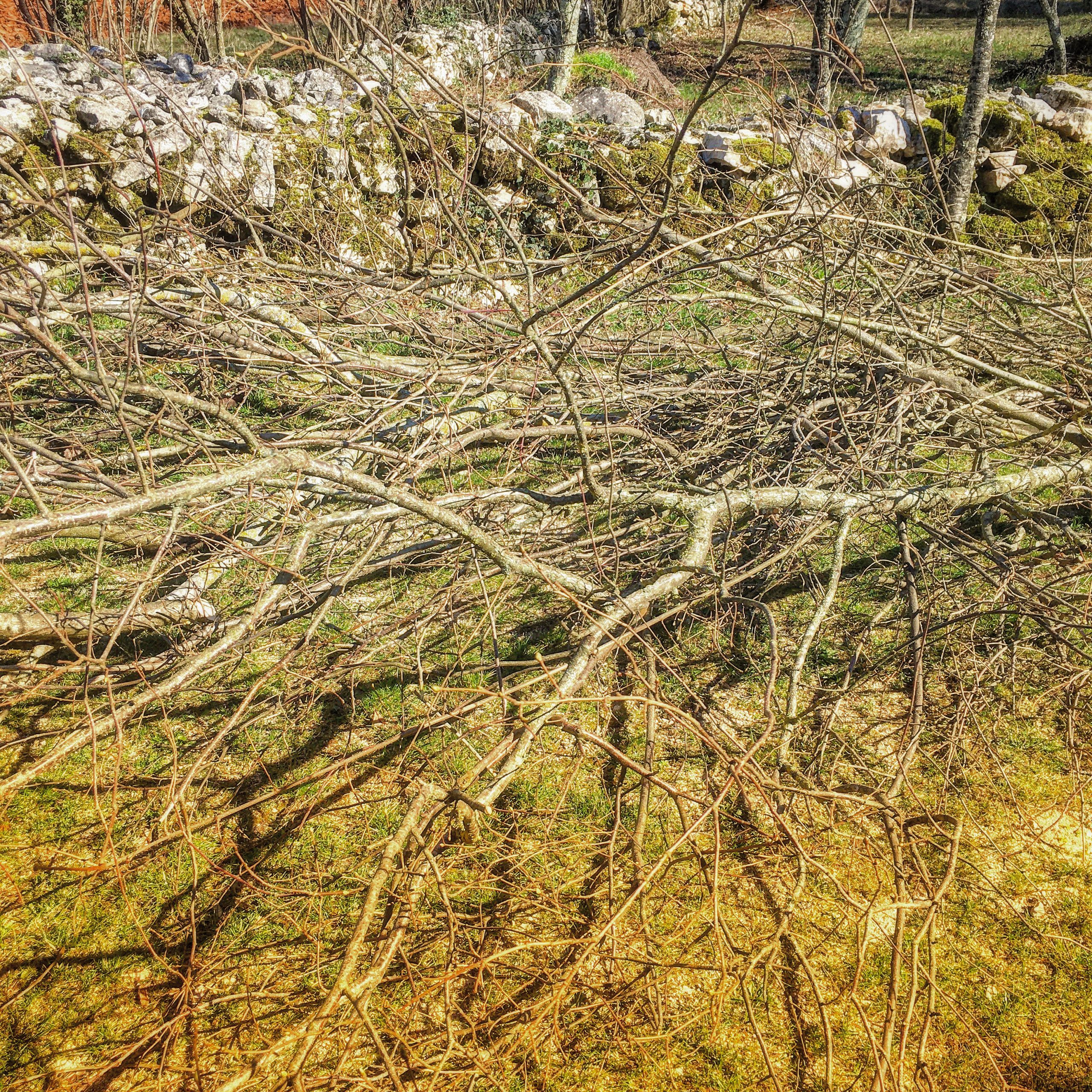 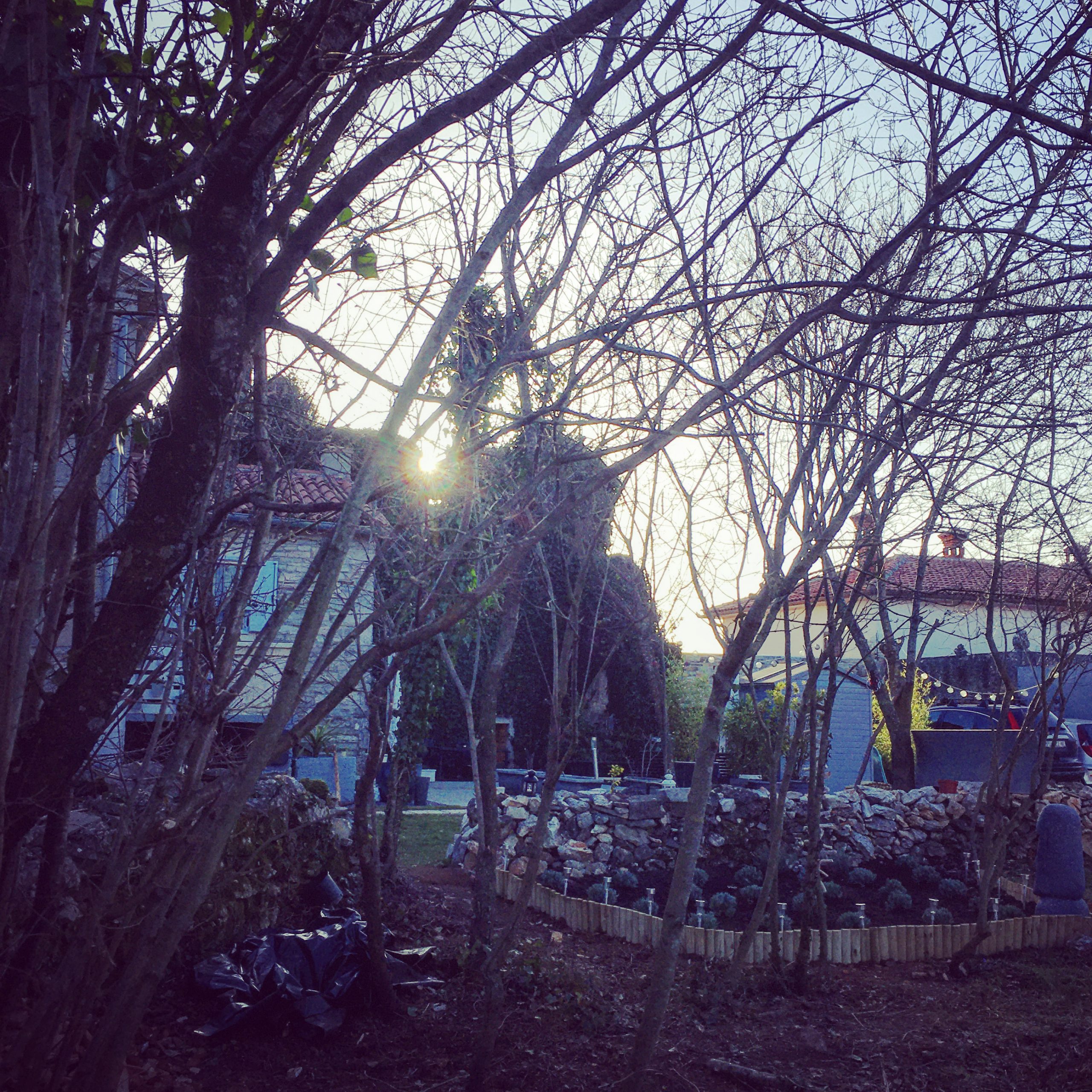 By the weekend the trees were beginning to become more defined – instead of scratty branches and growth around the base, they were now standing in clumps, with the trunks exposed. It won’t be long until the leaves are back on these trees, and hopefully the shapes will be much better too, as we’ve also done a bit of pruning and shaping here and there. You can see the ivy and vines, still twisting around the bases of the trees and which took ages, to pull up and clear. But, it had to be done, otherwise it wouldn’t be long before we were back to where we started. 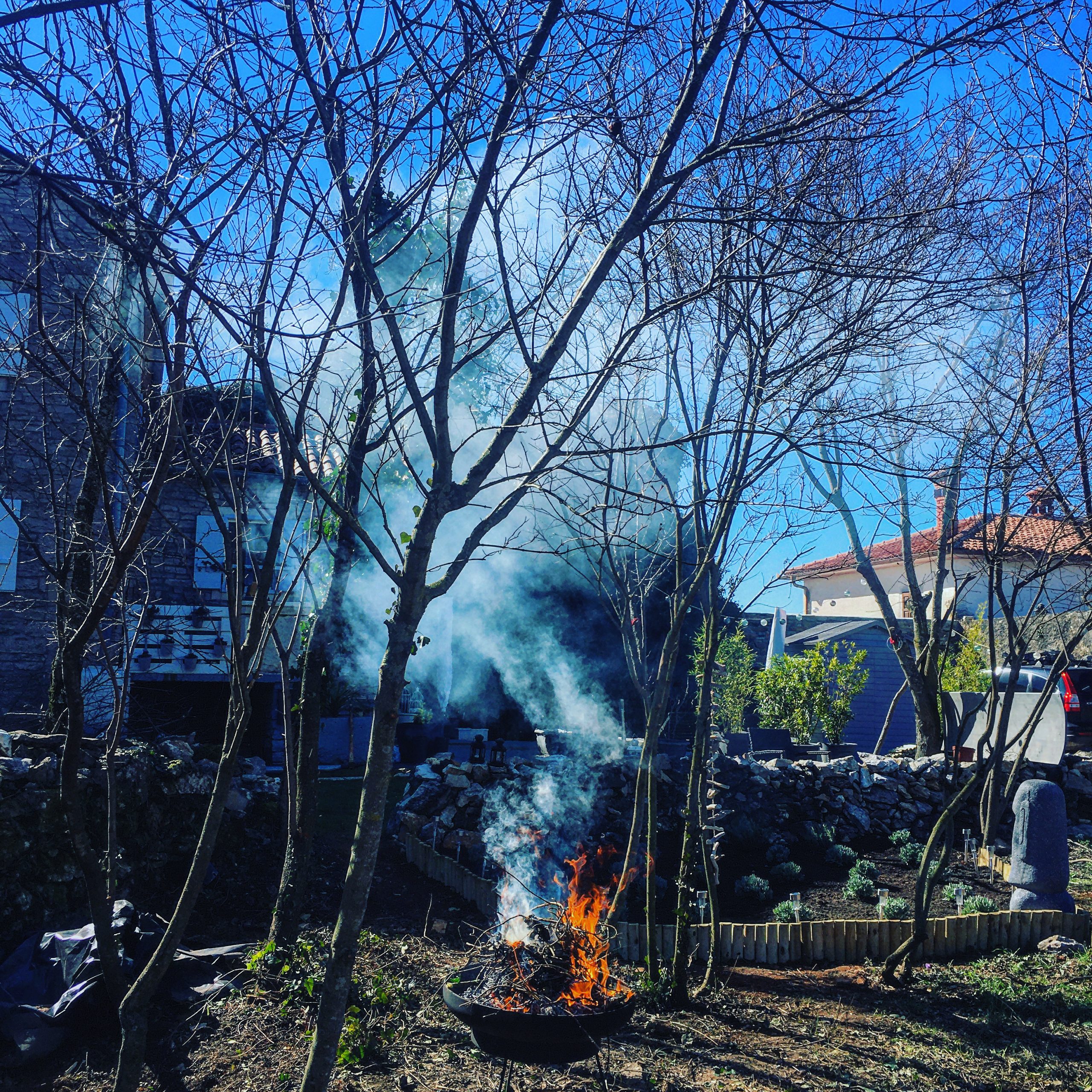 The red field will hopefully soon be planted up – we don’t know with what this year, but it always looks beautiful come the summer and so hopefully will continue to be a lovely background to our garden. These tree trunks have never been this exposed – I’d always thought we had inherited quite ugly trees, but it turns out all they needed was a bit of TLC. One of the lovely surprises we’ve had since clearing the ground, is that these hardy, wild crocuses have suddenly bloomed over the last few days. Every morning we spot more, and so hopefully we’ll have a few clumps of these until the wildflower seeds which we’re sowing today, start to emerge. Looks like that great big pile of branches and leaves and twigs has kept then warm under the soil and the spring sunlight is now sufficiently warm enough for them to push up through the soil. We’ve definitely not planted them and we’ve not previously ever noticed any colour in this patch, so hoping that our efforts are reviving them. 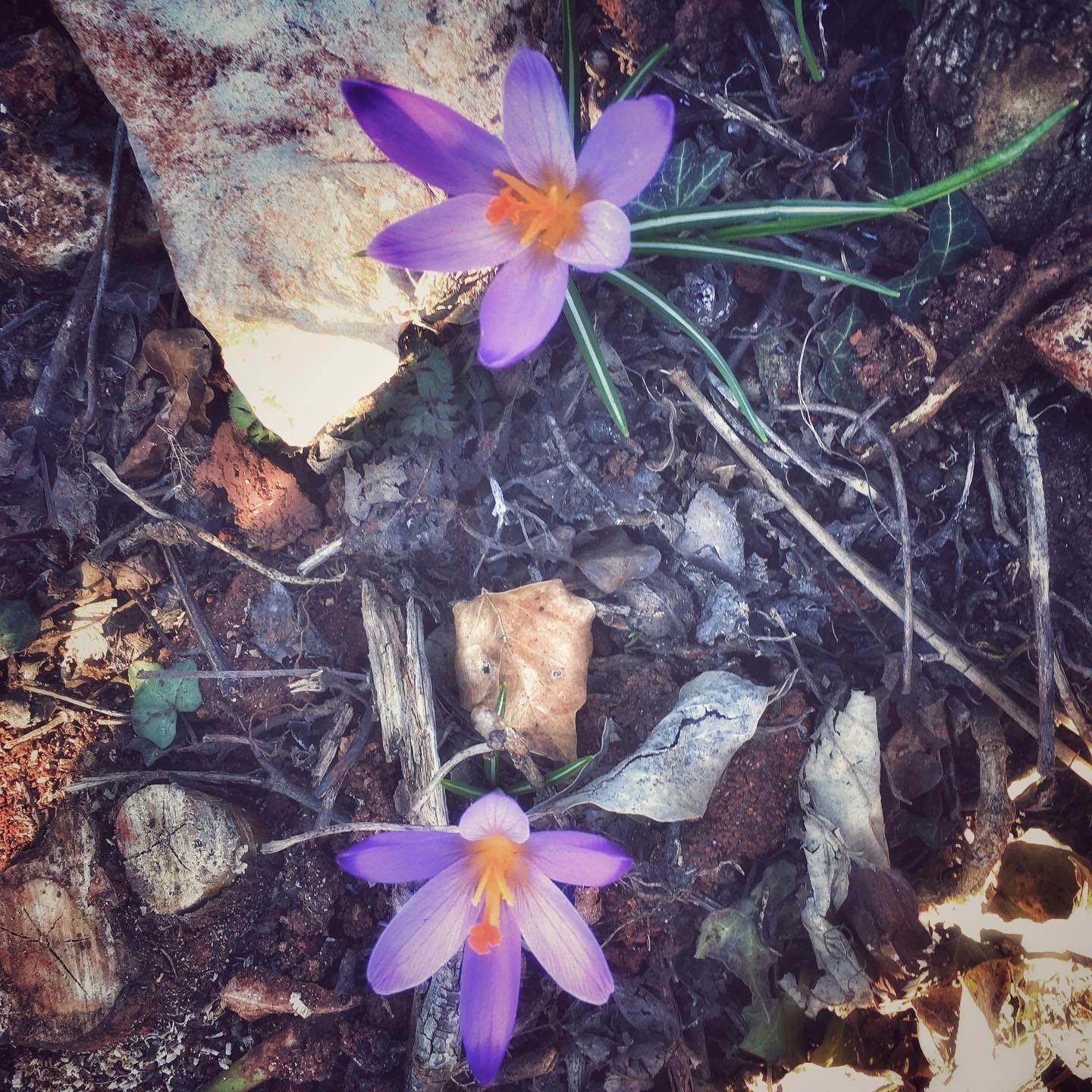 I think at times we’ve felt a bit defeated by this task. It wasn’t one that was in any way necessary, especially as it’s not even our land. But it was irritating that we looked out onto something so messy, and so we knew that we would tackle it. It’s been really hard work and seems to have taken a long time – but in reality, in just over a week, we’ve done the really hard part. It’s quite amazing looking at the first photograph above and then seeing this one, below and realising how far we’ve come. And, as we keep we reminding ourselves, it will only look better from now, as we have some gorgeous plans for it. So, onwards and upwards. We have cold snap this weekend, so the planting of the dahlia tubers will have to wait a little longer, but over today and tomorrow, the rest of the sunflower seeds are being planted and a mix of wildflowers will be sown in front of this wall above (so on the other side of the lavender). Then the big sowing in the patch we’ve cleared above. This summer, one way or another, is definitely going to be a riot of colour in our garden and around it. 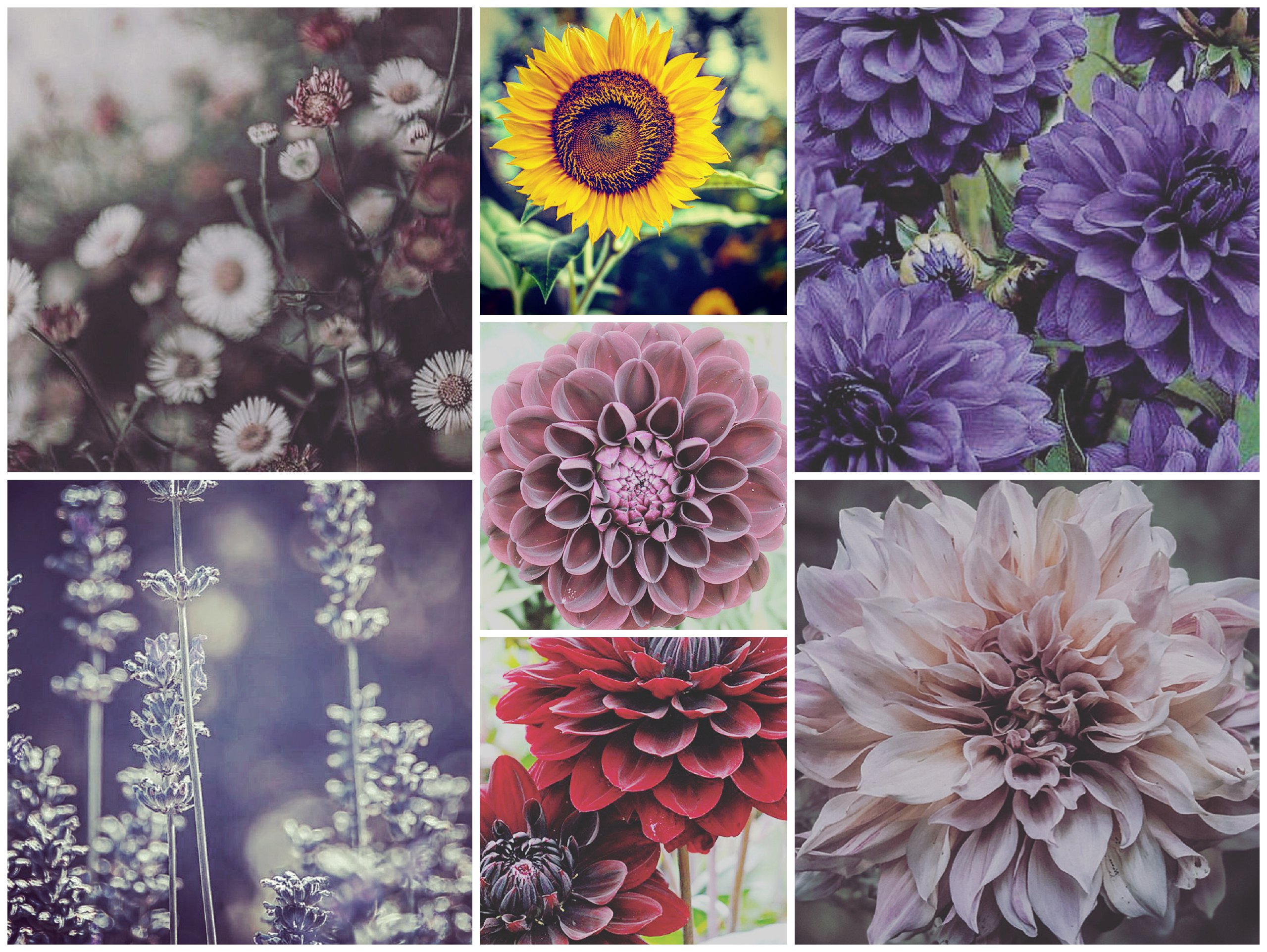