To the front of the house, we have an area which is mix of concrete paving and grass. The grassed area, in particular, is a bit of a mess, as it’s where we currently park the cars. We’ve used bamboo plants to screen the garden as much as possible from the road – although to be honest, it’s not a busy road and so being overlooked isn’t a huge problem.

Our boundaries are currently being established legally, and once we get the plans back, finally showing where our boundaries are, we’re going to have a wall built, which will afford us more privacy and enable us to begin really sorting the front of the house. Most houses here use Istrian stone for walls but our whole house is stone and we want something that marks our house out as a little bit different. We love living in Istria and feel very lucky to be able to do so, but we’re not Istrian and so want to stamp a little bit more individuality on our new wall. Current thinking is a concrete construction, which will be rendered and painted – but with some little twists.

We have a lot more space around this house than anything we’ve ever had before. There is a communal right of way that runs alongside the house, although it’s very rarely used by anyone, apart from the local farmer who sometimes drives his tractor through. A small dry stone wall then separates the right of way from another communal strip of land which runs alongside the farmer’s field. This wall has never been looked after and so up until now has been covered in creeping ivy and moss, and stones regularly dislodge. Behind the wall, at the edge of the communal strip of land is a little copse – beautiful in the summer as the full growth hides all the dead wood and broken branches, but at this time of year, still a bit of a mess. So, in preparation for the big garden work, we’ve decided to take a bit of action, and by stealth, are tidying up this area… 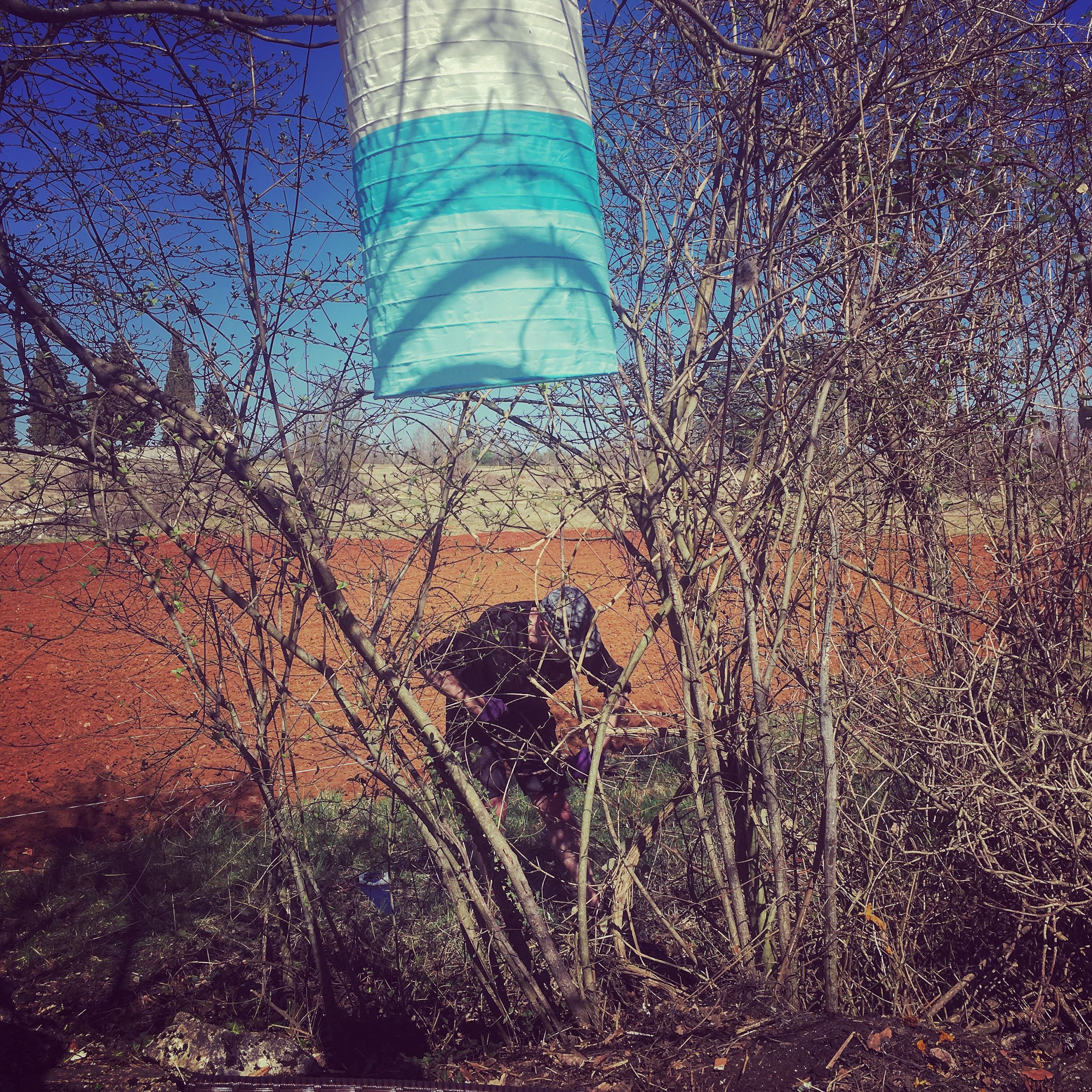 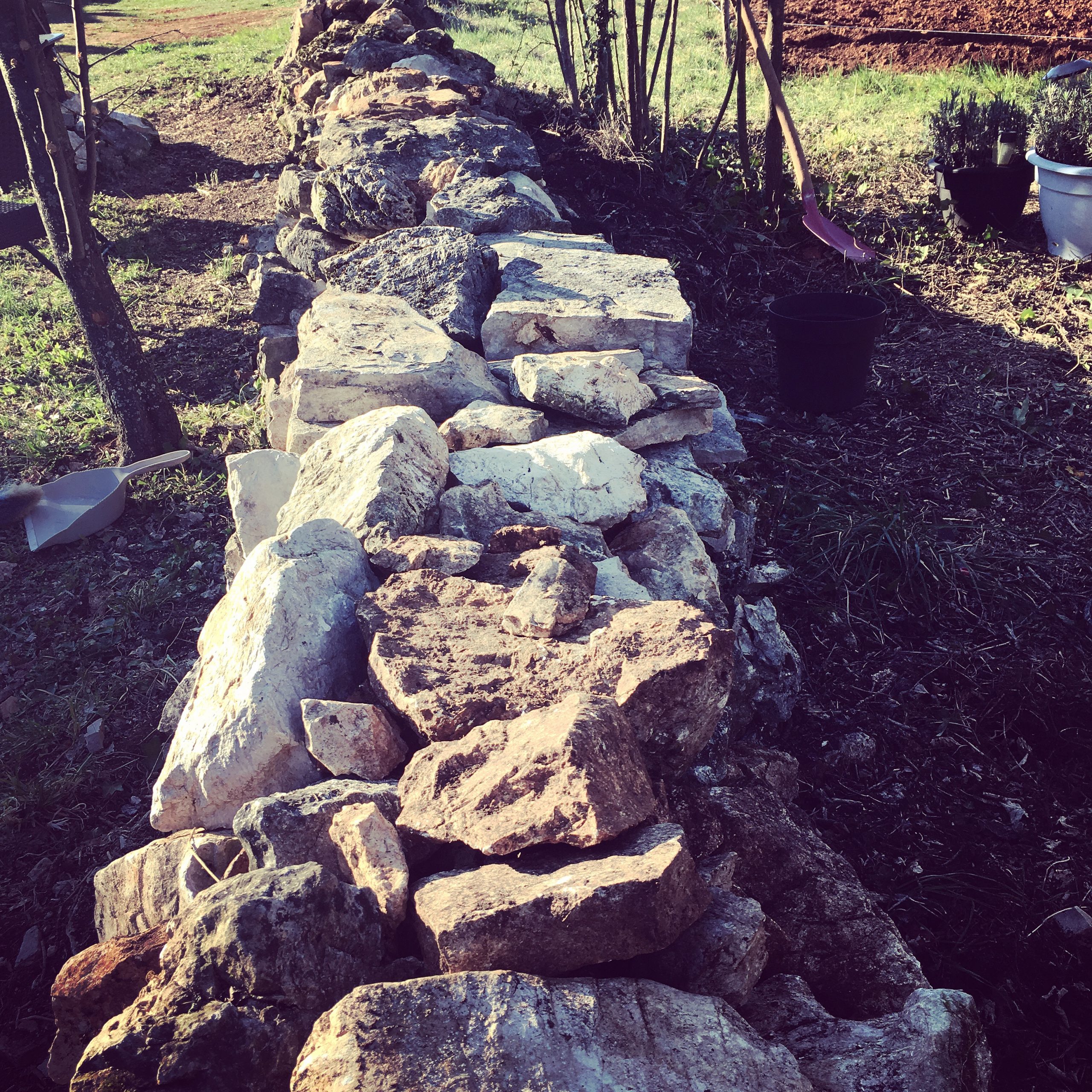 Stone by stone, the wall is being rebuilt and made secure. Who knew we’d be turning our hands to dry stone walling?

As ivy and moss have been growing in the wall, we’ve decided to try and prettify it a bit and we’ve started to plant up alpine plants. It’s all a bit of an experiment, but fingers crossed, these will grow and flourish. 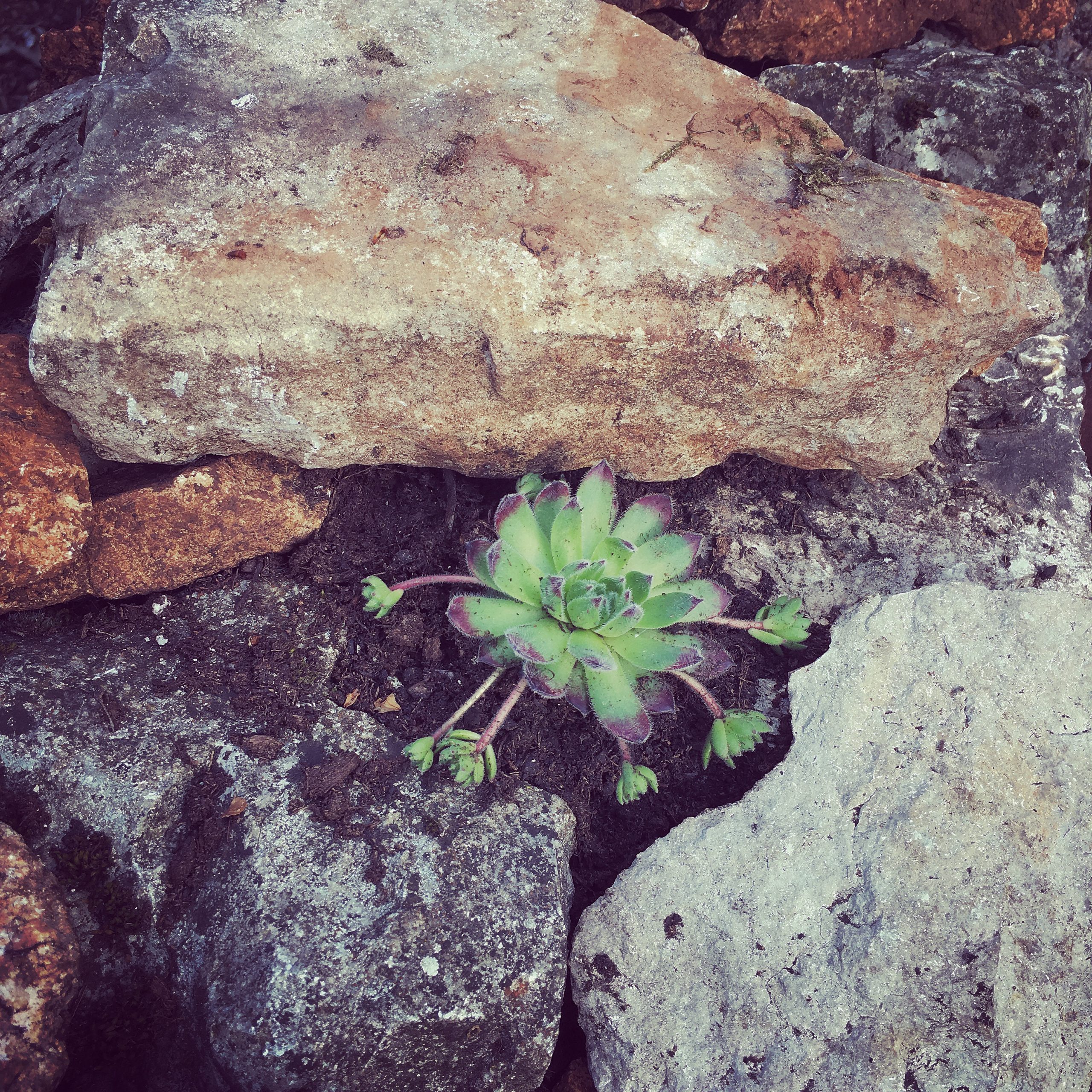 Left over from building work, we also had five, quite short, railway type sleepers which are really quite lovely – and we’ve decided to utilise these to create a bed, planted up with lavender and wild flowers. Again, we’ll have to wait and see if we can nurture these, but I have high hopes! In the corner of this raised bed, we’ve also found a home for the chimney stack which was removed from our West Didsbury roof when we had our woodburner fitted, and which has followed us to Istria. Even though we’ve pulled up all of the rambling ivy, the plan is to pot up some tumbling ivy which we hope will grown down the stack. 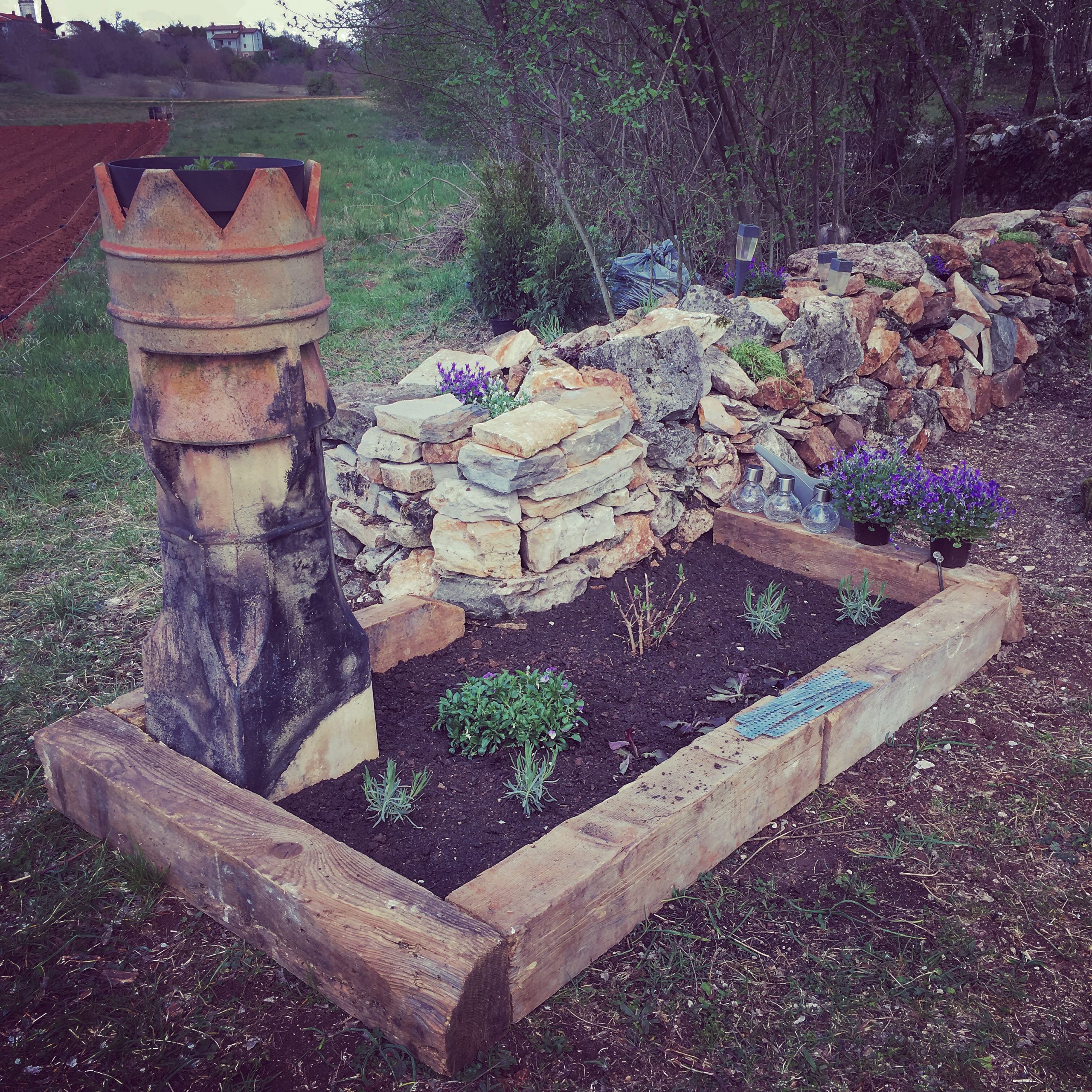 Because so much deadwood has been cleared, we’ve exposed ourselves a little bit more, so have have three dwarf conifers which will eventually be planted in the soil, once we can work out the best position for them – in the meantime, they’ll have to get used to large pots. And, when all is done and cleared, the beautiful French vintage wrought iron table and chairs will have a new home in the copse – it gets sun all day, so we’re liking the idea of being to have breakfast out here. But first, the set needs to be renovated as it’s very old and very rusty in places, with peeling paint. It’ll be a tricky job, but one we think will be well worth it… 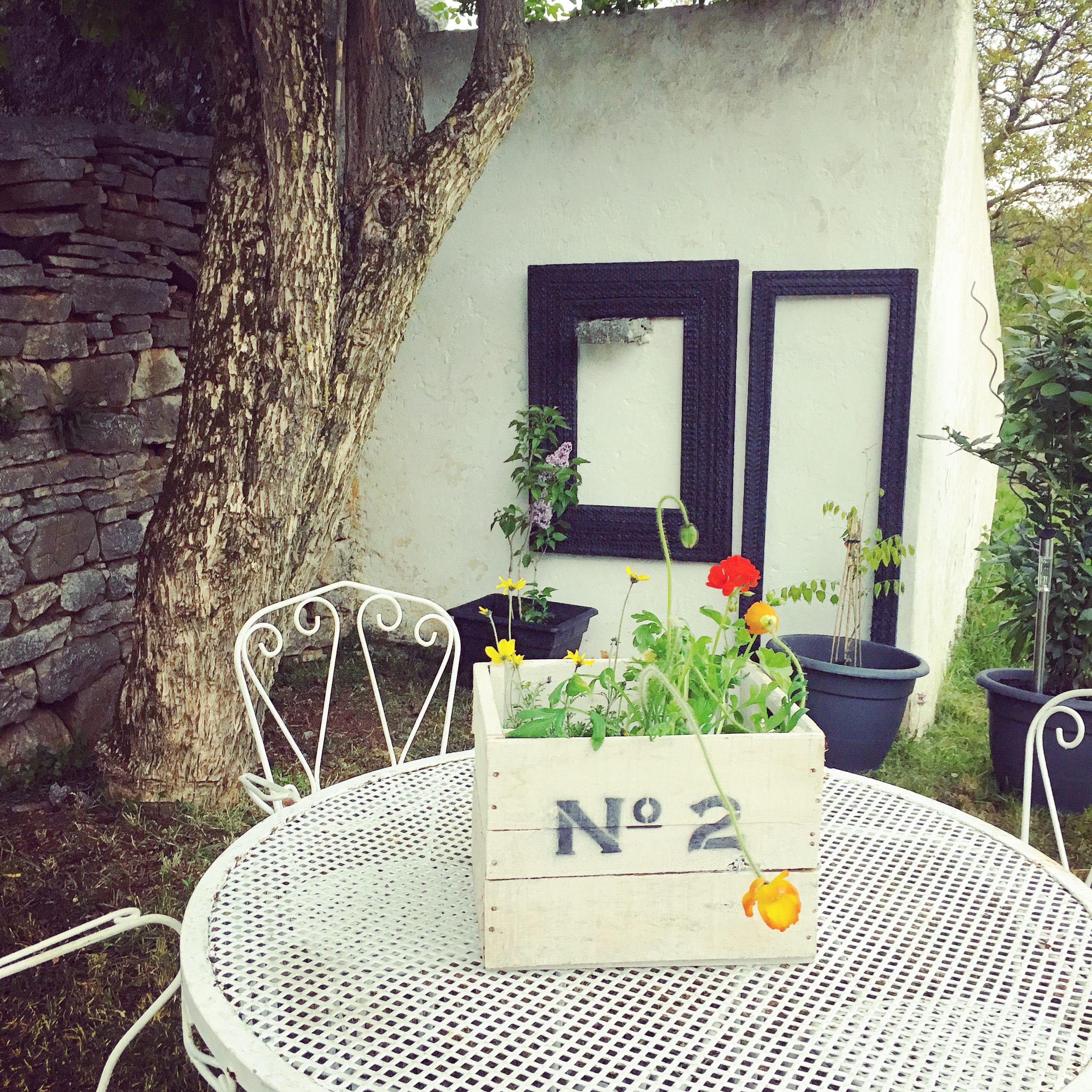