I’ve been sorting through hundreds and hundreds of online photos, from when we first viewed what was to become our home in Istria to now. To a couple of days ago, when weather stopped DIY play in the garden. We’ve been sorting because, as we have now decided to sell the house, we wanted to reflect on how far we’ve come. And boy, just house-wise, we’ve come a LONG way!

We’re not interior designers and we’re definitely not builders. We knew absolutely no-one when we landed here. Although we had recently renovated our house in West Didsbury, we had not a clue how to begin renovating a very different style of house in a completely new and unfamiliar country. But, needs must – and we realised pretty quickly that it we wanted some creature comforts around us, we just had to work it out. Looking at these before & afters, from around the house, we feel pretty proud of ourselves because we think we did work it out…

So called, because now, in the winter, it is so snug and cosy. But, as you can see, it wasn’t quite so snug when we moved in. This room is under the living room and was partially decorated – a couple of the walls had been plastered and painted but it was mostly in a very unfinished state, The stairs down into it were very precarious, to say the least. But – and this was a real positive – it was dry. Not a sign of damp, we knew we could make something of it. The installation of our Dovre woodburner (and new internal chimney) has made a huge difference to this room – especially on colder days. And, only very recently, we found out that this room used to be where the cattle were housed. Where the chimney is now, there used to be a huge arch with double doors, with a ramp leading in front of the garden area. The stairs weren’t there and it wasn’t open, up into the rest of the house. I wonder what the cows would make of it now? 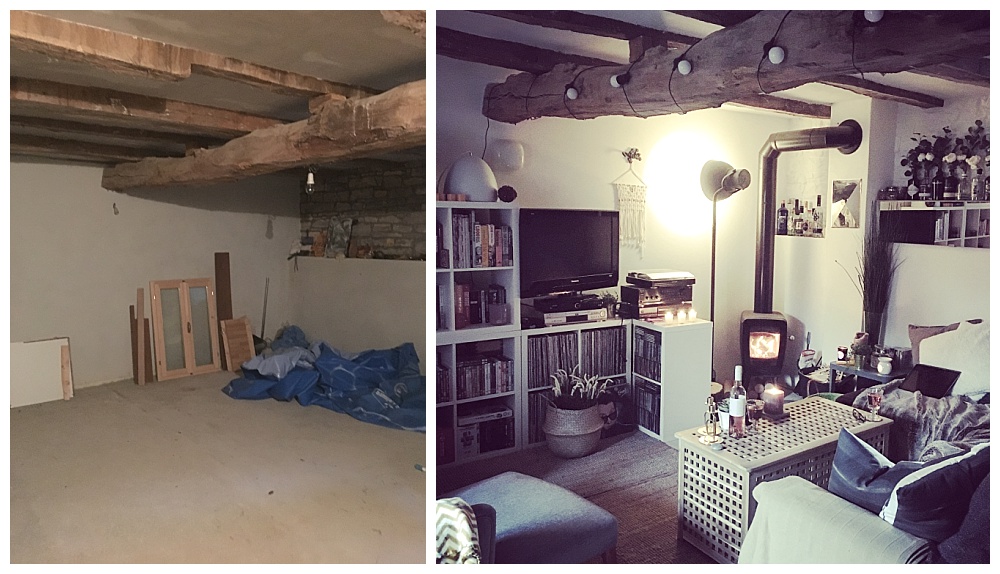 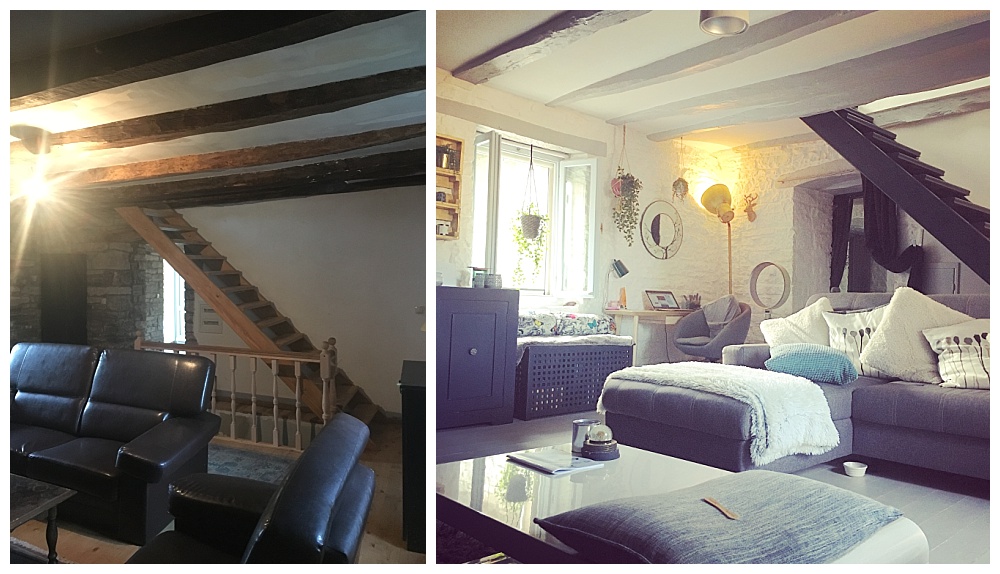 The living room very dark, with much exposed stonework and even though it’s a large room, it felt claustrophobic. The dark furniture which we inherited, didn’t help. One of the first decisions we made was to get rid of all of the furniture -ours was on its way from Manchester – and to paint all of the walls and ceiling brilliant white, and the woodwork, a very soft pale blue. The pine floorboards were also painted, which really lifted the room. Eventually the wall opposite the grey sofa above was painted a deep, rich navy blue, as were the stairs, but we think we’ve still retained a feeling of space and lightness in this room.

Oh, my word. The kitchen! Although it was probably the most “complete” room in the house, it was also the one we wanted to tackle first.The units were ill-fitting, the floor tiles definitely not to our taste and the one window (to the right hand side) also poorly fitted – it wouldn’t open because the sink tap was in the way… This room had to be dealt with by the professionals – we had the kitchen designed and fitted by a company in Slovenia, and all the building/electrical work done by a small of team people we’ve got to know. *Networking* – absolutely key to build up a trusted group of people. Everything was ripped out of the kitchen, including that low, false ceiling, to reveal the original beams. New lighting was installed and new plumbing to accommodate the sink being moved to below the new window we had fitted. The room isn’t the largest, but we’ve accommodated everything we need, including a lovely new breakfast bar with integrated hob on the other side. Perfect for perching with a vino, while the other cooks 😉 Underfloor heating, new flooring and accent lighting finishes off the room, which we painted completely in Farrow & Ball Hague Blue. (We couldn’t squeeze in our condenser tumble dryer, but this is accommodated under the stairs down in The Snug, behind floor length curtains, and our old fridge freezer is in the outside cellar as an overspill). 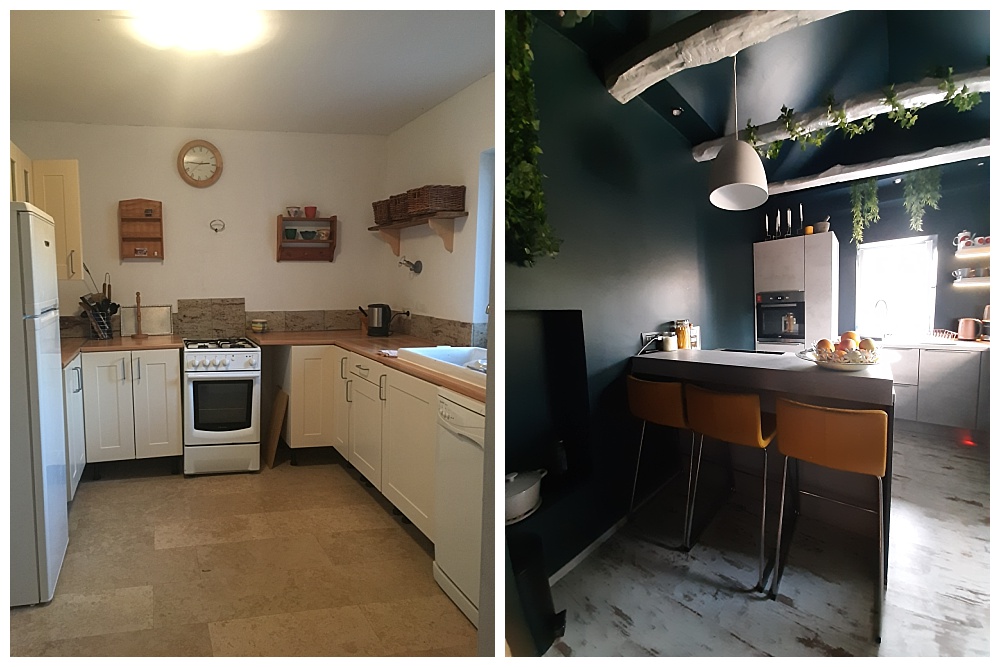 Now, this was a curious room. The front door opens straight into this room and when we bought the house, it was a bit like an outdoor space, but indoors. The walls were exposed stone, the beams were rough and ready and the floor was big slabs of cold, Istrian stone. Plus, slap bang in the middle of the room, therefore making it completely unworkable as a space, was a stone well, with a big metal bucket, suspended by a chain and pulley, sitting on top of it, and used for drawing water. Yes, when the lid was lifted it was apparent that this was still potentially a working well, as it was full of water. 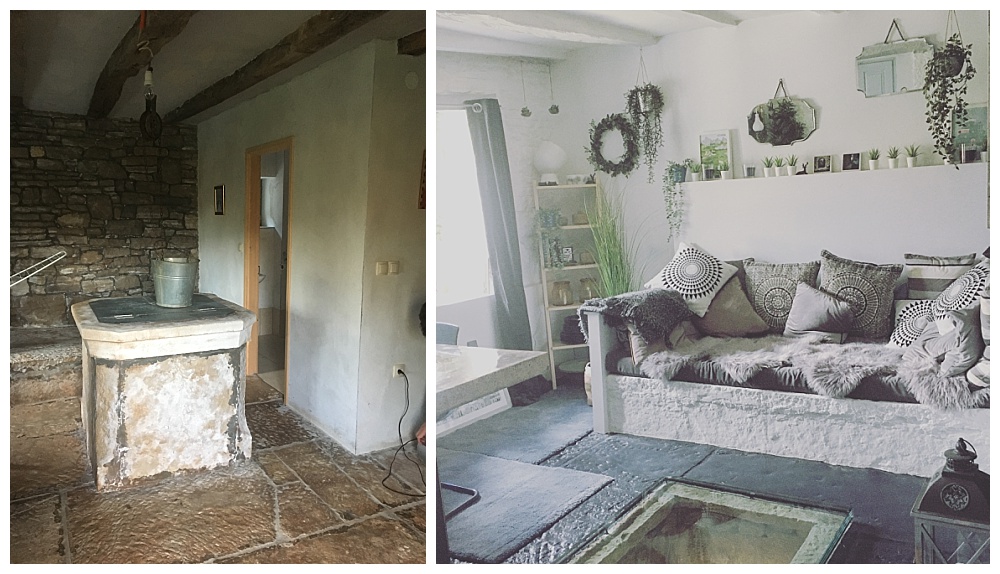 A big stone platform, against the rear wall, completed the cold, outside feeling of the room. The door to the right, led into a very dingy downstairs bathroom – meaning that all in all, this room wasn’t creating the best impression as the entrance to our new home. Things have been done gradually in this room, because of necessity it has been a makeshift kitchen, a storeroom, a work room and a place for dumping various builders’ tools and pieces of machinery. But we’ve reclaimed it and are delighted what we’ve achieved : 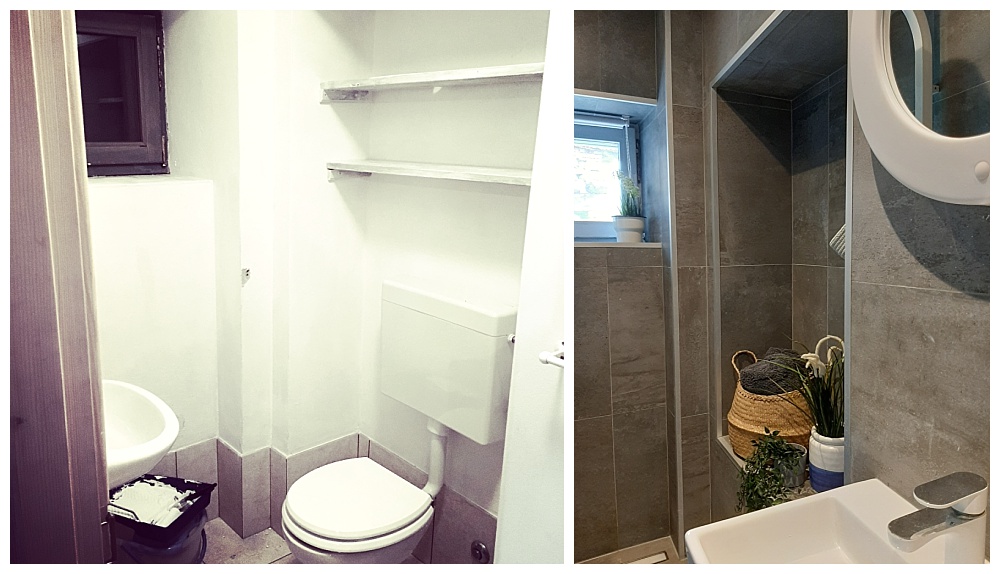 As soon as a we moved in, this little room was immediately whitewashed, as it was straight off the Well Room and we just needed it be brightened up and looking a bit, well – cleaner. But, as with all of the rooms in the house, there was only so long we could live with it. Unsurprisingly, for a house which was not used very often, the sanitary ware wasn’t the sturdiest or the prettiest, the shower cubicle was quite frankly, horrible, and the room was poorly laid out. As in, a cheapo toilet, visible to all when the door was opened. A complete no-no, in my book! So, as with the kitchen (and, perhaps with hindsight, stupidly, at the same time) the downstairs bathroom was smashed out and reconfigured with new sanitary ware. A wall-mounted toilet was moved to where the shower cubicle used to be, therefore completely private. With underfloor heating and big concrete tiles, a wet room was created, meaning that without a cubicle, we created a sense of much more space. Much, much more pleasant a showering experience! 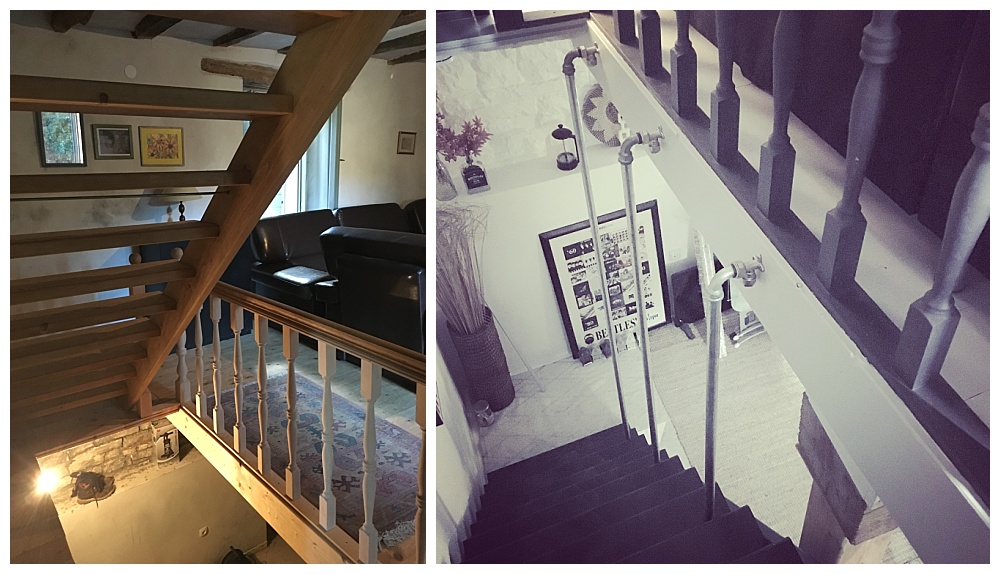 The stairs down in to The Snug and up to the first floor, and spindles and handrail (there was nothing going down into The Snug – health & safety alert!), and floorboards, were not of the best quality pine. And not fitted very well, either. However, over time, we’ve addressed all of this. The treads on the stairs were pulled forward and all secured, with a back attached to each flight, so now you don’t see through the treads. They’ve been painted in a deep navy blue, as have the floorboards and the handrails and spindles. Industrial piping and fixtures have been used to create grabrails going down into The Snug – we scratched our heads for along time trying to work out a safe solution here. The angle was difficult, butu we think we’ve found a super stylish – and unique solution! 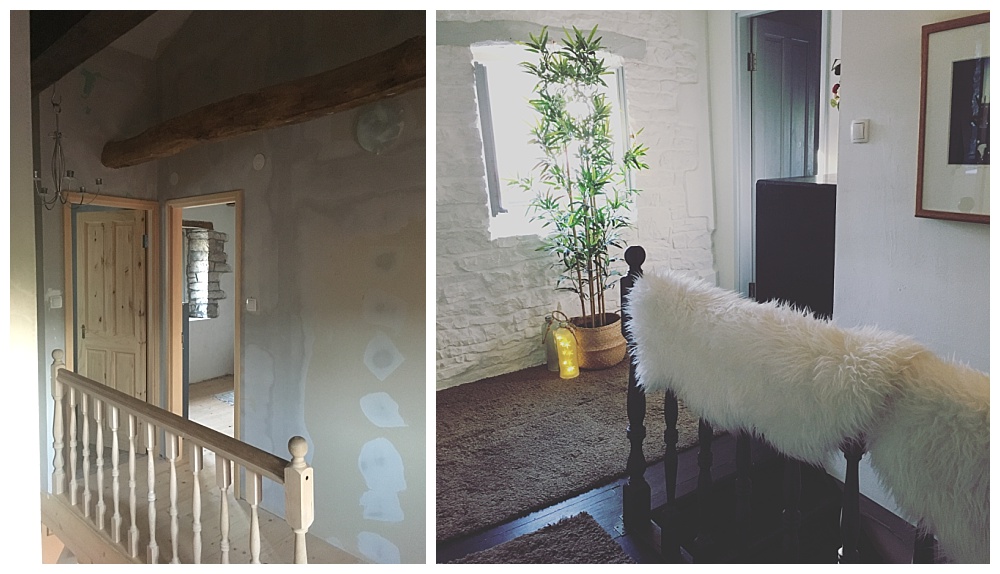 All walls and the apex ceiling are painted white, and we’ve finally sorted the exposed beams, which are now also white. The upstairs doors are on our “to replace” list, but we’ve just not had the chance yet, so they are painted the same soft baby blue as the windows and shutters.

If I’m honest, I’m hard pressed to say which is my favourite room. It depends on the time of day, season, whether it’s hot or chilly. But, I’d say this bedroom was a contender. When we buying the house, this room was almost a game-changer. We came out to see it with the couple who were selling, and we stayed overnight in this room. Because no-one had been in the house for over a year, nature had taken over, and this room was clearly home to one of the biggest spiders I have ever seen in my life. It seriously gave me the heebie-jeebies and after being convinced that a spider could not possibly be a good enough reason for pulling put of buying our dream home in the sun, I vowed that this room would be spectacular, to banish the memory of our eight legged visitor. 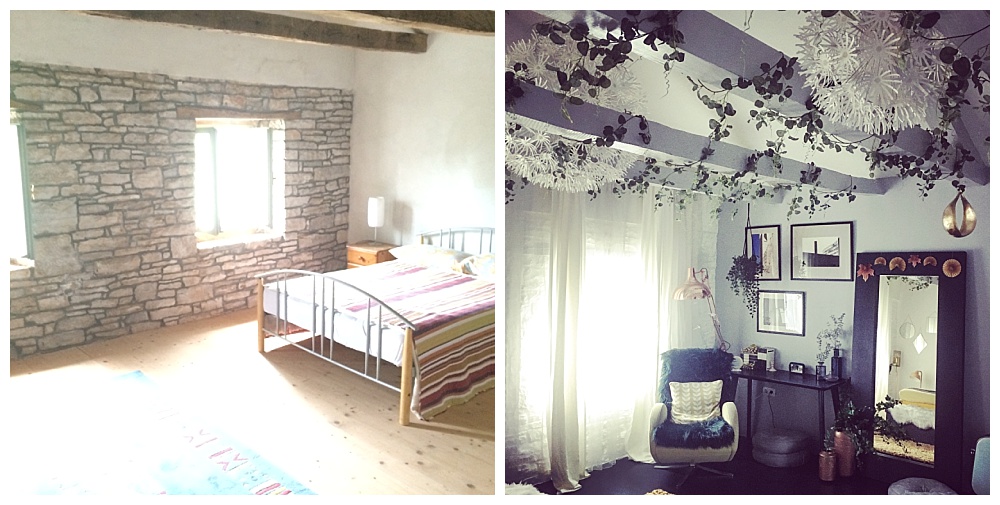 I think we’ve achieved a spectacular room. It may not be to everyone’s taste, but we LOVE it. It’s huge, with a soaring apex ceiling and two windows with amazing views across fields and an orchard, up to the village. It’s painted completely white, with floor length curtains, which we never need to close as we have complete privacy. 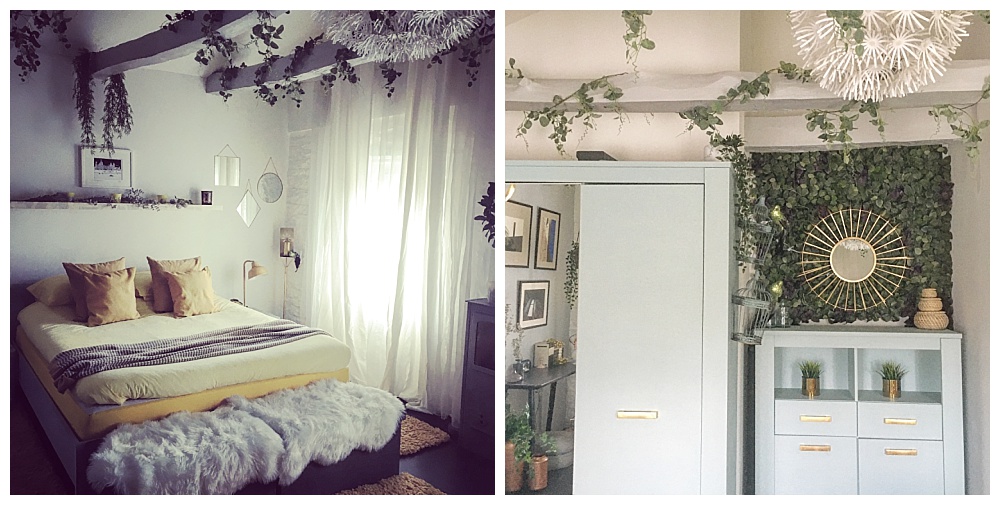 From an unpainted room, with bare pine floorboards and two sets of bunk beds, we tackled this bedroom first, as the big bedroom, in the early days, was full of packing boxes. White walls, white ceiling, pale grey beams and very soft pale blue blue woodwork, coupled with a navy blue wooden floor transformed it. As this is primarily a guest bedroom – although we do tend to move into here in the winter, as it has the internal chimney from the woodburners below and is so cosy – we decided to glitz it up a bit with gold spray paint… 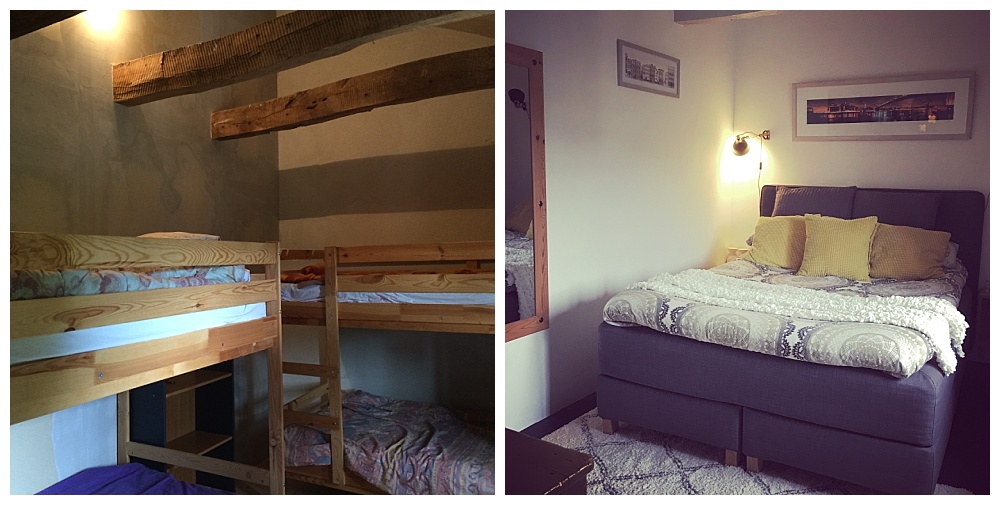 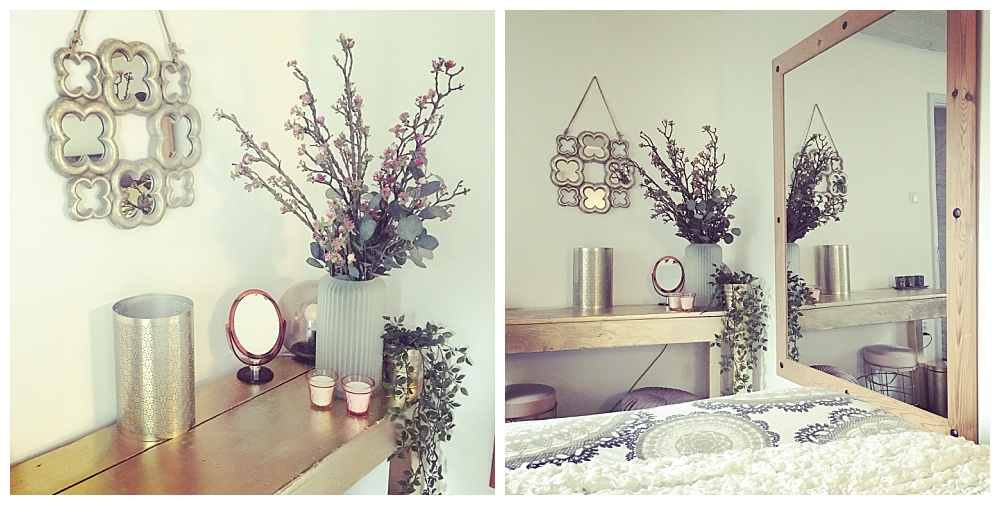 Same story as Bedroom Two – a bit of a sorry room, this time with a sad looking single bed. For this room, we bought two new single beds, which are usually joined as a double, but give us flexibility for visitors. The walls, ceiling, woodwork, beams and floor were painted the same as the other bedrooms and voila… A whole new room! 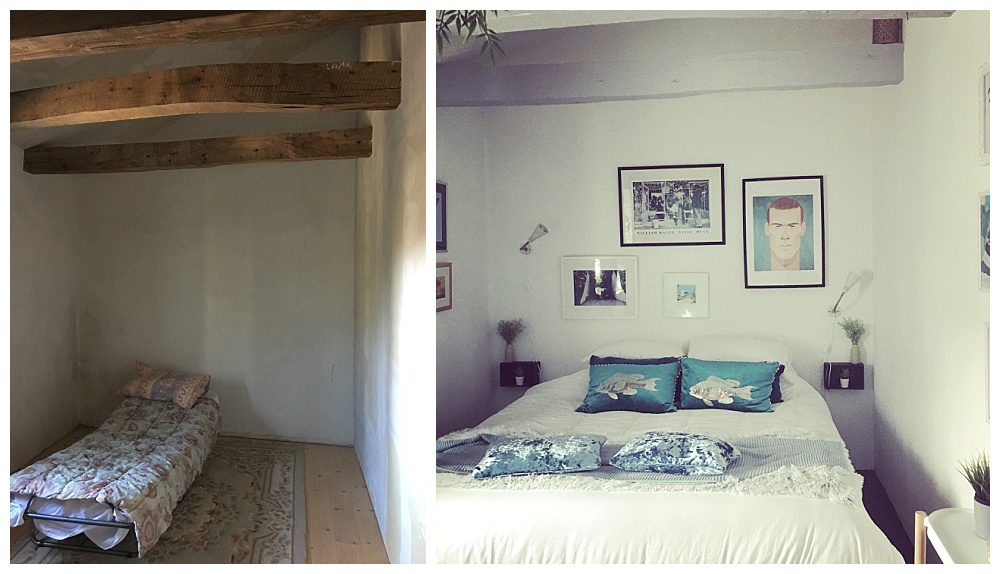 A full rip-out was again all we could really do with this room. While everything else was being renovated, we limped along with this bathroom, but the bath was so small, it was impossible to actually have a bath. This has now been sprayed black and is in the garden, planted up with three blooming honeysuckle climbers – *that* is how small it was 😉 A full size bath has now been fitted with a gorgeous new square ceramic sink and matte white and silver taps. Like the rest of the house, it has been transformed with white walls, pale grey beams and navy wooden floor. A new boiler, with an increased capacity, makes bathing an absolute joy. 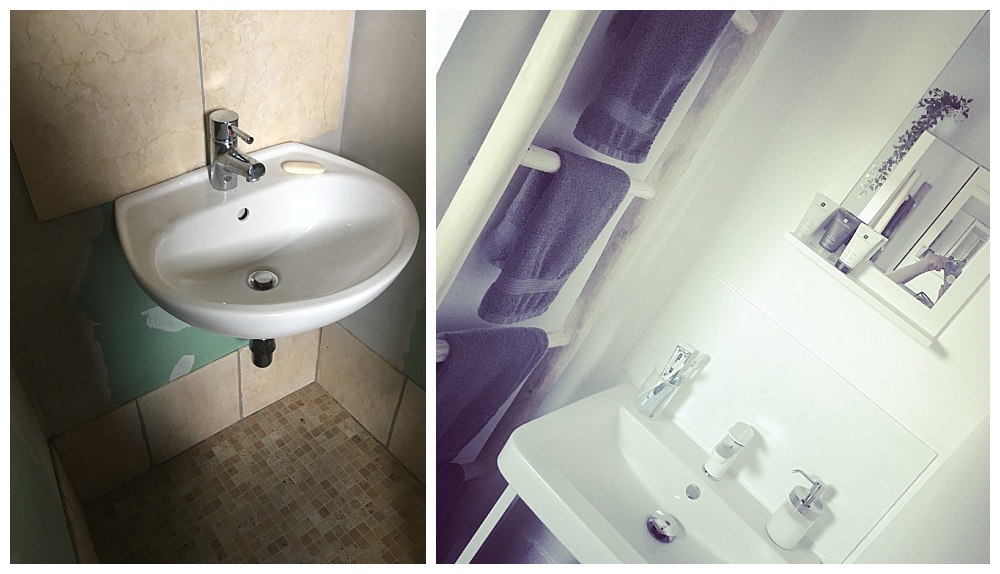 It’s been a long journey and it’s been bloody hard work – even given that the big jobs have been done by the professionals. But, we want to live in a home that is cosy and comfortable and has an element of style and individuality. We think we’ve done it – and now cannot wait to get going again!

If you are interested in finding out more about about our property, drop an email to helen@escapetoistria.com