The Start of Something New

2020, as everyone knows, was a pretty unbelievable year, all round. If someone had told me the following, in January 2020, I’d have thought they were daft:

All of these points sound incredibly mad, but perhaps the last one, most of all, because yes folks, in the middle of a global pandemic we did actually embark on a house sale and purchase. When we viewed the property which will become our next renovation, it was when the world was “normal” and the viewing (and subsequent ones) set us off on a path it was hard to get off. This new property was potentially everything we had ever wanted – it had a view, it was near amenities, it was where friends lived, it was huge, it would enable us to have proper open plan living, and it was affordable. And all things considered, meant that we decided to sell up and go for it. Then the pandemic took hold.

To cut a long story short, our house is still on the market because interested potential buyers cannot easily travel to view the property and with COVID, we don’t feel it is appropriate to be doing viewings anyway. However, the guy who owned the property did want to sell it to us and so the upshot is, we are leasing it until our house sells. We have a contract in place, which allows us to begin doing work to the property – we could renovate it fully, if we wanted to, but until ours sells, we won’t be able to go at it hammer & tongs, as we need to free up the capital. However, with a strong contract in place, which was thrashed out between solicitors, we feel in a very fortunate position. We still have our warm, cosy, renovated property to return to but can begin the initial clearing of the new property. 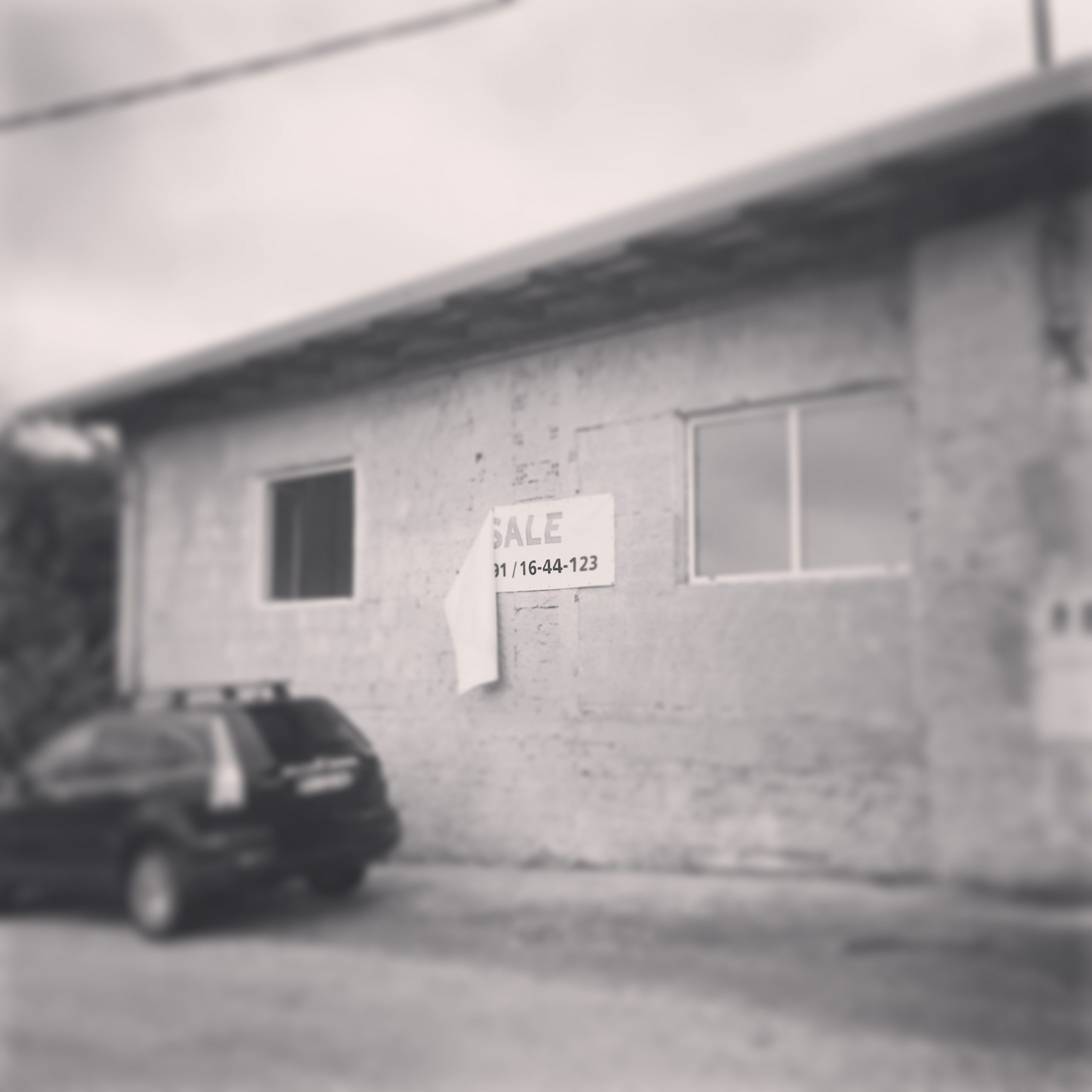 It was, quite a long time ago, a commercial unit, where a printing business operated – hence the name we’ve chosen for it. The Printworks. It had been up for sale for quite a long and was full of machinery and the mess of a long abandoned business, but fortunately for us, the vendor agreed to clear it before we signed the documents. Pre-signing, this was what it looked like… 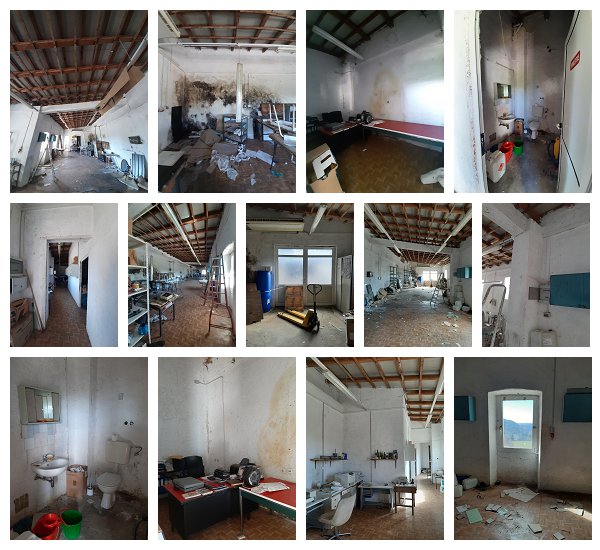 I know. Just. Awful! But, after having imagined for so long how it could eventually look, we were able see beyond and through the horror show and we weren’t daunted by the project that lay ahead. Having already renovated a property in Istria, albeit not on this scale, we also felt we were in a much stronger position than we had been four years ago, when we knew nothing and no-one. So, we said good-bye to 2020 with leases and pre-contracts signed, and got the keys to the property. A nice way to end a not-so-nice year.

The property is on one level and is kind of rectangular in shape. Although we have a very clear idea about what we want it to eventually look like, we will be involving architects as we want to ensure that we can actually do what we want to do – and to take their professional advice. We are working to a strict budget at the moment, and so we are doing as much of the preparatory work as possible, ourselves. Where we can remove walls, we’re removing them ourselves, and this is what has been the main focus recently. Two small rooms were divided by a wall which didn’t go all the way to the ceiling, so it was pretty obvious this wasn’t a supporting wall and this has now been knocked down and the larger space we have now opened up will eventually become one of three en-suite bedrooms. 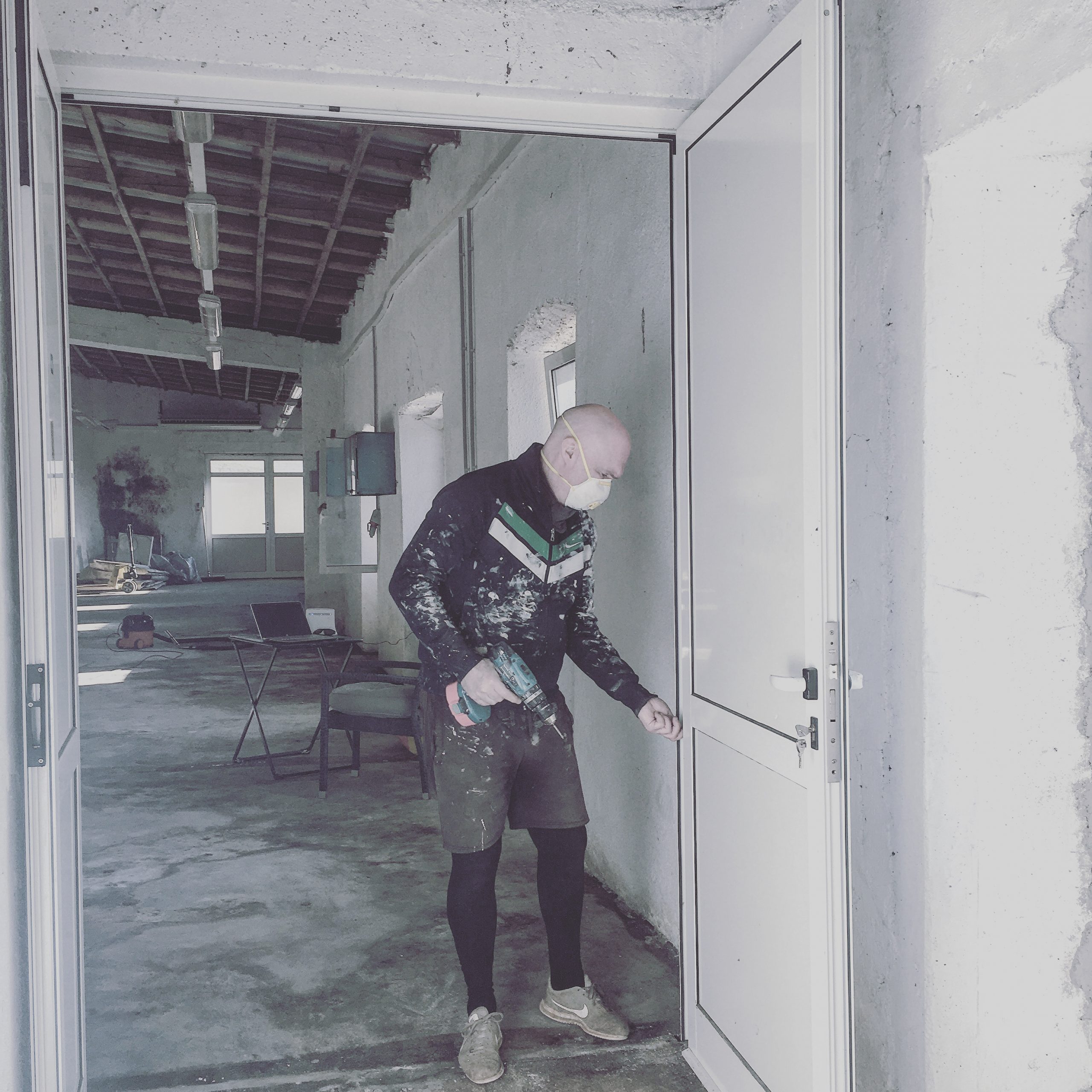 The first task was to rip up the mock parquet linoleum and remove the main internal UPVC doors and frames so that we could begin to assess the space we were starting to play with. The lino came up pleasingly easily and we were very relieved to find solid concrete floors underneath. Hopefully, a starting point for the eventual laying of underfloor heating – and if not, at least we won’t be worrying about wrecking wooden floors as the work progresses. 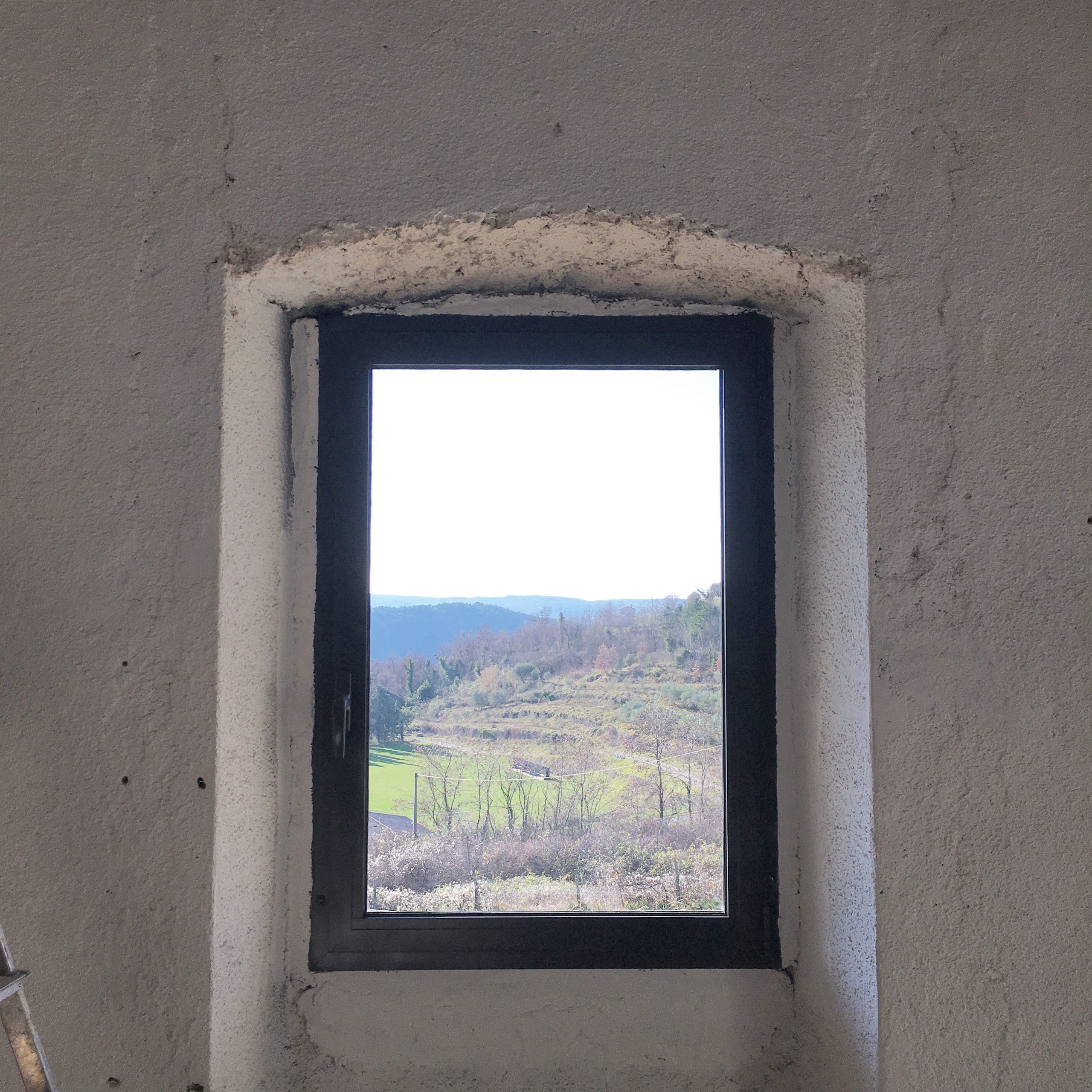 All of the UPVC frames are white and are all actually in really good condition. However, all of the windows are at the front of the house and to maximise on light and space, we think that most of the windows (and certainly the ones in the three bedrooms) will be widened and sliding glass doors fitted. However, we wanted to see what the frames would be like in an anthracite colour and so did a quick spray paint job, touching up the walls around in white to see the contrast. What an immediate difference! The darker frame, quite literally, framed the view and there and then the decision was made – whatever the windows were going to be like, the frames were going to be dark. I cannot wait for the summer when everything is vibrant green outside and we’ll see for definite what inky frames will look like.

So, this week’s demolition has involved knocking down the partition wall between the two small rooms, to begin creating a larger space, which will hopefully become one of three (simple) ensuite bathrooms. As I said earlier, we knew we were OK with demolishing this wall as it didn’t go to the ceiling. Despite one of the rooms having a toilet in it… 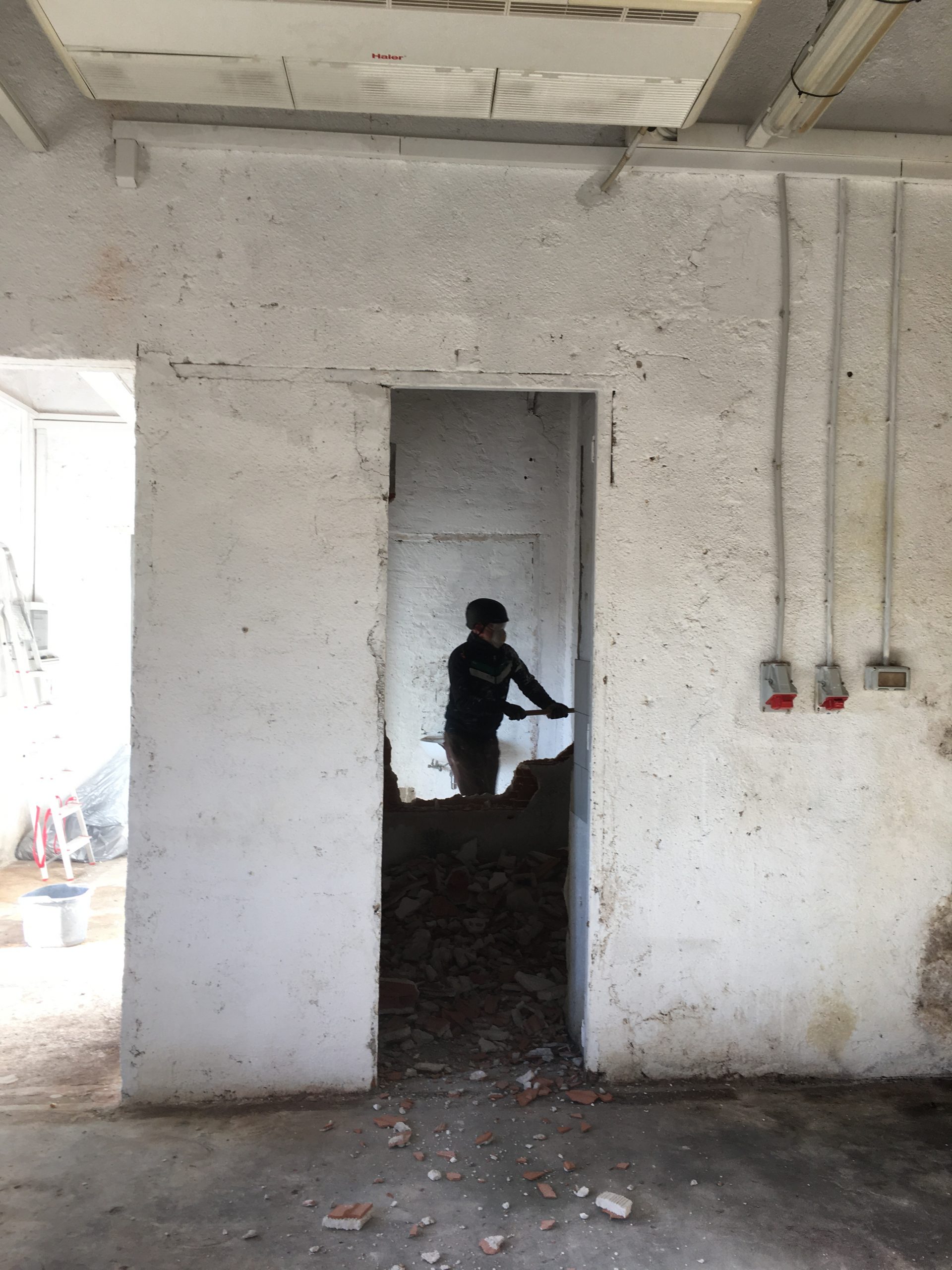 Today, this wall was finally down – it’s been a bit too chilly to work on the house recently. And, to be honest, we’d have been mad to leave a fully renovated, fully working and very warm house to work on our new project. However, the sun returned today and the wall was dealt with… 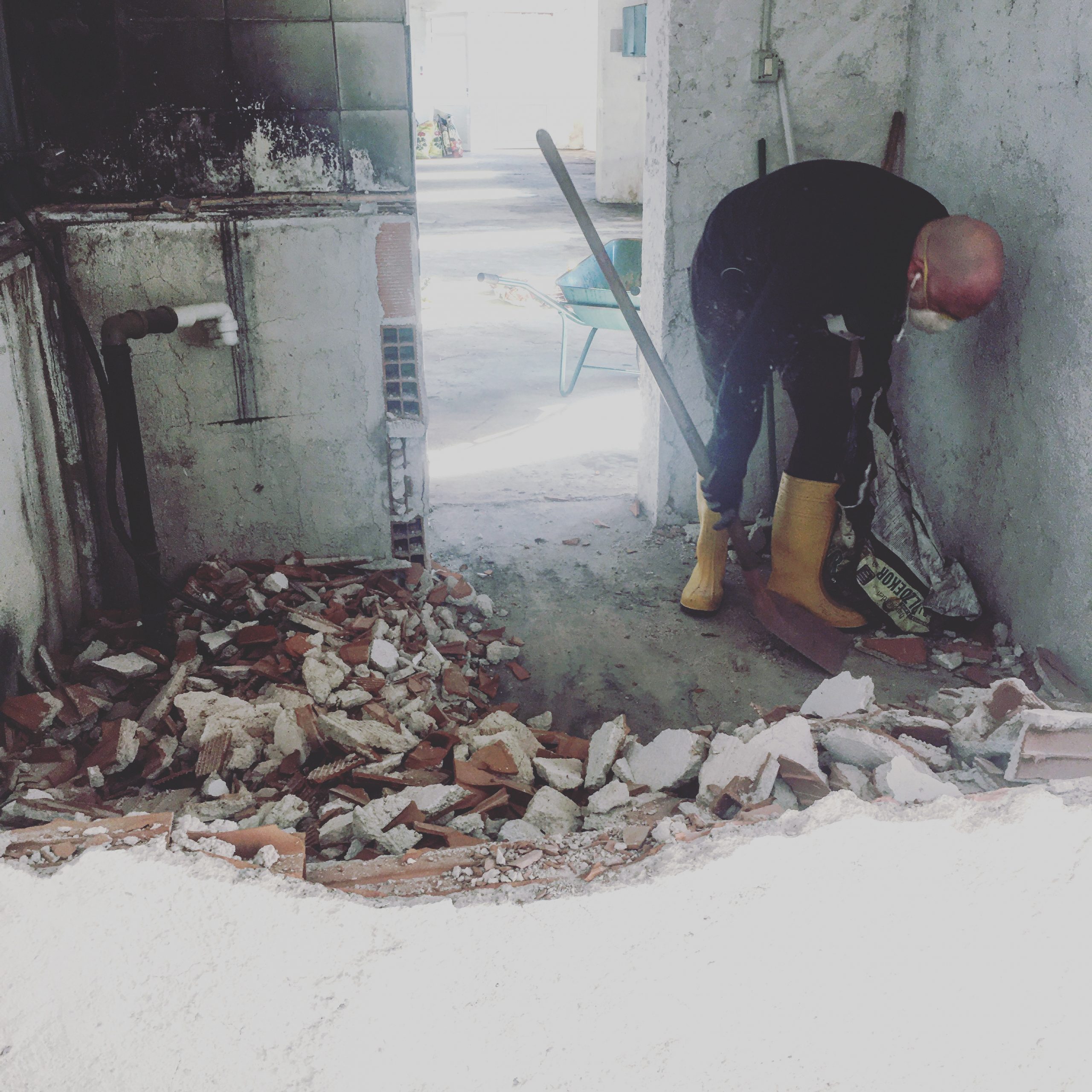 The plan is to have a corridor that runs along the rear of the three bedrooms (behind the wall where the toilet is currently situated) and have access to the rooms off this corridor. The walls that currently block off the views (to the left of this photo) will be demolished and the dividing walls extended to the front of the house. By doing this, all three rooms will have uninterrupted views. We’re hoping to install sliding glass doors in each room, instead of the windows which are there now – and each set of doors will hopefully lead out onto a balcony which will run along the length of the front of the house. Because of the incline that the property is built on, the bedrooms are much higher up from the road and so a long balcony will still be private. 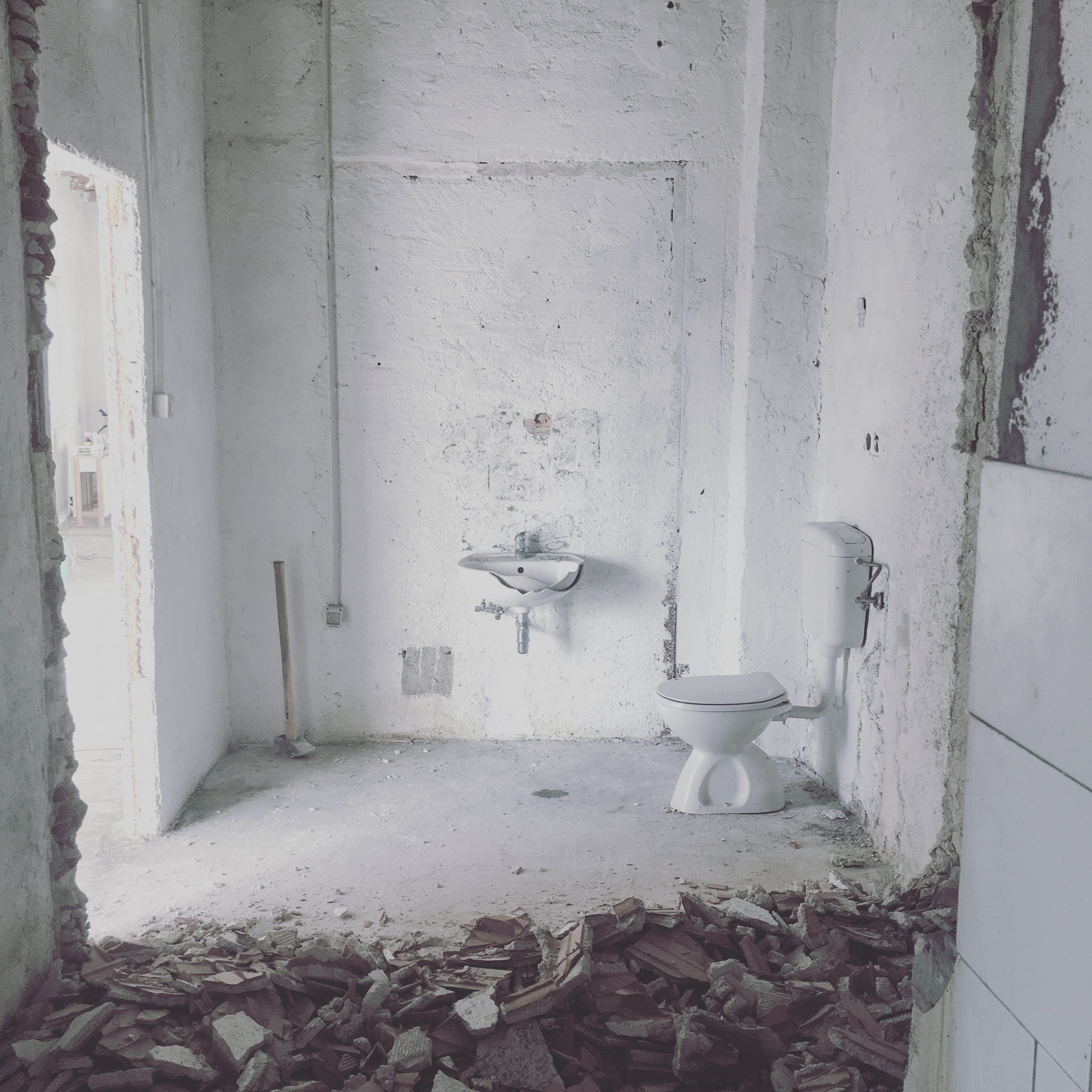 Two of the bedrooms will be guest rooms and will be similar in size and design. Both will have simple – but beautiful – ensuites, and as we have plumbing already in, the job will hopefully be easier than starting it all from scratch. We envisage the ensuites being back to back to further cut down on plumbing problems.

The work has definitely started, but once we’ve done the clearance we can do, it’ll be over to the professionals. We need the electrics to be looked at – and we’re preparing ourselves for a complete overhaul in this department, especially as we want this house to be as intuitive as possible. We need architects to help us with the plans. And we obviously need to start the investigation into the boundaries again. Although at least this time, we know what to do and what to expect. It’s been a long time in the planning and we’re very happy that in the midst of everything that is going on, we have a renovation project to keep us occupied. Think we’ll definitely be kept busy… 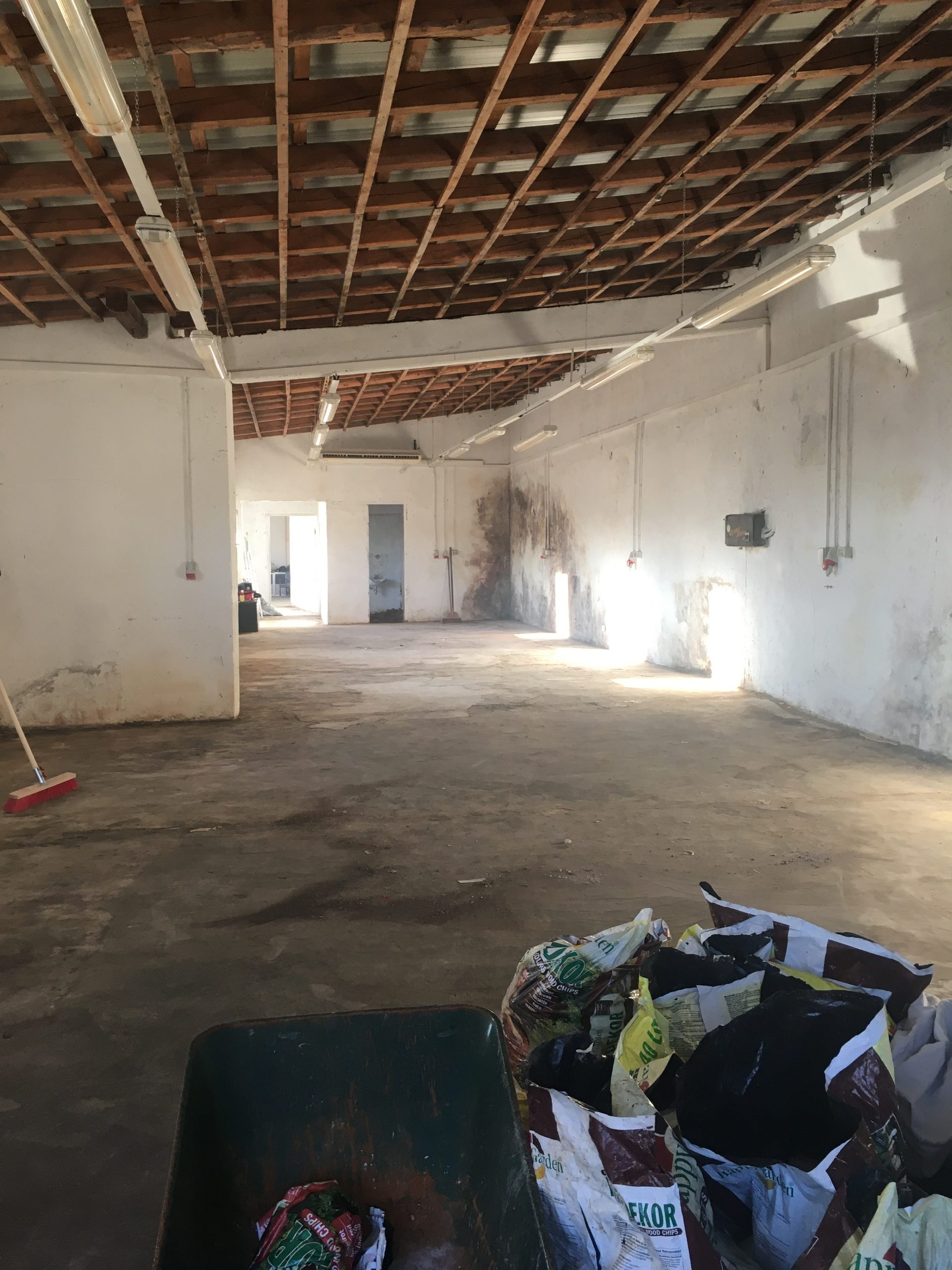