The living room, when we bought our Istrian stone house, was dark and oppressive. Walls were plastered in places, painted in places and in other places, the stone work was exposed. Window frames and external shutters were a faded green colour. The pine floor boards were untreated and the original beams, very dark and exposed.  The stair treads were also exposed, and there were no risers or spindles and no handrail, meaning that they felt very unsafe. The previous owners had left much of the furniture – all dark wood and dark brown leather, and definitely not our taste  – and all in all, it was a pretty unloved space. 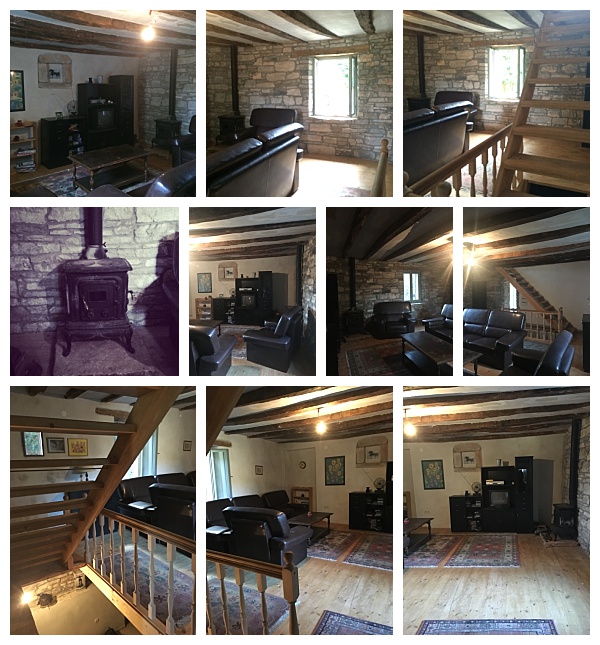 This was the first room we tackled as we needed to have somewhere that would be a comfortable retreat from the renovation chaos going on around us, and as our furniture arrived from England within a couple of days of arriving, we had to accommodate quite a lot of it somewhere, away from the building work. One of the first things we did was paint all of the walls, including the exposed stone work, white, which immediately lifted the room. We also stumbled along with the ornate cast iron stove we had inherited but it was proving to be very efficient, and so when we spotted this concrete beauty we knew it would be perfect for what we were planning. 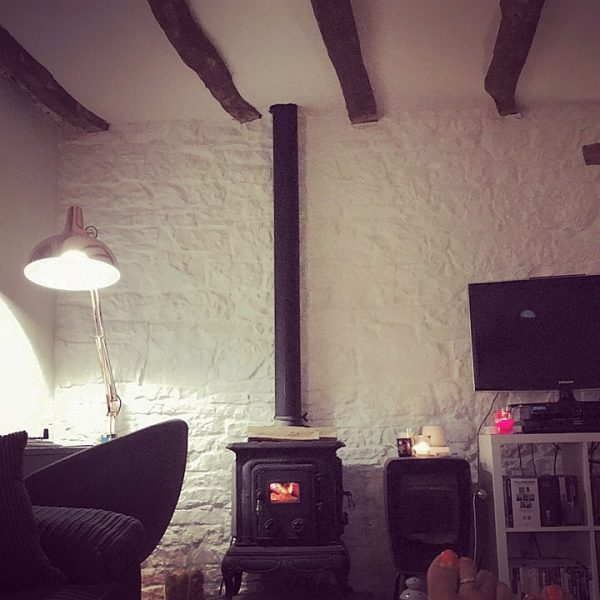 A new chimney had to be built from the Snug (immediately below the living room), as our Dovre Stove which we brought over from Didsbury was being fitted down there, and up through the living room, into the bedroom and out through the roof. New ventilation was also installed. The white walls did definitely make a big difference in the early days, and with some familair and some new furniture in place, we did have a cosy room we could retreat to at the end of a long day. 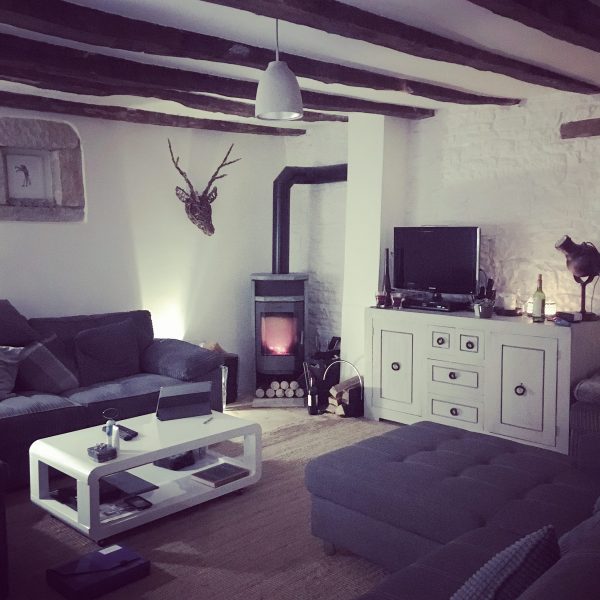 However, we’ve continued to chip away in this room and today, we think we might finally be happy with it, and be able to put away the paintbrushes. For the time being.

Those beams have all been treated for woodworm and caulked, as there were too many gaps and holes and we wanted clean lines between the beams and the ceiling. They were then undercoated and then top-coated with a soft grey satinwood. 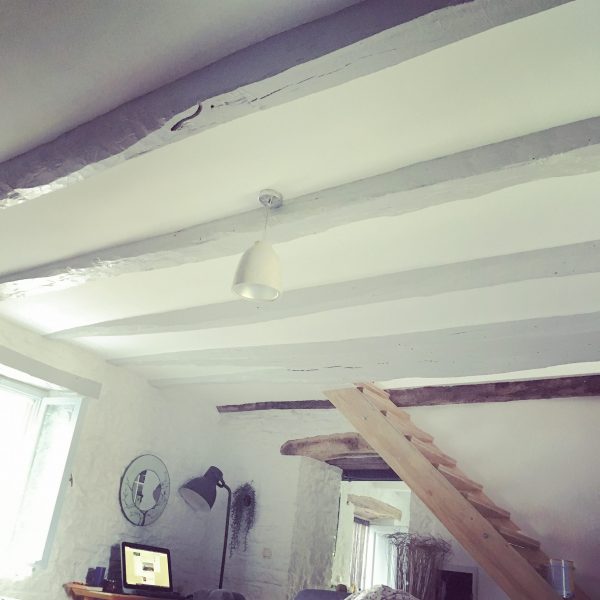 The faded green paint on the windows and frames and external shutters was sanded away and the woodwork was primed, undercoated and finished in a very pale blue, to complement the grey beams. 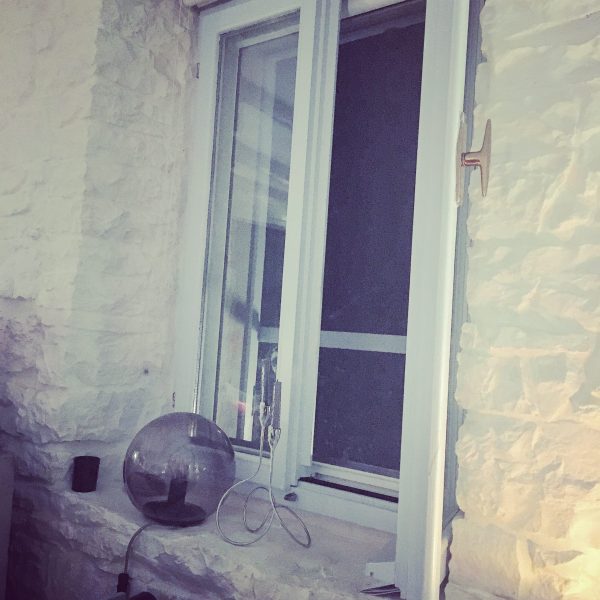 I find it very difficult to look at a room and think that it’s finished, especially when the rest of the house is in renovation chaos. I suppose I should try much harder, but I can always see something else that needs doing, or I go somewhere and see something I like and have to incorporate into the house. Such has been the case with the living room. The white walls have definitely been much, much better than the exposed stonework, but something just wasn’t quite right – and a visit to a beautiful bar in Ljubljana told me what was missing… 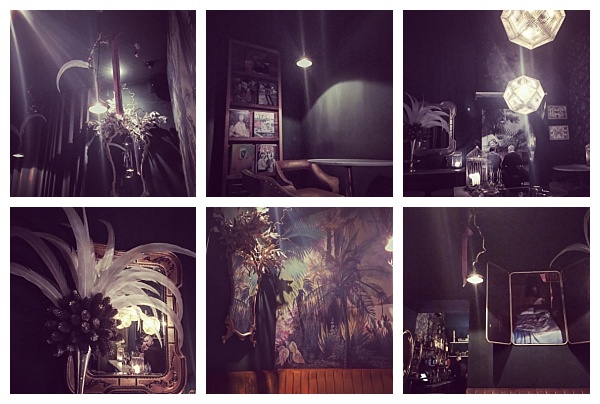 I loved the deep navy and gold and the patterns and textures and accessories and knew that this was what the living room had been missing. so set about creating an area of the room that was dark and luscious. 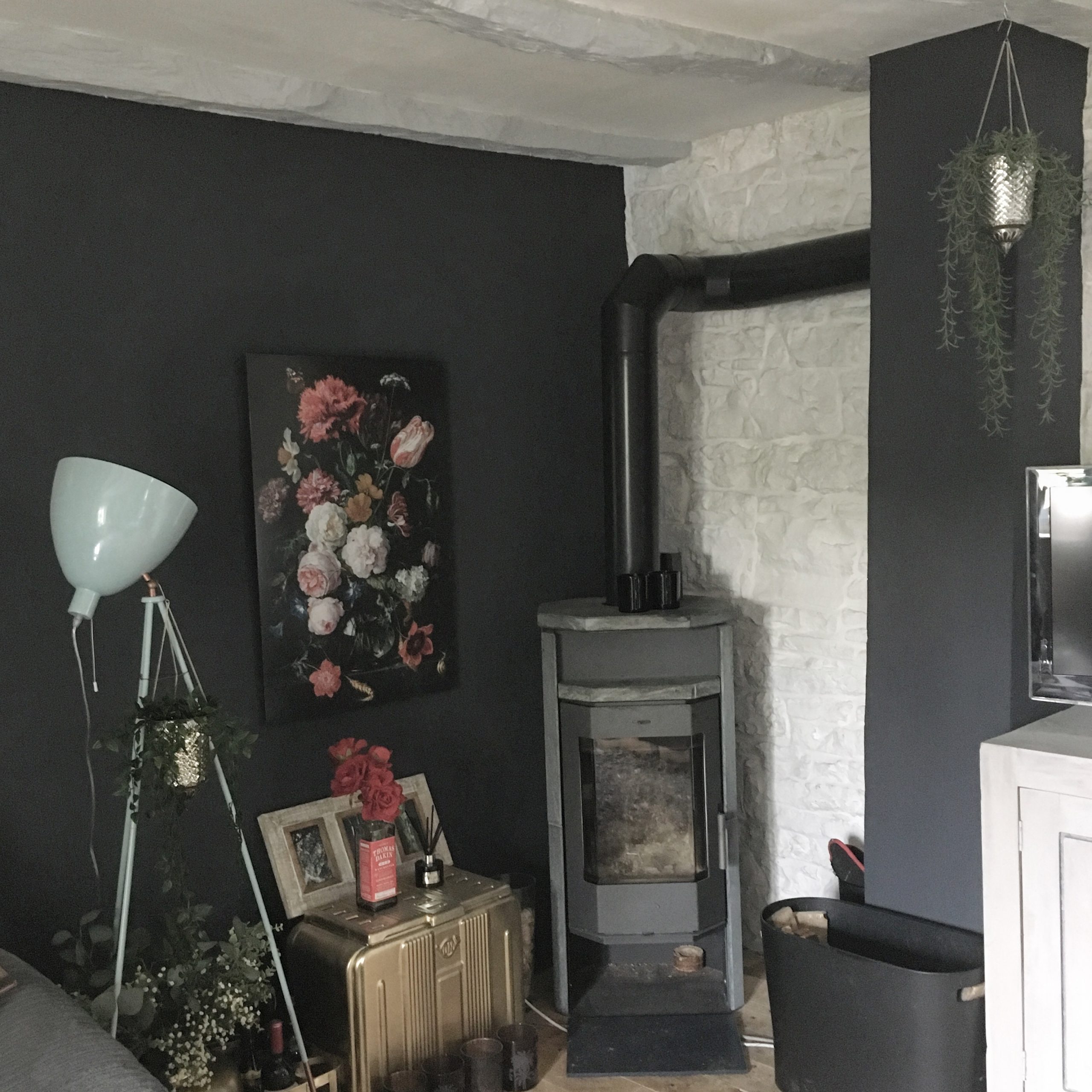 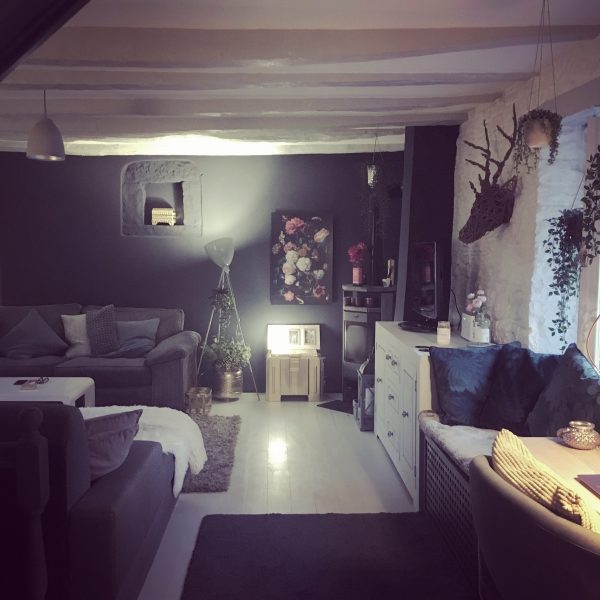 We decided that as well as painting the wall a very, very dark navy, the time had come to tackle the floor. The pine boards were not looking good and so it was decided that the whole floor would be painted in the same soft grey satinwood as the beams, pulling the whole room together. 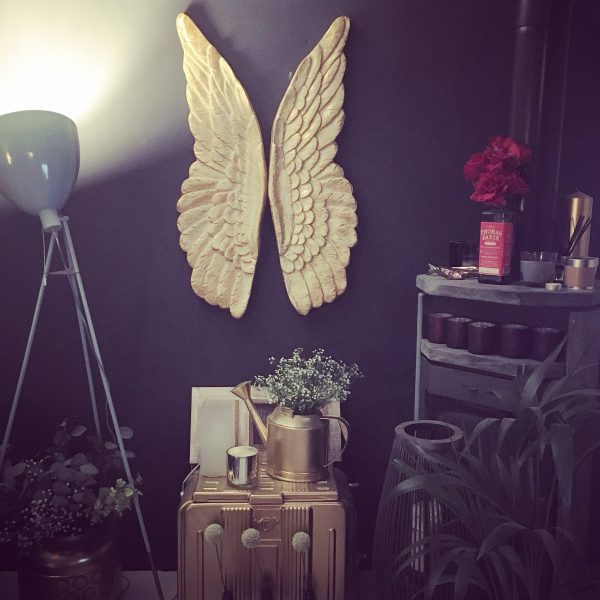 The very dark wall just lends itself to a bit of contrasting bling, so as well as the gold sprayed stove, these angel wings take pride of place. A purchase which I just couldn’t resist… 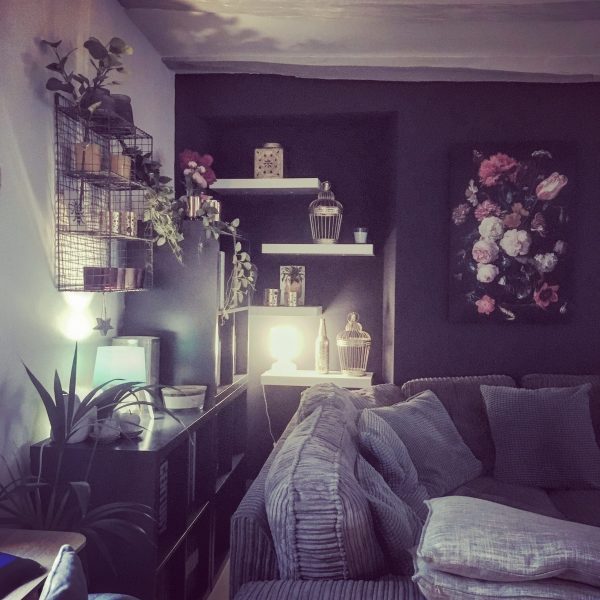 The white IKEA cube storage was also sprayed and I think it all looks a whole lot better. Instead of the white cubes dominating the room – and being very obviously IKEA – they now blend into their surroundings much more. The spray painting was all done outside and it was completed very quickly. meaning that we didn’t have to wait hours for paint to dry before putting books back and accessorising. The artwork is actually from Bauhaus – our equivalent of B&Q. I’d spotted something very similar on Pinterest and had been searching online to see if I could source something like it – and there it was, as we were buying paint 🙂 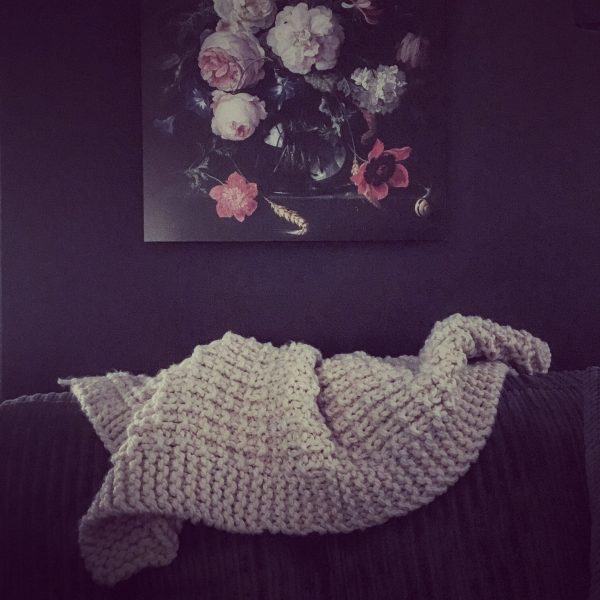 Those rickety old stairs were given a much needed safety overhaul and makeover, too. It was a bit of a concern to discover that some of the treads had never actually been secured, so they were brought forward – given more foot room – and all securely attached. We also fitted a wooden back to the stairs, meaning that they looked a whole lot safer and much sturdy. Those spindles, will, at some point, be replaced, but we decided that as the stairs were being painted, they might as well also have a lick of paint. Considering how pretty bland they are, we think they look quite a lot better in their new colour and disguised ever so slightly, with two faux sheepskin covers. 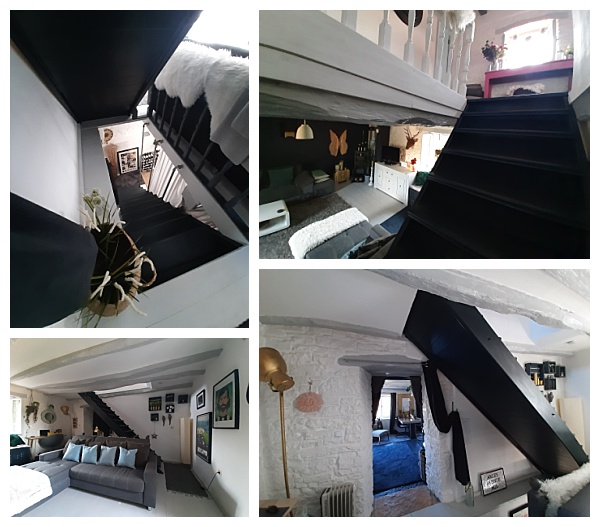 The final thing we did to finish off the room – for the time being! – was to repaint the sideboard, which the TV sits on top of. It had been a pale grey but was beginning to look a bit grubby, so the bavy blue satinwood came out again, and transformed it, into something quite beautiful and elegant… 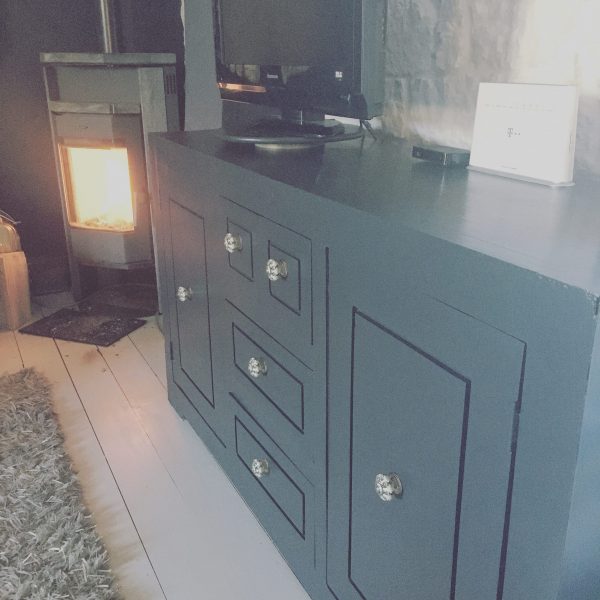 And there you go. For not too much expenditure, a new living room, inspired by Kolibri Cocktail Bar, in Ljubljana.