After a long hiatus from travel, and after getting our second vaccinations, we decided to do a bit of exploring this summer. Croatia has managed the pandemic well, so far and so we felt comfortable about beginning to explore where we live. Travel in the past has usually involved flights, ferries and/or long car journeys. This one, in August, involved a car journey and a ferry – although to be fair, we’re now located right next to the northern Croatian islands, so a ferry to Cres island, lasting only 20 minutes, was more than bearable.

The kind of accommodation was really difficult to secure in August. I have a rule of thumb – if where we are intending to stay, doesn’t look at least as nice as where we live, we look elsewhere. And, with travel having recently opened again up to Croatia, a lot of European travellers clearly had the same idea. Lošinj was our island of choice as we’d heard great things about, but were beginning to think we’d need to change our plans and look elsewhere as good availability was a real scarcity. Then I found The Dolphin Suites, in the very picturesque harbour town of Veli Lošinj and made a booking immediately, for The Garden Suite, a self contained apartment with outdoor space and access to the main pool and gardens. It’s definitely been one of our better finds! 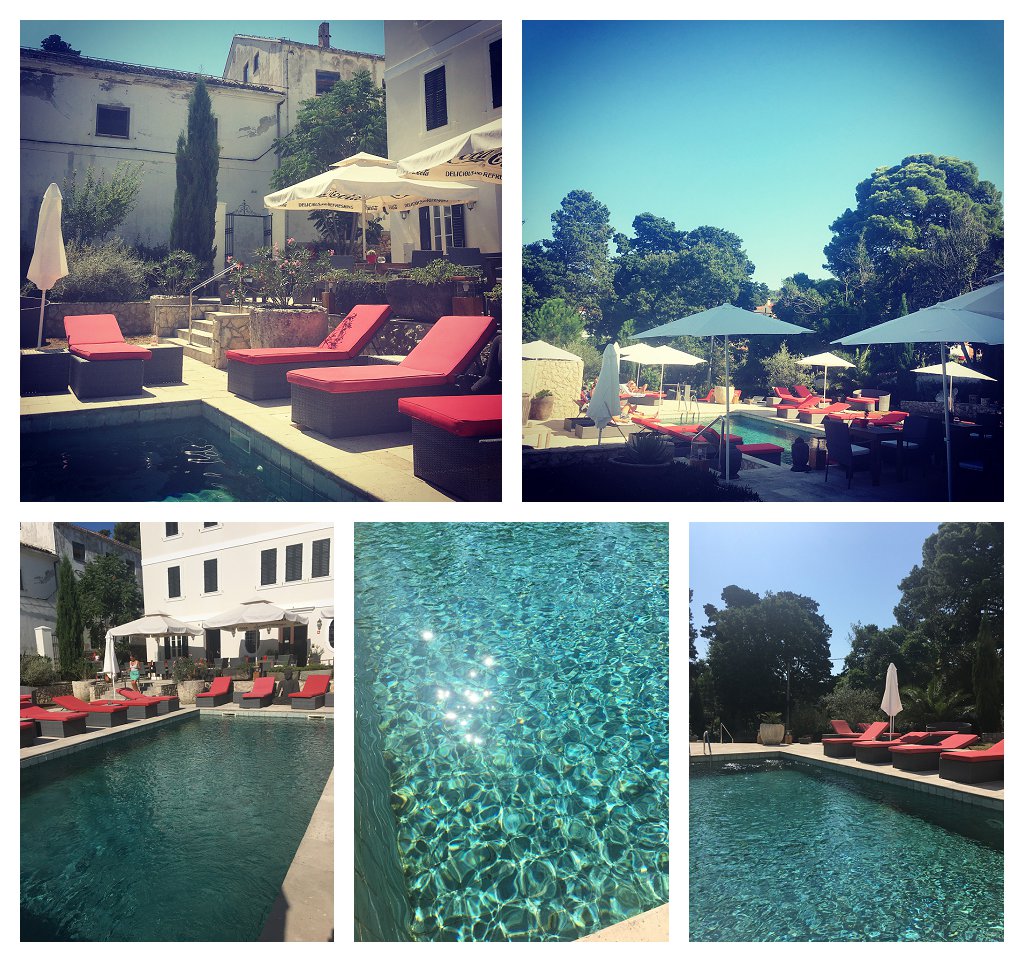 The old schoolhouse has been beautifully, and very sensitively, renovated. Now an elegant villa style building, it is enclosed by a a high wall and therefore is very private – despite being in the centre of the small harbour town. The outdoor areas are immaculate. Scrupulously clean red sun loungers, and umbrellas, fringe the pool. Which is one of the prettiest pools I’ve seen. It’s an original tiled pool – very retro – and so lovely because it doesn’t have that false bright blue hue to it. There’s an Indonesian vibe going on, with Buddha statues half hidden behind huge potted plants. At night, this area is particularly pretty, as it’s lit up. 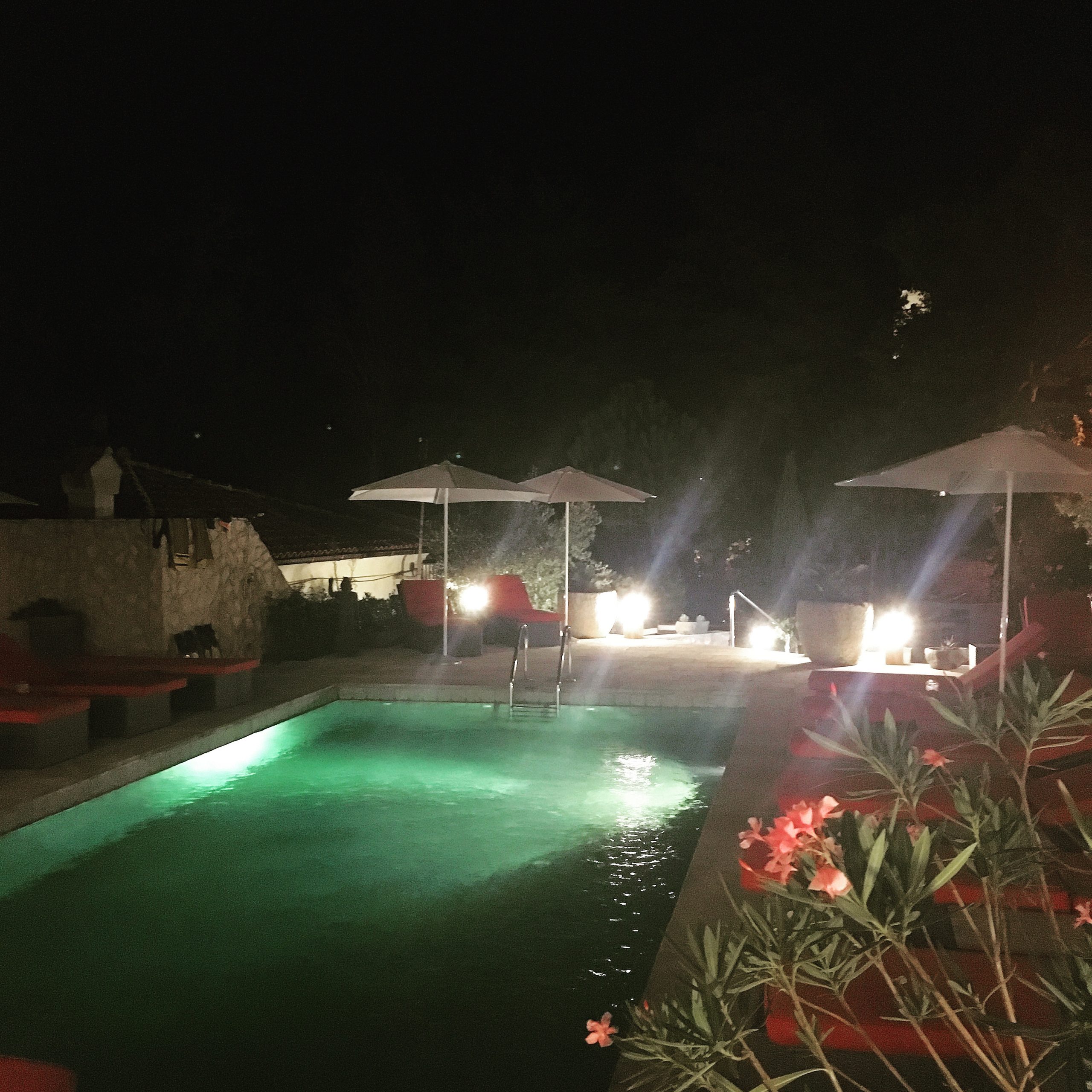 Technically bed and breakfast, this boutique accommodation also offers evening food – more of which later, as it deserves a paragraph of its own. Breakfast is buffet style, but because of ongoing Covid restrictions, it actually became a very leisurely affair. A daily menu (which doesn’t change but doesn’t need to as it is very extensive) of what is available is delivered to your breakfast table – on the terrace, above the pool – and you just tick whatever you want. However much you want. And, as often as you want. The breakfasts we had here were up there amongst the very best we’ve had. Options included smoothies, fresh juices, teas, coffees, granola, cold meats, cheese selection and fresh fruit. The hot selection is quite simply, outstanding – particular favourites of ours were the smoked salmon and scrambled eggs and the avocado. Both are served on homemade granary/nutty toast and garnished with thin slivers of tomato and spring onion. And, the portions are large. Very large. 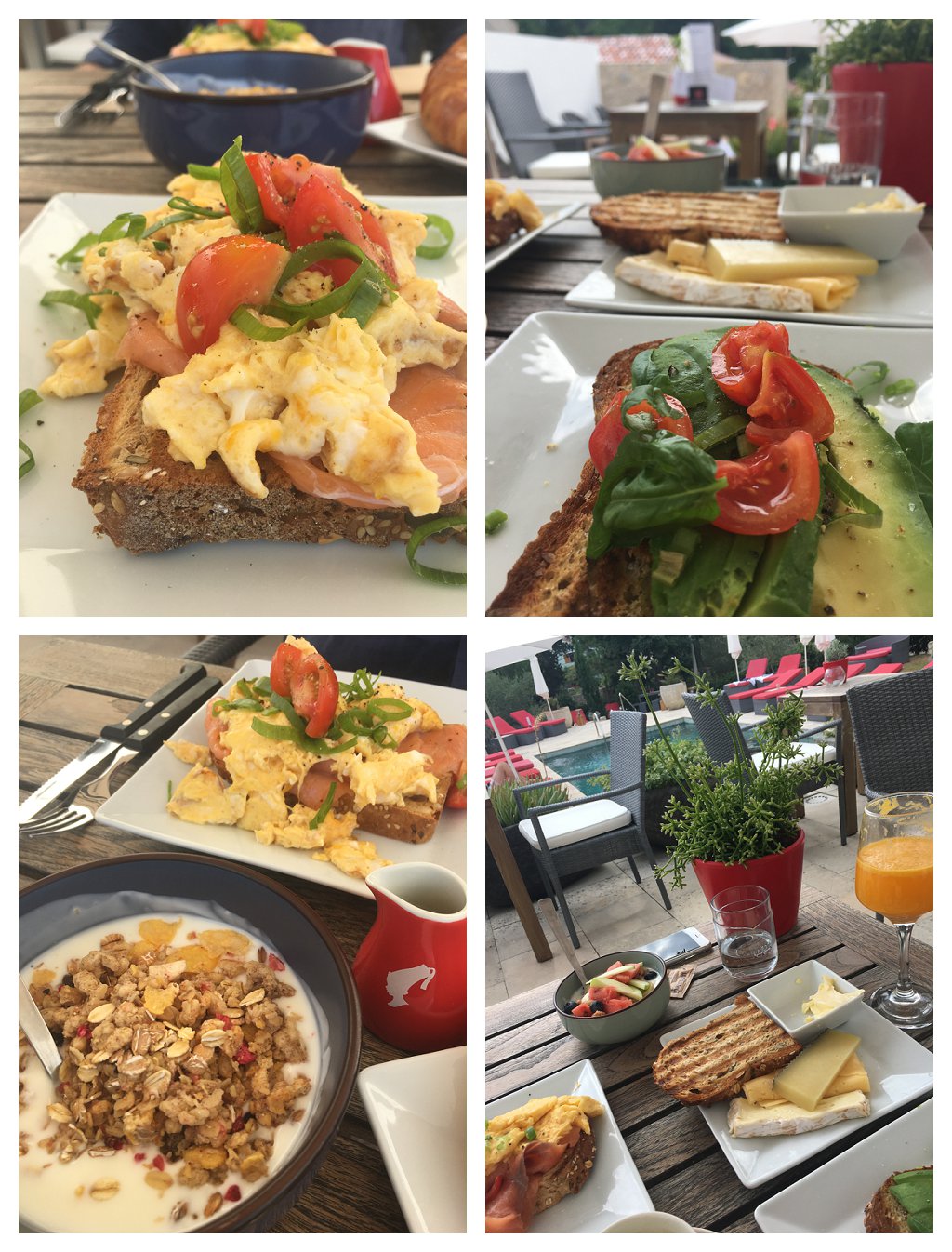 So, to that evening food. Because we found The Dolphin Suites to be so utterly relaxing, on a couple of occasions we left the pool area quite late and didn’t fancy moving too far from our little Garden Suite. I was told that they offered a “bar snack” selection in the evening and so on the first night we chose to opt for this, we thought we’d get not much more than crisps, nuts etc.

Oh, my word. How wrong were we?

Forget bar snacks, and think more exceptionally well cooked, innovative and beautifully presented street food. Over the course of our stay, we actually ate here three nights – obviously meaning that we do need to return to Veli Lošinj, to closer explore the restaurants. The manager – a lovely, lovely Dutch guy called Marnix – has completely nailed it, we think, on the food front. We tried a variety of dishes. On the first night, we went a bit tapas style with mixed cheeses, olives, veggie nachos, potatoes and dips, and it was more than enough. But our interest had been piqued by the mention on the menu of Flammkuchen, described to us as kind of German pizza. A bit more delving and we discovered that flammekueche, or tarte flambée, is a speciality of the region of Alsace in France, on the German border. It is composed of bread dough rolled out very thinly in the shape of a rectangle or oval, which is covered with fromage blanc or crème fraîche, and then toppings added. Similar to a white pizza, but also very different. The toppings we chose were rocket, rocquefort & pear and proscuitto, feta & rocket. Astoundingly delicious. And, absolutely nothing what we imagined a “German pizza” was going to be… 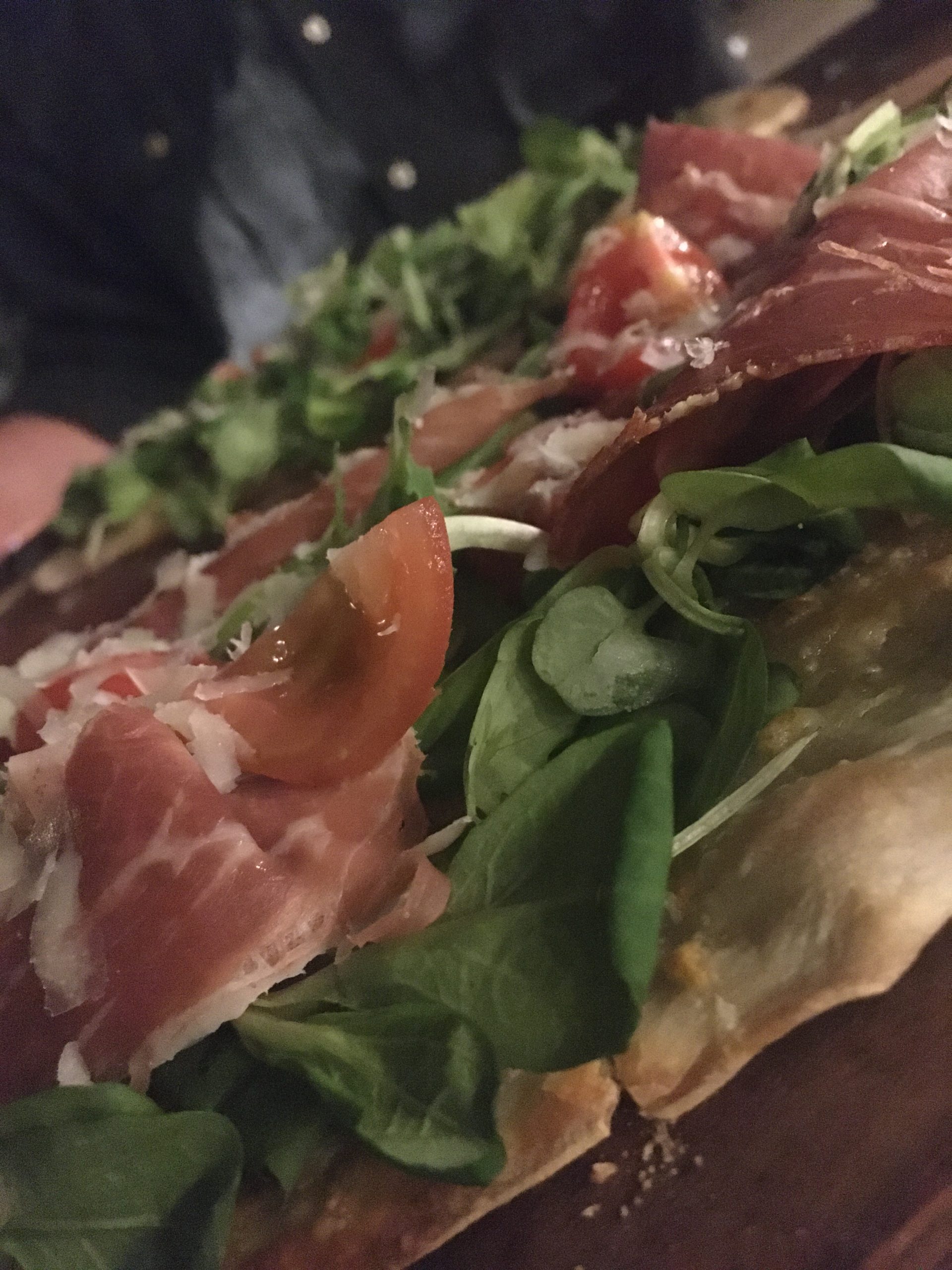 As were eating our Flammkuchen, a couple at a nearby table were served something with such a delicious aroma that we had to ask about it. “Stew”. Now, I love a stew, so I was sold on this and decided on our last night, we’d eat here again and try this. Also on the menu was Indonesian Chicken Soup, so we thought in-for-a-penny-in-for-a-pound. We do largely stick to a vegetarian diet but can sometimes be swayed by a good meat dish – and these were very, very good. The soup was wonderfully spicy, with lean, lean chicken fillet pieces – replicated a few times since we’ve returned. And the stew – oh, wow. The tenderest, tenderest cubes of beef, in a rich wine sauce, with potatoes and carrots – and served in a hollowed out bun. A great touch, as it soaked up the juices. No photos of these dishes however, as they were wolfed down so quickly. Testimony to how good they were. So, there you go – “bar food”…

The privacy afforded by the Garden Suite was perfect for us. All other rooms are accessed via the main reception, but we were able to just head around the corner and into our own space. No meeting other people, unless we wanted to. And with a little outside area, with very comfy furniture, which was perfect for an early evening vino and a listen to our own music. The room was spacious and like the rest of the accommodation, sparklingly clean. The shower was powerful and very spacious and the toilet was separate to the washing area. We have absolutely no complaints about the level of accommodation – and we (“I”) am very fussy – and would more than happily return to this suite. 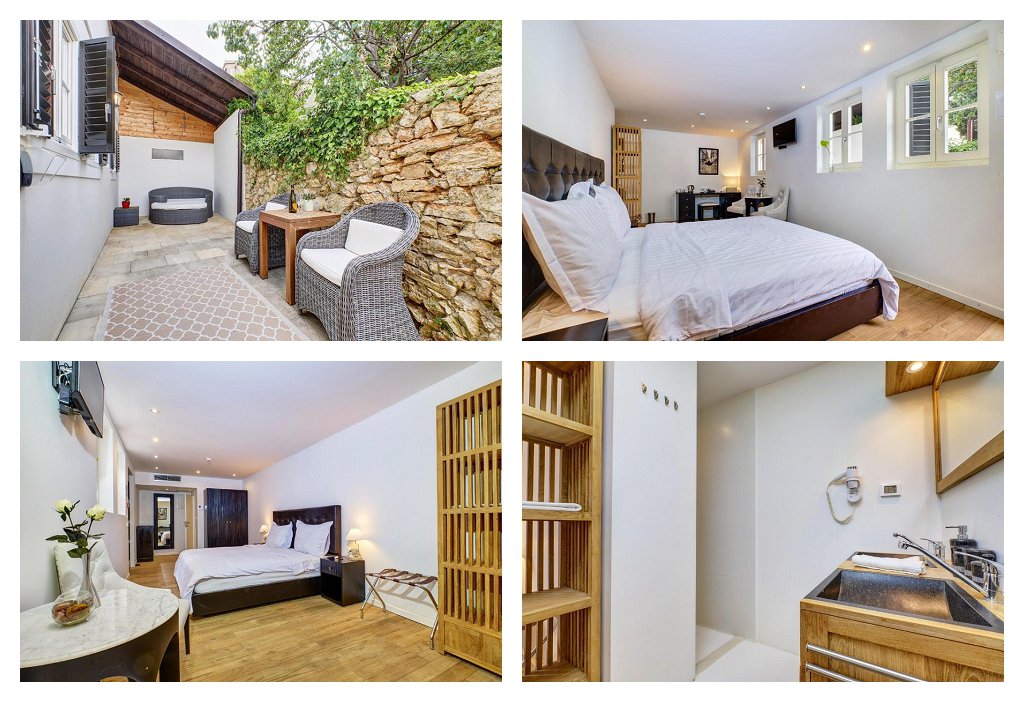 Parking is free of charge, in a public (but very safe) car park nearby, and the harbour is a ten minute walk away from The Dolphin Suites. Veli Lošinj is tiny – the port, which is where you’d want to be, can be explored in under an hour. But you would then want to re-explore and re-visit as it’s just so very beautiful. We’re now looking forward to returning to the island in the autumn, to discover what life is like, when it’s not quite as hot… 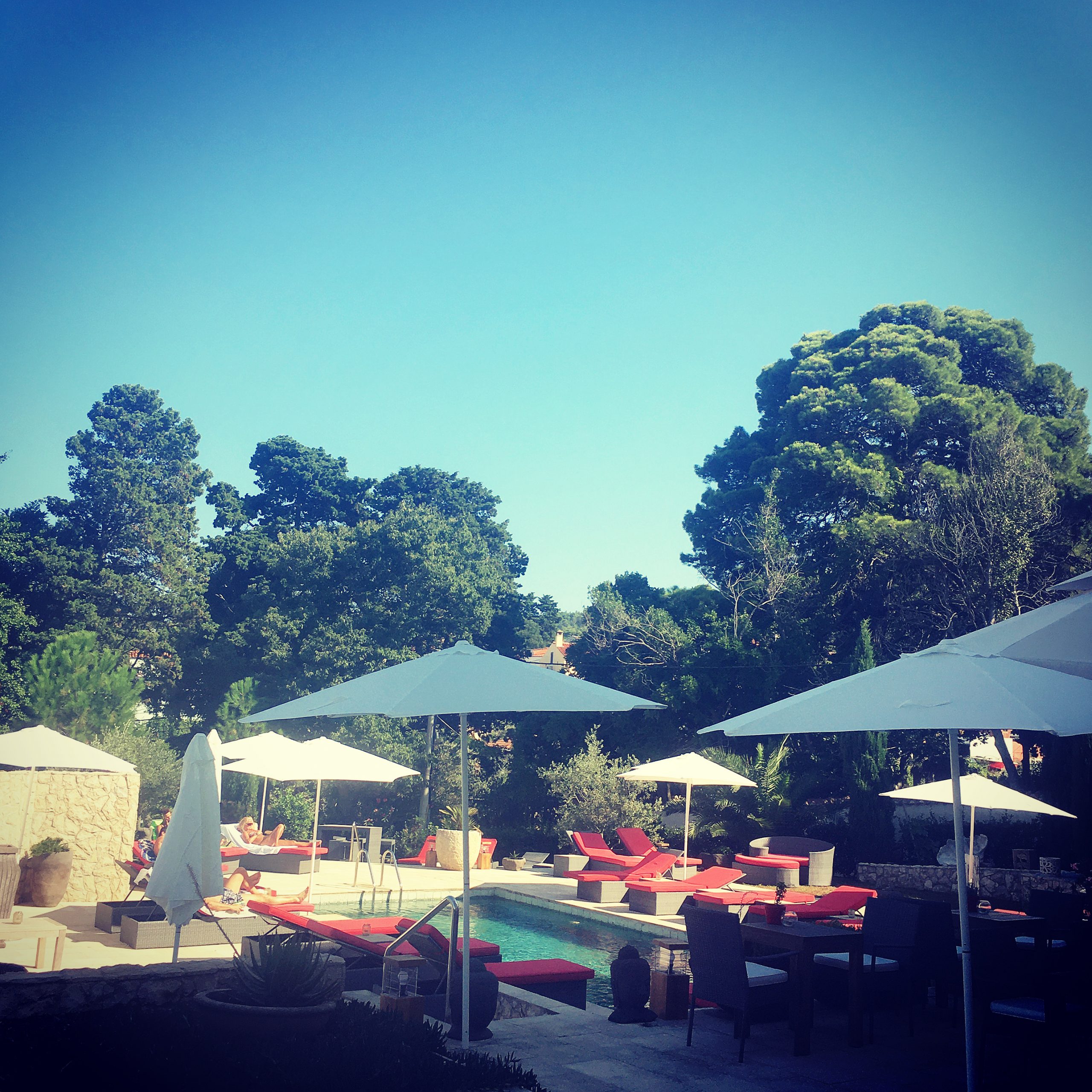