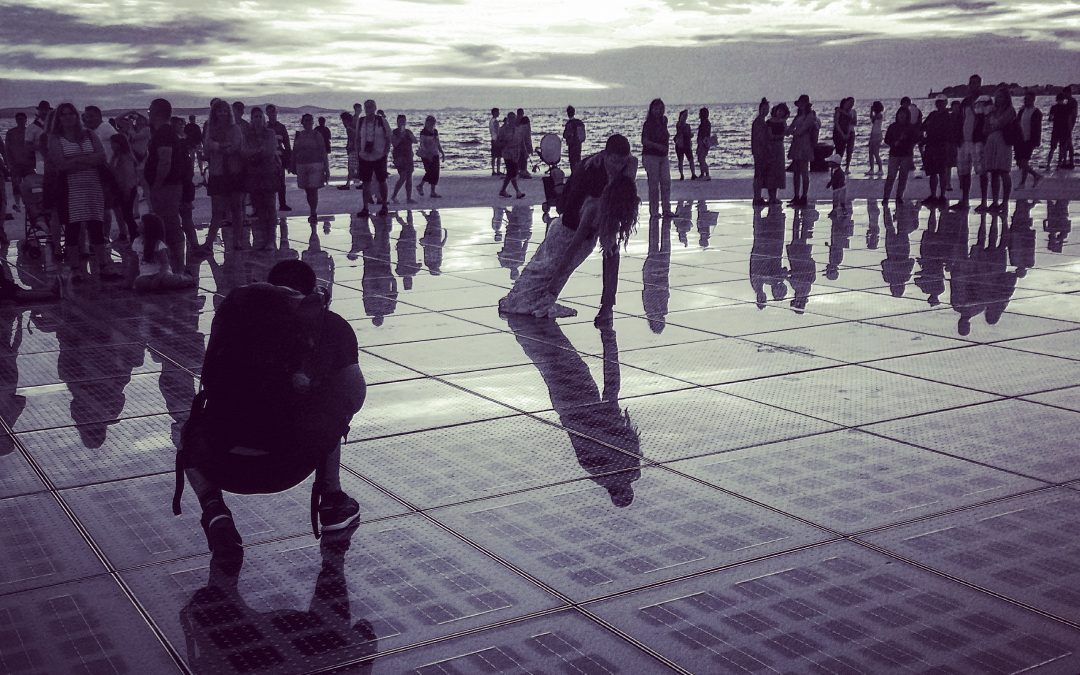 Zadar has the most beautiful sunset in the world, more beautiful than the one in Key West in Florida, applauded at every evening.

So said, Alfred Hitchcock, on a visit to the stunning Dalmatian coastal city of Zadar. And, if he said it, it must be true… 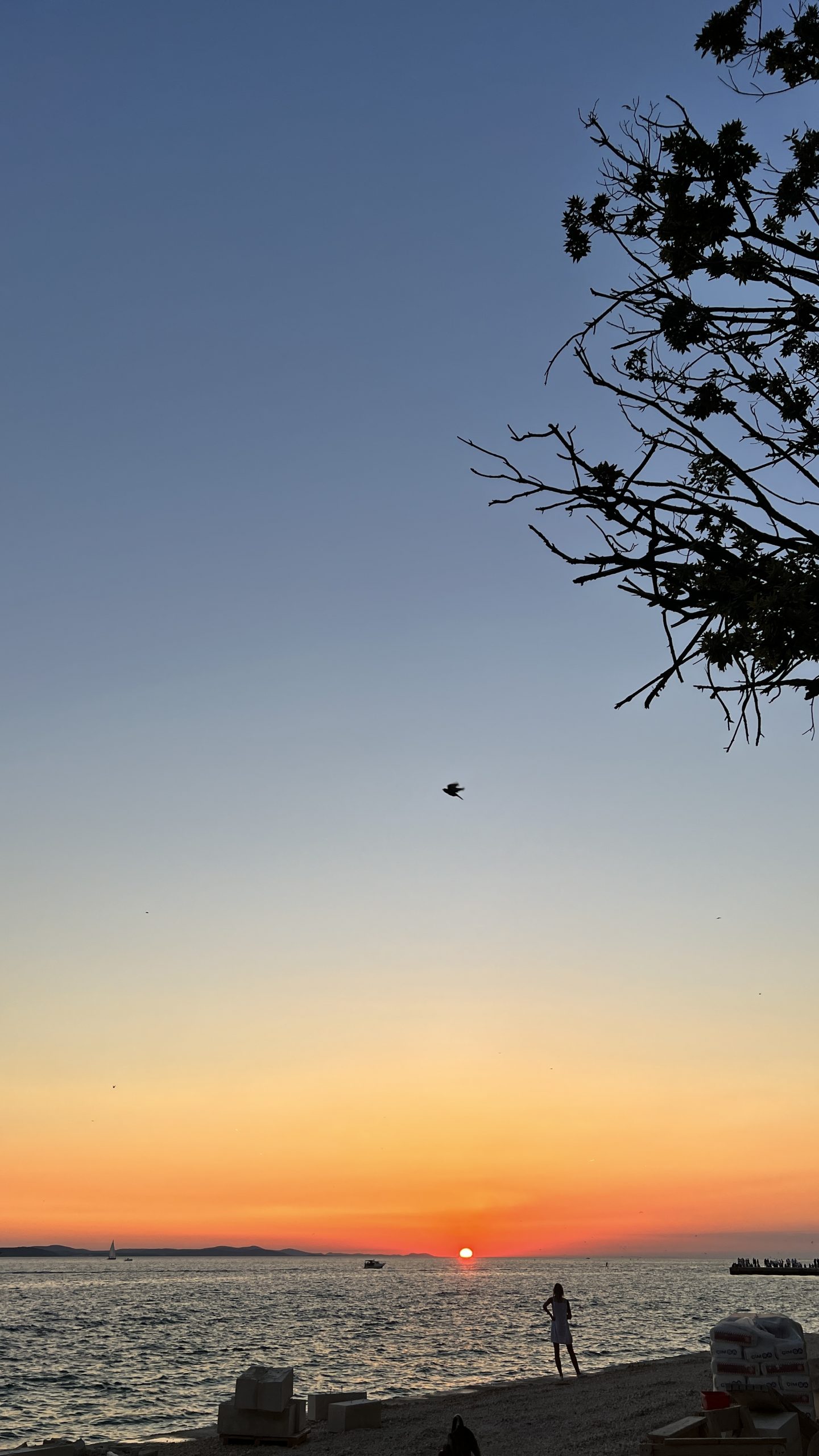 We are now very, very lucky that we can reach Zadar quite easily. Living in Istria, it’s a beautiful drive down the Adriatic Highway – or, the Jadranska Magistrala – the 650 km long road which runs just a few meters parallel to the Adriatic sea, Running from Rijeka on the Kvarner Gulf to Karasovići on the border with Montenegro, this road is one of Europe’s most unforgettable journeys. As it it weaves its way around deeply indented turquoise bays or skirting scree-covered mountains, there’s scarcely a single boring stretch along its length. Especially when you are driving alongside the northern islands of Krk, Rab and Pag, rising like sleeping elephants out of the sparkling sea. This summer, family flew into Zadar from the UK and so we took the opportunity to spend a couple of days here, to introduce them to one of our favourite Croatian cities.

The name Zadar, means gift of the sea, and located where it is, on a peninsula surrounded by the Adriatic, it’s name makes perfect sense. As well as being beautiful, it is ancient and full of history, as explained by Boutique Hostel Forum :

The heart of Zadar, a location where it all began, is a street known as Kalelarga (Široka ulica). The people of Zadar will tell you it’s older than the city itself. Even though Zadar was mentioned already in the 4th century B.C.E. as the settlement of the Liburnians, it was the Romans who started forming the city two thousand years ago on the peninsula with Kalelarga as one of the main streets. The city was built like a typical Roman city with all its amenities. As the Roman Empire started falling apart, so did Zadar deteriorate in particular during the Migration Period, with low point in the 5th and 6th century. From the 6th to 11th century Zadar was a part of the Byzantine Empire. It became the administrative centre of Dalmatia and Venice’s equal on the Adriatic sea. And Venice sure didn’t like that becoming one of the most fierce opponents of Zadar and trying to overpower it for centuries to come. In the 11th century Zadar formed part of the Croatian lands for the first time, with Croatians becoming the majority population. The period between the 11th and 14th century, when the first Croatian university was founded in Zadar, is considered Zadar’s Golden Age. Despite constant threats and occasional pillages, Zadar flourished in every aspect during that period.

The Venetians finally managed to get hold of Zadar in the 15th century and it remained under their rule until the end of the 18th century. Zadar’s economic role was diminished and the city had to face two additional threats: the plague and the Ottomans (Turks). After a brief French rule beginning of the 19th century, Zadar became a part of Austrian (-Hungarian) Monarchy turning into a splendid, vibrant Dalmatian city yet again. Another round of ups and downs was in store for Zadar in the 20th century, with Austrian-Hungarian, Italian, Yugoslav and finally Croatian rule superseding one another. Heavy bombardments during the WWII destroyed more than half of the historical centre. The second half of the 20th century saw tourism-related rise which was again interrupted by a series of attacks during the Croatian War of Independence.

The historical centre of Zadar is small. Concentrated on a tiny peninsula, it can be walked around in a couple of hours. Of course, proper exploration will take a whole lot longer because of the labyrinth of marbled streets, opening out onto squares and parks and the coastal esplanade (The Riva), which is currently being redeveloped in places (summer 2022), ensuring that wide pathways make walking and cycling a much more pleasurable experience. The centre is a traffic free zone, but there are large, and accessible outdoor car parks, around the city. We spent two days there recently, and car parking was easy and inexpensive. There’s much to recommend in and around Zadar, but highlights have to be The Sea Organ and the Salutation to the Sun, both designed by renowned Croatian architect, Nikola Basic. 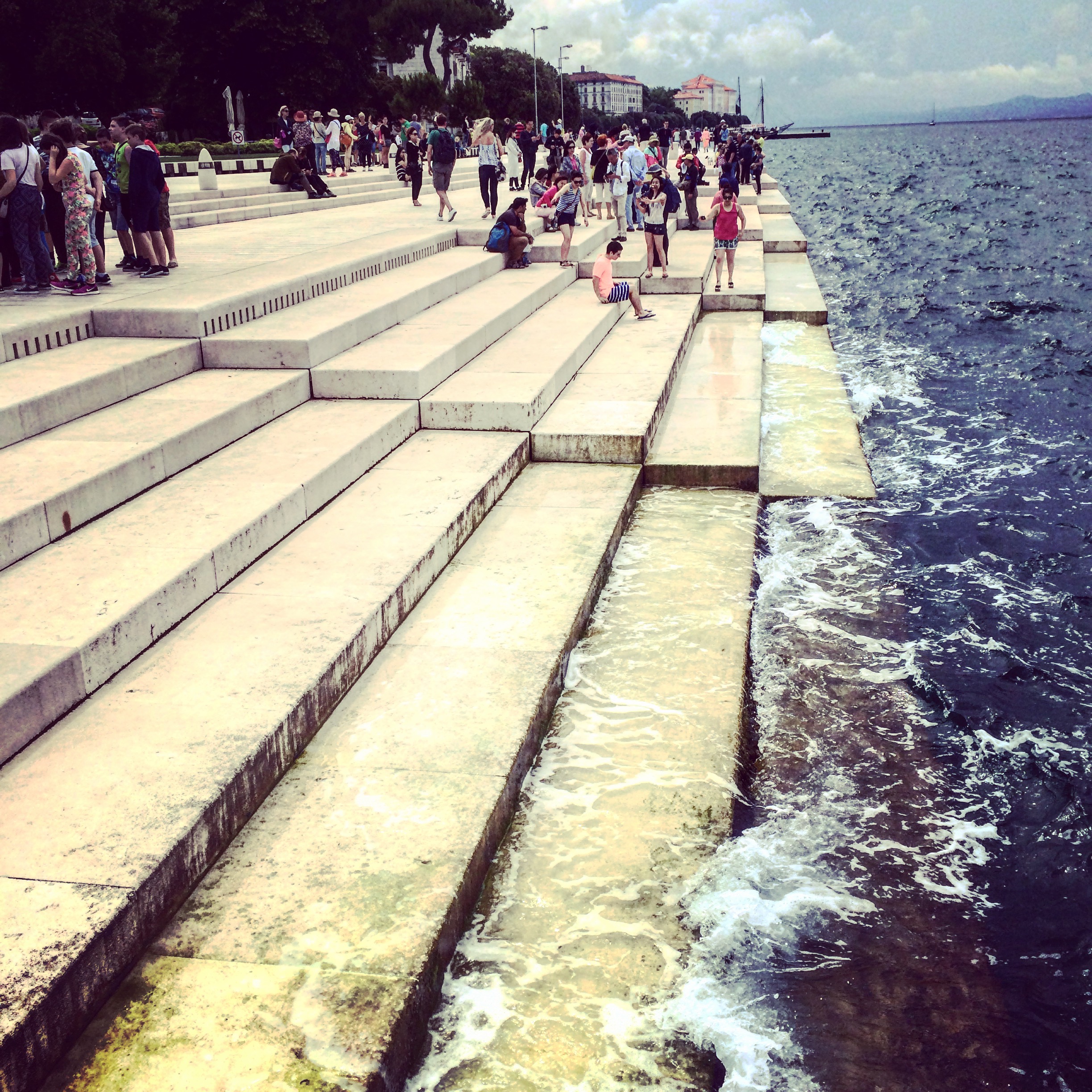 Both a piece of art and an experimental musical instrument, The Sea Organ creates beautiful chimes, using only the rolling power of sea waves. The installation looks like a series of broad steps leading down into the sea, hiding clever engineering beneath their surface, producing ever changing syncopated sounds. Close by, The Salutation to the Sun represents the solar system, with the sun and the planets in their proportionate sizes, featuring a series of circles made from photovoltaic glass panels set into the pavement. The panels gather energy from the sun throughout the day, and come evening, lighting elements beneath the glass create a mesmerizing display that simulates the solar system. The solar energy collected by Sun Salutation also helps power the entire waterfront. 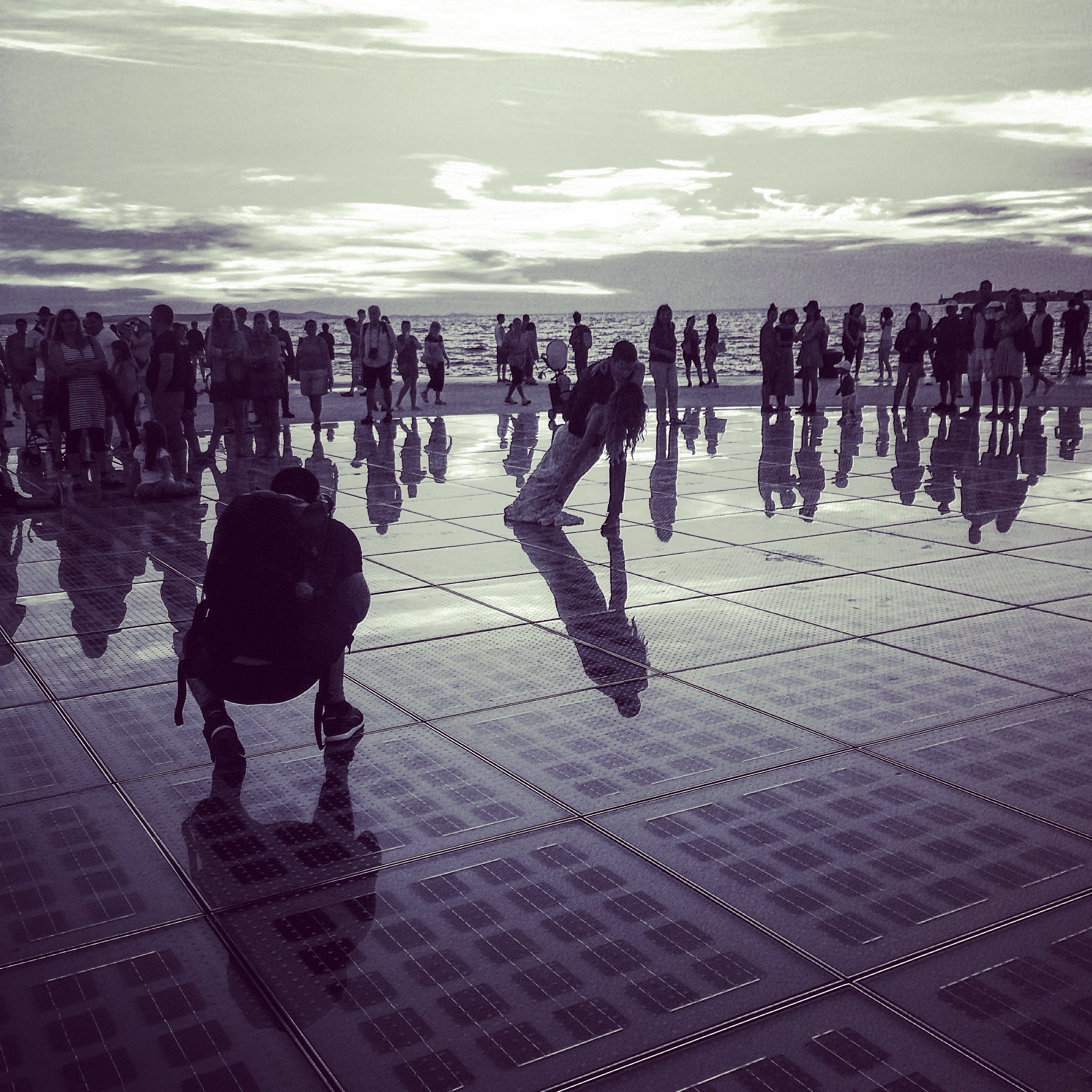 Zadar is a city of significant historical influences, including reminders of Venetian rule, but perhaps more obviously, Roman rule. From The Riva, you can walk a short distance and be in the centre of The Forum – no roping off, no entrance fee, no restrictions. Just ancient reminders of a past, right in front of your eyes. We’ve visited Rome and Naples and Athens and other historical sites, but there’s something that’s very special about this part of Zadar. Maybe because when we first visited, we didn’t really know anything about Croatia, lets alone its history, but now we live in the middle of it and it feels so real. Not just a holiday experience, any more… 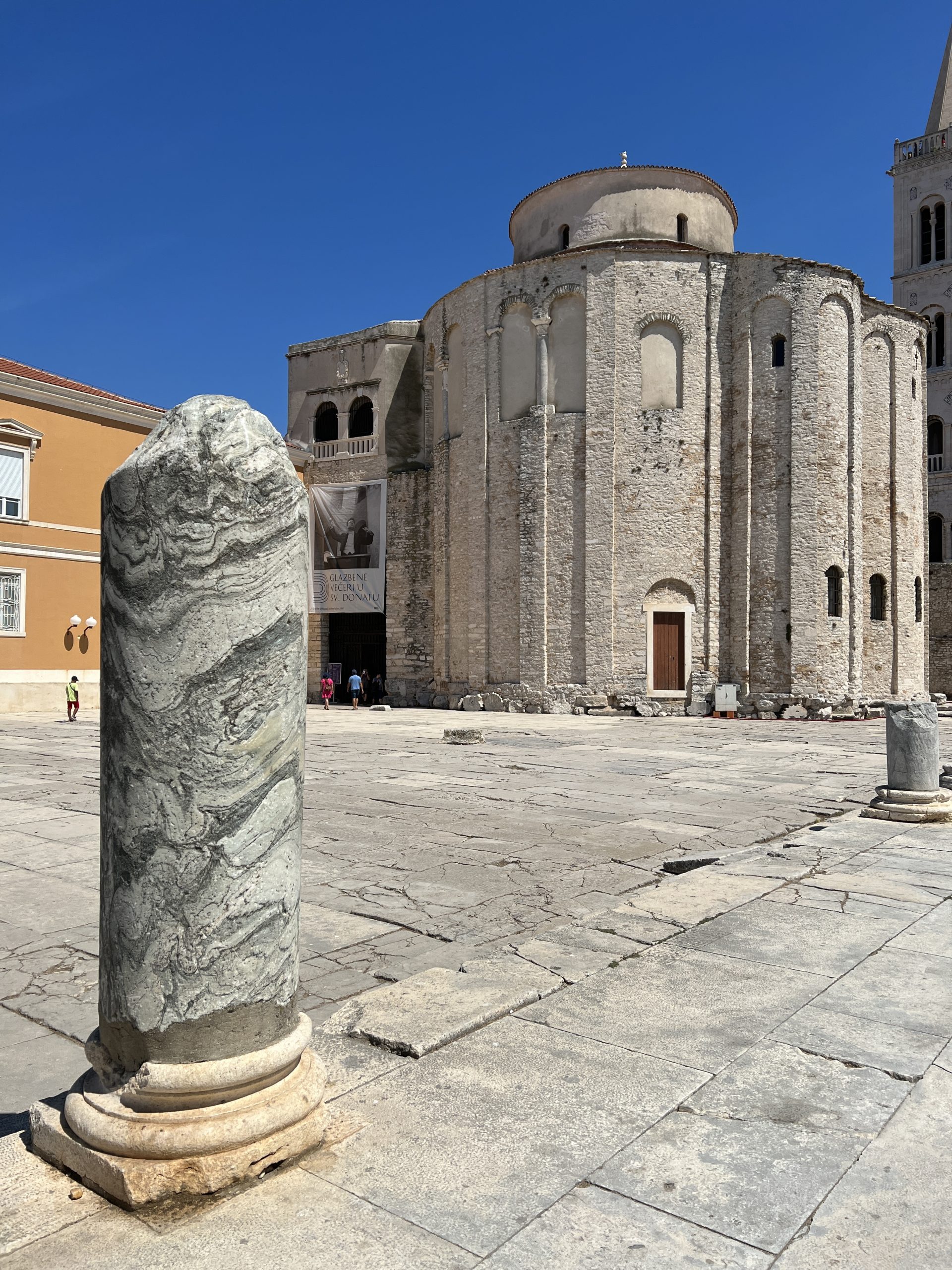 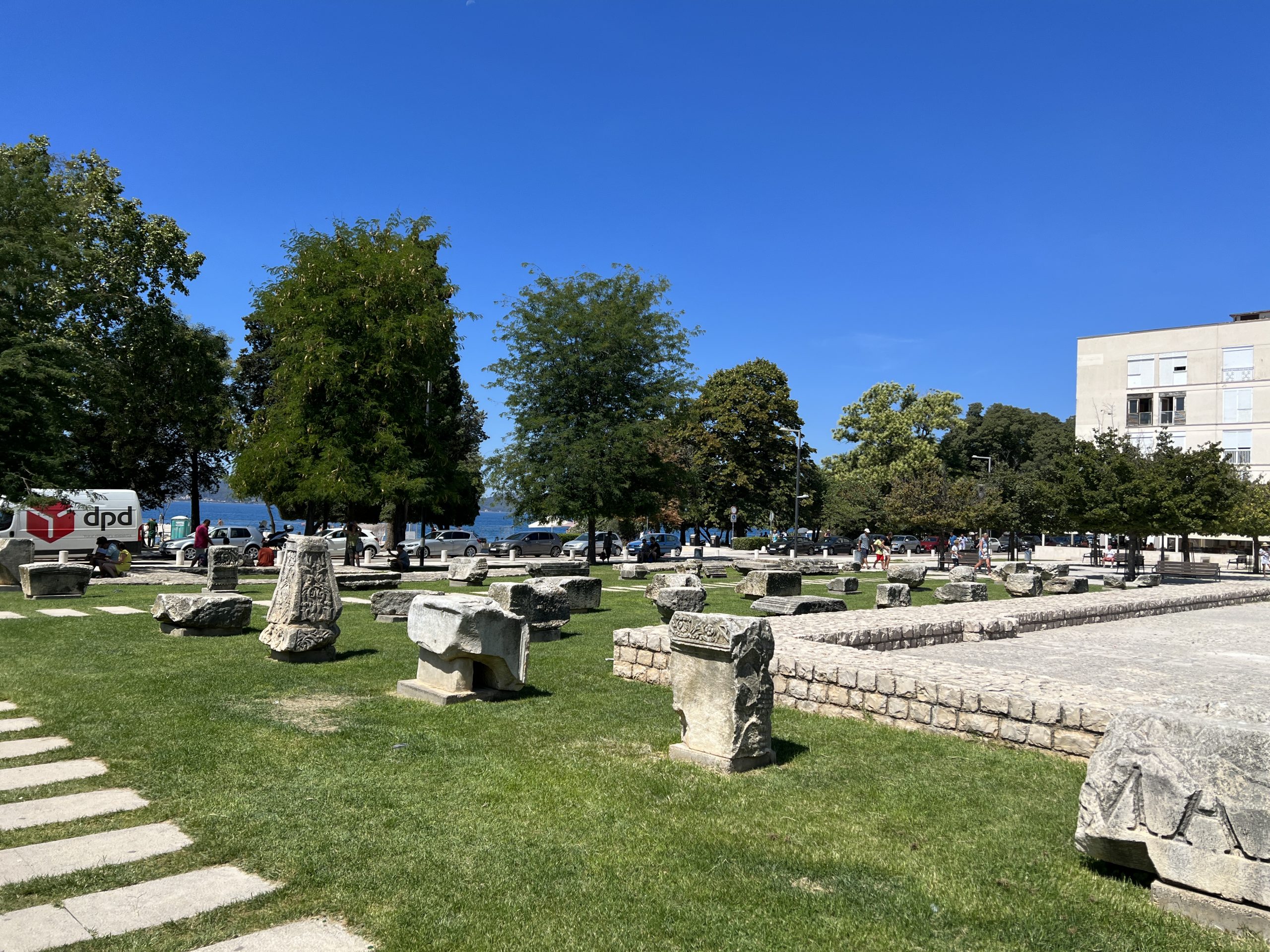 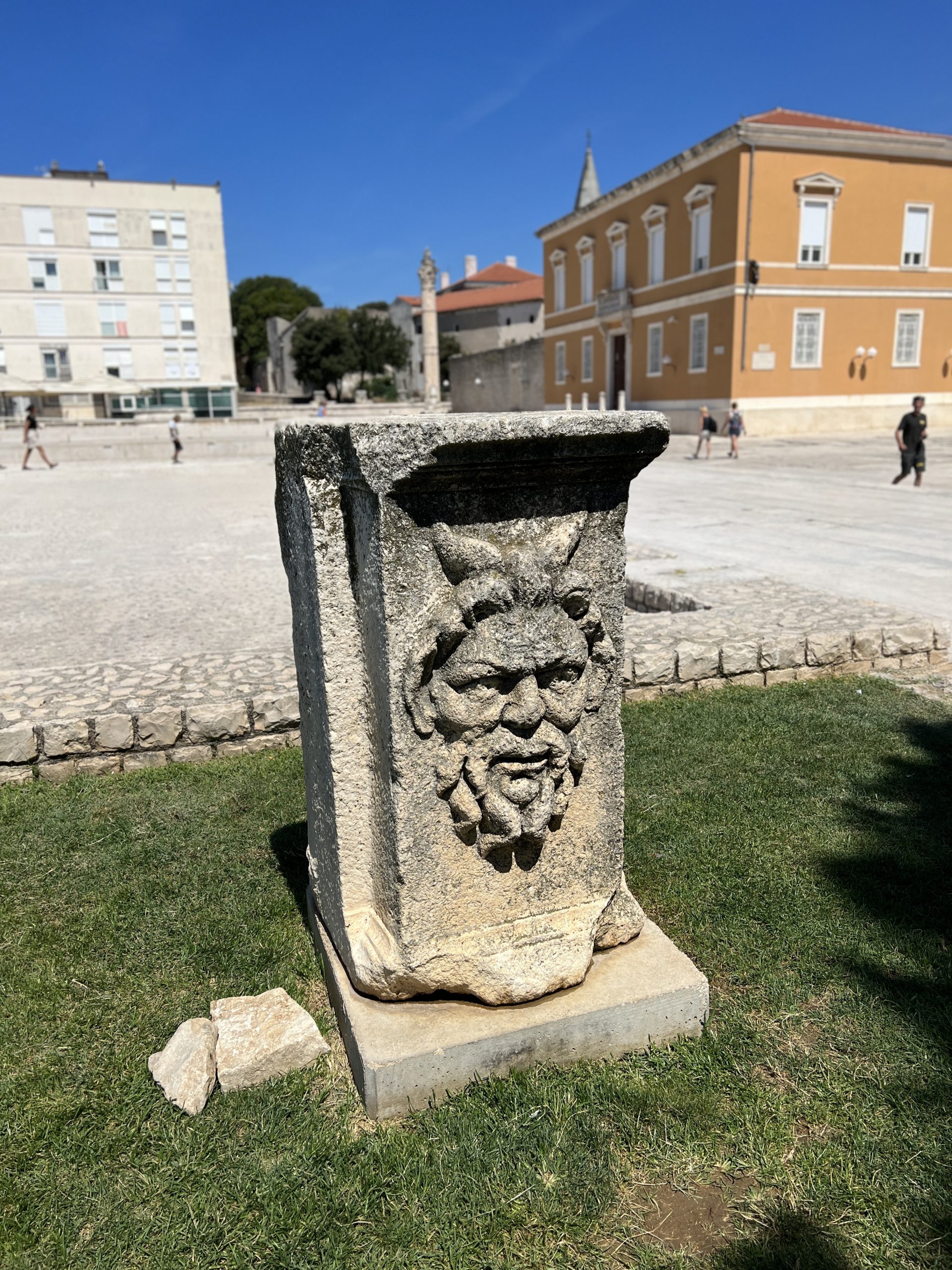 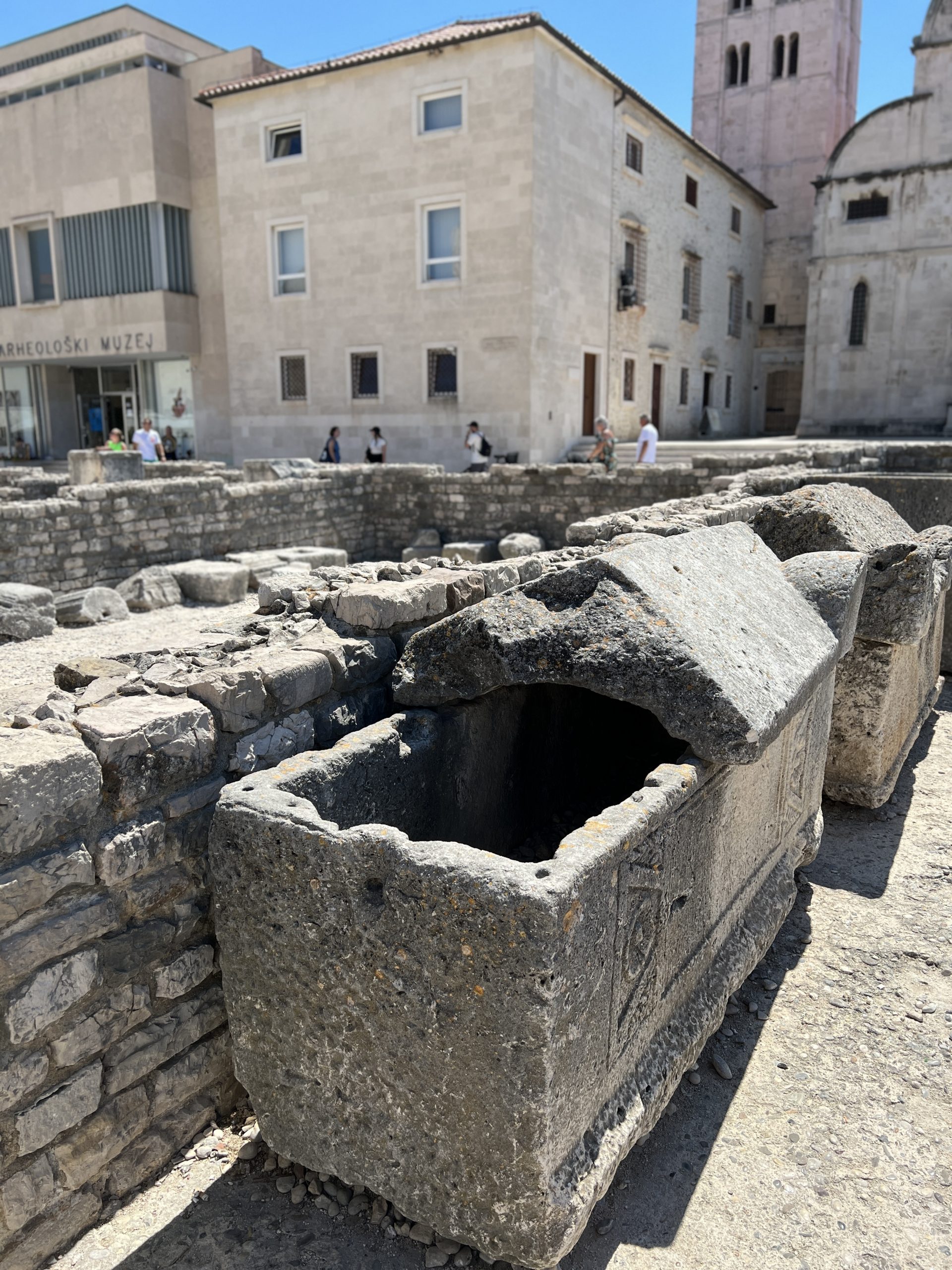 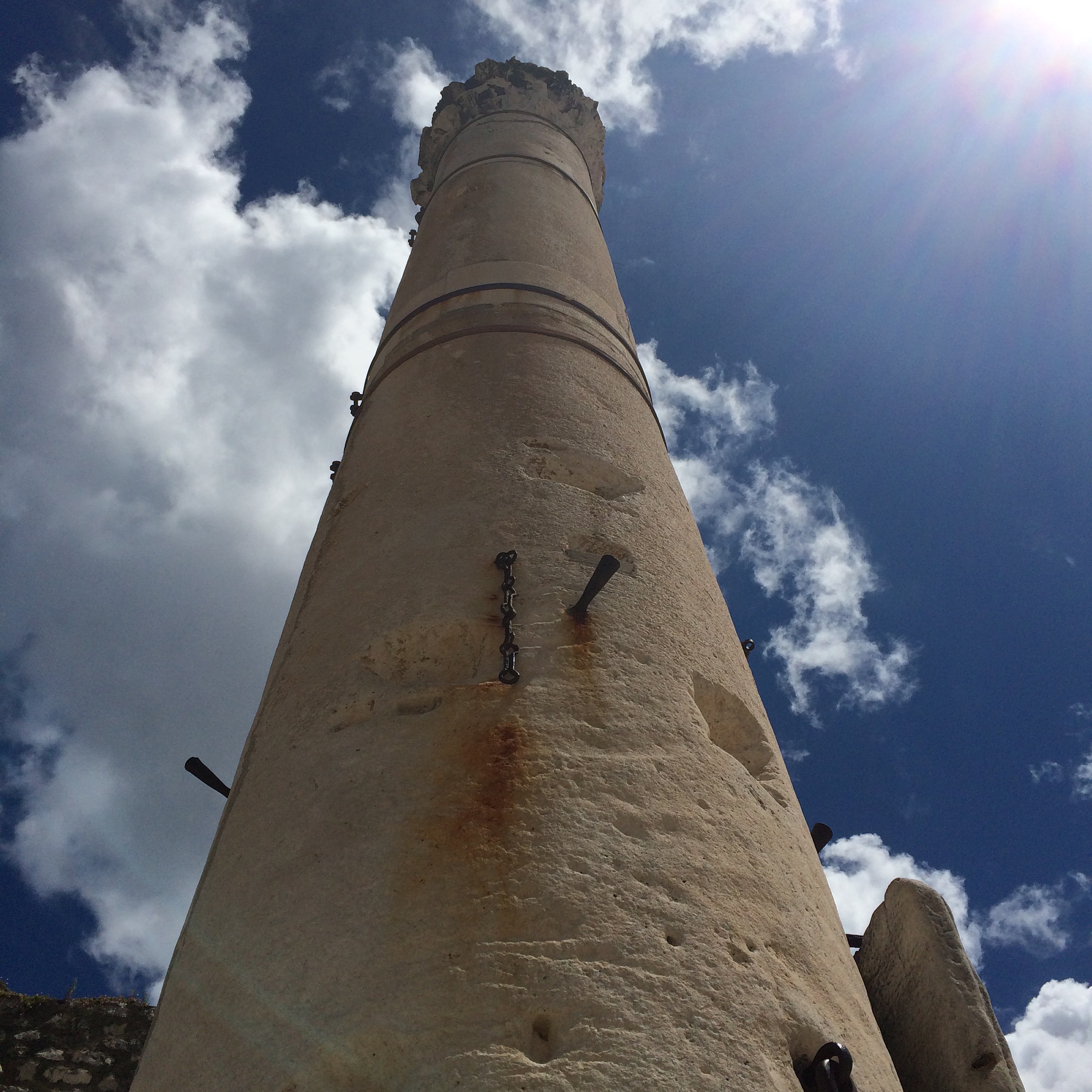 Zadar is located on the Dalmatian coast of Croatia, north of Split and Dubrovnik, making it accessible by road (if you are on a Croatian road trip) or by air, having its own international airport. As well as the historical sites and architectural structures, the city is full of fabulous restaurants, cool bars, boutique accommodation – and of course, the turquoise Adriatic which wraps itself around the peninsula. A much recommended Croatian destination.