Looking Back on Lockdown

Like the rest of the world, we’ve been living the Covid-19 lockdown, here in Istria, since March 17th. This was the day the country offically started staying at home, although we were feeling the effects before this date. Being so close to northern Italy, we were directly impacted pretty early on. We often travel to Trieste to do supermarket shopping, but when things started getting very serious in Italy, we stopped doing this. We were due to fly to Berlin in early March, but again, we decided against going, especially as the flights were from Treviso. And it’s just as well we didn’t go, as lockdown in Italy came in fully during the time we would have been away, meaning we could potentially have been stranded in Treviso.

From mid-March, schools, bars, restaurants, hairdressers, sporting facilities, theatres etc and shops deemed to be “non-essential”, closed. Everything literally stopped overnight. Supermarkets were still open, but we cut down on the trips out to them. Before restrictions became even tighter, we did a couple of “big shops” – but, it was immediately clear that people here, were taking things very, very seriously. Social distancing was absolutely respected, many people were already wearing masks, numbers allowed in to the supermarket were limited, and hand sanistisers and gloves were all readily available. Staff were all wearing masks and gloves, and the till area was wiped down after every customer. While all of this was happening in Istria, we watched aghast, at the slow response by the government in the UK, and listened to friends and family telling us that it mostly seemed to be like “business as normal”. 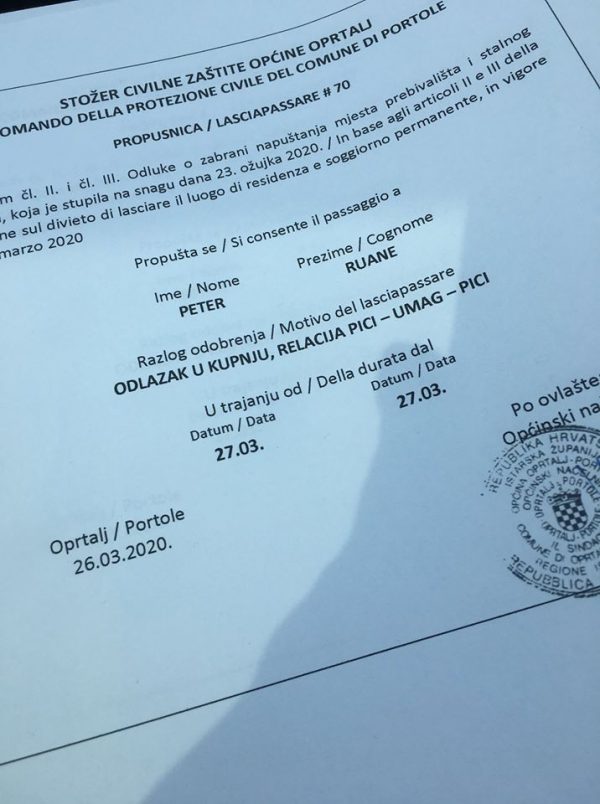 Things happened very quickly in Croatia, as the government responded with speed. By Monday 23rd May, travel restrictions had been introduced. To travel outside of your own municipality you needed a permit – this was quite a simple process and our neighbour helped us with the translation side of things and the permit was emailed back quickly. But, you had to state exact day of travel and purpose and ensure that you took the permit with you as police roadblocks were in place. By the following week, this had become even stricter as only one member of the household was allowed to travel. It was decided that I wouldn’t be that person, as unchecked, my shopping would have consisted of “treats” only 😉 This continued for two weeks, with the local administrative body doing the permits, but as lockdown continued, by mid-April, we had to apply for e-permits which were handled by a higher authority. Again, it was a relatively easy process, but it was becoming very clear that the situation was extremely serious.

So, how’s Lockdown Life been in Istria?

In many ways, not a great deal has changed for us personally. Over the last seven or so weeks, we’ve only left the house to go to the supermarket and to have the cars MOTd. Unlike in the UK, there’s no deferring these annual tests and we had to do both cars last week. We were a bit wary at the thought of being out & about, but as we’ve come to realise, people follow the rules here. There’s no flouting and everything is done by the book. So, it wasn’t anywhere near as risky as we feared – social distancing once outside of the car, one car at a time, hand sanitisers, perspex barriers. And, to be honest, it was nice to be out of the houseand actually see other human beings!

Our house is in a small village, up in the hills in northern Istria. Most of the properties are owned by people who live abroad, so until March/April time, we don’t tend to see a lot of people. Most restaurants around here, don’t re-open until late March/early April, so we live a pretty self-sufficient life anyway, meaning that lockdown hasn’t been a total shock. We’re in regular touch with family and friends and we’ve kept our website design clients, so always have contact with people. Now that we have fixed line broadband, we’ve also got UK TV, so can keep up to date and keep abreast of what’s going on.

We’re lucky that we’ve been able to use lockdown time very productively. Prior to being largely confined to home, we’d decided to sell our house, because we’d found another renovation project and via a website we designed, we’d tentatively started to market it. We’d put in a couple of low(ish) offers, which were rejected, to get the ball rolling on the other property and had a further viewing. It’s all obviously now on hold, but we’re using this time, to get the website completely finished, get the house on external property abroad websites and focus on the last bits and pieces in the house, ready for when we can get going again.

We also completed, just the week before lockdown, on the little property and additional land behind the main house, which will be included in the house sale. As our builder can’t come round to make it safe, we’re chugging along doing what we can to tidy it up. New boundaries have also been established and lodged at the Land Registry, so we’re making plans to fence off the whole house, front and back, to give us more privacy.

Lots of smaller jobs, which have been on a long list, for a long time, are being ticked off. Painting jobs are being tackled. A bit of decoupage has been going on, transforming a couple of doors and some shelving… 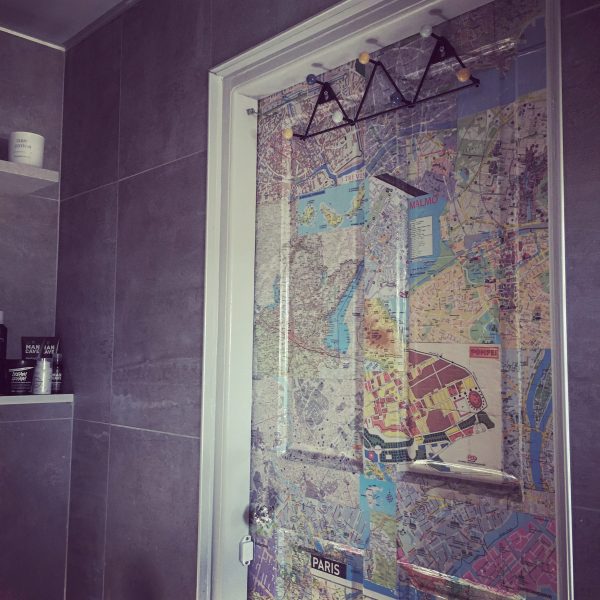 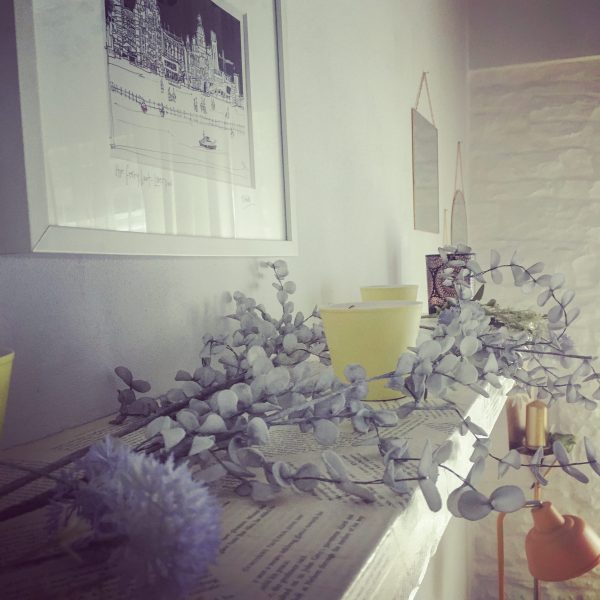 The window sills in the new kitchen have finally been tiled and grouted – a job which was always put off as it inevitably involved the tile cutter, but both windows have been done and they do look great. I also managed to get my “window shelf” – something I’ve been hankering after for while, since spotting something on Pinterest. This was much resisted by the shelf-putter-upper because he said we then wouldn’t be able to open the window. Yes, we would – the shelf could just sit on blocks and be lifted off when we wanted to open the window. He now likes the potential of an indoor herb garden… 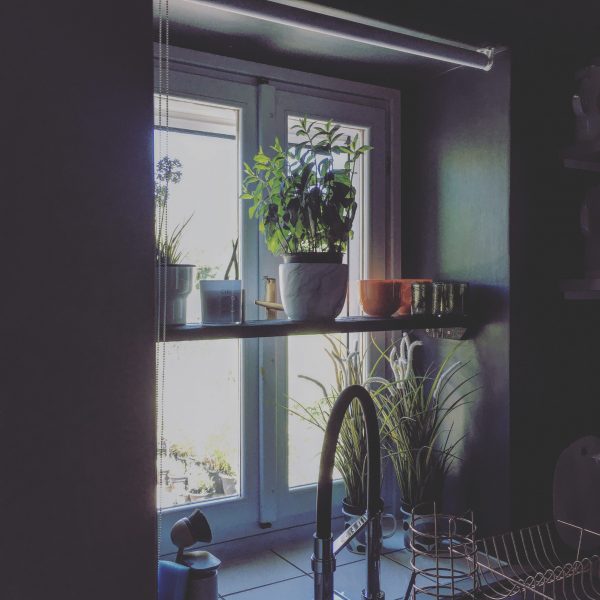 We’ve also rediscovered our kitchen and are now much more likely to ensure that what we buy, we use. I’ve become less likely to discard fruit and veg which maybe doesn’t look as fresh it did when we bought it, and meals are being cooked from scratch. Bread is being baked & we have vegetables and herbs planted up. 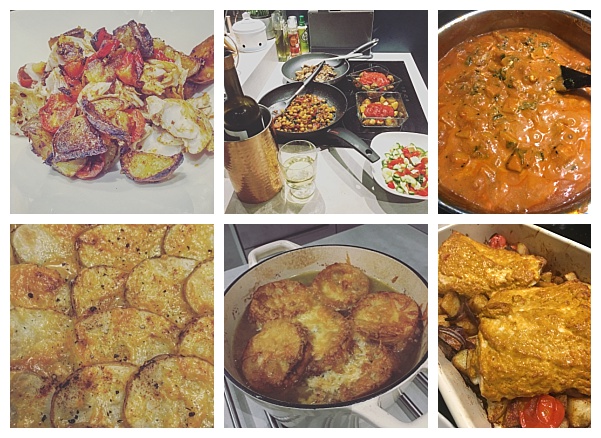 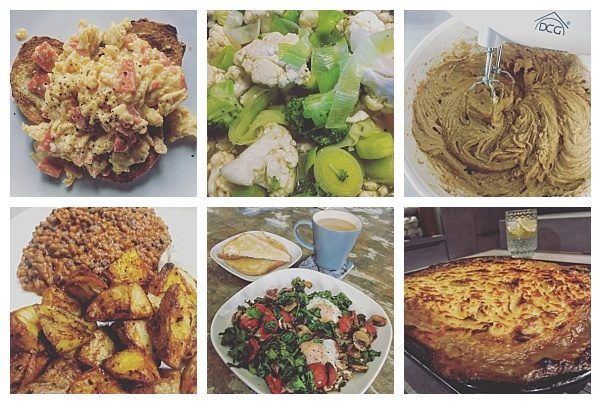 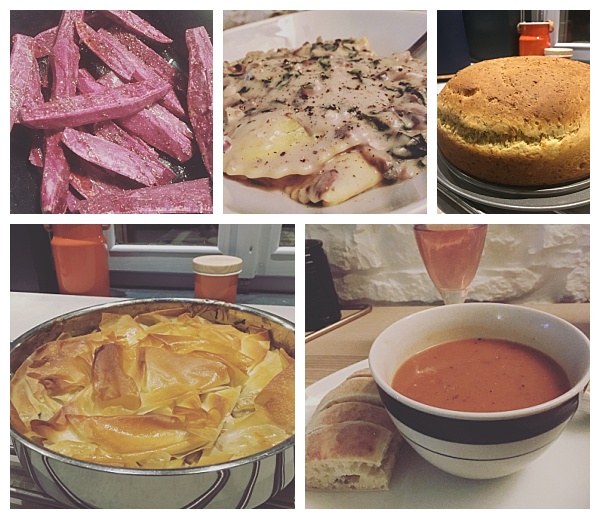 Even though we are lucky enough to still be working from home, we do feel that we have more time to be doing more things for *us*. We’re catching up on films, and series we’ve been meaning to watch but never seem to have got round to. It’s taken us until now to get the brilliance of Peaky Blinders and I’m a bit bereft that we’re onto the last series – but rather than binge watching now, we’re restricting ourselves to two episodes on a Saturday evening. Which is how we know it’s a Saturday.

Earlier this week, we received the news that Istria County has been officially declared Coronavirus free, as no new cases had been reported for the previous 16 days. However, the relaxation of regulations is still measured and controlled. From Monday 11th May, bars and restaurants will be allowed to re-open IF they have outdoor terraces and if social distancing measures can still be maintained. We definitely won’t be rushing off to a local bar or a restaurant, but we are heartened that things like this can start to happen. We are horrified by what we see happening in the UK – and just wish we could transport all family and friends to Istria where it is safe.

So, for us personally, lockdown has been a time for planning and preparing. We know that even though we are in a different country, and a country we are still getting used to, we are very lucky to be here. And, hopefully, one day soon – although goodness knows when that will be – we’ll be able to welcome family and friends to our little slice of paradise, again.