So, the exterior renovation of our house for sale, continues apace. We’ve largely completed the interior renovation – but we never say never – and so our attention has been turned to the garden area around the main house and the little abandoned house to the rear. We’ve been working away on the piece of land next to our neighbour’s field and this is steadily being sown with seeds and planted up with bulbs, so that we will have ongoing colour over the summer, rather than one hit. But today, we’ve decided to begin on another area, just for a change of scene.

This was the very first photo we ever took of this particular piece of land. To the right is the corner of our house and then we have the abandoned property, which was owned by a neighbour. It was held together by the vines and the ivy, part of the roof having collapsed in on itself. The land around was unkempt – full of stones and rubble and strong vines growing underground, as well as weeds. It was a mess. But we had other priorities four years ago… 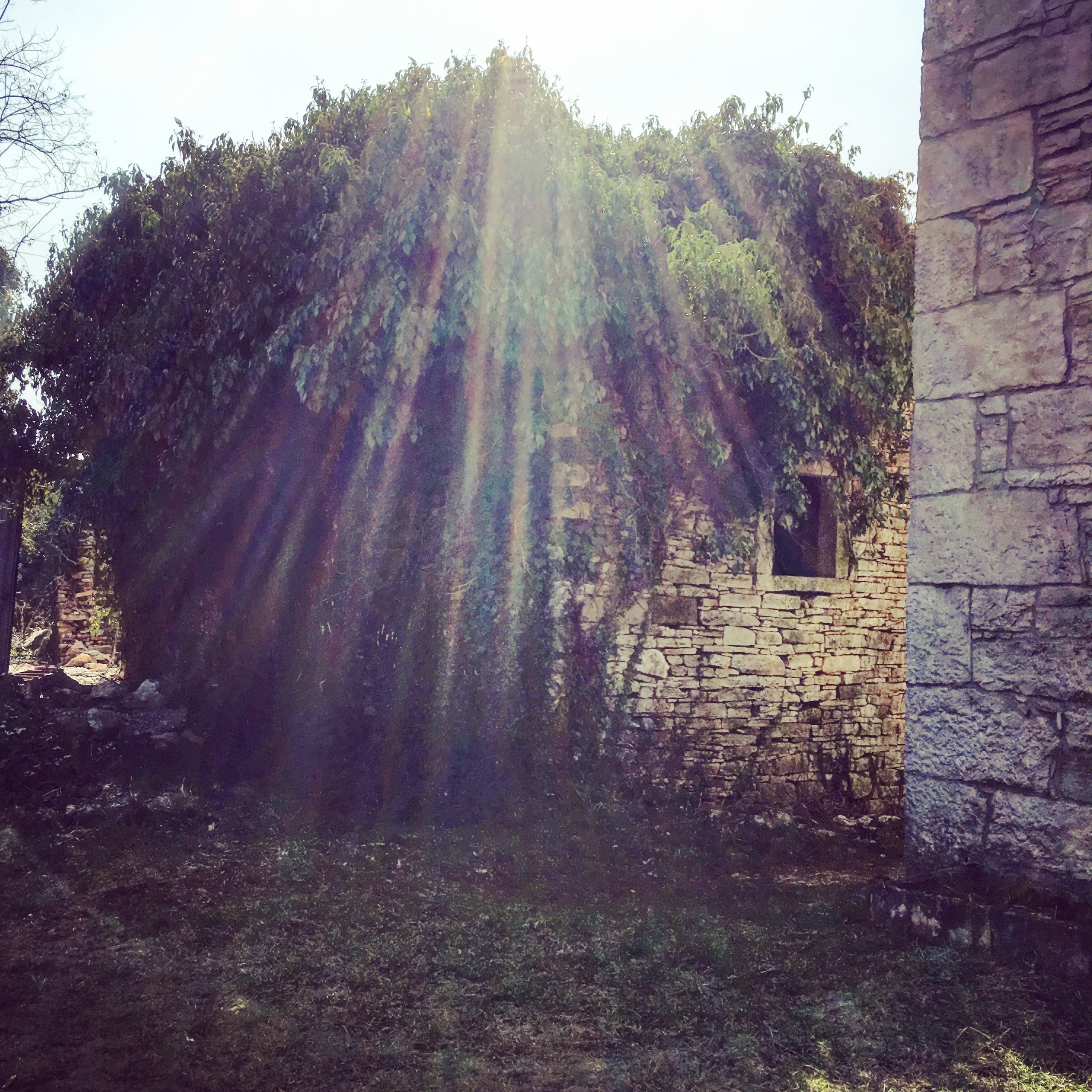 We completed on the purchase of the small house in March 2020, with the land to the other side. The land above, to the left of the property, does not belong to us – it is like a lot of land in Istria. Multiple owners, scattered far and wide, and no-one assuming any responsibility for its upkeep. We were initially very reticent to do anything with any land around the house which did not belong to us, but we have gradually come to realise, if we are prepared to do the work, no-one will raise an eyebrow. And why would they when they have someone else, keeping their land tidy and in good order? We’re sure that many people will think we are bonkers for doing this, but things out here are very different to back in the UK. If nothing is done with land here, it is literally left. It is overgrown. Uncared for. And with pieces of land like this, unless you have the patience of a saint, it’s unlikely it’ll sell as all owners need to agree to the sale. But we didn’t want to have a beautiful house internally and then be surrounded by a scruffy exterior – so when we purchased the small house, the improvements just evolved.

Our first foray into sorting this area was done with our first Workaway guests – Mariuz and Julie, from France. With a head for heights, Mariuz was up the ladder and chopping away at the unruly vines, which in time, would have pulled down the house. It took days to do this, but gave us our first taste of what things could be like and so motivated us to continue.

For the past few months, we’ve made do with the ground being weeded and covered in plastic sheeting to prevent regrowth, and covered in bark chippings. We also bought three fruit trees – two apple and one cherry – and these are potted up. The whole area has looked a lot more cheery, since we added some lights, a few decorative balls and a chiminera. But it still wasn’t quite as lovely as we wanted it to be, without spending a lot of money. We’re not that daft 😉 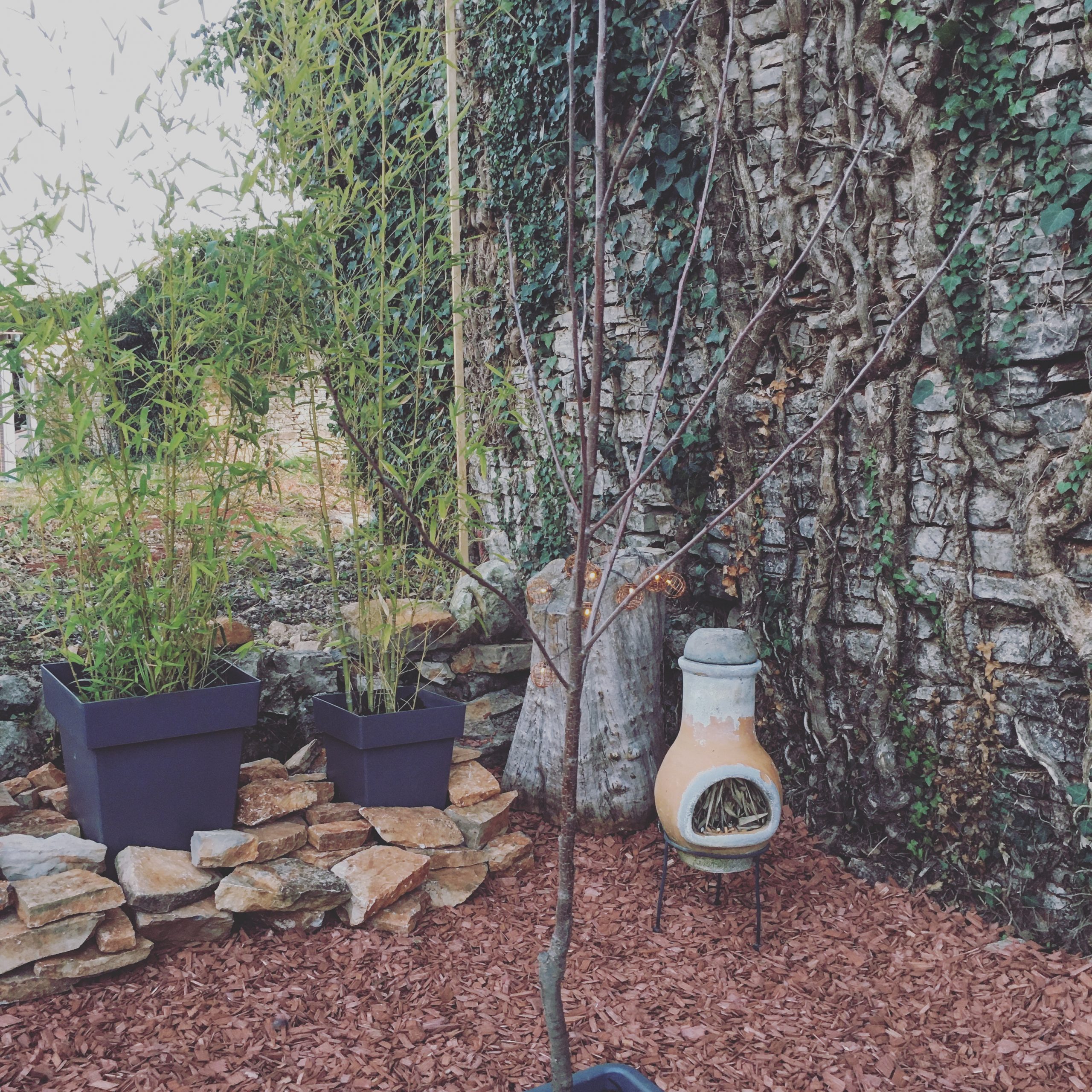 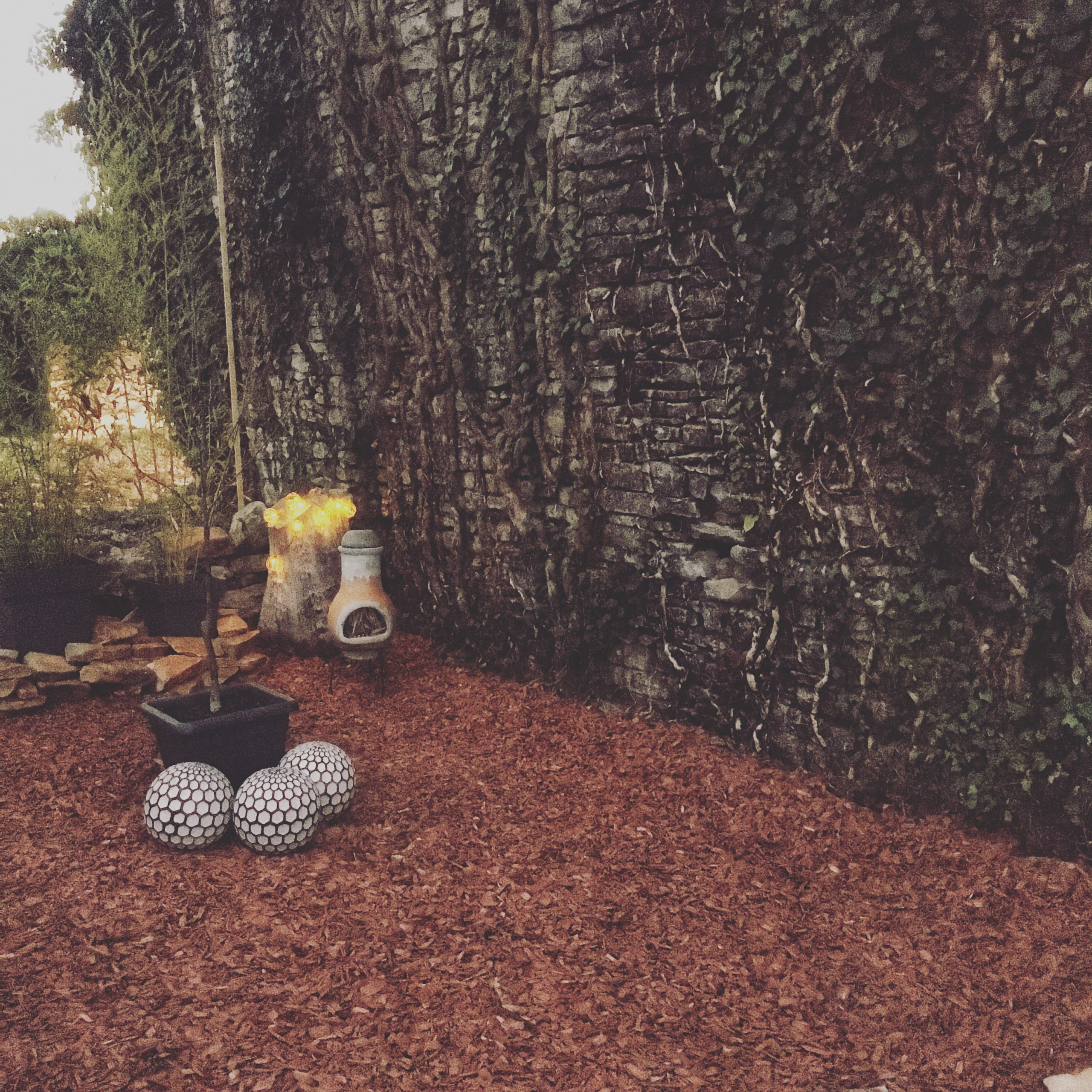 But today – a lovely, sunny March day, quite warm when in the sun – has signalled the start of the next phase of the renovation of this area of the garden. The piece of land just outside of the bark chippings has been dug over and the clumps of grass taken out. The soil has been turned over and levelled out. Before Christmas we laid a bit of a wonky path of flagstones as the grassy ground would just get muddy when it rained – it was done quickly and wasn’t ever right, so that’s now been tackled today. We now have a straight path that runs along side the house and to the rear, so no more getting wet, muddy feet in the rain. A channel has been left between the flagstones and the raised bed under the well room windows (currently bursting with spring bulbs) so that we can sow wild flower seeds, and have a burst of colour in the summer. But, the best bit, has been the inspired laying of a double arc of flagstones – not my idea! – providing a pathway AND a lovely area for sowing more flower seeds, as well as a palette that wasn’t being used, which will now be utilised for potted bulbs.

Our potted fern has always been in the shade, so she’s now been moved centre stage and will benefit from full sun, until early afternoon so may well fare a lot better. The dead fronds need to be tidied up, but we think that the sunshine will do her good. And, our white wrought iron table and chairs, which seem to have been positioned everywhere, now do seem to have found a new home until we get the time to renovate these. Tomorrow, seeds will be sown around the big concrete pot and between the two lines of flagstones, and spring bulbs potted up for the palette platform. Then, it’s onto the other side as we create a natural trellis for honeysuckles, made from thick branches and garden twine, to finally mark out the boundary of our land to the rear, meaning we can bring the potted bamboos to this side of the little house, to thicken out the screen at the top of the piece of land, beyond the vintage garden furniture.

So, it’s coming together, but it’s taking – as ever – a whole lot longer than we anticipated. But at least, we’ve largely finished inside the house and so can concentrate exclusively on the exterior. Oh…apart from the new renovation in Oprtalj, which will hopefully become our one level, open plan, dream home.