When we moved to Istria in 2017, we knew that at some point in the future, the country would be allowed to join the Schengen Zone and there would be no more border checks, between Croatia and Slovenia. And Hungary, but we never cross any of these borders. We kept checking online to check developments and we had some time in 2024-2025 in our heads as the point when things would happen.

Then the Pandemic happened and travel was severely curtailed, for some weeks not being permitted at all, and certainly not cross border. Then in 2021, the UK was out of Europe, and being UK citizens, we were suddenly classified as “third country nationals”, and our Croatian residency had to be renewed again, under the new terms of the Withdrawal Agreement. A knock on effect of this, was that once travel was permitted again, we had to not only show our passports, but we had to have them stamped when we entered Schengen – so when we crossed into Slovenia – and stamped again, when we re-entered Croatia. In the early days, when everything was new, we found ourselves having to ask for our passports to be stamped, as sometimes the border police didn’t seem too clear on the new systems. We had to ask, because if we’d been stamped one way but not the other, the new 90 day rule could have been applied to us, even though we have Croatian residency. It has got a lot easier and we – and the border police on both sides – have become familiar with the stamping process, but it’s still been a bit of a hassle, and has always made us feel a tiny bit worried that maybe we weren’t doing the right thing.

Another issue has been that since January 2021, we’ve not been able to us our nearest border, which is only 10 minutes away, because this is deemed to be for local use only. And because we are “third country nationals” we don’t fall into the category of locals. So, we’ve had to use the main border crossings with Slovenia, which in the winter are OK, as traffic is light, but in the summer have been a nightmare, as thousands of tourists head into Istria, and northern Croatia. We avoided crossing as much as we possibly could for the last two summers, but when Italy is only half an hour away, sometimes we couldn’t resist. Our worst crossing was in July of this year, when we were returning from IKEA – it was blisteringly hot, there was no shade and it took over two hours to travel what would normally take us about five minutes. Schengen membership couldn’t come soon enough, so I was ecstatic when I read that Croatia had finally met the 281 recommendations in the eight areas of the Schengen protocol, the most comprehensive and detailed evaluation yet – and that it would probably only be a matter of a rubber stamping procedure when the EU council in mid-December.

Finally, much sooner than we thought, the decision was made that Croatia would be accepted into the Schengen area, and we spent the last two weeks counting down the days until we knew that we had got over very last stamp in our passports. It all happened at the stroke of midnight 31 December/1 January, and I knew it was real when I saw an Instagram post by our local mayor, shaking hands with his Slovenian counterpart from Koper and a raised barrier.

And, on 4th January 2023, we made our first crossing into Slovenia, without having to show passports or receive exit and entry stamps. The booths, normally with a number of border police, were empty and closed. And signs had been erected, in a number of languages, declaring “Free Passage”. It was an absolute joy to once again be able to drive into Slovenia where the local border crossing point had been in operation until January 1st… 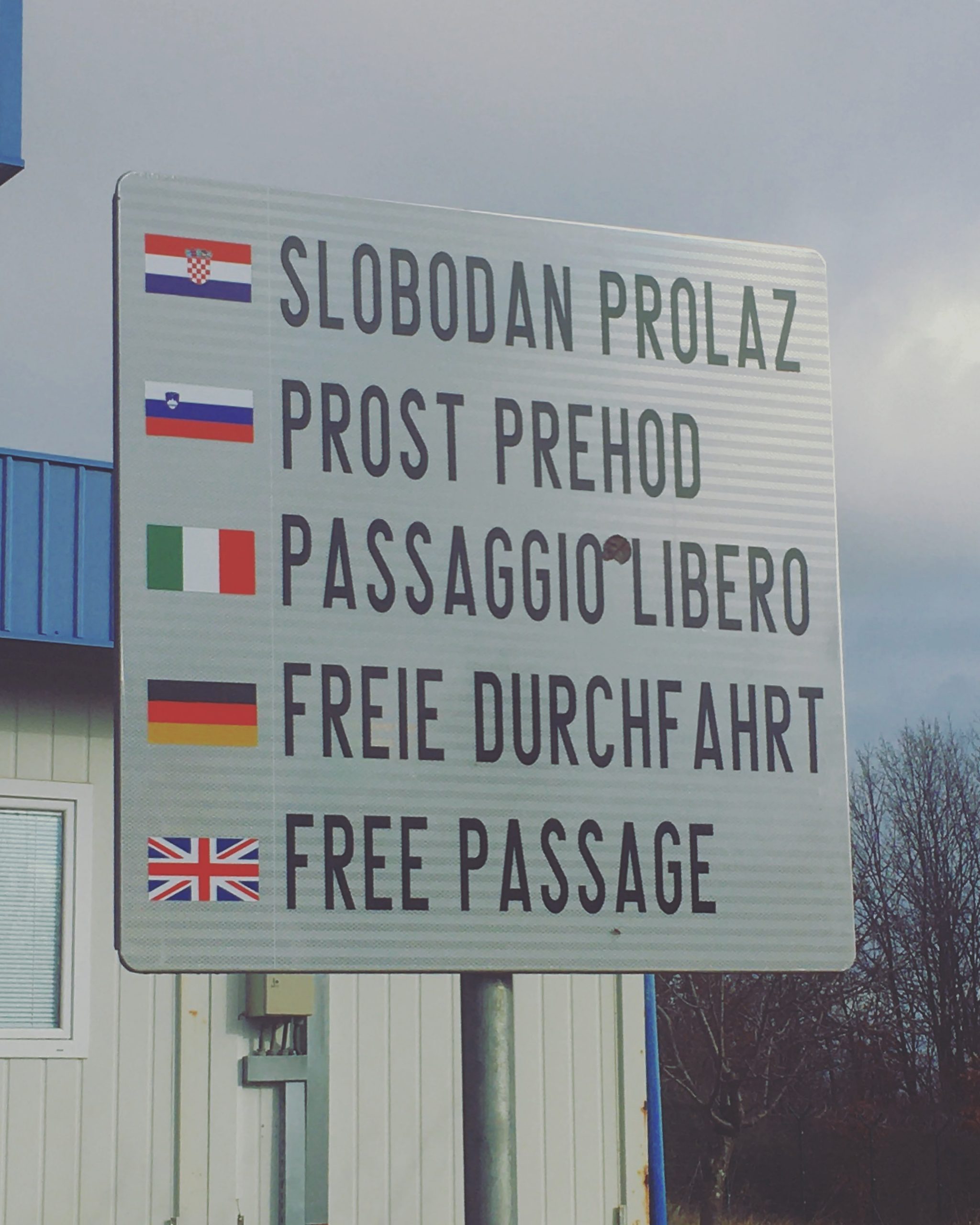 And, on the way back, we drove via one of the larger crossings we’ve had to use for the last couple of years. Open border and free flowing traffic – which will be amazing in the summer! 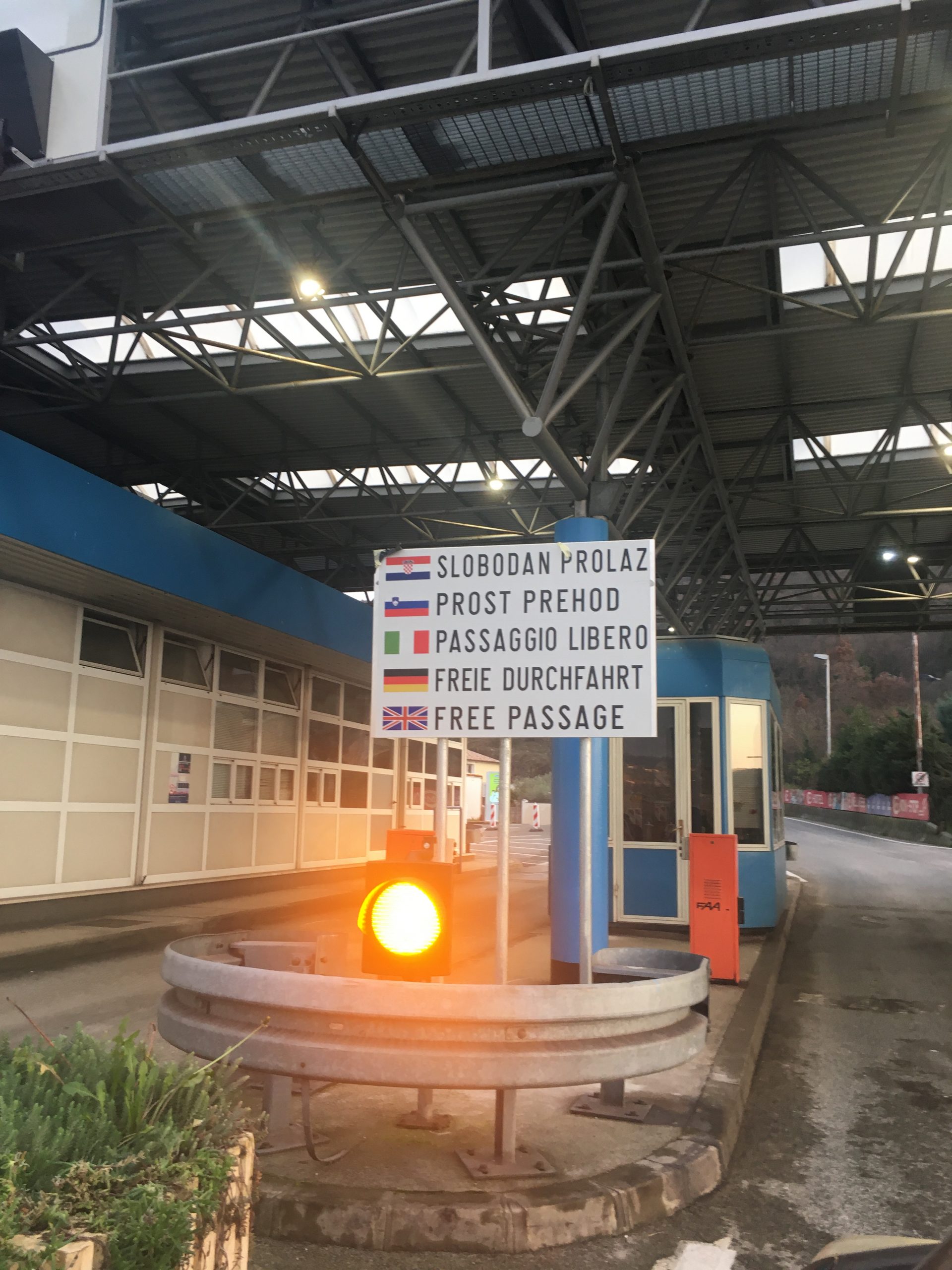